A shock announcement has thrown consensus politics into doubt 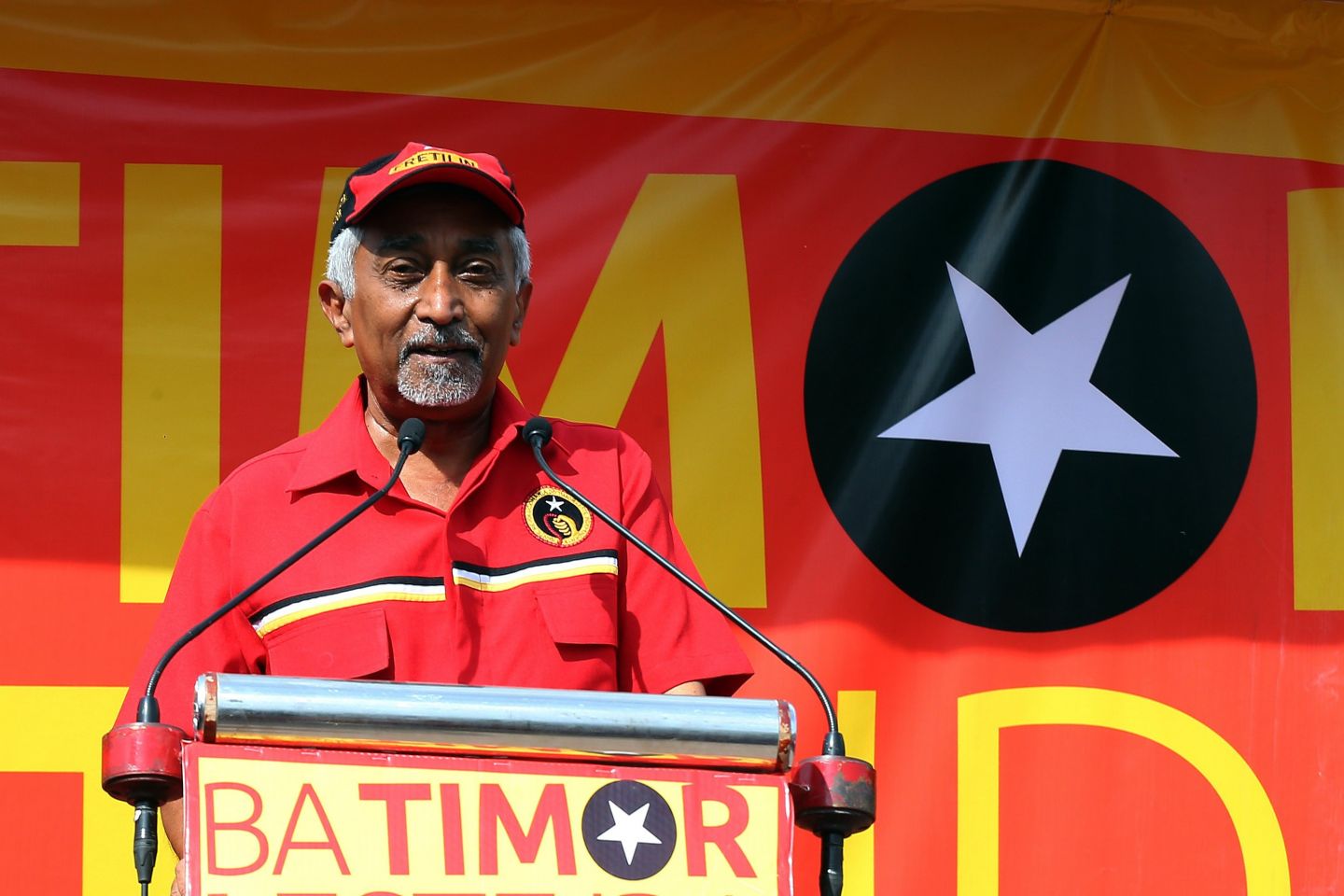 East Timorese politics remain in a post-election limbo as the parties elected to parliament just over a fortnight ago negotiate to form government. Despite early optimism that the broad outlines of a new administration might be known quickly, the recent developments suggest an outcome is at least a week away, and possibly longer. Negotiations have begun in earnest now that the major parties have held conferences to determine their own approaches to the deal-making.

The 22 July election saw the two main parties — Fretilin and CNRT — once again take the majority of the vote, with 29.7 per cent and 29.5 per cent respectively. In a significant twist, Fretilin narrowly beat the previously dominant CNRT, led by former resistance leader and ex-PM Xanana Gusmão, resulting in a slim but important lead of twenty-three seats to CNRT’s twenty-two.

Since 2015, these two major parties have been involved in a de facto power-sharing executive, in which Fretilin provided ministers to a CNRT-led government. A new party, the PLP, led by the immediate ex-president Taur Matan Ruak, performed well to secure eight seats, and quickly asserted that it would serve as the active parliamentary opposition that Timor-Leste has lacked since 2015. Two other parties entered parliament, the longstanding Democratic Party, or PD, with seven seats, and a newer party, Kmanek Haburas Unidade Nacional Timor Oan, or KHUNTO, which aimed its campaign at disaffected younger voters, securing five seats.

The rise of the PLP and KHUNTO reflects important demographic shifts, with new voters now comprising a full 20 per cent of the roll, even as the two major parties continue to dominate. With neither party securing a working parliamentary majority of thirty-three seats, government will be formed in inter-party negotiations.

Having lost eight seats since 2012 to fall narrowly behind Fretilin, the CNRT congress last weekend was a less than happy affair. The giant of East Timorese politics, Xanana Gusmão, had been openly disappointed with the result and, in a dramatic development on Friday, announced his resignation as president of CNRT and declared that the party would go into opposition. This announcement challenged the widespread assumption that the power-sharing arrangement between the two major parties would continue, leading to media claims of “disarray” in the formation of government. José Ramos-Horta was quick to contest this assessment, rightly noting that there were other paths to stable government, and that negotiations were only commencing.

By Sunday, the CNRT congress had suspended Gusmão’s resignation pending an extraordinary congress to be held later, meaning in effect that Gusmão remains party leader. Nonetheless, the declaration that the party would head to opposition has raised the stakes considerably, upsetting expectations that the consensus politics of the last two and a half years would continue — expectations reinforced in the electorate’s mind throughout the recent election campaign, in which the major parties largely refrained from attacking each other and concentrated on their record of bringing political stability to a country wracked by political crises only a decade ago.

Should CNRT hold to this position, Fretilin’s options narrow to more difficult paths of negotiating with smaller parties for a thirty-three-seat working majority, or trying to advance a minority government, supported by an “incidencia parlamentar,” a Portuguese term for confidence-and-supply arrangements with minor parties that do not formally join the government. But Fretilin hopes to form a government of “grand inclusion” incorporating members of other parties, and has now scheduled talks with all the smaller parties this week. The CNRT’s position, as it stands, certainly makes it more challenging to form a majority government.

For its part, PLP has previously stated a desire to stay in opposition, adopting the strategic view that this will maximise its electoral chances in 2022. There is debate within the party, however, between the older veterans, including Ruak himself, and younger Dili-based intelligentsia, with the latter more open to participation in government. All elements are understood to have an open mind about the coming negotiations, and might be prevailed upon to offer confidence and supply to a new government, rather than formal power-sharing. It is also possible that any genuine prospect of instability may alter the party’s present calculus.

With its seven seats, PD is understood to be split over which major party to back, but with the bulk of the party likely to favour CNRT, as they have since 2007. By contrast, KHUNTO is likely to deal with any major party that can offer it ministries and secure it influence over the youth issues that drove its vote. This balance of forces leaves Fretilin with an uncertain path to thirty-three seats.

The new president, Francisco “Lú-Olo” Guterres, himself from Fretilin, will now have a key role in encouraging the formation of a government. As the most voted-for party, Fretilin will be given first opportunity. If it cannot command a majority on the floor of parliament, it can present its government program as a minority government. Should that program be rejected twice by parliament, the president can then turn to the CNRT. It is not clear that the CNRT could command thirty-three seats, though it is certainly possible, and the prospect gives Gusmão bargaining strength. But the prospect would also raise relatively unpalatable memories of the post-crisis era of 2006–07.

The outcome of this week’s negotiations is therefore uncertain. One clear possibility is that the era of national unity that characterised the period from 2015 is over, or at least under serious threat. Another is that we are witnessing an elaborate game of double bluff as the two giants of East Timorese politics, Fretilin and Gusmão, circle around the prize of government and seek to improve their respective bargaining positions before striking a deal. Parliament is due to sit first on 21 August, and the president will be keen to see a deal for government settled by that time, though it is not, in practice, a hard deadline if negotiations are incomplete.

Looking ahead, the risks for Fretilin in establishing stable government without the support of the key figure of Gusmão are clear enough. While acknowledging the CNRT conference’s recent resolutions, Fretilin leader Mari Alkatiri last night reiterated his desire to meet with Gusmão, the “inescapable” figure of Timorese politics who “cannot be left out.” Alkatiri also noted that the Fretilin program is not “a sacred text.” Notably, the party has deferred a decision on whom it will nominate as PM until after negotiations with the parties. The party conference did, however, confirm that the prime minister would come from Fretilin itself, a position that could prove a stumbling block to the CNRT, and may need to shift to facilitate good-faith negotiations.

Having supported a Fretilin president in 2017, and facilitated the rise of Fretilin PM Rui Araujo in 2015, the CNRT will expect substantial and senior positions now the tables are turned. These may include the prime ministership itself. Herein lies the real possibility for national unity to falter.

Certain risks also face the CNRT. As a classic “party of power,” it is not especially well-suited to opposition, at least not for long. It is notable that the senior party figures, including Gusmão himself, are not taking up their parliamentary seats, raising the question of how and where the commitment to parliamentary opposition will be enacted. Obvious paths back to power include striking a new deal with Fretilin, or leading a non-Fretilin alliance, as in 2007. A third option involves establishing a non-Fretilin alliance, then inviting Fretilin to join a renewed power-sharing arrangement from a position of relative strength. While Gusmão’s relatively poor current relationship with Ruak somewhat diminishes these prospects, they remain possibilities.

While these prospects may excite commentators, hardball tactics from either major party may not be welcomed by an electorate that recently voted for a continuation of Timor-Leste’s consensus politics. The stakes for both major parties are therefore high: having advertised a product called political stability, they may suffer electorally if they do not deliver it. There is also a strong sense in Dili that “it is no longer 2007,” a reference to the political crisis of that era, which saw dangerous rifts within the East Timorese political elite lead to the re-entry of foreign peacekeepers. Though there is no prospect of a return to those times, any political tactics reminiscent of that era may prove deeply unpalatable to voters in the wake of an extended period of national unity, even if they remain constitutionally acceptable.

At the same time, East Timorese politics is in transition. In focus groups I conducted in Dili with young voters before and after the July election, many argued that while political stability remains the key issue for their older relatives, who experienced the great turmoils of East Timorese history, younger voters are more interested in transparency and accountability. These factors explain the ongoing — but now reduced — popularity of the two major parties, and also the rise of new political challengers in PLP and KHUNTO.

From an Australian perspective, Canberra will clearly welcome the prospect of a shake-up in the government in Dili, as relations have been at a low point in recent years. It is notable, however, that Mari Alkatiri last night explicitly affirmed that Xanana Gusmão would continue to lead the maritime boundary negotiating team in any outcome, demonstrating that, even now, certain fundaments of East Timorese foreign policy remain stable.

Also significant is the fact that the powerful US House Armed Services Committee’s recent National Defence Authorisation Act for 2018 was specifically amended to encourage resolution of the maritime boundary dispute between Australia and Timor-Leste. There is little question that this shift in Washington signals extra pressure on Canberra to resolve the matter in the current UN Convention on the Law of the Sea conciliation process, due to conclude in September.