The state of play, the states to watch, and how the count will unfold 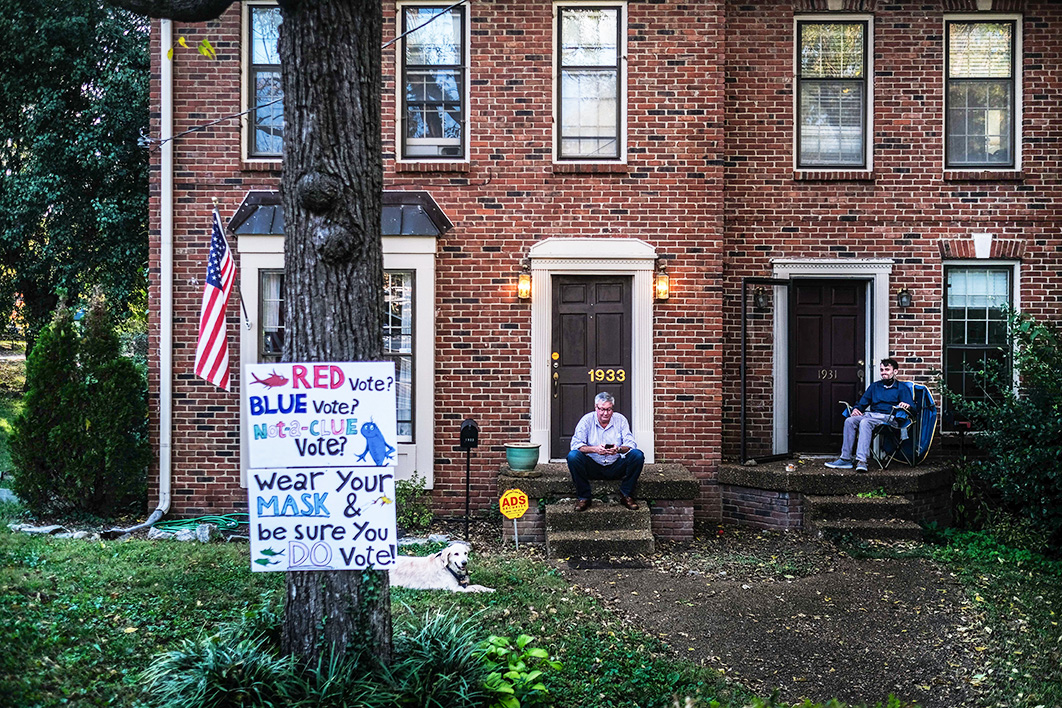 Twelve days from the presidential election, leading American polling analysts at FiveThirtyEight give Joe Biden a ten percentage point lead over Donald Trump, 52.1–42.2. The other leading aggregator, RealClearPolitics, has the race somewhat closer, 50.6–43.0, giving Biden a still-comfortable lead of just under eight points. Neither site has detected anything more than a slight tightening of the race in recent weeks.

Electoral college votes are distributed very roughly according to population among the fifty states and the District of Columbia. In all but two cases (Maine and Nebraska), college votes are allocated on a winner-takes-all basis to whichever candidate wins a majority of votes in a particular state.

Below is an alphabetical listing of states, with the second column showing the number of electoral college votes each of them is allocated. The third column shows who won the state in 2016 — red for a Republican victory and blue for the Democrats — and the last column gives the polling as at 21 October 2020, aggregated by FiveThirtyEight, also colour-coded. In both cases the margin is in percentage points — to one decimal place when margins are close and to whole numbers where the margin is larger. 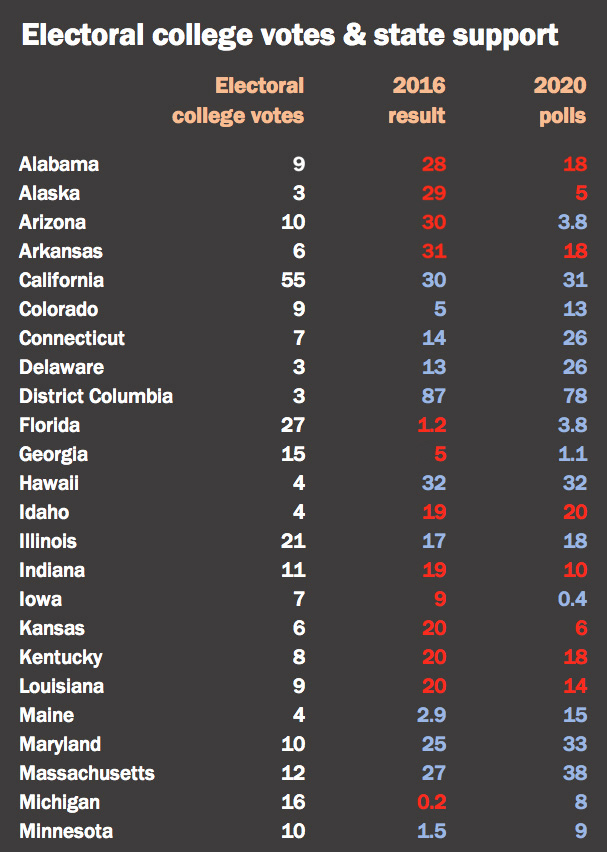 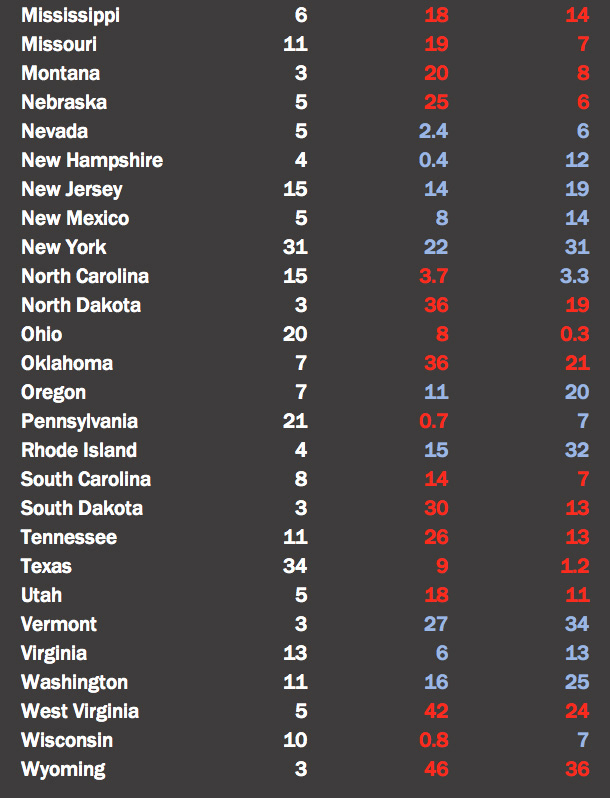 Biden is leading in all of the twenty-one states the Democrats won in 2016, and mostly by a bigger percentage than Clinton attracted. Her narrowest victory in 2016 was in New Hampshire, which she won by just 0.4 per cent; Biden currently leads that state by twelve points. The two most marginal states for Biden among the twenty-one are Nevada (six points ahead) and Minnesota (nine points ahead), and in both cases the margin has been very consistent.

Almost certainly, none of the states that voted Democrat last time will go Republican this time. Biden therefore begins with a minimum of 232 electoral college votes.

Trump leads in twenty-two of the states the Republicans won in 2016. Several have swung away from the incumbent, though Trump is still ahead. The two closest are Ohio (where Trump is winning by 0.3 percentage points) and Texas (1.2 points). These states carry twenty and thirty-four electoral college votes respectively, so the stakes are high.

Even in those two closest states, Biden has been ahead in the polls only sporadically and momentarily. If they have not swung away from Trump yet, it is unlikely they will do so by election day. So the best guess is that all will remain Republican, although Ohio — often seen as the bellwether state, though it now tends to be more Republican than the country as a whole — should be watched closely.

This leaves the eight states that are likely to decide the election, all of which returned a Republican majority in 2016 but now have Biden leading. They include the three Midwestern states — Michigan, Pennsylvania and Wisconsin — that gave Trump victory in 2016 with margins of less than one percentage point. Biden is seven or eight points ahead, and consistently so, in all three. Victory in those states alone would carry him past the magic 270 number that means victory.

The next two states to have polling most consistently in Biden’s favour since April are Arizona (a 3.8 point margin) and North Carolina (3.3). North Carolina has fluctuated more, and so is the more doubtful victory for Biden.

The most marginal of all Biden’s polling leads is in Iowa, which has been tight for some time, but often with Trump ahead. Georgia has also recorded a narrow margin and fluctuating polls. It would be foolhardy to predict who will win these states.

Florida has not been kind to the Democrats in the twenty-first century. Although Obama won narrowly there both times, the Republicans have taken that state in the other three elections since 2000, and it gave George W. Bush his first victory. Biden has a lead of almost four points, and Trump has not led there since April. Nevertheless, individual polls from Florida seem to vary more widely than most, and it has a reputation of being hard to predict.

Normally the US presidential result becomes clear around lunchtime on the day after the election, Wednesday, Sydney time. A few small states (Indiana and Kentucky) close their polls at 9am Sydney time. Exit polls will be reporting from mid-morning.

Meaningful official figures normally start becoming available in the late morning, but viewers shouldn’t expect an Antony Green–ABC level of sophistication in calling the count. Often, for example, it isn’t clear whether figures are coming from rural or urban parts of different states.

On top of that, the unusually high number of early voters and postal ballots will make predicting from early results hazardous. We do know that Democrats, wary of both the pandemic and Republican attempts to disrupt election-day voting, are more likely to cast their ballots this way — which may, among other things, affect the value of exit polls.

Because American elections are governed by state and county rules, early votes and postal ballots are counted at different times in different parts of the country. The overall result might not even be clear on the night, and that delay will allow accusations of foul play to flourish. But if all the swing states are clearly going early to Biden then his margin in the electoral college may be as strong and unchallengeable as the latest national polls suggest. •

“We are just waiting. We are always waiting”

Will ending Melbourne’s lockdown trigger more of the refugee evictions initiated by the federal government? 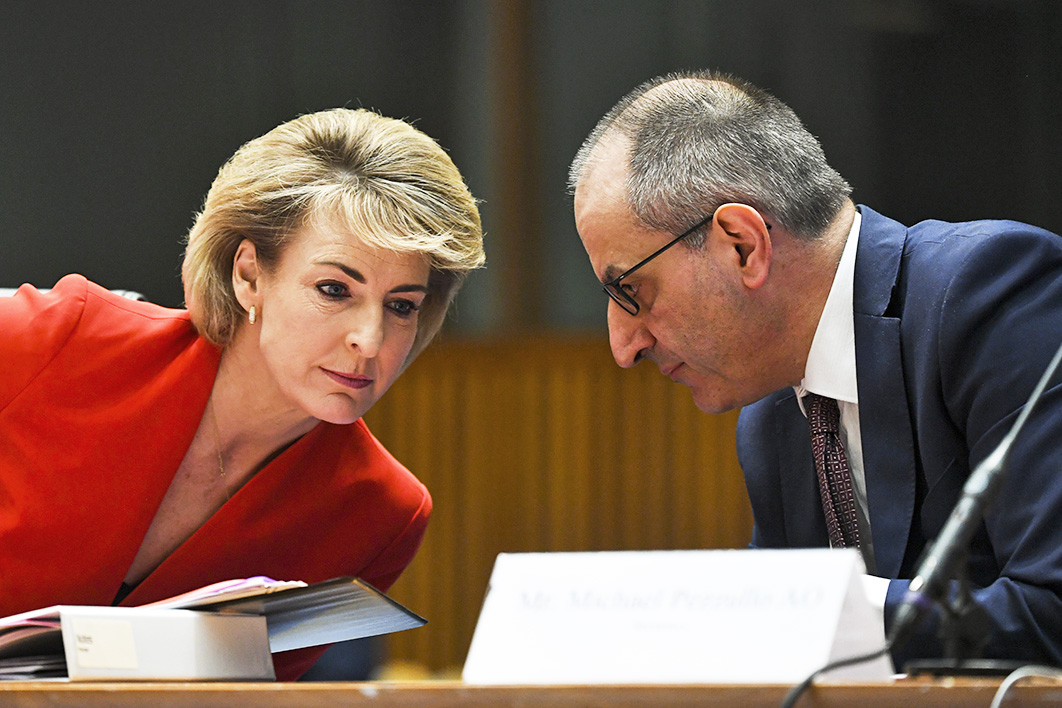