The long festival of democracy took Kerry Ryan to – where else? – Old Parliament House 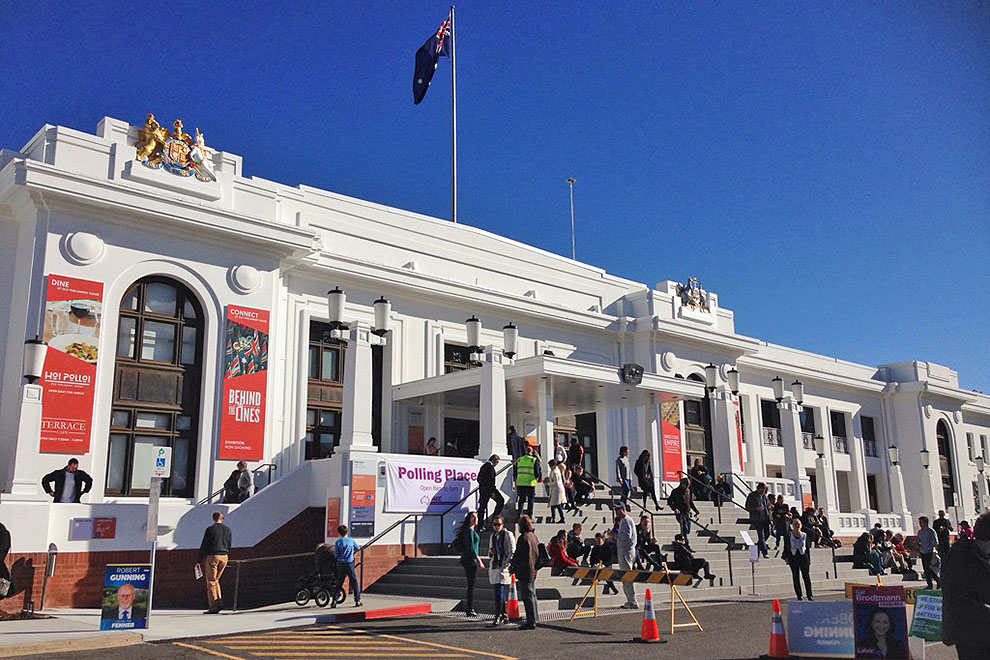 Canberra isn’t a city that looms into view as you approach it by road. You don’t get the sort of tantalising glimpses you do when you head into Sydney or Melbourne, for example, no Sydney Tower–like construction poking up over the trees to distract bored children, no Eureka Tower to draw your gaze to the skyline. Instead, you emerge from between a load of paddocks and arrive.

This time I arrived on the eve of the federal election. That was Malcolm Turnbull’s idea. The original plan was to spend the school holidays visiting friends who’d relocated from Melbourne to take up a job at the Australian National University. It’s a common story in Canberra. The ANU has been buying in smart people since it opened in the 1950s.

Before I left Melbourne I was telling people I’d be in the capital on election night, when the verdict came down. Instead, it’s been a little bit like my kids were in the back of the car for most of the drive. Are we there yet? Well, finally, with Bill Shorten conceding, it seems we just might be… sort of… almost… just a little bit longer. How about another game of “I spy”?

I first visited Canberra in the late 1980s when Parliament House, the new one, was straight out of the box. And it showed. I remember the tour guide as the proud type, beaming like a child at Christmas as she trotted out a list of impressive statistics about concrete and marble, and unprecedented feats of engineering and logistics.

I’ve been back and forth to Canberra for various reasons over the years, but like everybody else, it seems, most of the time it’s been for work. The Australian Bureau of Statistics says around a third of the ACT’s workforce is employed by the Commonwealth. After I spent a few days traipsing between national institutions across large open fields, it seemed fair to assume that a significant chunk of them are in the lawn-mowing department.

Canberra, and the ACT, took a while to get going. Named as the Federal Capital Territory in late 1909, its development was slowed down early on by the first world war. The federal parliament eventually moved there from Melbourne in 1927, with just enough time to get settled in before the Great Depression hit.

It wasn’t really until the late fifties and the sixties that Canberra got moving. In 1973, at last, people surpassed sheep as the most numerous inhabitants. Forty years later, the ABS reported that “the gap between the two counts has continued to widen in people’s favour to the present day.” The best thing about that statistic is we’re still counting the sheep. In any case, if they are considering a comeback any time soon, “the best-lit paddocks in Australia” look good to go.

While I’d taken the early voting option back in Melbourne, our Canberra hosts were using the traditional approach. Election morning was crisp and clear, with the temperature nudging minus 4. With a forecast of minus 1, the deficit was bigger, fittingly enough, than expected.

At North Ainslie Primary School, Christina Hobbs, the Greens Senate candidate for the ACT, was out braving the cold distributing how-to-vote cards. Ultimately, it would turn out to be a long and fruitless day for Hobbs. As the ACT Senate count winds down, the Greens are tracking to record a sizeable swing in the wrong direction.

With two of us planning to vote in style, we headed off to Old Parliament House, where they were expecting six thousand people with a sense of history to exercise their democratic right. Gough Whitlam once described it as a building devoid of any architectural distinction, and if anyone had earned the right to a critique it was Whitlam. He’d moved to Canberra as a schoolboy in 1927 when the place was opened and returned in 1952 to spend twenty-five years working there as the member for Werriwa.

Despite Gough’s assessment, if you’re into wood panelling and tight corridors this is the place for you. Now home to the Museum of Australian Democracy, it’s also a place for history buffs. After all, its walls and halls bore witness to sixty years of government spanning the Great Depression, the second world war, Korea, Vietnam and the cold war, as well as Whitlam’s dismissal in 1975.

I steered the children around for a couple of hours, wandering in and out of long-vacated offices, many of which had been carefully preserved, right down to open soft-drink cans and open diaries from the 1980s. As I checked out the prime ministerial suite, last occupied by Bob Hawke before the house moved up the hill in 1988, I lost sight of my daughter and her friend. I found them not long after in the cabinet room, alone but for each other, sitting up at the cabinet table doing word puzzles. They weren’t the first to sit at that table with a problem in front of them.

We took a break in the old Senate chamber, where the children found the comfortable red leather benches to their liking. As I sank low into a chair across the aisle from where the Tasmanian senator Brian Harradine used to sit, I imagined how difficult it must have been to stay awake at times, particularly after a long lunch.

I knew I was sitting across from Harradine’s old chair because the lady who was now sitting in it told me so. She was a tour guide who’d been working there since about 1980, so she said. She also said that Harradine was a prickly type. That wasn’t exactly news; barely three minutes of research into Harradine will tell anyone that. And then she said what everybody says when describing Harradine: “But he got a lot for Tasmania.” Indeed he did.

By the time we left Old Parliament House, we’d spent half a day within its walls. As I exited the building and stood on the spot where, more than forty years earlier, Gough Whitlam had delivered his famous broadside to John Kerr and his “cur,” Malcolm Fraser, I noticed that the line-up for the Rotary Club of Tuggeranong’s sausage sizzle was almost as long as the one inside to vote.

I didn’t join it though. I’ve long considered the cheap sausage to be a pyrrhic victory of sorts. You know the one: where the losses are so great on the path to the win that the win itself is fraught. That has an ominous ring to it, actually. It sounds like the sort of thing Malcolm Turnbull might just have experienced. •