Regrets? We’ve had a few

Have we been missing the prime cause of the leadership instability that set in ten years ago? 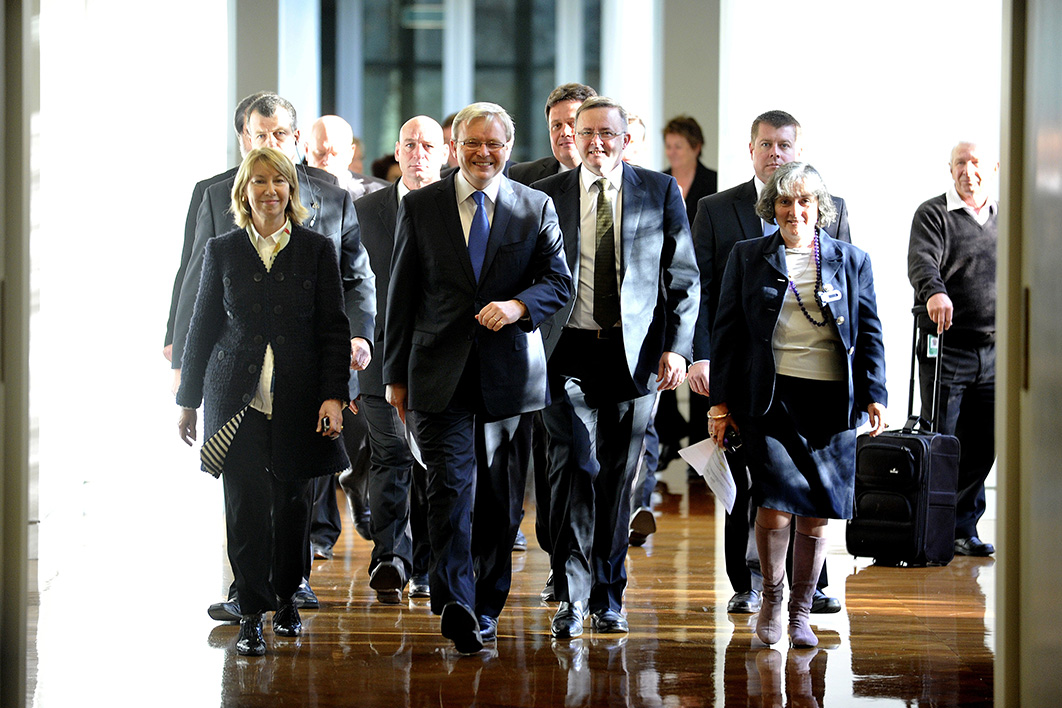 Ten years ago a federal Labor government toppled a first-term prime minister. It was ahead in the polls and an election was due within months.

Oh, and they replaced him with Julia Gillard, who, for all her undoubted attributes, was afflicted by woeful political judgement.

Like many a political assassination, it relied for momentum on the media, but whereas the usual chip-chipping away involves weeks or months of “sources revealing” diabolical internal polling and shifting party-room numbers, this one took just a few short hours. Straws in the wind over the previous week aside, the first most caucus members knew of an actual challenge was a leak to ABC2’s evening news on the night of 23 June.

But the dynamic was roughly the same as usual: we’re doing this thing whether you like it or not; the leader is finished even if he survives this time; best make it quick and clean. And that imminent election focused minds.

Certainly, Kevin Rudd had tilled the soil by alienating so many of his MPs and running an office where decisions famously went there to die. That tendency to subjugate all to the news cycle, that political timidity bordering on paralysis and that preference for fluff over substance — all were evident back in his first year, before the global financial crisis gave him something to get his teeth into.

But ultimately the fault for the change-of-leader debacle and the painful 2010–13 term lies with the machine men who engineered the leadership change, those clipboard holders who knew everything about the latest polling and understood nothing about what motivates voters. Today, naturally enough, they claim to have zero regrets, as they told Phillip Coorey in Saturday’s Financial Review. (My own contribution back then in these pages has, I think, stood the test of time.)

It’s little remembered how popular Gillard was as deputy prime minister. Warm and charming, unlike her clinical boss, but also verbally dexterous, just like him. And adored not just by the party faithful; conservative commentators quite liked the cut of her jib.

And as prime minister she enjoyed a stupendous honeymoon. The press gallery cooed, surveyed voters jumped on board — boy oh boy, the Coalition was in for a hiding. Received wisdom is that the leaks destroyed her; but an alternative view is that a deliberately content-free strategy, expecting people to forget about policy, their mortgages, their jobs, government debt and deficit, and vote for Labor because they loved the leader, was destined to collapse. Projectiles from a deposed leader would not have dented a prime minister with authority.

And so, in the words of the BBC’s Nick Bryant, Canberra began its rise to coup capital of the democratic world. Three more victims followed: Gillard herself in 2013, for a returned Rudd; Tony Abbott in 2015; and Abbott’s vanquisher, Malcolm Turnbull, in 2018. As with real coups (think of our neighbour Fiji), once precedent is broken the unthinkable becomes the imaginable.

But was that really the case here? Was June 2010 the cause of the subsequent instability?

We can certainly trace Rudd’s 2013 revenge back to the original act. In many ways, one could not have happened without the other: it was presented as righting a wrong.

But did the virus jump the aisle, or did it arise independently in the Liberal Party? We could say that June 2010 produced, eventually, that historical oddity: an Abbott prime ministership. How does a person so obviously ill-suited become leader of a government?

I believe Labor would have easily won the 2010 election under Rudd, and a consequence of that would have been Abbott’s end as opposition leader. Abbott was so bad, he had to go. But the September 2015 decapitation in turn facilitated Turnbull’s demise three years on: what was good for the goose was good for the gander.

Looked at through the rise and fall of Abbott, it all does flow from that decision a decade ago.

But there’s more. Governing in the post-GFC world is simply more difficult than it used to be. That also applies in other comparable countries, but here we have an additional hurdle: the Senate. In our songs about heroes of the past, how they don’t make ’em like that anymore, we tend to forget that the Hawke and Howard governments enjoyed sublimely cooperative upper houses by today’s standards.

If either of them got the centrist Democrats on side then the deal was done; and Howard enjoyed other routes to a Senate majority, too, such as Brian Harradine and Mal Colston for most of his first term. And, of course, that government upper house majority in his final one.

Compare that with what came after November 2007. The newly elected Rudd government faced a Coalition-controlled upper house for seven months, and from July 2008 had to get the Greens plus Nick Xenophon plus Steve Fielding to agree to pass legislation (assuming the Coalition opposed).

From 2011, Gillard only needed to convince the Greens, but that wasn’t the picnic it appeared. The necessity of Adam Bandt’s support in the lower house meant that legislation that reached the Senate generally sailed through. It created the impression of a hassle-free life, but the government was suffocated policy-wise by its reliance on the far-left minor party.

Space doesn’t allow a full description of the madhouses that followed, with the largest crossbench coming after Turnbull’s 2016 double dissolution. Since July 2019, though, the equation has slightly improved for the Morrison government: to build a Senate majority it needs either Labor, or the Greens, or (get out your pen and napkin) three votes out of: One Nation’s two, Centre Alliance’s two and Jacqui Lambie’s one.

Our upper house is arguably the most powerful among the planet’s national parliamentary systems. As elsewhere in advanced democracies, major-party support continues to decline and proportional representation will see a growing crossbench in coming years.

Had the Rudd government successfully legislated for its emissions trading scheme, mandated at the 2007 election but opposed by a majority in the Senate, June 2010 would have been just another cold, empty Canberra month.

The Senate is an unsung cause of our coup culture. And it’s not going anywhere. •

A better life on Mars

“Grinding wheels, clanging bells”: Collins Street, Melbourne, in 1889, as engraved by Melton Prior for the Illustrated London News. State Library of Victoria 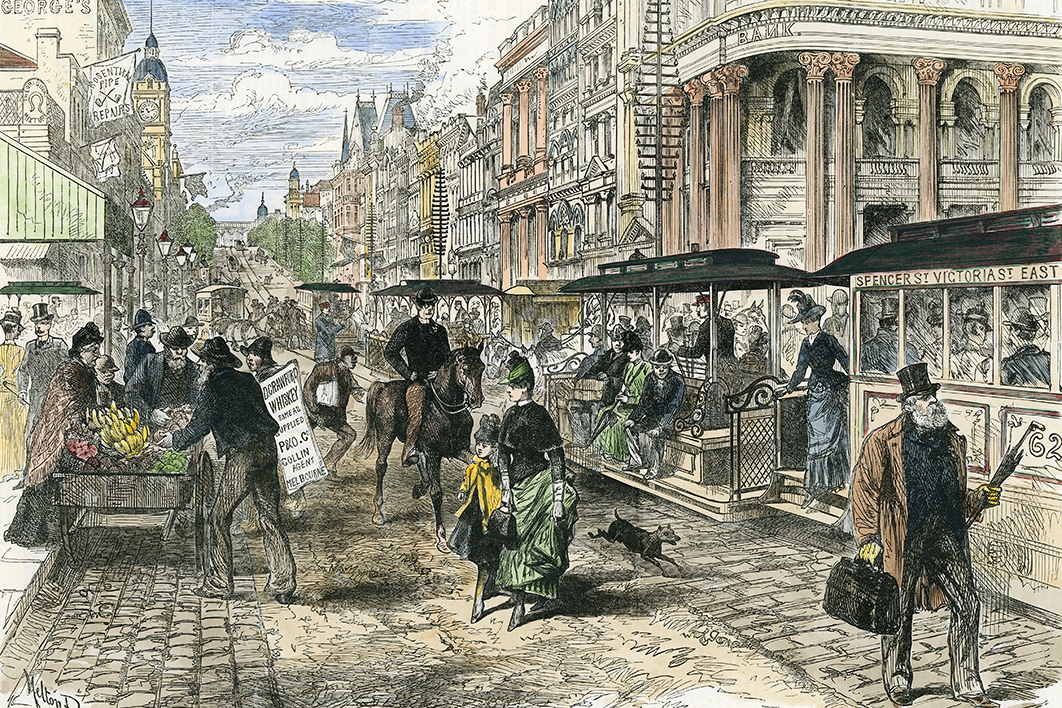 “Grinding wheels, clanging bells”: Collins Street, Melbourne, in 1889, as engraved by Melton Prior for the Illustrated London News. State Library of Victoria