In what’s likely to be a punishing campaign, Kamala Harris ticks all the boxes 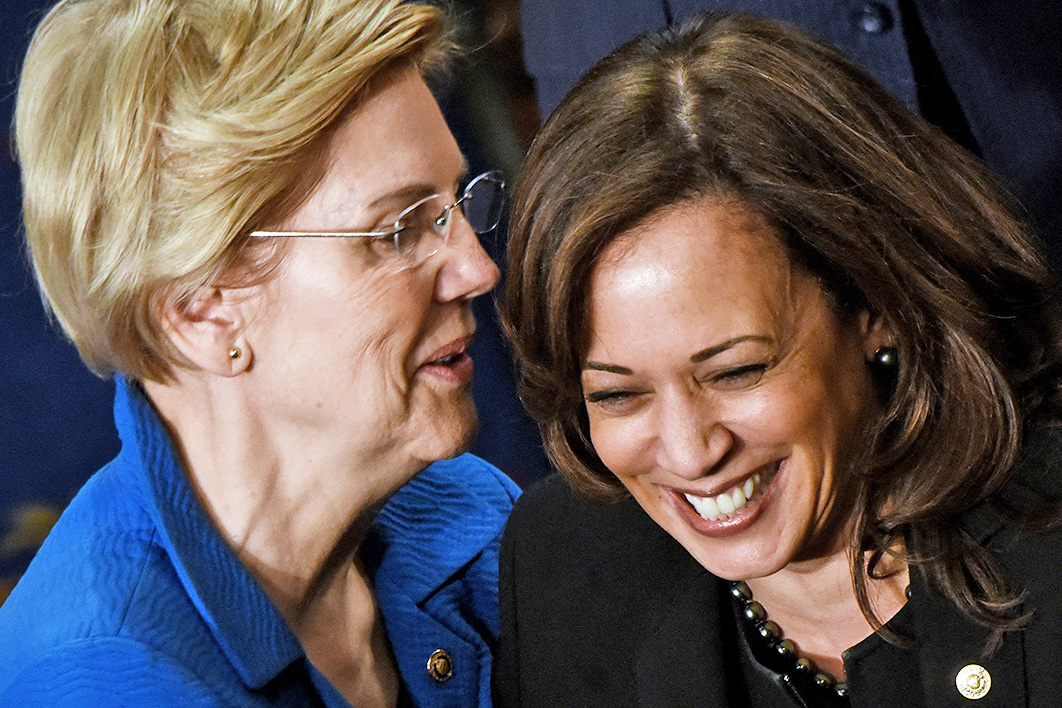 Democratic presidential candidate Joe Biden’s pick of Kamala Harris as his running mate is an historic decision for a pivotal election that will be held in extraordinary circumstances. Making his announcement, he acknowledged the tough fight ahead: “I’ve decided that Kamala Harris is the best person to help me take this fight to Trump and Mike Pence and then to lead this nation starting in January 2021.” The two are set to appear together for the first time as a presidential ticket in Wilmington, Delaware, tomorrow.

Former president Barack Obama was quick to tweet his support. “Joe Biden nailed this decision,” he wrote. “By choosing Senator Kamala Harris as America’s next vice president, he’s underscored his own judgements and character.”

Biden declared back in March that he would choose a woman as his running mate, and the rise of the Black Lives Matter movement and growing support for racial justice strengthened the push for a person of colour. He had a rich selection to choose from: former ambassador Susan Rice, representative Val Demings, mayor Keisha Lance Bottoms, senator Tammy Duckworth, representative Karen Bass, and Georgia Democrat Stacey Abrams, as well as Harris herself. Although Harris was an obvious match, she faced strong competition from well-qualified women, many of whom would surely find roles in a future Biden administration.

Harris, whose parents are from Jamaica and India and who identifies as Black, will become the first woman of colour on a major-party presidential ticket, and only the fourth woman. But she is running more in the footsteps of Shirley Chisholm (who made a landmark presidential bid in 1972) than of Geraldine Ferraro (the first woman nominated for the vice-presidential position in 1984).

Biden’s choice has been described as one that “will literally make history and change the trajectory of history.” It makes a series of proudly unequivocal statements: that women of colour have a critical role to play in national politics; that America’s diversity should be represented in the White House; and that Biden is not afraid to be associated with an ambitious, powerful woman.

Biden’s eight years as vice-president and his decades of political service mean he is acutely aware of what is needed in a running mate: trust and compatibility are key, along with strengths that complement and extend his own, and experience in reaching out and working with others, especially in the congressional legislative arm of government. The ability to galvanise the electorate and get out the vote is more important than delivering a single state.

On the personal level, the candidate must pass a vetting process that ensures no nasty surprises will be uncovered by the opposition and the media. And — especially for a woman — stoicism and strength is needed to withstand excruciating scrutiny, scorn and even lies.

Harris ticks all these boxes. In particular, she has had a longstanding relationship with Biden and his family, built when she and Biden’s son Beau (who died of a brain tumour in 2015) were attorneys-general in California and Delaware respectively. As vice-president, Biden swore Harris in as senator in 2017. And it is not unimportant that Harris also has an excellent relationship with Obama, dating back to her early support for his 2008 presidential run.

But it isn’t just that Harris meets Biden’s need for a relationship that is “simpatico”; they are also aligned in their generally centrist approaches to policy. Her run in the presidential primaries means her personal and political past have already been exposed and she is well aware of the tough times ahead, as foreshadowed by comments on her pantsuits and pearls and those who ask “is she Black enough?”

Two further issues count here. Harris has a far more vigorous campaign style than Biden and is effective in debates. Her experience as a prosecutor is excellent preparation for the attack-dog role she will need to play to enable Biden to remain, presidentially, above the fray. Trump and Pence will run a scurrilous campaign loaded with falsehoods and dissembling. Harris, like no previous vice-presidential candidate, will need to bait, fact check and condemn them and their surrogates.

Arguably her most important attribute is that she has the experience to step into the presidential role. In the days ahead it will be crucial to the Democratic campaign for Americans to see this clearly. Given that Biden would be the oldest person to take the office, much has been made of the need for a vice-president who can step up.

Biden has referred to himself as a “transition candidate,” acting as a bridge to a younger generation of leadership. This is often taken to indicate that he will only serve one term. Harris would have a strong prospect of becoming president in her own right should Biden not run for re-election in 2024, so the longer-term future of the Democrats is at stake.

Harris has downsides, of course. Although generally well recognised and well liked among many demographics aligned with the Democrats, she did not do as well as expected in her presidential primary race. Her time as a prosecutor and California’s attorney-general is a cause for concern among progressives. The fact that she and Biden share similar centrist positions means that they will have to work hard to drive enthusiasm for the ticket from the left and younger voters. That said, there have already been positive messages of support from Bernie Sanders and Elizabeth Warren. It’s to be hoped that Harris’s partnership with Alexandria Ocasio-Cortez on a climate equity bill is also a sign of party unity.

So far, President Trump’s reaction has been somewhat low-key, though that is unlikely to last. After news of Harris’s selection broke, he told reporters that she was “my number one draft pick” as a potential Biden running mate. He cast his criticisms of her in typical Republican tones (she’s for raising taxes and slashing military spending, against fracking and petroleum products, and in favour of socialised medicine) and then resorted to typical personal tones. He called her “nasty” and “horrible” and said that she was “very disrespectful” to Biden when she attacked him in the Democratic primary debates for his support for busing.

The Trump campaign is currently struggling to find its way, not helped by a president who is reportedly angry and unwilling to take advice. The malaise is reflected in the polls, with a survey out just hours ahead of Biden’s announcement giving him a ten-point lead over Trump nationally. There are even rumours that Trump could dump Pence as his vice-president if the Democratic ticket generates lots of voter support.

The adage is that vice-presidents don’t win elections but they may help lose them. Its truth will be tested in a campaign held against the backdrop of the coronavirus pandemic, economic hardship, social unrest, striking partisan divides and threats from inside and outside the nation to undermine the voting process. •

The morality of presidents

Books | We can never know the consequences of foreign policy, says the man who coined “soft power.” All we know are the means

The best and the worst: US presidents Donald Trump, Barack Obama, Bill Clinton and George W. Bush at the funeral of president George H.W. Bush in December 2018. Ron Sachs/CNP/AdMedia Photo via Newscom 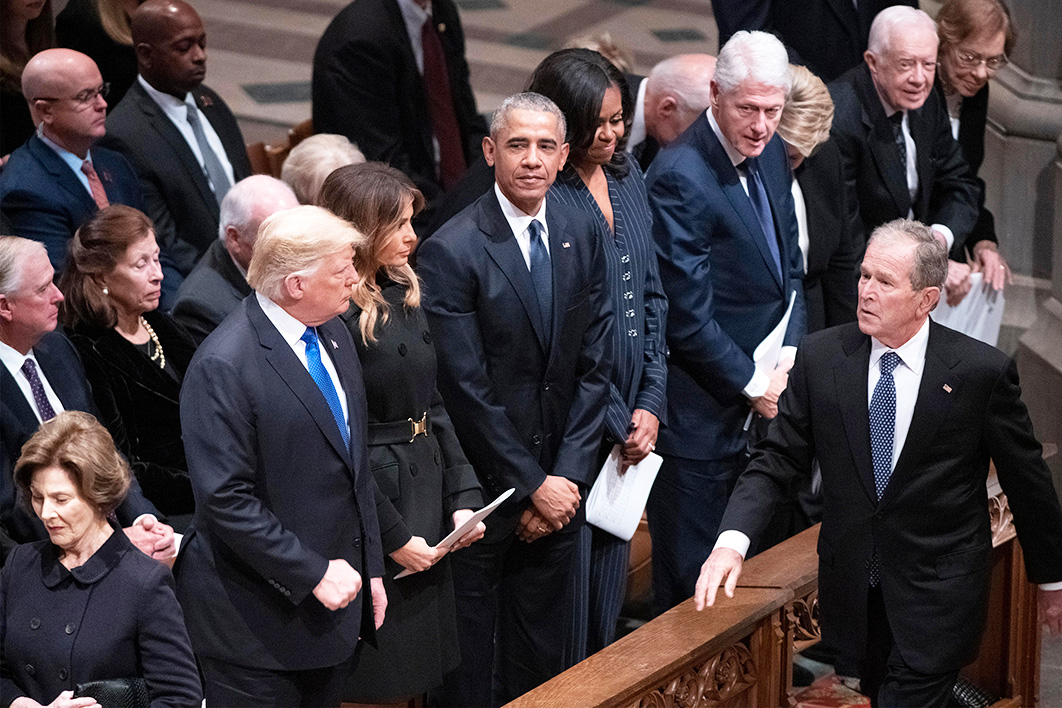 The best and the worst: US presidents Donald Trump, Barack Obama, Bill Clinton and George W. Bush at the funeral of president George H.W. Bush in December 2018. Ron Sachs/CNP/AdMedia Photo via Newscom