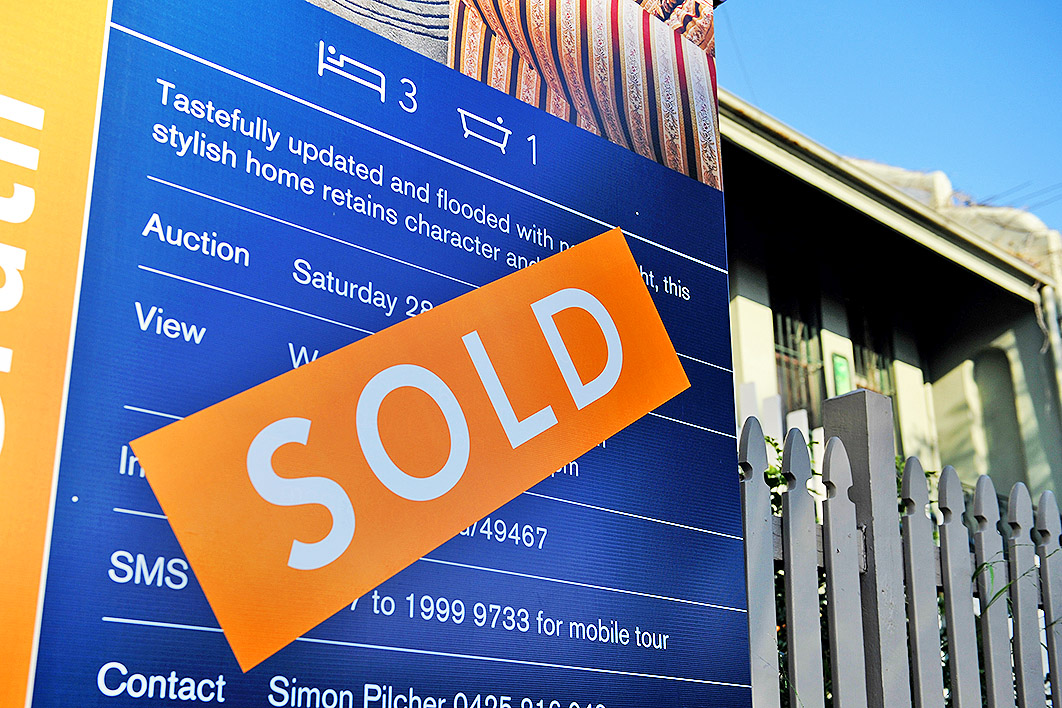 On the evening before Victoria was plunged into five-day lockdown, I was bidding at an inner-Melbourne auction for a friend. I ended up standing on the nature strip with my hands in my pockets, but not because of the pandemic.

On offer in Princes Hill was a second-floor, two-bedroom apartment. Described in the listing as “impeccably maintained retro,” it was the best-situated flat in an ugly block of chocolate-brown brick walk-ups dating from late 1960s. Its interior was charming, and the publicity wasn’t wrong about the abundance of natural light and gorgeous neighbourhood views. When it came to the price, however, it was way off the mark.

The agent’s indicative guide had the apartment selling for between $630,000 and $680,000. My friend, who didn’t come down in the last shower, had come prepared to pay about $100,000 more. But I didn’t even get to raise my finger on her behalf, because a clutch of other determined buyers quickly pushed the price up to $845,000.

The previous Sunday, I’d been a few streets away in Carlton North, visiting another friend who has just rented an apartment in a similar-sized block of a similar vintage. She’d decided to move when her previous lease in a dingy Victorian terrace came to an end. The new apartment was smaller than her old place, but it was also cleaner, lighter, better maintained and much, much cheaper.

My friend is $175 a week better off after the move. That’s consistent with the latest data, which shows rental returns on units in Melbourne down about 10 per cent on pre-pandemic levels, and falls in the inner city far steeper than the average.

A relative owns a two-bedroom apartment in central Melbourne that’s been returning $590 a week in rent for the past two years. Last month, after the tenants announced they were moving out, the agent suggested slashing the price by nearly a quarter, to $450. It’s a good apartment, but it could still prove hard to let. The rental vacancy rate in Melbourne’s CBD is more than 14 per cent — the highest in the country — which means almost one in seven rental units sits empty.

Meanwhile, just seventy-five minutes’ drive away in Torquay, on Victoria’s surf coast, you can’t find a place to rent for love or money. The vacancy rate there is officially zero.

Not long before Christmas, I offered to bid for friends — first homebuyers — who were keen on a house in Geelong, two-thirds of the way to Torquay. Again, I didn’t get to raise my hand as the auction quickly vaulted past the anticipated price. Between December 2019 and December 2020, the median house price in Geelong jumped from $550,000 to $601,000, a rise of almost 10 per cent. Over the past five years, median prices in the city have risen almost 50 per cent.

At one level, such weirdness is easily explained. Inner Melbourne is suffering from the loss of international students and other migrants who have been kept out of Australia by Covid-19 border restrictions. Meanwhile places like Geelong and Torquay are straining under an influx of sea- and tree-changers imagining a lifestyle that combines working from home with fresh air and outdoor space.

This is a reminder that there is not, and never has been, a single housing market, and averages can conceal more than they reveal. Demand for a house-and-land package in Tarneit on Melbourne’s western fringe, for example, is not a good indicator of the value of high-rise apartments in Southbank or, for that matter, a light-filled retro flat in Princes Hill.

On another level, though, the real estate market is just crazy and has been for a long time.

Basic economic theory links prices to supply and demand. If real estate values are rocketing upwards, like in Princes Hill, that means there aren’t enough inner-city apartments to go around. But if rents for inner-city flats are falling sharply, that suggests the opposite problem — the market is flooded with too much stock.

In theory, demand for housing — and therefore prices — should be linked to factors like immigration, employment prospects and household incomes. Immigration has stopped. Unemployment, and underemployment, though lower than feared, are still well above pre-pandemic levels. And average household incomes have been stagnant for more than a decade — and that isn’t about to change, as Reserve Bank Governor Philip Lowe warned this month. Yet (average) house prices defy these trends, as if disconnected from the everyday economy and ordinary lives.

If the housing market functioned with the efficiency claimed by free-market economic theory, then inner-city Melbourne would not be littered with vacant apartments — indeed, many of the soaring residential towers still being built in the CBD would never have been started. If the market were efficient, then it would allocate housing at an affordable price. Instead, more than half of all low-income tenants live in rental stress, shelling out more than 30 per cent of their disposable household income to keep a roof over their heads.

The weirdness of real estate prices and rents should caution us against relying primarily on “the market” to allocate a crucial good like housing.

Housing can’t be compared with bananas, which jump in price when a cyclone wipes out the Queensland crop and then come down again as plantations recover. If bananas get too expensive, we can switch to apples or pears for a few weeks. Nor is there much point in ordinary consumers speculating on the banana market by buying more than they can eat in the hope of selling at a profit in a fortnight. Bananas that don’t get eaten never rise in value, whereas houses that don’t get lived in just might.

The housing market’s distinctiveness doesn’t end there. The prospect that interest rates will remain near zero for the foreseeable future emboldens buyers to borrow more, pushing up real estate values. This inflationary process is further encouraged by stimulatory measures like stamp-duty discounts, first homebuyer grants, home builder programs and other government handouts that are quickly embedded in higher prices.

Also driving up prices is the generous tax treatment of housing. The asset price inflation that has been a hallmark of Australia’s residential market in most capital cities since the start of the century produces tax-free windfall gains for owner-occupiers (with zero impact on owners’ eligibility for the age pension). Meanwhile the capital gains tax discount makes property highly attractive to investors.

The more prices rise, the greater the incentive for further speculation, and the more vociferous the media spruiking that accompanies it.

Peter Phibbs, professor of urban planning at the University of Sydney, has memorably described Australia’s housing market as the “Game of Homes.” The longer the game goes on, the higher the stakes.

One feature of the game is Australia’s record level of household debt. Eventually, though, property prices must fall back to earth, and the higher the debt, the more damaging the shockwaves will be throughout the economy.

Australia’s Game of Homes is also deepening and entrenching inequality. In the postwar decades, anyone earning a reasonable wage had a reasonable prospect of eventually becoming a homeowner. That expectation has long since evaporated. The cost of servicing a massive mortgage on an average income is not the real barrier — the bigger problem is the size of the deposit required to enter the market. According to ANZ, a typical Melbourne household would need to save 15 per cent of their gross annual income for a decade to come up with the 20 per cent deposit needed to buy a median-priced home. Without an advance from the parental bank, most first homebuyers will struggle to reach that goal.

Home ownership is being transformed into a dynastic privilege, and that matters not because owning is intrinsically preferable to renting but because the primary financial asset for most Australian households is their dwelling. So the difference between owning and renting generally holds the key to whether you acquire any lifetime wealth.

What’s more, Australia’s low age pension rates are predicated on an assumption of home ownership in retirement. As Treasury’s recent Retirement Income Review documented, older renters experience higher levels of financial stress and poverty than homeowning retirees because they have much higher housing costs. Home ownership is sometimes called the “fourth pillar” of Australia’s welfare system, but the pillar is crumbling.

Existing property owners like me, watching our tax-sheltered housing assets rise, are generally winners in the Game of Homes. But the game also generates a constant stream of losers — primarily people on low incomes.

As a new report from the UNSW City Futures Centre and ACOSS shows, state governments did a creditable job of providing around 40,000 rough sleepers with immediate shelter after the pandemic hit. Eviction moratoriums reduced the risk of more people being rendered homeless, as did the banks’ mortgage repayment pause and the JobKeeper program. The lift in JobSeeker (via the temporary coronavirus supplement) made many low-income renters better off than they had been in years.

But as the report documents, only a minority of the people put up in hotel rooms and other emergency accommodation have been moved into longer-term housing, and in some cities rough sleeping is rising again. And the eviction moratoriums, the mortgage repayment pauses, the JobKeeper program and the extra payments to jobseekers will all soon end.

There is a simplistic, frequently repeated and often self-interested claim that Australia could build its way out of its housing affordability crisis if only we liberalised planning laws and let market forces work their magic. This is bunkum, not because planning laws don’t matter, but because “the market” is far more complicated than the claim suggests and is profoundly shaped by many other factors, especially tax settings.

I am yet to find an example anywhere in the world of private developers delivering safe, affordable housing for people at the bottom end of the income scale. Doing this always requires significant government investment. The Morrison government wants to push that responsibility onto the states and territories, but as the lead authors of the UNSW–ACOSS report argue, Canberra must “share responsibility for housing outcomes” because the Commonwealth controls vital policy levers like tax, social welfare and immigration. It is also the only level of government that has the resources to fund and coordinate a coherent national housing strategy.

The impact of the pandemic on housing has yet to run its course, and Melbourne’s bizarre combination of rising property prices and plummeting rents should caution us against relying heavily on “the market” to allocate such a crucial good. •

Peter Mares is lead moderator at the Cranlana Centre for Ethical Leadership at Monash University and contributing editor of Inside Story. His most recent book is No Place Like Home: Repairing Australia’s Housing Crisis.