By 2030, according to the government’s own figures, Australia will have spent three decades making almost no progress in reducing emissions 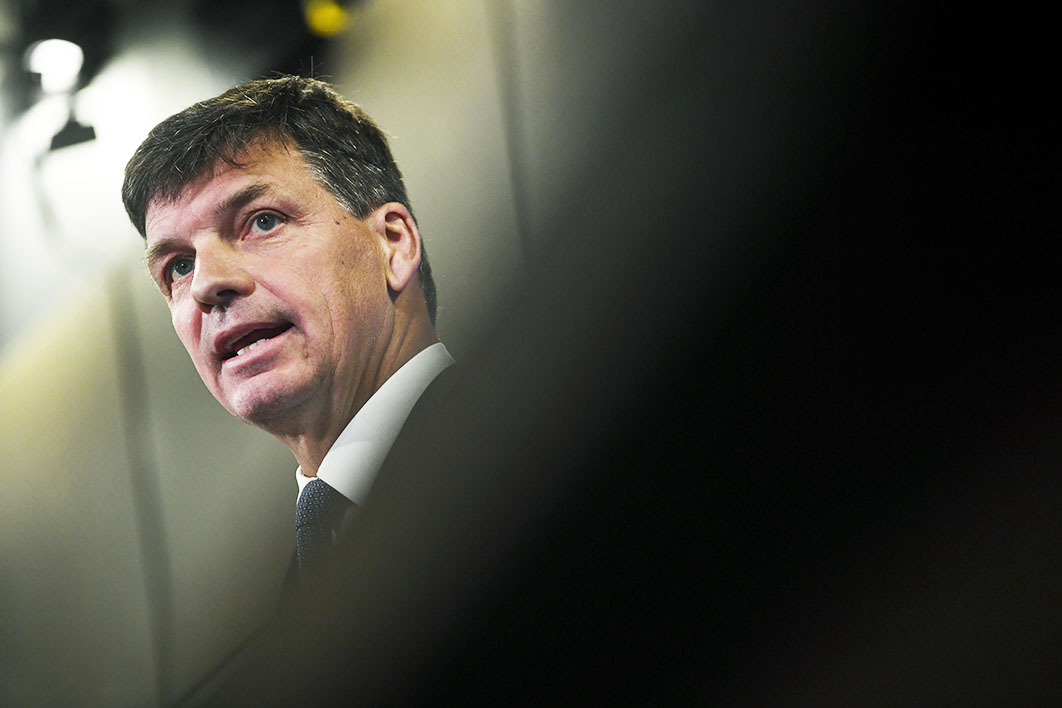 To best understand Technology Investment Roadmap: Global Leadership in Low Emissions Technologies, the government’s latest contribution to climate change and energy policy, you need to look up the back catalogue of Working Dog, the producers of ABC TV’s Utopia. There sits an episode of The Hollowmen, a political satire involving a team of advisers to the prime minister.

In the episode called “A Waste of Energy,” the PM’s advisers are struggling with the fact that the government’s plan to supply China with more coal will expose their boss’s grand rhetoric about fighting climate change. A brainstorming session ensues:

Adviser 1: What if we were to say we were selling them clean coal?

Adviser 2: Unfortunately, there’s a problem with that.

Adviser 2: [exasperated] There’s no such thing.

Adviser 1: Aren’t we working on it?

Senior Adviser: Yeah… but not with a straight face. It’s a long way off in the future. [Wistfully looking to the sky with a smile] But boy it’s been a fantastic distracting phrase.

Adviser 1: What if we come up with another one?

Let’s put aside the fact that this latest technology roadmap policy is eerily similar, though less thorough, than a government document released in 2017 — which, incidentally, was also called the Low Emissions Technology Roadmap. (Yes, they aren’t much good at coming up with new distracting phrases.)

The fault with this latest roadmap doesn’t lie so much in the technologies it recommends for funding (including, you guessed it, clean coal, aka carbon capture and storage). Its fatal flaw is that even if it managed to achieve all its “stretch targets” for these technologies by the ten-year mark, we’d still be no closer to achieving emissions-reduction goals unless the government also accepted the need for a carbon price.

Of the five nominated technology priorities, three would remain completely uncommercial without a significant carbon price or some other incentive for carbon abatement.

Hydrogen: The government’s target is a production cost of $2 per kilogram. This equates to a price per gigajoule of energy of almost $17 (measured by lower heating value). Yet manufacturers say they’ll be ruined by gas prices in the realm of $8 to $12 per gigajoule and energy minister Angus Taylor talks of bringing that figure down to $6 per gigajoule as part of his gas-fired recovery.

Carbon capture and storage: Here the target is $20 per tonne of CO2 captured and stored underground. But this involves extra equipment and a reduction in the conversion efficiency of existing fossil fuel burning processes, which means it will cost an extra $20 per tonne of CO2 relative to what we’ve done in the past.

The remaining two of the roadmap’s five technological priorities — long-term storage and enriched soil carbon — are also hamstrung by the lack of a carbon price or some other financial incentive for reduced emissions. Long-term energy storage is completely unnecessary unless we significantly expand renewables, but investment commitments in wind and solar farms have collapsed over the past twelve months except where state government initiatives apply.

Enriching soil carbon certainly provides agricultural productivity benefits to farmers. But the roadmap effectively concedes that this too relies on a carbon price. Its aim isn’t to foster technologies to help farmers increase soil carbon; it is to measure soil carbon more cheaply so farmers can then make money selling carbon credits.

The government wants us all to think about the technologies we might need ten or twenty years down the track. But this is just a distraction from its failure to materially reduce emissions right now. And for those future technologies to be of any interest to the private sector they will need exactly the same type of policy mechanism that we need to reduce emissions immediately.

Yet the government’s one and only mechanism to do this — the Emissions Reduction Fund, since rebranded as the Climate Solutions Fund — is hamstrung by an inadequate budget and an inability to attract meaningful levels of abatement at a price the Clean Energy Regulator is able to pay. The two charts below help to explain why the government is so desperate to distract us from the here and now.

The grey line in the first chart shows that by 2030 emissions will be almost the same as they were in 2000. This is based on the government’s own projections and includes an array of optimistic assumptions about what existing policies will achieve.

Let that sink in for a second or two: this would represent three decades of almost no progress in getting our emissions down.

The blue dashed line extrapolates the trend of the small annual average emissions declines the government expects over the 2020s all the way to 2050, and the green line shows the emissions trajectory required to 2030 to meet the government’s target of a 26 per cent reduction in emissions relative to 2005 (conveniently the year when our emissions almost peaked).

I’ve then extended this green line beyond 2030 to illustrate the path we’d need to take to bring emissions down to net zero by 2050. This is consistent with the targets adopted by Britain, New Zealand, France, Germany, Korea, Canada, Chile, Norway… the list goes on. It will include the United States, too, if Joe Biden is elected president in November, and China has recently committed to net zero by 2060.

The yellow bars that build steadily from 2020 to hit 530 million tonnes of CO2 by 2030 represent the amount of new abatement the government needs to acquire to meet its 2030 target. This is a function of emissions not just in the year 2030, but in all the years from 2021 to 2030. The government will of course claim that because Australia’s historical emissions were below prior targets under the Kyoto Protocol this counts as credit towards its Paris 2030 target. There’s just one problem — the other major signatories to Paris don’t agree.

That brings us to the next chart, which looks at what the government’s Emissions Reduction/Climate Solutions Fund has actually achieved. The green bars show how much annual abatement the projects contracted in each year’s auctions will deliver. The blue bar towering above most of these green bars is the annual amount of abatement the fund needs to be contracting each year in its auctions if the government is to achieve the 2030 target. 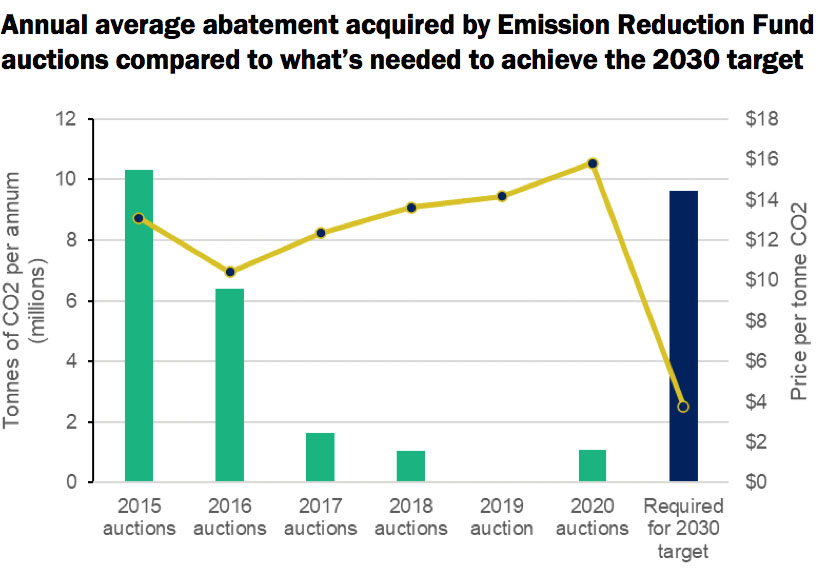 Source: Green Energy Markets LGC/Carbon Credits Price Drivers Report based on data within the Clean Energy Regulator’s Carbon Abatement Contract Register and the Federal Government’s Emissions Projections – 2019.
Note: Lapsed or terminated contracts are excluded. Annual abatement is calculated by dividing the total contracted abatement by total contract length including time to fulfil conditions precedent. The amount of annual abatement the government needs to contract in each year’s auctions is not 530 million tonnes divided by ten years. Rather, it is a function of the fact that projects contracted to deliver abatement in 2021 will provide that annual abatement over ten years; meanwhile, the next year the projects contracted will only be able to contribute nine years’ worth of abatement towards the 2020–30 Paris target, the subsequent year’s contracted projects provide eight years’ abatement, and so on. So the total number of years for which the auctions can contract projects to deliver abatement to 2030 is fifty-five.

The two auctions in 2015 contracted a combined total of 10.3 million tonnes of abatement per annum, in line with what the government needs to be procuring in future years. Unfortunately the amount of abatement the fund has procured has since collapsed.

Why? When the fund began conducting auctions in 2015 it had the benefit of being able to piggyback on myriad abatement projects that had been developed either under the Gillard government’s carbon pricing regime or, in many cases, with the support of the old Renewable Energy Target or the NSW Greenhouse Gas Abatement Scheme (the world’s first emissions trading scheme). And a big bunch of low-hanging fruit — NSW land-clearing permits — were another cheap, never-to-be-repeated pick-up.

The other side of the equation is the price the Clean Energy Regulator has been prepared to offer for abatement, which is shown by the yellow line with blue dots. While the volume contracted in 2017 collapsed, it still had to pay a higher price to get this much-diminished volume compared with what it paid in 2016. Since then the regulator has slowly increased the price it will pay, but the abatement volume offered remains tiny.

In order to stimulate abatement volumes to remotely near what’s required, the regulator will almost certainly have to pay a substantially higher price than the roughly $16 per tonne offered recently. But to make its budget of $2 billion stretch to purchasing 530 million tonnes, it can only afford to pay $3.77 per tonne.

The government likes to assert that its climate policy is about technology, not taxes. But it’s not technologies that we’re lacking, it’s the money to drive businesses to use and improve them. And that has to come from either a carbon price of some kind, or raising other taxes. •