Seeking an alternative to life in limbo

Facing an uncertain future in Indonesia, it’s hardly surprising that some refugees and asylum seekers try to continue on to Australia, writes Savitri Taylor 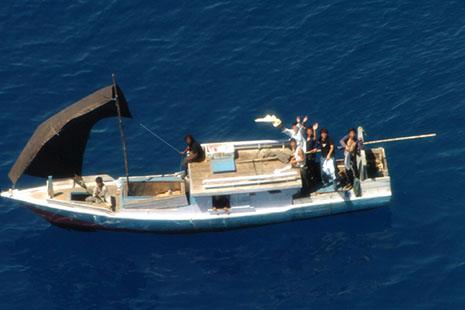 An unauthorised boat with ten asylum seekers intercepted off the West Australian coast on 19 November 2008. The skipper of the vessel, Indonesian man Man Pombili, was sentenced to six years in jail in the District Court in Perth on 17 April. Office of the Prime Minister

ON 30 SEPTEMBER last year the Australian Navy intercepted a boat off the coast of Western Australia and took the twelve Middle-Eastern asylum seekers on board to Christmas Island. These individuals, who had made their way from Indonesia, were the first unauthorised boat arrivals of the Rudd era. Since then several more boats carrying mostly Middle-Eastern asylum seekers have made the same trip. I use the term “asylum seeker” advisedly because all the arrivals to date appear to have made protection claims. What is more, all the protection claim decisions of which I am aware have been positive. In other words, the claimants have been recognised as refugees and granted permanent protection visas.

The federal opposition is arguing that the abolition of temporary protection visas and the softening of immigration detention policy have encouraged a renewal of people smuggling, which means that the government is to blame for the spate of unauthorised boat arrivals. There may be a small element of truth in this, but I tend to agree with the government’s assessment that the recent upsurge in irregular asylum seeker movement is part of a worldwide phenomenon largely caused by events in source countries such as Afghanistan, Iraq and Sri Lanka. Unfortunately, the one point on which government and the opposition are in rhetorical agreement is that Australia needs to keep intensifying its efforts to strengthen border control and disrupt people smuggling until the boats stop coming.

The historical evidence suggests that completely suppressing irregular movement is impossible, especially where it is driven by factors even more compelling than a convergence of interests between workers in one country and employers in another. No matter how highly motivated and no matter the lengths to which it is prepared to go, no state has yet succeeded in exercising complete control over its borders. Although I do not approve of the political cynicism underlying the ploy, I can understand why the opposition would wish to frame the public debate in such a way that the government’s political credibility stands or falls on its ability to achieve perfect border control (although today’s Newspoll suggests that most members of the public are sceptical about the possibility of a perfect solution). What I cannot understand is why the government is foolish enough to do the same thing when it must know that the inevitable and only winner will be the opposition.

I have spent the past few years making a close study of Australia’s many layers of offshore border controls, which include Australian immigration, customs, police and other officials posted in potential source and transit countries to assist with interception and millions of dollars poured into building the border control capacity of regional countries. Australia’s work with Indonesia is particularly intense and many more asylum seekers are intercepted there than ever manage to arrive here. Of course, it is always possible to do more. The salient point is that we could easily spend our way into bankruptcy without achieving the goal of complete border control. It seems to me that the government would better serve its own political survival by focusing its efforts on helping the Australian public to understand why the boats keep coming.

Some time ago Indonesia indicated that it intended becoming a party to the Refugees Convention and Protocol; whether it actually does so remains to be seen. In the meantime, a 2002 directive of the Indonesian Immigration Directorate General states that people seeking asylum or refugee status in Indonesia must be referred to the Office of the United Nations High Commissioner for Refugees, or UNHCR, for refugee status determination. In addition, the Howard government initiated, and the Rudd government has continued, an arrangement with the Indonesian government and the International Organization for Migration, or IOM, known as the Regional Cooperation Model. Under the model, Indonesian authorities intercept irregular migrants and refer those they believe were headed toward Australia or New Zealand to the IOM for material assistance. The IOM informs these people about their right to make asylum claims and refers those who indicate that they wish to make such claims to the UNHCR. The IOM continues to provide individuals with accommodation, food and medical assistance pending determination of their claims by the UNHCR. If an individual wishes to return home then the IOM provides repatriation assistance. If they are recognised as refugees the UNHCR takes responsibility for their care in Indonesia.

The IOM’s role in the Regional Cooperation Model is funded by Australia. Although the UNHCR is not a formal participant in the model, the Australian government has also been providing some of the funding for that organisation to determine refugee status and provide material assistance to refugees in Indonesia. All of this is to Australia’s credit.

But refugee protection in Indonesia remains far from satisfactory. The 2002 directive provides that “the status and presence of aliens holding Attestation Letters or identification cards issued by UNHCR as asylum seeker, refugee or persons of concern to UNHCR, must be respected,” and this appears to be the case in practice. But there is some evidence that irregular movers are occasionally deported without being given the opportunity to make contact with the UNHCR in the first place, even if they come from known refugee-generating countries.

The next set of problems faced by asylum seekers in Indonesia relates to the refugee status determination process itself. From a legal perspective, the most significant problem is that the UNHCR’s process falls short of the standards of procedural fairness necessary to ensure that all those who are refugees are correctly identified as such. From a human perspective, the most significant problem is delay. Many asylum seekers in Indonesia are left waiting for about six months for their status determination interview. One asylum seeker who left the IOM’s care and made his way to Australia explained his feelings after waiting a month and knowing of others who’d been waiting three months: “Of course, we were very afraid because the UN did not come to us and there was no procedures that started in order for us to be assured. So that's why I was very afraid and that's why we had to escape.”

Living standards appear to be adequate for individuals who are in the care of either the IOM or the UNHCR in Indonesia. But there are a number of asylum seekers registered with the UNHCR in Indonesia who do not fall within the scope of the Regional Cooperation Model because they didn’t have either foot on a boat headed toward Australia or New Zealand at time of interception. These asylum seekers do not receive material assistance from IOM and are for the most part left to look after themselves (unless and until they are recognised as refugees). Since asylum seekers (and for that matter recognised refugees) in Indonesia are not accorded the right to work, these individuals can find themselves in quite straitened circumstances. Given that they face the prospect of penury, the only rational choice for asylum seekers who arrive in Indonesia with a few thousand dollars to their name would appear to be expending that money attempting secondary movement to Australia.

Depending on the complexity of the case, a period of three months to a year can elapse between the refugee status determination interview and a decision. Measures to speed up the process (without compromising the quality of decision making) would of course be welcome, but they wouldn’t solve the real problem: an individual who is recognised as a refugee by the UNHCR in Indonesia is not much closer than before to achieving a long-term solution to his or her plight. The Indonesian government insists that local integration is not an option, leaving recognised refugees in a state of limbo until changed circumstances in their country of origin make voluntary repatriation a possibility, or until a resettlement place is found in a third country.

At best, this state of limbo will last for years; at worst, for a lifetime. It means that children are deprived of effective access to education and adults are deprived of the meaning given to life by gainful employment. Many live with the stress of separation from family members left behind, while those who brought families with them to Indonesia see their children grow to adulthood without any prospect of a safe and productive future. Depression is pervasive among adults and children and so too are psycho-physiological illnesses. It is not surprising, therefore, that even recognised refugees have made (or attempted to make) their way to Australia by boat. The common theme running through the explanations provided by all of these individuals for their actions is the strongly felt need to bring an end to their state of being neither here nor there, even at the risk of death. •

Savitri Taylor is a senior lecturer in the School of Law at La Trobe University. She and Sandra Gifford of La Trobe University are presently engaged in an ARC Linkage project entitled “The Impact on the Human Rights of Asylum-Seekers and Host Communities of Australia's Border Control Cooperation with Indonesia and PNG.”