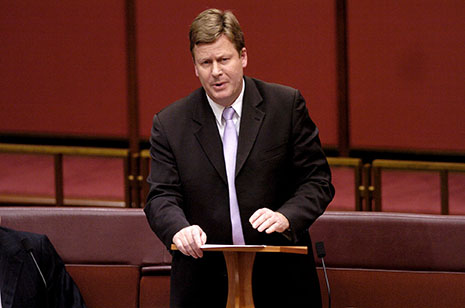 OPPOSITION spokespeople crave attention, and almost any publicity is good publicity. Following this rule, Senator Michael Ronaldson, the shadow special minister of state, pushed himself on Monday into a 487-word, page 2 article in the Australian under the headline “Electoral roll error rate earns Lib’s ire.” The article’s contents were bizarre.

The senator complained about the state of the electoral roll at the time of the last federal election. You know, on 24 November 2007, after the Coalition had been in power for eleven and a half years. And under rule changes the Howard government had put in place in 2006, which ensured that the roll would be less complete than it would otherwise have been.

Those 2006 changes have been debated at tedious length: they made getting onto the roll, or changing your enrolment details, a little easier for anyone with a driver’s license (perhaps 80 per cent of eligible voters) and quite onerous for anyone without one (the other 20). For all electors, the form itself became larger and more forbidding; these things make a difference when you want people to fill them in. And the rolls were needlessly closed to new enrolments when the election writs were issued, and closed three working days later for enrolment changes. (Other countries are moving the other way and keeping rolls open until election day.)

The Coalition government justified these new laws – which still apply today – on the grounds that they would make the roll less susceptible to fraud. These comprehensiveness-versus-integrity arguments are as legitimate as they are old, and any enrolment procedure involves a trade off between the two. But for a former Howard government member to complain that the roll was less than complete in 2007, or remains so in 2009, is very rich indeed.

But wait, there’s more. Noting that the “average error rate in the electoral roll is about 3.5 per cent, with the highest error rate 5.5 per cent,” the senator implied that with so many seats decided by vote margins below 3.5 percent, the roll’s inaccuracy may have cost his side government. This is just wacky. If any side was disadvantaged it was Labor, as the kind of people who dropped off or failed to enrol – renters, young folks, people who move around a lot, those without a drivers licence – tend to vote left of centre.

Senator Ronaldson took his information from this question upon notice to the minister, Senator John Faulkner, and the minister’s answer. It dealt with enrolment activity from July 2008 to March 2009, and presumably the shadow minister made his calculations from the data in answers 4(a) and (b) at the bottom.

But it is unclear why he used this data, rather than that included in the Australian Electoral Commission’s 2007–08 annual report, which would more directly pertain to the 2007 election. (See Table 7 on this page, and note that almost a third of enrolment transactions were “intra-division,” meaning they resulted in no change in eligibility to vote, and that about one in ten were new enrolments; none could constitute fraud at the last election.)

Millions of Australians move house every year and many don’t bother telling the AEC. The electoral roll is constantly changing, and the numbers quoted by Senator Ronaldson are not particularly large. It is true that Australia, once a world leader in enrolment, has fallen behind, but this is because we persist with antiquated systems. Neither side of politics has shown much interest in moving the AEC into the twenty-first century.

In any event, such data is so arbitrary that extrapolating to possible outcomes in seats is fraught with danger. Many of the people whose enrolment details were subsequently altered would not have been able to vote in 2007 anyway, precisely because they were wrongly enrolled. There was a huge leap in people who tried to vote but could not, largely because of the 2006 changes.

Several weeks ago I participated in a Joint Standing Committee on Electoral Matters roundtable on the first green paper on electoral reform, issued late last year by Senator John Faulkner, which deals with political finance and disclosure. Discussions were in good faith and politicians of all parties appeared serious and conscientious about finding a way to end the funding “arms race.” The Liberal Party has legitimate concerns in this area; in particular, if spending caps (one of the options) are put in place, Labor with its union relationships would probably be much better placed to get around them than the Liberals.

There are plenty of serious electoral reform issues that can be discussed. Inventing grievances may get shadow ministers the odd headline, but it dilutes the real concerns held by the Liberal Party. It’s called crying wolf. •

Peter Brent, a researcher at the Australian National University, is editor of Mumble.