Seven weeks is a long time in NZ politics

New Zealanders vote this weekend in the country’s most remarkable election in decades. How has the campaign unfolded, and what’s likely to happen afterwards? 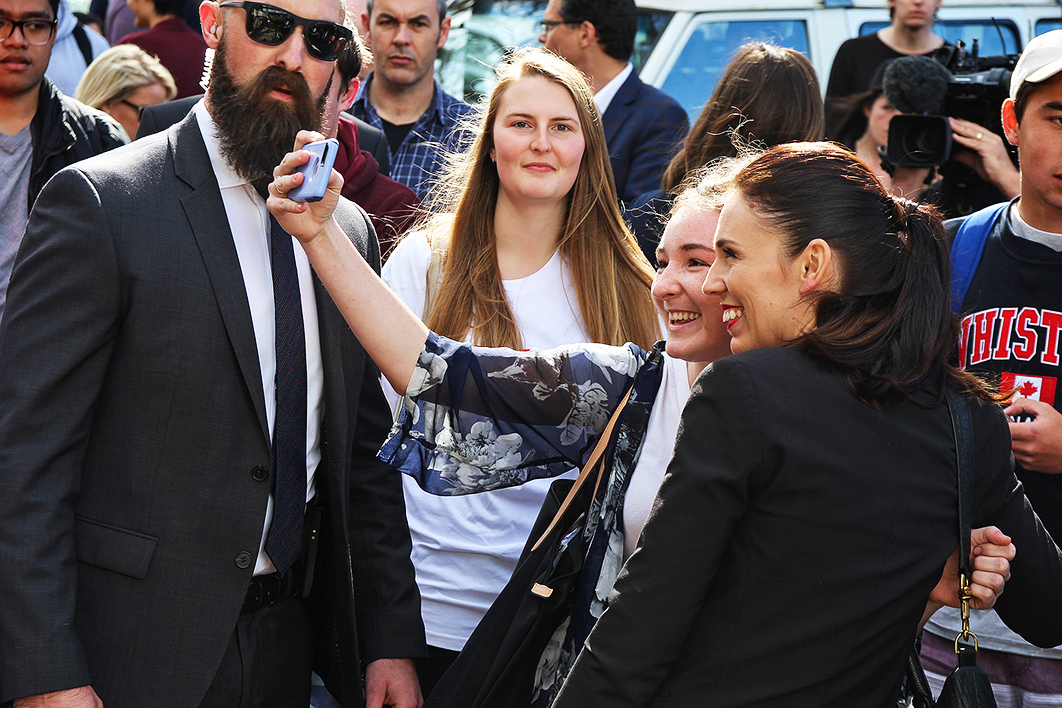 Seven weeks ago the New Zealand election looked to be a cruise for the incumbent National-led government. Then Jacinda Ardern took over as leader of the main opposition Labour Party and turned it into a tight race. Ardern’s strong personal appeal is similar to that of Justin Trudeau in Canada and Emmanuel Macron in France, and taps a milder version of the unease that buoyed Bernie Sanders in the United States and Jeremy Corbyn in Britain.

Until then, National’s advantage rested on strong consumer confidence in a growing economy, steady government and Labour’s lacklustre performance. Since 2008, the party has led governments with three small support parties: an indigenous-rights Maori party, the centrist United Future and the market-libertarian ACT. During 2014–17, National had fifty-nine of the 121 seats in the single-chamber parliament, with the Māori party holding two and United Future and ACT one each.

That government was built on National winning 47 per cent of the party vote (see panel below) in 2014, as it had in 2011 — remarkable figures in a highly proportional system such as New Zealand’s. They attested to the high popularity of John (now Sir John) Key, prime minister from 2008 to December 2016, when he suddenly retired.

Key’s deputy and successor, Bill English, had been a reliable, competent finance minister who got the budget back into surplus after hits from the global financial crisis and the disastrous 2010–11 earthquakes in Christchurch. He backed business and reoriented social assistance to what he called “social investment.”

English was banking on GDP growth of around 2.5 to 3 per cent and a budget in May well-stocked with election teasers. But a major ingredient of that economic growth was record net immigration equal to around 1.5 per cent of the population. Per capita GDP growth in the December and March quarters was flat. (The June figure is due on Thursday.)

And a doubling of house prices from 2007 (on top of roughly doubling between 2000 and 2007) locked young people out of the market, particularly in Auckland. The numbers of homeless increased sharply, as did media reports of poverty and serious strains on the hospital system.

This suggested all was not as smooth as National’s July average of 47 per cent support seemed to indicate. A pointer was a resounding win by Labour in a by-election in Roskill last December to replace former Labour leader Phil Goff, who had been elected Auckland mayor in October. National had thought it could win the seat.

When Ardern comfortably won a by-election in the neighbouring Mt Albert on 25 February this year, she was made deputy leader. That gave Labour a small poll bounce. But the party then slid to a poll average of 24 per cent in July. Little was persuaded to resign and Ardern was made leader on 1 August.

It was a desperate move. Labour insiders agreed it was risky. But Ardern’s assurance, confidence and humour wowed the media at her press conference an hour after being elected, and “Jacindamania” immediately took root. By the end of August, Labour’s poll average was 40 per cent, and it has remained at that level, though one recent poll had it as high as 44 per cent. Equally striking is the fact that Ardern has topped English as preferred prime minister, and as the most capable leader.

Wherever she goes she is mobbed, particularly by younger people. Her campaign launch on 20 August filled two halls, with the overflow forming a long line down Auckland’s Queen Street. Campaign volunteer numbers more than doubled almost overnight in August and online public donations, at more than NZ$1 million, are four times those of 2014.

Ardern connects with people in a way even Key did not quite manage. She is warm and without malice, the product of a Mormon upbringing, though she left the church when she was nineteen. She projects substance, intelligence and common sense.

She appeals especially to young people looking for something different from the baby boomers, someone relevant to the turbulent, digitised 2020s they must live through. She also appeals to over-forties and over-fifties looking for a change from the market-liberal or “third-way” policies of the past thirty years.

In that way she spans, on the one hand, the Trudeau effect — he took Canada’s Liberals from trough to government — and the Macron effect — promising an end to three decades of French decline — and on the other hand the Sanders and Corbyn promise of resurrecting a lost social democratic world.

She also encapsulates and personifies the long-delayed transition from the baby-boomer domination of politics since 1984. Three others on her frontbench are under forty and most senior spokespeople are forty-five or younger, including her close associate Grant Robertson, narrowly beaten for the leadership in 2014 and shadow finance minister since then.

However improbable it seemed seven weeks ago, including to her, Ardern might become prime minister next month. (Official results are declared on 7 October.) To do so, she will likely need New Zealand First, an economic and social nationalist party headed by Winston Peters, who served a year in a National cabinet in 1990–91, was in coalition with National from 1996 to 1998, and was in coalition with Clark’s Labour from 2005 to 2008.

Populist Peters wants curbs on immigration, free trade and foreign investment. He is not a Pauline Hanson, however: immigration has not stirred Trumpist or Brexit-like outrage and Peters’s party, now twenty-four years old, is morphing into a centrist party, with some capable MPs. There are immigrant Asians in his team.

Ardern is probably capable of managing Peters and his party. And she might have alongside her the Greens — “might” because a combination of Ardern’s rise and an internal faction fight has slashed the Greens’ polling average from 13 per cent in July to 6 per cent, and falling, in mid-September, with a risk that they may fall below 5 per cent and out of parliament.

The Greens and Labour signed a memorandum of understanding in May 2015 and an agreement on fiscal parameters in March this year. They are close on both environmental and social policy. But they are unlikely to be numerous enough on their own for a majority, even with the Māori party, which could swap sides.

So Peters might well decide which main party governs, though Ardern’s rise has also cut New Zealand First support from 13 per cent in July polls to a recent 6 to 7 per cent average.

What of the post-election landscape?

A National-led government would continue the market-liberal policies of the past three decades, though with increasing attention to social issues as their importance intensifies.

A Labour-led government would change some tax settings — though not till an expert working group has reported, and then not until decisions on its report were put to voters at the 2020 election. It would put more resources into social housing, health, education and social assistance. It would also take far firmer action on climate change and the environment generally.

Labour would also be receptive to work going on in the Treasury on “wellbeing economics,” which aims to measure economic success on changes in stocks of natural, social and human capital in addition to financial/physical capital. The present government has shown no interest in this scheme.

In foreign policy, a Labour-led government would reassert the “independent” foreign policy, requiring United Nations support for any offshore military commitments. It is unhappy with the current settings in TPP-11, in particular on land purchases by foreigners.

Labour would also be assertive on discrimination against New Zealanders by the Australian government. And it would remember that foreign minister Julie Bishop chose to attack Labour in the context of a New Zealand election over the Barnaby Joyce citizenship matter.

But first there has to be an election — the most extraordinary in decades. ●

New Zealand’s mixed-member proportional electoral system has two votes. One, the electorate vote, is for candidates in seventy-one geographical constituencies on a first-past-the-post, winner-takes-all basis. The other, the party vote, is for political parties, and determines the total vote each party gets. To match its total share of seats to its share of party votes, a party tops up any electorate seats it wins with candidates from a party list. A party that wins no electorate seats must win 5 per cent of the party vote to gain any seats.

Colin James is a political journalist of more than forty years’ experience. He writes a weekly column in the Otago Daily Times, and is a senior associate of the Institute for Governance and Policy Studies at Victoria University of Wellington.

Dance of the elephants

Despite Nick Xenophon’s efforts, less powerful players were squeezed out of the media reform deal 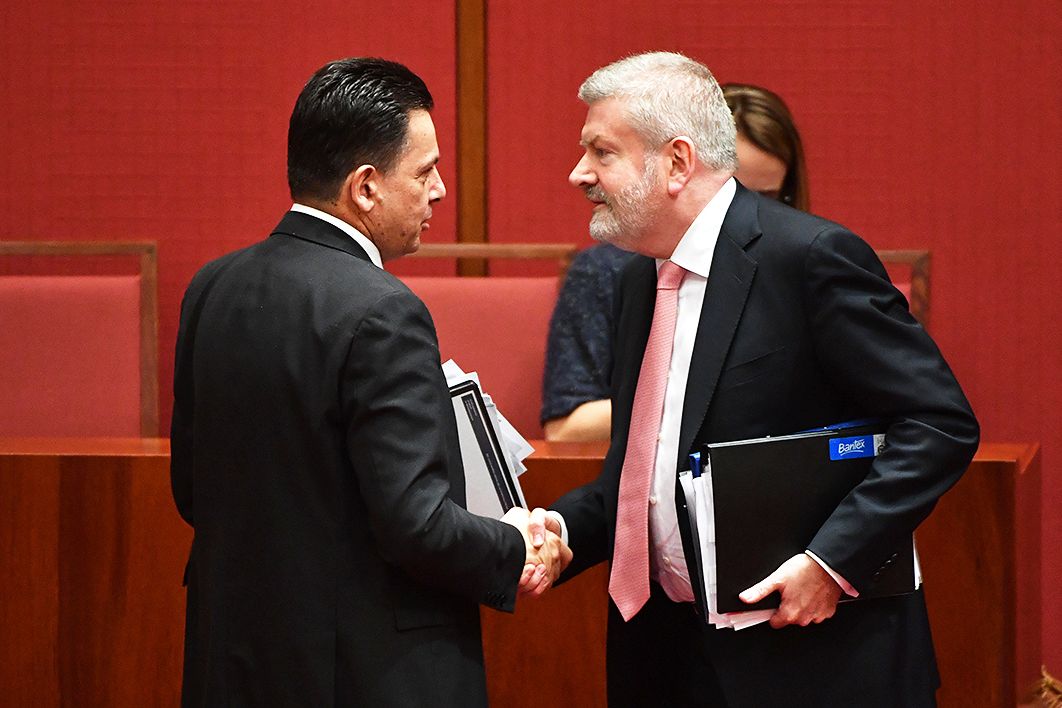