Singapore looks forward to the past fifty years

A tired government faces a splintered opposition at this month’s election, writes Michael D. Barr, and fresh ideas are at a premium 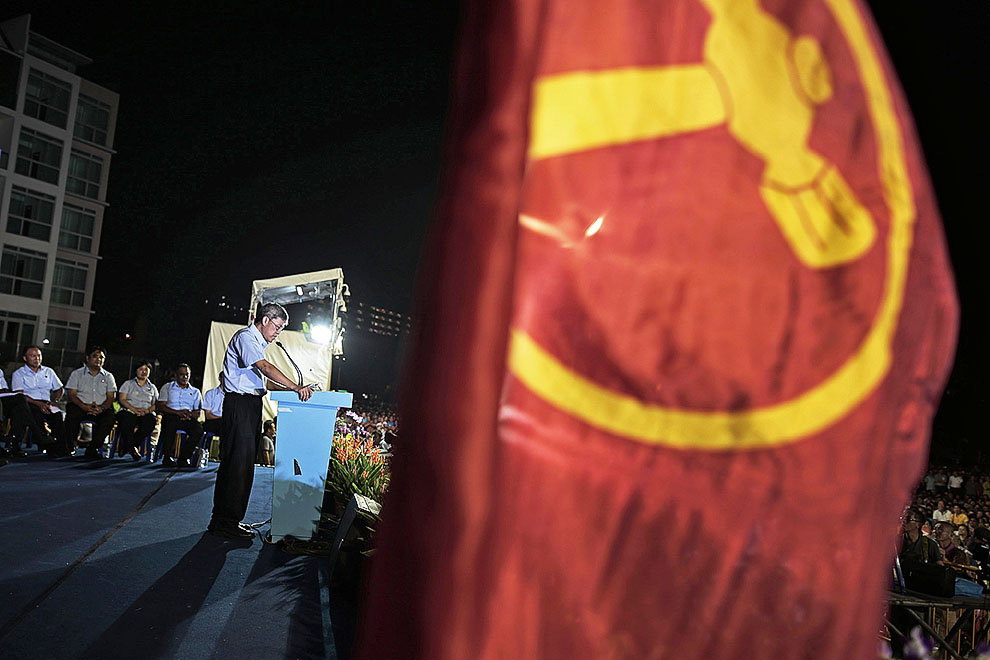 When Singapore votes on 11 September, it is theoretically possible that the government will change and a new prime minister will take office. But everyone knows that isn’t going to happen. The People’s Action Party, or PAP, has ruled Singapore since before independence in 1965; during that time, the greatest number of seats the opposition has held has been thirteen – and that was only because the pre-independence Legislative Assembly carried over to become the first parliament of the new republic.

It was another sixteen years before the PAP lost a seat in a parliamentary election. In 1981 a single opposition member won a by-election and entered parliament alongside seventy-seven government MPs, initiating a period of modest progress among the several active opposition parties. A decade later, four opposition MPs were sitting in a house of eighty-three elected MPs. This turned out to be a high point – until 2011, that is, when a landslide swing against the government took the opposition’s elected representation in parliament from two to six. Two years later, six became seven when the government lost another by-election.

No one thinks the opposition parties will transform their base of seven seats (all of which are held by the Workers’ Party) into a majority of forty-five, but that certainly doesn’t mean this month’s election is unimportant. It is important for the opposition, the government and the country, though for different reasons in each case.

For the multi-party opposition, the most serious risk is a move backwards. Five of its seven elected seats are held by one party, the Workers’ Party, in a single multi-seat constituency, the Aljunied Group Representation Constituency, and under Singapore’s winner-takes-all electoral system, a loss there could take them back to where they started. Their team in Aljunied is under tremendous pressure for its alleged mismanagement of the local town council. (Singaporean MPs double as municipal administrators.) Since 2011 the government has been hammering the example of Aljunied to create the impression that the opposition is a bunch of amateurs – or worse – who can’t be trusted with drains and walkways let alone running the country.

The campaign against the Workers’ Party team reached a new high after the elections were called and has the potential to do serious damage, but in the absence of published opinion polls it is difficult to know how much. Constituencies that elect opposition MPs tend to develop very strong loyalties to their contrarian representatives, and tend to resent rather than believe the government’s smears and attacks. The government’s critique of the Workers’ Party’s town council smacks of a hunting pack, and it would be surprising if it had more than a marginal effect on the outcome – but time will tell.

To balance the scales somewhat, the Workers’ Party is fielding the same experienced team that won the constituency in 2011, whereas four of the five PAP candidates are unknowns. (The PAP usually fields a couple of cabinet ministers in these multi-member constituencies but after losing two in 2011 it has obviously decided not to risk any more ministers in Aljunied.)

Leaving aside the risk of going backwards, this election offers the opposition a once-in-a-generation opportunity to consolidate its record-level holdings, or even to take its score of elected members into double digits. The eastern end of the island in particular has a number of single-seat and multi-seat constituencies in which the PAP might be vulnerable – and the opposition has no shortage of issues on which to fight for them. According to a semi-official 2014 survey of satisfaction with the government, the PAP’s most vulnerable issues are the cost of living, the cost of cars and housing, immigration, and the cost and reliability of public transport. Significantly for the opposition and for external critics of the Singapore government, the survey shows a high level of public satisfaction on the issue of “civil rights/liberties/free speech,” despite the government’s increasingly frequent and high-handed prosecution and persecution of people who dare to question it.

Also at stake for the opposition will be the shape of opposition politics itself. Eight opposition parties are contesting this election, and even though the Workers’ Party is the only one with elected MPs in the current parliament, two other parties (the Singapore Democratic Party and the Singapore People’s Party) have won seats in the past and the National Solidarity Party has come close. Even new parties contesting their first election are led by seasoned campaigners who used to belong to – or even lead – other parties. If the non-PAP parties hope to become an alternative government, they need to move beyond this very fluid landscape. And if the Workers’ Party remains the main opposition party after the election, the other parties should perhaps give some thought to recognising it as such and find a way to accommodate this as a fixed reality.

For its part, the PAP is looking down the proverbial barrel. The government has so much stacked in its favour that if it does well it will only be “as expected,” but if it does badly it will be a disaster. Not that the PAP will lose government, but any slippage from the already-bad 2011 result will probably destroy prime minister Lee Hsien Loong’s stature and authority inside cabinet. Even a failure to significantly improve the PAP’s showing will be enough for Lee to be judged harshly by his colleagues. The imperatives in Singapore’s political culture might make a spill motion against Lee extremely unlikely, but if the result is disappointing he risks becoming a lame-duck leader.

Lee followed the announcement of the election date with hyperbolic statements about the election ushering in the next generation of leaders and the next prime minister. This wasn’t just a contrived effort to appear statesmanlike: it was also an attempt to disguise his desperation in the face of the high stakes for which he is playing. There are other indicators of his desperation as well. Calling an election eighteen months early is a clear sign of nervousness, and his new pattern of asking to be judged more by his father’s record (since 1965) than by his own (since 2004) is an implicit admission that his eleven years as prime minister have been less than wonderful.

Yet it is too soon to be writing him off. Lee Hsien Loong emerged from the 2006 election with his authority seriously wounded by, among other things, the weakness of the party’s vote in his own constituency. This put his long-term hold on the prime ministership at risk, but he reversed the trend in his own constituency in 2011 (partly by tweaking the boundaries) and successfully turned his personal fortunes around, even as neighbouring Aljunied slipped away from the government.

This time, the PAP faces many challenges, but it still holds most of the cards. The institutional advantages it enjoys in any election have been supplemented by the fact that the election takes place immediately after the spectacular but jingoistic celebration of the fiftieth anniversary of Singapore’s independence, which in turn followed the dam-bursting wave of emotion after Lee Kuan Yew’s death in March. This confluence of forces is tailor-made for Lee’s chosen tactic of framing “his” government’s record over the fifty years since independence rather than the decade and a bit since he became prime minister.

For Singapore as a whole, the future looks more certain, if not more comforting. The most worrying feature of this election is how bereft the government is of new ideas – or at least that is how it seems at the time of writing.

Government ministers used the period before the formal campaign began to make preliminary statements. One of these was buried in an interview given on 27 August by manpower minister Lim Swee Say, who said, “The way we grew our economy over the last ten years or so, I think we all recognise that is no longer sustainable.” He was referring to the most explosive of all the policy failures that led to the surge in support for the opposition in 2011: the government’s effort to boost production levels through the simple expedient of drastically increasing immigration to boost the number of working bodies – a policy initiated personally by the prime minister ten years ago. This primitive strategy was itself a throwback to the economic model of the 1960s and 1970s, when Singapore was launching itself as a manufacturing and export centre. It worked in the 1970s, but there should have been no place for it in twenty-first-century Singapore.

When I read Lim Swee Say’s statement I assumed he had been given the task of foreshadowing a major revision in the direction of government, and I was puzzled to find it buried in a news report. After all, it is widely acknowledged that Singapore, as a country and as an economy faces new and unprecedented challenges that require novel responses. This has been the standard orthodoxy in the upper levels of the civil service for more than a decade, so surely, I thought, this must be the opening gambit in pushing in a new direction.

A few days later I watched Lee Hsien Loong launch his party’s election manifesto and then downloaded and read the manifesto itself. Only at that point did it become clear that Lim’s admission was not part of any plan. I was struck by the timid, backward-looking nature of both Lee’s speech and the PAP manifesto. No new ideas; no hint of reflection; no revision; nothing very much that looks forward at all. This is not just bad news for the PAP; it is bad news for Singapore, since new ideas are desperately needed. Lee still has time to announce new ideas, but time is running out and I am beginning to wonder whether there is a single new idea in cabinet – or whether there has been for some time.

This would never have happened under Lee Kuan Yew. His mind churned with probing questions, new ideas and unorthodox solutions. He had a courageous approach to leadership and he was never afraid to ask hard questions or challenge orthodoxies. The downside of his leadership was that there were basically no barriers between the formation of an idea in his head and the implementation of his idea on a national scale – and this led to many embarrassing mistakes and policy foibles. The upside was that at least he had ideas and could recognise good ideas that other people put to him. And he had the political and administrative skills to implement them.

The bottom line is that Lee Hsien Loong is no Lee Kuan Yew. As he draws attention to “his” government’s fifty-year record of achievement, he had better hope that people do not interrogate the comparison between himself and his father too closely. No doubt, such thoughts have already struck many of his colleagues in cabinet. •

Michael D. Barr is an Associate Professor in the School of International Studies at Flinders University.

Australia: much better than it looks!

The numbers game | The good news in this week’s growth figures is hidden by the downturn in mining, writes Tim Colebatch 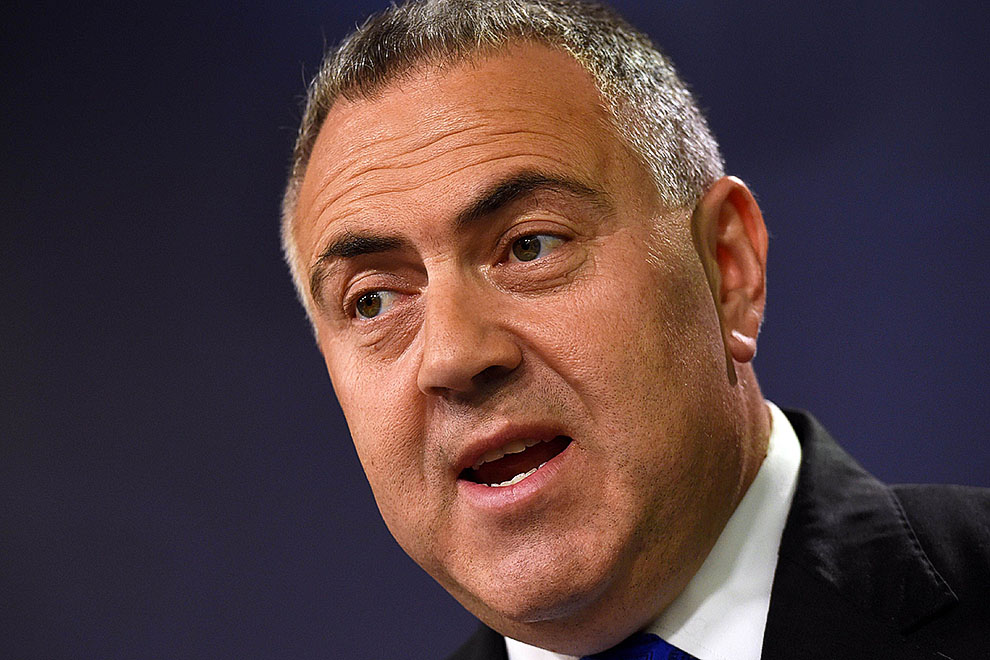