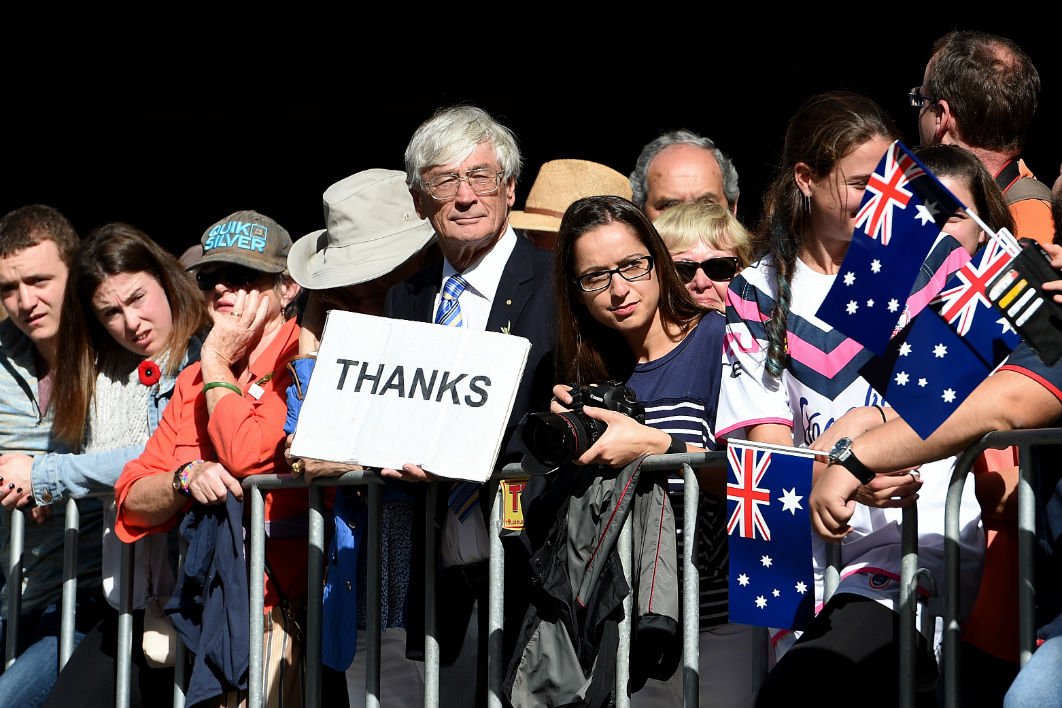 Dick Smith surrounded by members of the Australian population at the 100th anniversary Anzac Day Parade in 2016. Dan Himbrechts/AAP Image

Is Australia’s immigration policy based on a theory of perpetual economic growth fuelled by perpetual population growth? The Saturday Paper’s Mike Seccombe seems to think so. Writing last weekend under the headline “Inside the ‘Just Add People’ Dogma,” he approvingly compared Japan’s bare-minimum immigration with Australia’s longstanding policy of high immigration. Essentially, he said, Australia is running a Ponzi scheme and suggests a policy of zero net migration should be considered as a means of stabilising our population.

There’s no doubt the Australian government has failed to explain its approach to immigration, leaving itself open to attack by Tony Abbott, Dick Smith and other populists. Treasurer Scott Morrison has struggled to explain the economic benefits of Australia’s immigration policies, and home affairs minister Peter Dutton has been happy to have a bet each way, depending on his audience. Don’t expect either of them to offer a reasoned rebuttal of Seccombe’s case.

Leaving aside the inconvenient question of how zero net migration would be achieved (only by using the unpalatable options that immigration cutters tend to ignore), a policy of zero net migration for Australia would have two clear implications.

First, we would age at a much faster rate. It’s true that immigration can’t stop ageing in its tracks, as Seccombe suggests its advocates claim. But it does materially slow the rate of ageing over the long term. Under a policy of zero net migration, the graph of our population structure would more quickly become “coffin shaped,” as Australia’s foremost demographer, Peter McDonald, has warned.

As we’ll see, more rapid ageing has major budgetary and economic consequences. While all developed nations will age significantly over the next fifty years, immigration has kept and can continue to keep Australia’s population relatively younger than comparable nations.

Second, our population wouldn’t actually stabilise under a policy of zero net migration. Zero net migration and a fertility rate of 1.8 children per woman (a level we are already below) would mean that the annual number of deaths would increasingly exceed the number of births from around the 2040s onwards. As Peter McDonald points out, “We would have entered an unending fall in the absolute size of our population.”

Turning the immigration tap back on once this became clear would not be a simple proposition. Assuming zero net migration could actually be achieved, we would have gone through enormous pain in turning off the net flow of people.

In support of his case, Seccombe quotes Ian Lowe’s view of where we currently stand in relation to the population scenarios developed by the Australian Bureau of Statistics. Lowe, an emeritus professor of science, technology and society at Griffith University, believes that “the ‘A’ projection has us at sixty million at the end of the century, but we are currently tracking above the ‘A’ projection.” The problem is, that isn’t true.

Series A is the ABS’s high-migration, high-fertility and high-life-expectancy scenario. It assumes net migration will reach 280,000 by 2021 and remain at that level throughout the projection period, and it assumes our fertility rate will rise to 2.0 children per woman from around 1.9 in 2011–12.

Against the background of Peter Dutton’s moves to reduce net migration (most likely to a level significantly below 200,000 from 2018–19 onwards), the crucial demographic question is whether we should reduce immigration further in order to slow population growth more quickly, and accept this means a faster rate of population ageing. Or is there a level of net migration that, combined with our falling rate of natural increase, would give us a more gradual and more manageable rate of decline, albeit with a larger population and a less severe rate of population ageing?

Mike Seccombe is right to point out that Australia and Japan have historically been at polar extremes on immigration, but his argument about the two countries goes off the rails from that point on.

With a higher fertility rate and a much higher rate of immigration targeting younger immigrants, Australia has aged much more slowly than Japan. As the chart shows, while our working age to population ratio has remained relatively stable since 1990, Japan’s has fallen almost 10 percentage points. The paths of the two economies since 1990 have been starkly different. Many factors are at work, of course, but the relative difference in the rate of ageing has been a significant driver. The crucial indicators are not growth in gross domestic product, or indeed per-capita growth in GDP (though Australia has performed much more strongly on both counts). From an ageing perspective, the really important indicators are:

The employment to population ratio: Australia’s ratio has increased from 57.2 per cent in 1991 to 61.2 per cent in 2014. Japan’s has fallen from 62.4 per cent to 56.9 per cent. The economic, budgetary and societal implications of this shift are significant and have been driven largely by ageing.

Real wages: Adjusted for purchasing power, these have increased in Australia from US$37,504 in 1990 to US$50,167 in 2015 but only from US$35,327 to US$35,780 in Japan. This is quite contrary to the argument that immigration must always put downward pressure on real wage growth. Well-targeted immigration can achieve the opposite effect.

Household spending: This indicator grew at a rate of 3.31 per cent per annum in Australia while in Japan it increased at only 1.14 per cent. Because private spending among older people is significantly lower than among younger people, ageing weakens private aggregate demand. Persistently weak aggregate demand, exacerbated by high levels of household debt and rising inequality, will be a feature of developed economies for the foreseeable future.

Government debt: Public-sector debt increased in Australia as a portion of GDP from 45.9 per cent in 1999 to 67.6 per cent in 2015. In Japan it increased from 133.2 per cent to 246.6 per cent. The research consistently highlights the negative impact of ageing on government budgets. Because of ageing, Japan’s recurrent government expenditure as a portion of GDP is much higher than Australia’s. In other words, Japan’s government debt is getting worse at a faster rate.

Finally, by highlighting the very small number of refugees Japan takes in, Seccombe implies there has been no change in Japan’s approach to immigration. While the Japanese government has not made a song and dance about it, immigration to Japan has been rising. Between 1995 and 2000, Japan’s net migration rate was negative 0.2 per thousand population. The UN Population Division reports that Japan has steadily increased this to positive 0.6 per thousand in the period 2010­–15. Net migration to Japan in 2015 was around 170,000 and the foreign population was at the record level of 2.2 million. A new record was set in 2016 for the total number of long-term and permanent arrivals, at 428,000.

In 2012 Japan also introduced a points-tested category for highly skilled migrants similar to Australia’s. The arrangements were streamlined in 2017 to allow for faster access to permanent residence for such migrants.

Given Japan’s demography, its government is at last facing up to the reality of having to run a sizeable migration program. As in Australia, the bulk of foreigners in Japan are on work visas or student visas, or are the spouses of Japanese citizens.

While Japan’s economy improved a little in recent years, this follows massive levels of “quantitative easing,” negative interest rates, eye-watering levels of government debt and significant dissaving by its growing aged population. This is not a sustainable strategy. No country can maintain living standards if its employment-to-population ratio continues to decline sharply. Japan must use targeted immigration to deal with its demographic challenges — it’s just a matter of arithmetic and biology.

Australia would be shooting itself in the foot if it blindly headed in the opposite direction, especially if the cuts in immigration were to target young and highly skilled migrants. ●

Abul Rizvi was a senior official in the Department of Immigration from the early 1990s to 2007 when he left as Deputy Secretary.