Small-target health policy gets off to a shaky start 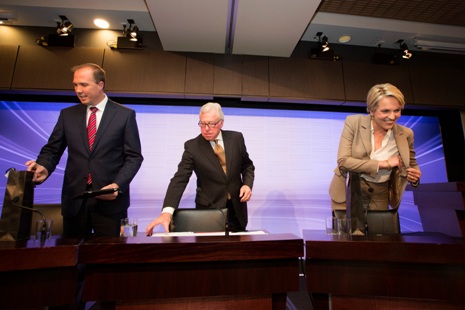 Hit the ground running? Incoming health minister Peter Dutton and his predecessor, Tanya Plibersek, at the conclusion of the election health debate at the National Press Club on 27 August.
Penny Bradfield/ AAP Image

ALTHOUGH healthcare didn’t feature strongly in the election campaign, attention is now turning to how Tony Abbott and his cabinet – and specifically his health minister, Peter Dutton – will manage this key portfolio, which consumes 16.2 per cent of the federal budget.

In the lead-up to the election the Coalition made broad pledges to maintain health expenditure and increase support for biomedical research. It also made a few specific commitments to fund projects and programs, including a national centre for youth mental health and an expanded the national bowel cancer screening program. But beyond “no surprises, no excuses,” there was no vision for future directions in health and aged care, and delivering on all commitments is subject to how the government interprets overall budget numbers. We are left to divine the tea leaves.

One indication of where the Abbott government stands on healthcare is the fifty-page Real Solutions for All Australians, though this is more a glossy brochure to promote the Coalition and outline Labor’s failures than a policy document. Health commitments amount to a single page listing six commitments: improving the performance of public hospitals at the local level; improving mental health services; funding diabetes research; improving access to medicines; improving private health insurance; and bringing dental into Medicare.

The Coalition’s Policy to Support Australia’s Health System, released in August 2013, is also more about politics than policy. It commits $340 million over the next four years to healthcare initiatives and biomedical research, but doesn’t represent any advance on the ideas promulgated in Real Solutions, or indeed on the themes that the Coalition campaigned on in 2010. The funds it committed to healthcare and biomedical research during the election campaign are estimated to total $600 million over four years.

We should not be surprised. When Tony Abbott released the policy he described it as “significant incremental change. It’s not a policy for shaking up a system.” It remains to be seen whether his phrase “under-promising and over-delivering” means there are more substantial policies to come. During the campaign, Mr Abbott’s small-target strategy meant that he adopted many of Labor’s policies, even those previously denigrated, such as Medicare Locals.

The Coalition has justified its failure to deliver policy and budget alternatives on the grounds of fiscal caution. Instead, it has promised to act “once fiscal circumstances allow” to reverse current policies and to review current programs.

A closer examination of Coalition policies, explicit and implicit, shows that the significant incremental change promised is more a case of “back to the future.” At a time when new ways are needed to deliver and pay for healthcare services – a health-in-all-policies approach, doing prevention better, tackling health inequalities and putting empowered patients at the heart of the healthcare system – Australia is headed back to the ideas of last century. The focus is on hospitals and acute care, boosting the profits of the pharmaceutical industry and private health insurers, and more doctors and nurses. The title of the Coalition’s policy says it all – it’s about supporting the health system, not about supporting patients.

The stated policy priority is to improve the performance of public hospitals by creating local, community-controlled hospital boards and improving cooperation with the states and territories. Abbott has an interesting history in this area, with several policy flip-flops. Apparently his support for this approach is based on his experience with the local community’s “rapturous” response to the Commonwealth takeover of the Mersey Hospital in 2007. He had previously gone so far later as to claim that “the only big reform worth considering is giving one level of government – inevitably the federal government – responsibility for the entire health system,” only to quickly retreat in the face of prime minister John Howard’s disapproval.

This idea was still being mooted in February 2010 when, in an effort to trump Kevin Rudd’s key election pledge to consider a federal takeover of public hospitals, Abbott proposed direct Commonwealth funding, but not control from Canberra, for public hospitals.

For now, the new government is set to keep Labor’s National Health Reform Agreement with the states and territories, which was signed in 2011. This will require that the work done by agencies such as the National Health Performance Authority, the Administrator of the National Health Funding Pool, and the Independent Hospital Pricing Authority continues, even if these agencies are abolished as threatened.

It will be interesting to see how, and even if, the commitment to local hospital boards is implemented. There are 737 public hospitals in Australia and the establishment of 737 new hospital boards seems curiously at odds with the Coalition’s support for reduced bureaucracy and increased efficiencies. Not only would this reform impose an increased administrative burden on hospital management, but it would also encourage wasteful duplication and establish hospitals as competitive fiefdoms rather than partners in an integrated health system.

If the real aims are to shape local service delivery according to local needs and ensure that hospitals are accountable for treatment outcomes and able to make active decisions about the control of their own budgets, then that is precisely what the 136 Local Hospital Networks are about. Each managed by a governing council, these are independent legal entities – established under the Health Reform Agreement – designed to give clinicians a stronger voice in the running of the services, promote more direct consumer involvement, and connect to the new Medicare Locals and community health services.

The new proposal seems like change for change’s sake, and ignores how expensive and time-consuming organisational restructuring can be. Private hospitals – which receive substantial federal funds directly through Medicare and the Pharmaceutical Benefits Scheme, and indirectly through the private health insurance rebate – won't need to meet the same standards.

With effective guidance and oversight, the Local Hospital Networks, together with Medicare Locals, have the potential to achieve better quality and safety, better patient outcomes and better care coordination. Building such an integrated system and ensuring its sustainability would be an important legacy, if the Abbott government chose to take this direction. In such circumstances health minister Peter Dutton would find that the recent Berwick report to the National Health Service gives some key pointers, in particular, that the system should “engage, empower, and hear patients and carers throughout the entire system, and at all times.”

It is clear, though, that the major focus of the healthcare system must be further upstream, with improvements in prevention and primary care. The fate of Medicare Locals remains uncertain, pending a review under way at the moment. If they are to be dismantled, there is no indication of what would replace them in the coordination of primary care and support for healthcare professionals who work in primary care. Would there be a return to the Divisions of General Practice? More likely, if Medicare Locals are in disfavour, they will be starved of resources, thus ensuring their ultimate failure.

But the heat has gone out of the new government’s argument that means testing would mean that “about six million Australians will downgrade or abandon their private health insurance as a result of this means test.” Membership has in fact increased and is higher than at any time during the Howard government.

It’s hard to believe that the Coalition will permanently abandon such a long-held, strongly voiced policy. But any reversal will be expensive; Labor says the reinstatement of a non-means-tested private health insurance rebate would cost an extra $8 billion over four years.

It is very likely we will see an increased push from the private health insurance industry to expand into new areas, such as covering the gap between Medicare reimbursement and the doctor’s fee. Given this would potentially be even more inflationary and inequitable than the Extended Medicare Safety Net, there is reason to be grateful that modelling will undoubtedly show this change would increase the cost of the rebate, already one of the twenty most expensive programs in the budget, with costs predicted to rise over the forward estimates.

There is growing evidence that out-of-pocket costs limit Australians’ access to healthcare and their ability to comply with treatment regimes, contributing significantly to health disparities and inequities. This issue was not mentioned in the election campaign. Will it emerge as part of the government’s commitment to have the National Mental Health Commission review mental health services – or is this review just about no duplication or unnecessary red tape, as stated? Potential changes to dental care programs also have the potential to reduce or aggravate disparities. The Coalition says that eventually it will include adult dental health services under Medicare. That could mean a return to the Howard government’s Chronic Disease Dental Scheme; cost considerations make it unlikely that a Medicare-funded scheme would be universal.

Out-of-pocket costs could also be affected by whatever changes the government makes to the Pharmaceutical Benefits Scheme. Peter Dutton has criticised the previous government’s policies to bring down the cost of the $9.6 billion PBS, saying that Labor had “starved us of some opportunity for investment in this country.” But those savings, linked to patent life, have allowed the listing of new, expensive medicines, and the case has been made that there is room for more savings in this area. In the past, as health minister, Abbott has not always followed expert advice on what vaccines and medicines should be listed, so any new commitments on this issue should be regarded with caution.

I HAVE previously commented that, in the absence of new policies, the real issue will be whether the new government will build on the reforms already under way, tear them down, or leave them languishing for lack of attention and resources. Already we can see the last option coming into play with aged care. In opposition, the Coalition largely backed the aged-care reform package that was the centrepiece of the 2012–13 Budget. But the new government has already indicated that its focus will be more on the financial health of providers than on the health of the elderly – it will relax aged-care regulations and eliminate red tape, allow longer for accreditation, and claw back $1.2 billion that Labor had allocated for pay rises for aged-care workers. Seniors groups have attacked these moves, arguing that they will worsen the current crisis in aged care. The responsibility for aged care now resides with Mitch Fifield, assistant social services minister. This portfolio change may help with ensuring needed social services for older Australians, but for the first time aged care has been separated from healthcare.

Dutton was recently quoted as saying that “John Howard gave me the best advice, and that is to use your time [in opposition] productively, and to work though good policy so you can be in a position to hit the ground running if you are successful at an upcoming election.” It seems unlikely we will see any evidence of this preparation in the immediate future, as government attention is focused on what it sees as more pressing matters. My prediction is that the 2014–15 budget should make interesting reading.

Like Australia, Germany has seen a shift in the political middle ground. But there, it’s ended up in an intriguing place, writes Klaus Neumann 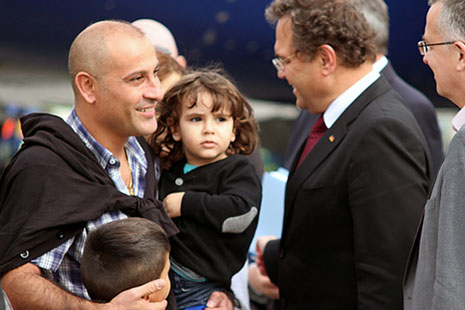