Would a stronger prime minister pull Peter Dutton into line? 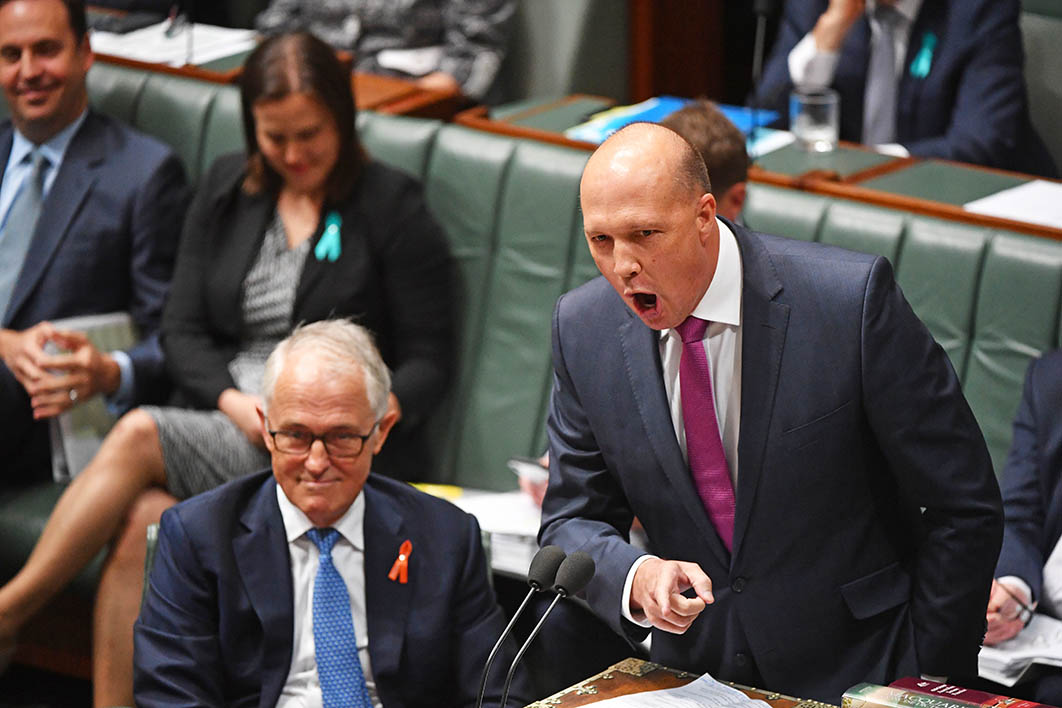 For someone who is supposed to be inside the cabinet tent, Peter Dutton gets away with a lot of freelancing.

It’s one thing for backbencher Tony Abbott, a former prime minister nursing a damaged ego, to set himself up as an alternative leader. There’s nothing anyone can do about that. While the home affairs minister isn’t as brazen, he does have a tendency to make things difficult for his colleagues — not quite contradicting government policy but adding bits on, inserting inflammatory statements, creating headlines. And he does it with impunity.

Early this year he led the federal government’s attack on Victoria’s “African gang crisis,” apparently because there’s an election there in November. People were afraid to leave their houses, Dutton thundered. Whether or not this was a concerted government strategy, he went further than his colleagues and left them having to explain what Peter meant. More recently he went completely off the reservation, ruminating on a plan to fast-track visas for white South African farmers, pointedly contrasting that country with “civilised” Australia. Foreign minister Julie Bishop had the job of mopping up.

Under normal circumstances, a prime minister would haul a self-indulgent subordinate over the coals — stick to the script, get on with the job — but we don’t live in normal times. The most precarious prime minister in living memory, Malcolm Turnbull grins and bears it. In this way, Dutton’s shenanigans are yet another symptom of the strange political climate we exist in.

There’s a tendency among political observers, particularly his opponents, to cast Dutton as a crafty political operator, a man of immense subtlety to whom there is much more than meets the eye. Yet the evidence is elusive. As health minister he earned little applause — even from commentators sympathetic to the government’s aims — as a generator of ideas, a salesman or an effective negotiator. The immigration portfolio transformed him, as it did his predecessor Scott Morrison, into a household name, a recognised “tough guy” and — among a tiny cohort of the population — a folk hero.

Dutton was a prime mover behind last year’s same-sex marriage postal survey. When that plan was announced, many equality supporters quivered, believing that a voluntary survey (rather than a compulsory plebiscite) would skew towards the status quo. Why else, after all, would the cunning Dutton devise it?

It turned out, according to opinion polls, that opponents of gay marriage were less likely to participate than supporters were. Oops.

With surveyed Yes support starting way in front, the No campaign’s challenge was to grind its opponents down over the course of the campaign. But most respondents returned their forms in the first week, before either side had shifted into second gear. D’oh!

In public, Peter Dutton doesn’t give much away. It might be a case of still waters running deep, or perhaps what you see is what you get. The off-mic glimpses we’ve been given — Dutton ingratiating himself with then prime minister Abbott with chortles about climate change in the South Pacific and “Cape York Time” (to which Abbott laughed obligingly), and that “mad fucking witch” text message accidentally sent to a journalist — flesh the character out, but only a little.

Many on the left lament his “dog-whistling.” That hackneyed phrase, signifying subliminal messaging to one group while the rest remain oblivious, implies political finesse and, most importantly, some kind of success. But Dutton doesn’t seem to have done much for the government’s position or his own standing with the general population.

The “white farmers” meme — our white brethren need rescuing from the barbaric hordes — with the implication, spoken or otherwise, that perhaps it’s time to admit our opposition to apartheid was a mistake, had been bubbling in right-wing internet circles for some time, and seems to have arrived, or at least solidified, in Dutton’s consciousness via a couple of News Corp columnists. As far as I know he is the only senior member of a Western government to expound on it publicly. Not even Donald Trump has succumbed to the temptation.

Not to be left behind, Tony Abbott — perhaps in preparation for Tuesday’s double act with Pauline Hanson — furiously, if belatedly, agreed.

Dutton is adored by the rabid right, fawned over on Sky News (“Good stuff. You put steel in the government’s spine,” gushed Paul Murray in a typically chummy interview on Monday) and on a few chosen radio programs that cater mostly to older conservative males. They, like many ideologically committed campaigners of various stripes, project their own convictions onto the general population; for them, the minister’s soundbites are good politics, and if only the wimpy Turnbull would follow suit, the government wouldn’t be in all this trouble.

Yes, “prioritise white farmers” is a signal, a tug at the heart strings, a longing for a simpler, more homogeneous time. Depending on the survey wording, you might even get a majority of voters supporting the idea, but its strong emotional appeal is restricted to a tiny portion of the electorate, outside which it remains a fringe issue. It won’t rescue the government, change many votes or elevate Dutton’s standing as preferred Liberal leader (and hence prime minister), which remains stubbornly in single digits.

Rather than try to divine dastardly genius in Dutton’s actions, it might be more realistic to see him as someone who lets his ideological inclinations get the better of him. He evidently doesn’t get out much, avoids the ABC (they’re “dead to me” he announced last week), prefers the adulation of friendly media outlets and perhaps forgets, or doesn’t understand, that there’s a wider world out there.

Yet even he probably realises he went too far when he more or less called a major African nation “uncivilised,” and he probably knows that it’s damaged his leadership prospects among his parliamentary colleagues.

Dutton is a symptom of the current fragile political climate and enfeebled prime minister. He is perhaps the closest we have in senior circles to a Trump-like demagogue. It’s just possible, though unlikely, that he’ll become prime minister before the next election.

But the electoral and economic cycle favours Labor, and as long as that party’s leaders avoid John Hewson’s fate of drowning in policy detail, the Dutton prime ministership would not last long. It could even be argued such a contest would do the country good. ●