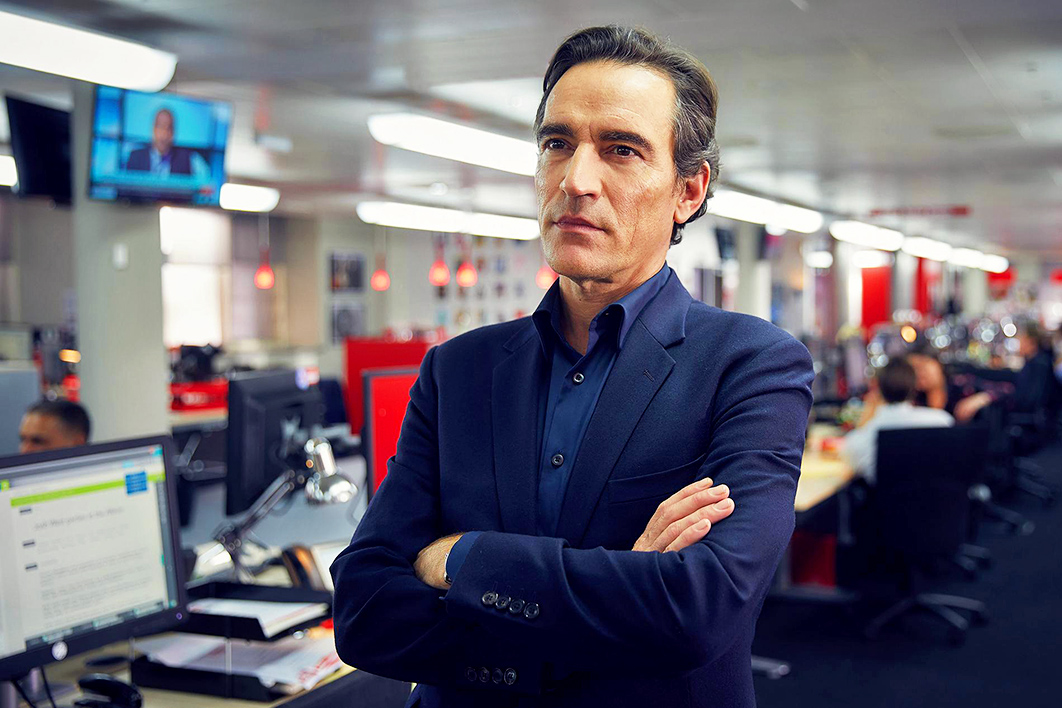 In retreat from the heatwave this week, I spent an afternoon at the cinema seeing Vice, Adam McKay’s new film about Dick Cheney, then binge-watched several episodes of the BBC One series Press at home. It was a concentrated exposure to different forms of contemporary villainy.

“One may smile and smile and be a villain,” as Hamlet says of his smooth-talking uncle, Claudius, who has engineered a successful power grab in the kingdom of Denmark. The secret of political villainy, as distinct from the kind of villainy that fuels crime dramas, is the capacity to maintain a certain kind of ease. One of Cheney’s key attributes, according to Vice, was his ability to make an outrageous suggestion in a totally relaxed way.

The central character in Press is Duncan Allen, editor of a leading tabloid. Played by Ben Chaplin, he is in many ways Cheney’s antithesis: lean, agile, flamboyant, seductive and flippant. His behaviour as he flounces around in the designer-themed offices of the Post is one step away from stand-up comedy. If David Brent of The Office were reborn in his dream identity, he’d be Duncan Allen.

Allen thinks at lightning speed and never misses a trick. In the opening episode, we see him just back from New York, ascending a glass elevator in the Post building. As he walks through the open-plan office, he’s approached by a succession of people with urgent matters to impart. One hands him a phone on which a government minister is waiting. Allen is about to ruin her career, a matter that takes up most of the episode and establishes him as a thoroughly ruthless and devious operator. Later we see him in a meeting room at 10 Downing Street, vying with the prime minister over who really calls the shots.

Since the Leveson inquiry of 2011–12, we’ve all known that editors of the Murdoch tabloids had their own backdoor to Downing Street and did indeed expect to call the shots, not just on how the government’s public image was to be managed but also on matters of policy.

The policy aspect doesn’t get much attention in this series, which explores the dynamics of the rivalry between the Post and the Herald, modelled respectively on the Sun and the Guardian. The two papers are essentially chasing the same stories: the suicide of a young footballer, a hit-and-run incident involving a police car, sexual harassment allegations against a high-profile celebrity, and a scandal surrounding Carla Mason, secretary for work and pensions and government spokesperson on women’s affairs.

It’s all spin, scandal and social issues. Later, the stakes are raised with a story from an MI5 whistleblower (with obvious echoes of the Snowden affair), but the series curiously avoids portraying regular political reportage. While it shows real nerve in taking on some of the most vindictive and destructive operators in British politics, what goes on in government is not part of the story.

Press aims to dramatise journalism in the contemporary world, but this is a world that moves fast, and the attempt to portray it gets tangled in anachronism. The Leveson inquiry, evoked in a very effective scene early on, took place seven years ago. Carla Mason might be a minister in a late-term Blair–Brown government or the early years of David Cameron, but since Jeremy Corbyn took over as Labour leader in 2015 the political dynamic in Britain has changed beyond all recognition. Against the fallout from Brexit, most of the stories so earnestly chased by the rival newspapers in Press are of minor concern in the larger scheme of things. The political climate is now very much more fraught than it was five years ago, and the media are if anything more intensively involved than ever before.

Perhaps this is why the BBC has (apparently) stalled on plans for a second season. That’s a shame. Press has strong appeal as television drama. Mike Bartlett’s script is crisp and stylish, alternating passages of fast-paced, edgy dialogue with exchanges in which the key players size each other up, holding their fire as they figure out a new angle of attack.

Bartlett establishes a strong dramatic structure, playing with the assumed bipolarity of tabloid and “quality” journalism in ways that blur their boundaries. The Post, with its vibrant red logo, and the Herald, badged in faded blue, occupy buildings diagonally opposite each other. Both are losing money, but the Post, bankrolled by media mogul George Emmerson (David Suchet), has a spanking new office fit-out, while staff at the Herald have to fuss with broken water coolers and mouse traps.

In compensation for its position as the underdog in the commercial hierarchy, the Herald occupies the ethical high ground. That, at least, is the equation assumed by its editor Amina Chaudury (Priyanga Burford) and her team of serious-minded and dedicated journalists, headed by Holly Evans (Charlotte Riley) and James Edwards (Al Weaver).

While Chaudury, seeing the imminent demise of her newspaper, sets out to transform the business model, Allen, under instructions from Emmerson to engage in some “real journalism,” sets out to poach Evans. The battle between the two camps is deepened by cleverly woven tension lines. At times it is like a peak chess game, with Evans and Allen making ingenious moves in a sophisticated play for the upper hand.

The critical dialogues take place in St Bride’s Church, a fine Christopher Wren building in Fleet Street known as “the journalists’ church.” Heritage and the professional traditions of journalism are at the thematic heart of the series. The buildings occupied by the two newspapers are on the edge of the Clerkenwell precinct, with its paved alleyways and sixteenth-century arches, and the characters weave between the older and newer worlds of London as they go about their assignments.

Allen emerges as by far the most fascinating character in the drama, a moral shape-shifter whose motivations are much less easily defined than they seem. He even strategically outclasses Emmerson, the Murdoch figure. Is he a villain? He’s a master of betrayal, deception and manipulation. He’s also shrewdly cynical, taking the scalpel to other people’s self-delusions and indulging in none of his own.

In the first episode, after a teenage football star commits suicide, he sends a young reporter to get the family’s reaction to evidence that the boy was gay and afraid to come out. That might be news to them, objects the reporter, and I don’t want to be the one to break it. “If it’s news,” Allen quips with toneless sarcasm, “that’s our remit.”

Forms of villainy that involve ruining lives rather than killing people have a special kind of fascination. Those who are especially skilled in this way are often adept at staying on the right side of the law. Dick Cheney is a real-life version of the type. It includes many of the great characters in literature and drama: Shakespeare’s Iago, Jane Austen’s Lady Catherine de Bourgh, Thackeray’s Becky Sharp, Dickens’s Uriah Heep. What they all have in common is that they are creatures of their times, exploiting and so exposing the pathologies of the social and political worlds they inhabit. •

Build it and they will come

With looming retirements and on-the-nose MPs, there’s a good chance the crossbench will be bigger after this year’s federal election 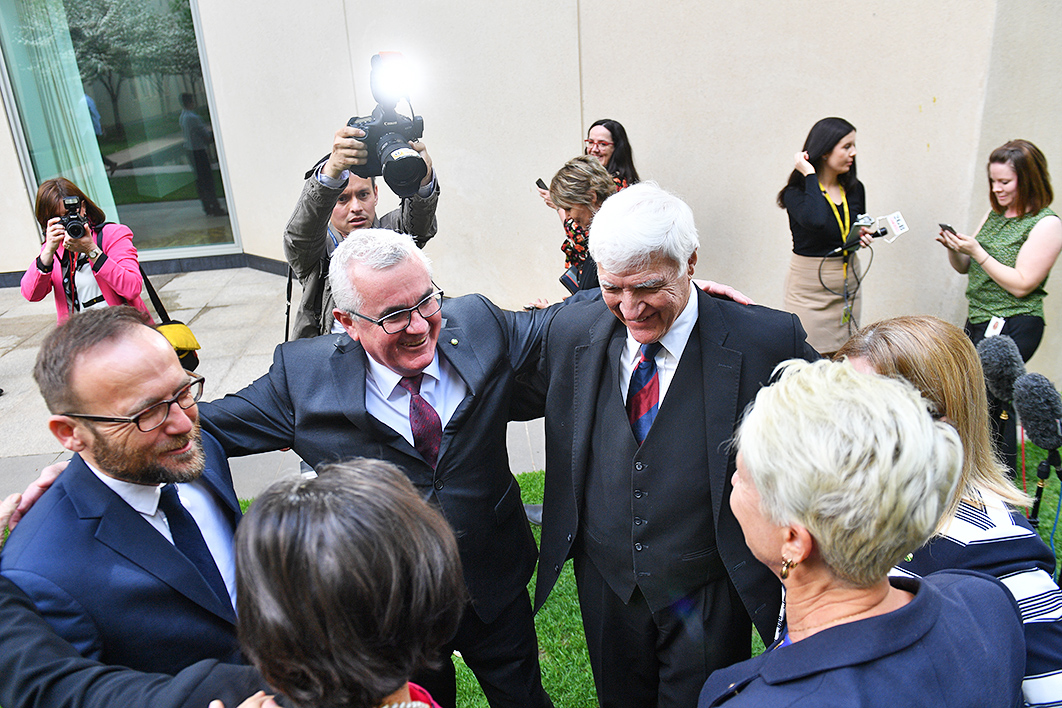