Sound and fury, light and shade

Television | With just days to gather its material, Four Corners found a way to explore the human impact of power 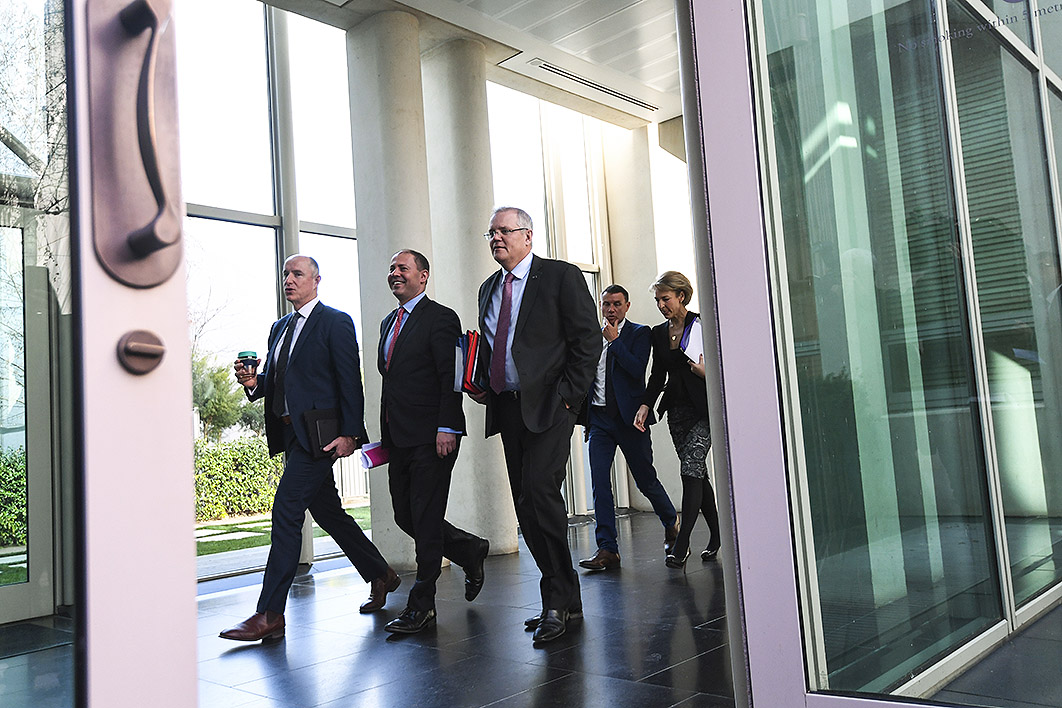 In the early stages, the move against Malcolm Turnbull had all the appearance of what we call a coup. Following his near-miss first challenge on Tuesday, Peter Dutton began behaving as if the next stage of the proceedings was a fait accompli. The image that captured him talking by phone in the back seat of an official car behind two security officers had a sinister edge. We were confronted with the prospect of a new prime minister hardly ever seen with an expression on his face, whose chief political champion was “Wrecker” Tony Abbott. Journalists who had been blithely predicting exactly this eventuality appeared before the cameras confused and ashen-faced.

It was compelling television across all TV networks. Stories were breaking from every side, and some of the most explosive revelations didn’t originate in the house on the hill. A stunning monologue from Nine’s political correspondent Chris Uhlmann on Thursday morning denounced journalists from News Corp, Sky News and 2GB for waging war on the prime minister and playing an active role in the campaign.

On Monday this week, Kevin Rudd went a step further in an incendiary article for Fairfax, taking aim at Tony Abbott — “this giant wrecking ball of Australian politics” — and Rupert Murdoch — “the greatest cancer on the Australian democracy.” Later in the day, the now ex–prime minister’s son Alex Turnbull claimed that the Liberal Party was being hijacked by the mining lobby, making it “impossible to vote for the LNP in good conscience.”

Amid all this, the widely advertised Four Corners special raised much anticipation. With the nation’s premier team of investigative journalists on the case, what would be the angle? Did they have another scoop? The short answer was no. From that perspective, the program might have generated some disappointment, though judging by the Twitter feed, the primary response was disgust — not at the program, but at the attitudes and behaviour of the political players.

Yet there was no lack of drama, and theatrical declamations flew thick and fast. “The government lies in ruins.” “It’s an ideological blood feud.” “It’s about bitterness… acts of revenge.” “Rome is officially burning.” Was this Julius Caesar or Macbeth? Barnaby Joyce, whose redneck image belies his range of language, may have spoken truer than he purposed with an admission that it was a matter of “having to work in that darker politics” and “Parliament House… by its very nature, it has a nefarious aspect.”

Following the second spill, Turnbull made his entry into the courtyard in an immaculate blue suit to deliver one of his better performances. He was going to hold the moral high ground for a while longer, enforce protocol, call out the bullies and dissociate himself from the madness. This was where he at last found his fight, observed Guardian correspondent Katharine Murphy. He came to “lay out the terms of his execution.”

It was a scene most of us would have watched before, but this time we were seeing it from other angles. Throughout the program, politicians were filmed from behind, from above, through windows and doorways. In a kind of leitmotif, the dramatis personae were repeatedly seen walking the corridors, their figures reflected in the shining floors.

Romaldo Giurgola’s serene building has nothing nefarious about it. It is transparent, balanced, open and filled with light. Through the comings and goings of a crisis, with people arriving at dawn and still stalking its corridors as the sun sets, the frames of its architecture are a constant. Even at night, when the dark cars pass through its green floodlights as they cruise in for the “last supper,” the building itself seems to stand apart from the madness that has broken out inside it, a greater and more enduring presence than any of its occupants.

Four Corners used many of the documentary techniques so effectively deployed in The Killing Season, Sarah Ferguson’s fine series about the Rudd–Gillard feud. In that series, there was no voice-over and no forced narrative momentum. It’s essentially a quiet style, built up with adept choices of focus, restrained editing and shrewd camera work.

There are intermittent close-up shots of a clock face. Events are moving fast and furiously, and yet the hand on the clock tells every second with a subtle jolt as it makes its way around the dial. Behind closed doors, people talk to the camera. Concetta Fierravanti-Wells, in the forefront of the assassins’ team, reflects on the turning points of the drama: the fatal thirtieth Newspoll that marked Turnbull’s failing of the test he himself had applied to Abbott; and the same-sex marriage vote, which she insists was a betrayal of “the base” and an opportunity given to One Nation. “We were bleeding votes to the right,” she comments.

A different side of the story comes through Sarah Henderson, a Turnbull loyalist. Standover tactics were used in the bid to get the critical forty-three signatures on Dutton’s demand for the spill, she says. She was also offered a ministry, but “it would not have been the right thing to do.”

Those interviewed are all from the supporting cast: Craig Laundy, the last man standing by Turnbull’s side; Barnaby Joyce, the disaffected offsider; the National Party’s Kevin Hogan, who vowed to go to the crossbench in protest against the whole shenanigans. And then there are the bystanders and commentators: Katharine Murphy, Andrew Bolt and Alan Jones, and the party elders, including Alexander Downer, Nick Greiner and Jeff Kennett, offering overarching perspectives.

Given the short turnaround time for this program, it’s no surprise that the leading players are only seen at one remove, through recordings of their public statements. Why didn’t the producers wait some months, as they did with The Killing Season, to allow time to get interviews with Dutton, Abbott, Turnbull, Cormann, Bishop and Morrison? Perhaps there’s a follow-up to come.

As a standalone program, this was a strange hybrid, a creature born of compromise and well-honed technical skills in the editing department. It was Shakespeare without the literary genius, The West Wing minus the witty repartee, House of Cards without the brooding charisma. The events themselves might go down as “a tale told by an idiot, full of sound and fury, signifying nothing.” And yet something Shakespearean is captured here. By slowing the pace behind the hurtling course of action, the Four Corners team found a way of exploring the effects of power on human psychology. It is, for the most part, an ugly spectacle. But so is Macbeth. •