Speaking to the world 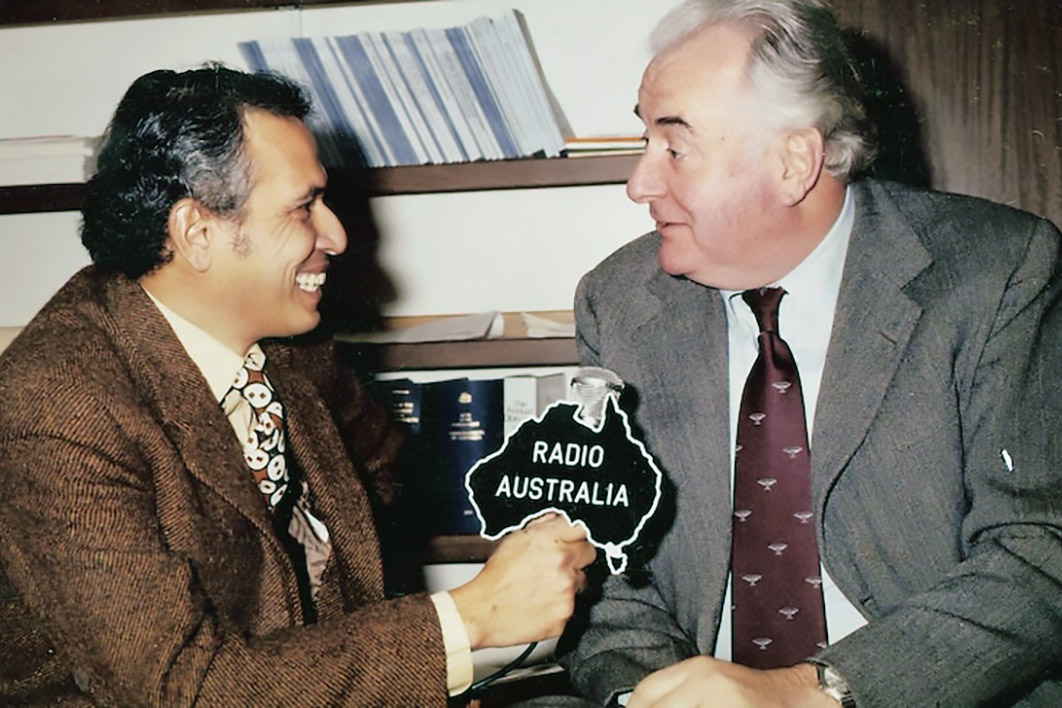 Radio Australia was conceived at the beginning of the second world war out of Canberra’s desire to counter Japanese propaganda in the Pacific. More than seventy years later its rebirth is being driven by a similarly urgent need to counter propaganda, this time from China.

Set up within the towering framework of the ABC, Radio Australia was, and remains, an institution with a lively multilingual culture of its own. Sometimes it has thrived and sometimes, especially in recent decades, it has struggled as political priorities and media fashions waxed and waned within the ABC and the wider world.

Phil Kafcaloudes, an accomplished journalist, author and media educator who hosted Radio Australia’s popular breakfast show for nine years, was commissioned by the ABC to write the service’s story for the corporation’s ninetieth-anniversary celebrations. The result is a nicely illustrated and comprehensively footnoted new book, Australia Calling, which uses the original name of the service for its title. (With appropriate good manners, Kafcaloudes acknowledges previous accounts of the Radio Australia story, by Peter Lucas in 1964 and Errol Hodge in 1995.)

The overseas service’s nadir came in 2014 after the election of the Abbott government. At the time, Inside Story’s Pacific correspondent Nic Maclellan described in devastating detail the impact in the region of the eighty redundancies brought on by the government’s decision to remove the Australia Network, a kind of TV counterpart to Radio Australia, from the ABC. The network had controversially been merged with key elements of Radio Australia to create ABC International.

Among the casualties was the legendary ABC broadcaster Sean Dorney, known and loved throughout the Pacific. Programs for Asia were axed, as was much specialist Pacific reporting, with English-language coverage to be sourced from the ABC’s general news department.

The ABC’s full-time team in the Pacific was reduced to a journalist in Port Moresby and another (if it counts) in New Zealand. Australia’s newspapers had already withdrawn their correspondents from the region, and online-only media hadn’t filled the gap. Where once, in 1948, Radio Australia had helped beam a signal to the moon, the countries of our own region now seemed even more remote.

Despite the steady erosion of the service over decades, though, Kafcaloudes’s book has a happy ending of sorts. Its final chapter, titled “Rebirth: Pivoting to the Pacific,” tells how Radio Australia benefited from the Morrison government’s “Pacific Step-Up,” launched in response to China’s campaign to build regional connections. Steps to rebuild Radio Australia’s capacities have since been enhanced by substantial new funding from the Albanese government.

When current affairs radio is at its most effective, it places listeners at the scene. Kafcaloudes tells of being on air when a listener in Timor-Leste called to tell of an assassination attempt on José Ramos-Horta and Xanana Gusmão. “Radio Australia instantly changed its scheduling to broadcast live for three hours so locals would know whether their leaders were still alive.”

But, as Kafcaloudes explains, “for all the good work, global connections and breaking news stories, the truth is, for many Australian politicians there was little electoral capacity in a service that a domestic audience did not hear.” Thus the abrupt funding reverses and the constant tinkering.

Former ABC journalist and manager Geoff Heriot describes how, during a challenging phase for the ABC about twenty-five years ago, managing director Brian Johns’s desire to defend the ABC meant that, “if necessary, you could cut off limbs.” And Radio Australia was the limb that often seemed most remote from the core.

Back in the 1950s and 1960s, Kafcaloudes says, the service “was often at or near the top of the polls as the world’s best.” Many listeners, especially in China and elsewhere in East Asia, testified to having learned English from listening to Radio Australia. Its popularity in Asia and the Pacific was boosted by the fact that it broadcast from a similar time zone, which meant its morning shows, for instance, were heard during listeners’ mornings. In 1968 alone, the station received 250,000 letters from people tuning in around the region.

For decades, broadcasts were via shortwave, the only way of covering vast distances at the time. But the ABC turned off that medium for good in 2017, so Radio Australia now communicates via twenty-four-hour FM stations across the Pacific and via satellite, live stream, on-demand audio, podcasts, the ABC Listen app, and Facebook and Twitter.

With new audiences emerging in different places, the geography of Radio Australia’s languages have changed too. As the use of French in the former colonies in Indochina declined, for instance, new French-speaking audiences developed in the Pacific colonies of New Caledonia and French Polynesia.

One of the continuities of Radio Australia is the quality and connectedness of its broadcasters. Most of them come from the countries to which they broadcast, and together they have evolved into a remarkable cadre who could and should be invited by policymakers and diplomats to help Australia steer and deepen its relations with our neighbours.

Kafcaloudes rightly stresses the importance of that first prewar step, when Robert Menzies, “a man who believed he was British to the bootstraps, despite being born and bred in country Victoria,” decided “Australians needed to speak to the world with their own voice.”

How best to do this has frequently been disputed. In a 1962 ministerial briefing, the Department of External Affairs argued that Radio Australia’s broadcasts “should not be noticeably at variance with the broad objectives of Australian foreign policy” — an instruction that John Gorton, the relevant minister, declined to issue publicly.

Tensions have inevitably resulted from the desire of the service’s funder, the federal government, to see its own policies and perceptions prioritised. Resisting such pressure has required greater stamina and skill at Radio Australia than at the ABC’s domestic services, which can count more readily on influential defenders.

Kafcaloudes says it was Mark Scott, who headed the ABC a dozen years ago, who linked Radio Australia with American academic/diplomat Joseph Nye’s idea of “soft power.” Then and now, this was a seductive phrase for politicians. It also became a familiar part of the case for restoring, consolidating or increasing funding, while underlining the familiar, nagging challenge for the station’s “content providers” of choosing between projecting that kind of power on Canberra’s behalf and dealing with stories that might well be perceived as “negative” for the Australian government.

Of course, the conventional public-interest answer to that dilemma is that fearless journalism is itself the ultimate expression of soft power by an open, democratic polity. But not everyone sees it that way.

The public broadcasting ethos of the station’s internationally sourced staff has meanwhile stayed impressively intact. Kafcaloudes introduces one of them at the end of each chapter, letting them speak directly of how they came to arrive at Radio Australia and their experiences working there.

Running Radio Australia has been complicated for decades by its being bundled, unbundled and bundled again with television services that have sometimes been run by the ABC and sometimes by commercial stations. Technologies have of course become fluid in recent years, freeing content from former constraints. So too has the badging — the service is now “ABC Radio Australia,” which morphs online into “ABC Pacific.”

Radio Australia continues to broadcast in Mandarin, Vietnamese, Indonesian, Khmer, French, Burmese and Tok Pisin (the Melanesian pidgin language spoken widely in PNG and readily understood in Vanuatu and, slightly less so, in Solomon Islands), as well as in English.

Dedicated, high-quality journalism remains the core constant of an institution whose story, chronicled so well by Kafcaloudes, parallels in many ways Australia’s on-again, off-again, on-again engagement with our region. •