Sunday I’ve got Wednesday on my mind

Scandals on Capital Hill point to problems in schools, universities and parliament itself 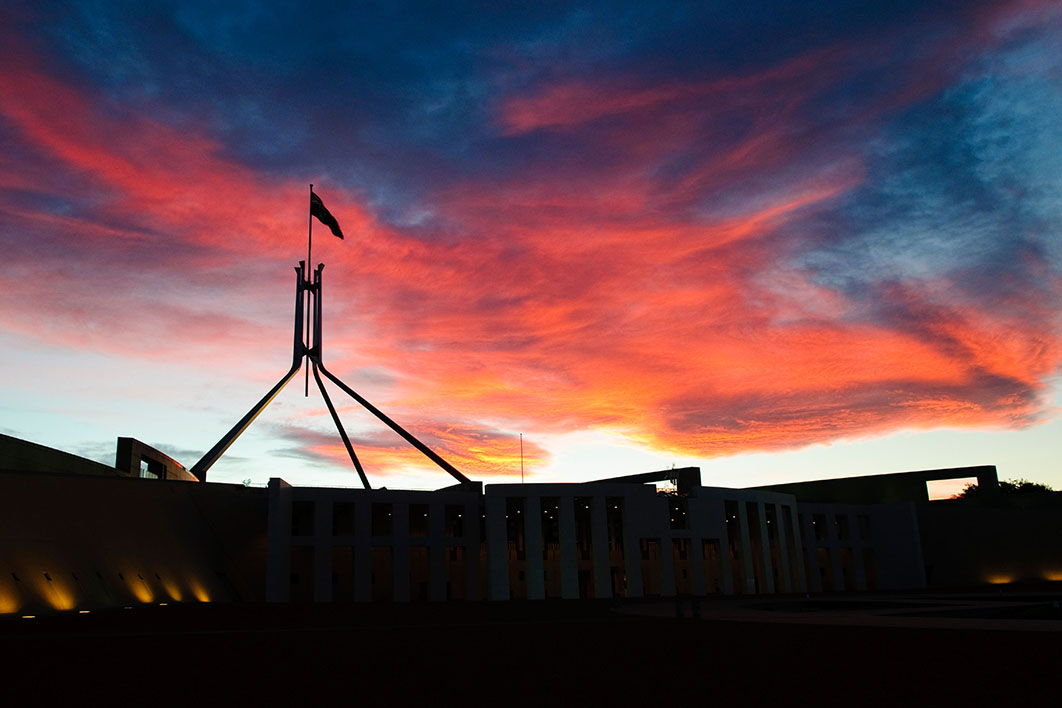 More like Dodge City than a modern workplace? Parliament House at dusk. Alamy

Margaret Simons noticed Parliament House’s shine in her account of the Canberra press gallery, Fit to Print, back in 1999. Flawless lawns and courtyards. Drink fountains with plenty of cups; polished floors and staircases. Workers busily cleaning every nook and cranny so the place looks as fresh and tidy as the day it opened.

It’s not like walking into a Centrelink office or a motor vehicle registry. If you work across the lake at the university, as I do, you’ll probably have heating in your office, but you’d be lucky to have air-conditioning. As an economy measure, they stopped providing office bins years ago.

The main cast on Capital Hill looks good, too. Politics might be show business for ugly people, but many staffers could pass muster on the red carpet. You’ll see women in pencil skirts and heels, men in snazzy dark suits with silk ties. The effect is a halfway house between nightclub and L.A. Law.

At the beginning of a sitting week, usually on Sunday, politicians and staffers descend on Canberra. Most pull long hours and everyone seems to be performing for everyone else. Many will have their eye on their next career step, and quite a few on the several steps after that. Some likely imagine a future victory speech thanking “the true believers” or proclaiming a surprise election triumph a “miracle.”

On Sunday, Monday and Tuesday, they have Wednesday on their minds. That night, they empty into the more glamorous of the restaurants and bars around Manuka, drinking, networking, hooking up. They’re still performing. They still have their eyes on the prize.

The parallels with the latter years of school for teenagers, and with university life, can be striking — a similar sense of newly gained freedoms being tested, of rules being stretched or broken, of jostling for attention and position in a pecking order up for grabs, and in which much is seen to be at stake. It’s no particular surprise that the rape accusation against the Coalition’s Christian Porter that shook Australian politics this week is a story of late school and early university. It’s no stretch to see connections and continuities here.

We are now being permitted to see with greater clarity the dangers in how this culture has evolved, especially its threat to women. The system rewards the kind of thrusting and unscrupulous behaviour that is now all too common in Australia’s decrepit political parties. And it validates a personal aggression that is especially valued when performed by men.

Some politicians themselves also roam this world, rather like feudal barons, as has become clear enough from the revelations of sexual relationships between them and their staffers. Some get right into the party atmosphere, sleeping it off on a couch the next day. Sexual relationships or occasional flings occur among politicians, staffers and journalists, occasionally leading to “and they lived happily ever after” — if not for abandoned spouses and aggrieved children — and sometimes to a less pleasant denouement.

When things go sour, it’s easy enough on this lawless workplace frontier to move those who cease to be flavour of the month — usually female staffers — sideways or even out the door. Some, finding their careers stalled after harsh experience, decide to leave.

Brittany Higgins’s testimony that she was raped by a fellow Liberal staffer has led many women who have worked at Parliament House to tell their own stories. Those that have so far made it into the public sphere have not usually been about rape, but they have covered workplace bullying, sexual harassment and gender discrimination. There appears to be a growing public acceptance of the view that Parliament House is not a safe place for women.

The experiences women recount are often harrowing in their details, but at their heart most come back to two points. One is unchecked power. The other is male domination.

Parliament House is more like Dodge City than a modern workplace. Under the Members of Parliament (Staff) Act, politicians exercise a level of arbitrary power that is increasingly anomalous. In essence, it’s an elaborate racket designed by politicians to serve the interests of politicians.

The arrangements provide those who take advantage of them with a vast pool of free labour — hours chalked up to experience, party service and favours to be conferred in the future. It’s also a system in which people with power are rewarded with the deference of young, impressionable and smart people who call them “the boss” and devote most of their waking hours to doing their bidding.

Everyone who achieves a position of even modest seniority or power in a profession is likely to experience deference. Those with integrity and maturity try to redirect that impulse into a mutual respect that empowers others. No doubt there are many among Australia’s 227 elected federal politicians and their senior staffers who behave responsibly and ethically. But we also know that among them — as well as among staffers who aspire to their jobs — there are the bullies, the foul-mouthed, the greedy, the drunks and the gropers. And there is sexual violence.

There was a time when parliamentary systems didn’t really bother to pretend that those inside the whale were like the rest of us. Take a look at any of the older chambers, such as Victoria’s splendid Legislative Council. It resembles the gentlemen’s club it has been for much of its history, an antechamber to other gentlemen’s clubs still to be found on Collins Street.

But politicians have increasingly sent out the message that they are just like us — only more committed to public service. Anyone with even a glancing acquaintance with modern politics knows this is rubbish. As one former staffer put it to me, they are more likely to be the “weirdo dorks” who flourished in university politics. Or they have had a solid career pumping out propaganda for a think tank. Or maybe they inhabited a union back office. If they worked for a bank, it wasn’t as a teller.

Unchecked power enables both male and female bullies. But Parliament House is a place where much more power is exercised by men than by women. Some carry a well-developed sense of entitlement, nurtured in wealthy families and expensive all-male private schools. It’s telling that at the very time the lecherous and abusive behaviour of adult “boys” on Capital Hill is in the spotlight, so is the sexual exploitation by private school boys of the girls in their social circles.

The most powerful inhabitants of the Potemkin village, immune to serious scrutiny of their singular arrangements in the past, might have given rather too little attention to what the public thinks of this self-indulgence. A little-noticed aspect of the Barnaby Joyce affair of a few years ago was the easy and mistaken assumption that a politician’s private life is his own business, and divorce a regrettable but unavoidable reality of modern life. Perhaps so: but this doesn’t mean that people are also willing to elect as president of the local parents’ and citizens’ association a man who leaves his wife and four daughters for a younger staffer, pregnant by him, at the same time as he opposes marriage equality.

The “anything goes” values of Manuka and Kingston at Wednesday drinks are not those of Australian suburbia. The enthusiastic moralisers of Capital Hill — so evident again in the brutal dealing with the unemployed last month — might be about to receive an overdue taste of their own medicine. One can only hope that the result is at least a safer workplace for women, who have every right to a career in and around politics — and maybe even some grappling with the unenviable task of helping to retrieve the place from the disturbing depths to which it has sunk. •

Also on this topic — Marian Sawer: Dealing with toxic parliaments

Frank Bongiorno is Professor of History at the Australian National University and the author of the award-winning book The Sex Lives of Australians: A History.

Ever the optimist, Ross Garnaut has a plan for Australia’s economic future 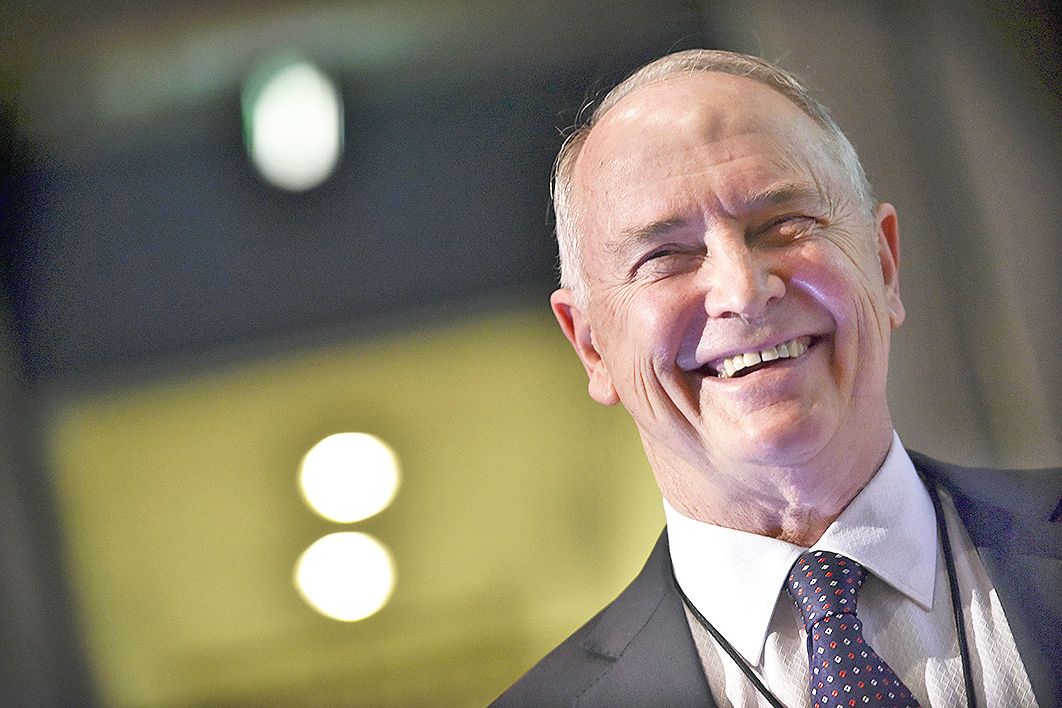