Talking about a moral emergency 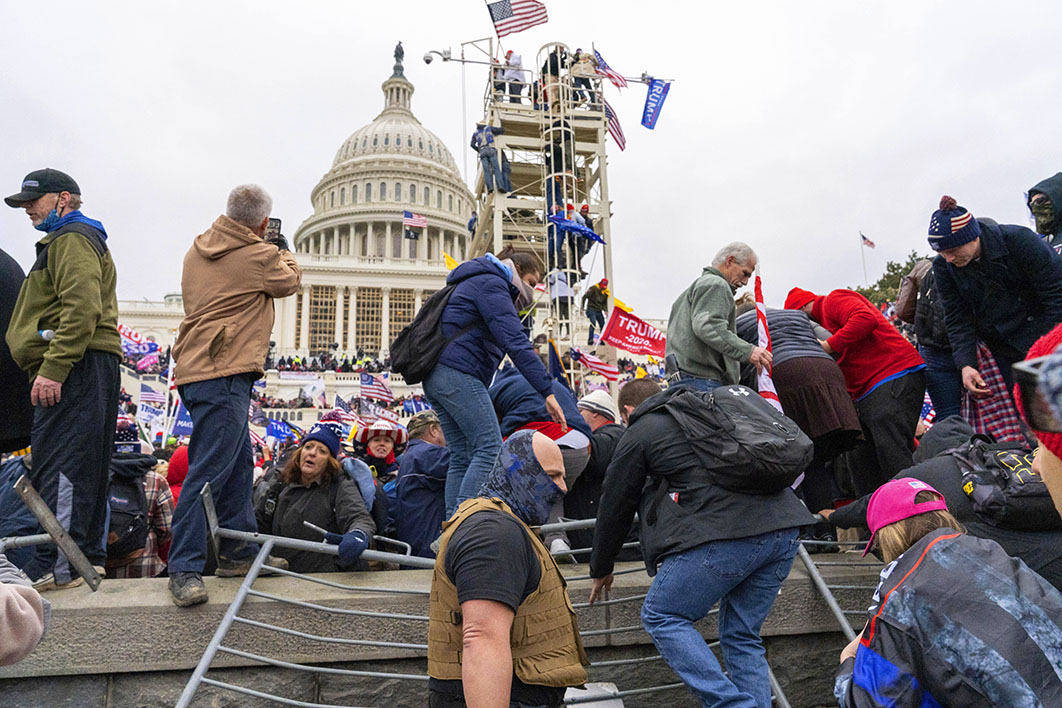 Inverse relationship: the insurrection at the Capitol. Mihoko Owada/Star Max/AAP

The night before Joe Biden’s inauguration on 21 January, MSNBC host Rachel Maddow was interviewed by her colleague Seth Myers. Both had been counting the hours to the end of the Trump White House and shared a sense of exuberance underpinned by anxiety. “Everybody I know in the news business has aged over the last four years,” said Maddow, “the ways presidents age.”

Over here, on ABC’s Planet America, hosts John Barron and Chas Licciardello introduced their inauguration special with no signs of accelerated ageing. The mood was almost jocular as Barron recounted the 6 January assault on the Capitol, though due emphasis was given to its most disturbing aspects. Licciardello followed up with some derisive comments on Republicans’ responses to the mayhem.

They were not omitting the worst of what had transpired in the previous two weeks so much as failing to communicate the gravity of the situation. “Pretty serious stuff there,” Barron remarked airily, following a clip of the clerk from the House of Representatives reading the second impeachment finding against Donald J. Trump on the charge of “incitement to insurrection.” Licciardello quoted from a trenchant statement by Republican senator Liz Cheney, then quipped that, regardless of what happens at Trump’s Senate trial, “someone is going to get punished. And that’s Liz Cheney.”

Like many of the leading television commentators in America, Licciardello has a background in comedy. But distanced from the emotional force of the crisis, he seemed to lack the instinct to recognise that this is not a time for quips. In a powerful monologue delivered on the evening of 6 January, Seth Myers began by stating baldly that jokes were off the menu. After a day “filled with horrifying scenes of surreal and armed insurrection… images that should be seared into our collective consciousness for the rest of our lives,” he said, it was important to be “as plain-spoken and as clear-eyed as possible.”

Something critically important is at issue here. For those in the midst of it, the crisis in American democracy amounts to a moral emergency. With the confusions of judgement that lead to mob violence compounded by the moral contortions of Trump’s congressional supporters, disseminated at length on Fox News and other right-wing channels, the entire nation risks losing its moorings in the bedrock of sanity. And when sanity is on the line, plain speaking is vital. Parody and satire are redundant; irony doesn’t work. Humour, that most ancient and lethal of political weapons, must be laid aside.

Myers chose his words as if they were stepping stones across quicksand. Democracy, he said, requires “vigilant stewardship,” and at this harrowing moment its survival depends upon the “sedition caucus” in the Republican Party being shamed and disgraced. “No one who aided and abetted today’s actions should be allowed to serve in a democracy they so clearly detest.”

In the aftermath, it is all about consequences, and where Myers articulated the need for prosecution as both urgent and imperative, Planet America focused on the ifs and buts. Former Trump security advisor John Bolton, a guest on the program, gave the view that Trump’s incitements had had an “unfortunate effect” on his supporters and that overall his conduct had done “considerable harm.” The leadership of the Republican Party “did not do an adequate job” in refuting the election fraud claims. Although the former president’s actions were “unacceptable,” Bolton did not see a Senate trial as either constitutionally viable or good for the country. Better, he said, to ignore Trump, which for Trump himself would be the worst punishment.

Although the tone of the interview was reasonable, I watched it with growing unease. A moral emergency is a real phenomenon, and raises some counterintuitive challenges, one of which is the need to recognise that there is such a thing as dangerous understatement. Moral compromise can compound a situation in which the political bastions of the nation have been compromised. Hence Myers’s insistence on the severest legal consequences.

On 29 January, when some semblance of order had been established by the first week of the Biden presidency, the matter of consequences was front and centre on American news channels. Rachel Maddow commenced her program by reading parts of a letter from 270 congressional staffers. Their collective voice came through loud and clear.

“Our workplace was attacked by a violent mob… who charged into the building with body armor and weapons,” they wrote. For hours they were in fear for their lives, hiding under desks or barricaded in offices. Among those killed was a police officer, “one of our co-workers who guards and greets us every day,” who was beaten to death. Some of those who incited the violence were people they still passed every day in the hallway. Urging all senators to convict the former president, the letter set out an equation: the gravity of the consequences for the nation are in inverse relationship to the gravity of the consequences faced by Trump and his enablers.

Someone who knows there is no escape from this equation is Ukrainian president Volodymyr Selensky, interviewed for Axios by Australian journalist Jonathan Swan. A few hours before Maddow went to air with the letter from congressional staff, Swan spoke to Nicolle Wallace, host of MSNBC’s White House, about Selensky’s reaction to the evolving situation in America. “It’s a reminder that what happened echoes well beyond American shores,” said Swan. “This is not theoretical. Ukraine is on the edge, defending a struggling democracy against Putin, and he [Selensky] is seeing this horrific sight. It’s a really troubling conversation that we had, a really strong reminder that the world is watching here.”

As part of the watching world, Australia has a significant role to play in the formation of perspectives. Is this just another political drama from wacky old Planet America? Or is it a defining crisis in an increasingly stressed world order? “What lessons will America learn from this deep rupture to its soul?” asked presenter Sarah Ferguson on Monday night’s Four Corners.

The program provided a narrative reconstruction of events on 6 January, drawing on footage from a wide range of sources to assemble a chronological account of the insurrection. Close-up views of what happened during the assault on the Capitol were shot on phones in the midst of a crowd whose chaotic surges caused strange angles and jolts. While much of the material was available from prior compilations, the editors have created what may be the clearest and most graphic overview to date.

Interviews with those caught up in the maelstrom were concerned with the immediate experience rather than analytical background. The distress on the faces of witnesses was in stark contrast to the overweening confidence of those addressing the rally beforehand and those who led the crowd through the grand entrance hall, shouting in triumph.

An absence of challenging questions has led to some criticism from viewers, especially in the case of Proud Boys spokesman Enrique Tarrio. Tarrio is an ambiguous figure, an FBI informer according to some reports, and his absence on 6 January because of an arrest two days earlier looks like convenient timing.

Among those unhappy with his inclusion in the program was Tim Soutphommasane, who tweeted, “You wouldn’t give al Qaeda a platform, so why would you give one to white supremacists and fascists?” It’s an important caution, but this wasn’t exactly a platform, and Tarrio was fairly evasive, though he made one disturbing statement. “There’s a saying that a federal prosecutor can prosecute a ham sandwich. Right? If they wanted to. But I think they’re going to have a very, very hard time with me. I got full faith in it.”

It’s a faith evidently shared by Trump himself, and a few notorious Republican members of Congress. If it proves well founded, American democracy is terminally fractured. •