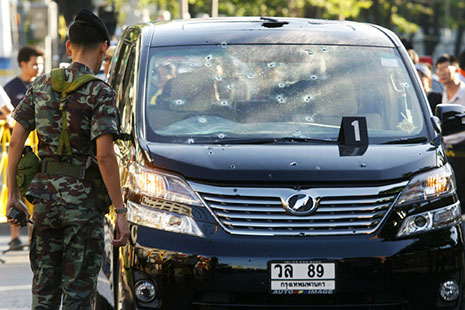 LAST MONTH we introduced Thailand’s royal sub-plot here at Inside Story. We suggested that the monarchy has been increasingly caught up in the political turmoil that has convulsed Thailand over the past three years. With some unexpected new action, the royal sub-plot has now thickened.

Early on the morning of 17 April 2009 Thai media tycoon and Yellow Shirt protest leader Sondhi Limthongkul was commuting through the streets of Bangkok. The details of what happened next remain sketchy. A hail of gunfire left his van riddled with holes. Whether this was a comically incompetent assassination bid or a murkier effort to germinate a crisis, Sondhi escaped relatively unscathed but with some unwelcome shrapnel lodged in his skull.

Sondhi has spent recent weeks recuperating and has only just broken his silence on what happened. Ever since he was rushed to hospital there has been intense speculation about who ordered this “hit.”

The immediate targets of scrutiny were the deposed former prime minister Thaksin Shinawatra and his Red Shirt lieutenants. In the colour-coded street protests that have defined Thailand’s recent history, Thaksin has been pitted against Sondhi’s Yellow Shirts. The two were once business associates but a falling out has left much bad blood between them. It was protests led by Sondhi that culminated in the September 2006 coup against Thaksin.

After the post-coup elections of December 2007, when Thaksin-aligned politicians were once again endorsed by the Thai electorate, Sondhi took his supporters back to the streets of Bangkok. His provocative attacks on the government throughout 2008 culminated in the siege of Bangkok’s airport and the toppling of prime minister Somchai Wongsawat, Thaksin’s brother-in-law. Sondhi has marshalled his significant financial, media and political influence in a rolling campaign to oppose Thaksin and his Red Shirts.

So, Thaksin certainly has a motive. But the credibility of the theory that he was behind the assassination bid was short-lived and within days other, far more provocative, hypothesises emerged.

Sondhi himself has denied that Thaksin was involved and has pointed the finger at “influential soldiers.” In his first press conference since the assassination attempt, Sondhi identified a post-Thaksin political vacuum that “somebody” hopes to fill. In this new stage of political strife, existing alliances are apparently being called into question. “If I was killed, then this means [prime minister] Abhisit [Vejjajiva] can also be the next target. In this country men with guns can do anything without thinking how Thailand will survive.”

Nobody assumes that these “men with guns” work independently. There is an insinuation that they have high-level backing. Sondhi has made his position clear: “I suspect a powerful figure might be involved as an accomplice.”

There is much speculative and hushed whispering about exactly who that could be. Incredibly, the palace itself has been caught up in the rumour mill. Last week it was widely reported in the Thai and English language media that a close confidante of Thailand’s Queen Sirikit, Viraya Javakul, had denied involvement in the attack on Sondhi. One newspaper described her as a “lady-in-waiting.” The publicity given to her denial will only serve to generate further gossip, especially now that she has suggested that another unnamed courtier may be the actual target of the whispering campaign. The palace has tried to extricate itself from the damaging publicity by insisting that Viraya has no position in the royal household.

Since the coup that toppled Thaksin’s government, other palace insiders have been caught up in Thailand’s increasingly fractious political strife. In the past month Generals Prem Tinsulanonda and Surayud Chulanont, both powerbrokers on the King’s Privy Council, have been drawn into the public political fray. For a long time they have been aligned, in more than rumour, with Sondhi’s Yellow Shirt movement. Queen Sirikit has also been a prominent supporter of the Yellows, but it is now unclear whether they retain her favour.

The past successes of Sondhi Limthongkul and his Yellow Shirts have been widely attributed to the high-level backing provided to his political movement. The strength of that backing now has to be rethought in the light of Sondhi’s close shave. If diehard Yellow Shirts like Sondhi have found themselves vulnerable, and can no longer rely on their old friends, then the more dangerous plotting has probably only just begun. •

Nicholas Farrelly and Andrew Walker are Southeast Asia specialists in the College of Asia and the Pacific at the Australian National University. In 2006 they co-founded New Mandala, a website on mainland Southeast Asian affairs.