The asylum-seeker plan that keeps disappearing over the horizon

The collateral damage is too great for policy-by-slogan to be sustainable, writes Peter Browne. The alternative can bring benefits for asylum seekers and for Australia 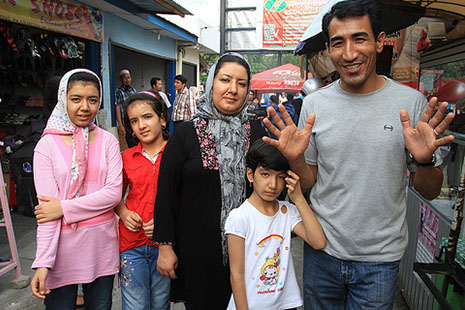 IN AN ARTICLE last month for the Guardian, Robert Manne argued that the drop-off in boat arrivals is an opportunity for supporters and opponents of asylum seekers to strike a compromise. Supporters (“the left”) will need to acknowledge that offshore processing and towbacks have stopped the boats and dramatically reduced the number of deaths at sea. Opponents of asylum seekers (“the right”) must acknowledge that the same policy continues to inflict enormous psychological damage on tens of thousands of people who have been, or are likely to be, recognised as refugees. The compromise is straightforward: the left should accept that naval interception and offshore processing work to stop the boats and should continue; the right must agree to end the misery inflicted on the 30,000 or so people currently caught up in the system in Australia, Papua New Guinea and Nauru.

Reducing the risk of large numbers of asylum seekers dying at sea and accelerating the processing of previous arrivals – it’s an attractive prospect. But a compromise of this kind will fail because it treats the problem too narrowly. Left out of the equation is the collateral damage caused by Australia’s asylum policy – the deterioration in our relationships with neighbouring countries (particularly the largest, Indonesia), the impact of the processing centres on the development of Nauru, Manus Island and PNG (with Cambodia to follow), and the consequences for tens of thousands of asylum seekers whose other options for gaining protection are bleak.

Australia’s deterrence system is also hugely costly in dollar terms. In September last year the Parliamentary Library estimated that Australia’s spending on irregular maritime arrivals and counter-people smuggling activity for 2013–14 was almost $3 billion, over half the amount the UN High Commissioner for Refugees, or UNHCR, spends each year running its operations worldwide. Even if detainee numbers decline, the cost of continuing naval interception, running the camps and buying the ongoing cooperation of PNG and Nauru will be a permanent drain.

What the current situation does offer is the chance to consider other ways of helping asylum seekers without endangering lives. Asylum seekers shouldn’t have to risk the journey by boat to Australia in order to gain protection, yet simply closing off that option will place them in just as much danger as they try to reach other safe countries. With Indonesian parliamentary and presidential elections this year, this is also a rare opportunity to recalibrate relations between the two countries.

It isn’t only refugee advocates who recognise the importance of vastly improved regional cooperation. The Expert Panel on Asylum Seekers, chaired by the former head of the Australian defence force, Angus Houston, reported that “measures to sustain a more practical, better-managed and more coordinated regional framework of cooperation” were “fundamentally important” and “a central focus” of its work.

According to the panel, these measures should include “high-level and broad-ranging bilateral cooperation with Indonesia and Malaysia in particular,” a significant expansion and refocusing of Australia’s humanitarian program, and a reduction in the backlog of family reunion applicants under the Special Humanitarian Program, “which risks becoming a significant factor motivating those who choose irregular migration by boat to Australia.”

At the core of the panel’s report – both as a practical measure and as a sign of goodwill to neighbouring countries – was the recommendation for an immediate rise in resettlement places to 20,000 per year, with a further increase to 27,000 within five years. (Labor increased the number to 20,000; the Coalition cut it back to 13,750 as soon as it took office.) An increase to 20,000 places would simply restore Australia’s resettlement program to its numbers in 1980–81, a time when the Australian population, and its capacity to absorb refugees, was much smaller. Taking account of population growth, those 20,000 places would translate to over 30,000 in 2013–14.

Australia’s overall immigration program has changed almost beyond recognition over the past two decades, with skills now almost the sole criterion for admission, so 30,000 doesn’t seem too high a figure for a group of new arrivals who will need extra settlement assistance. An increase of that order would also be a dramatic signal to neighbouring countries that Australia is serious about sharing the load.

Resettlement is just part of the package, though its symbolic contribution would be immense. Aid funds would be used to open up opportunities for asylum seekers to live and work locally within Thailand, Malaysia and Indonesia. This would take years rather than months, but the ultimate aim would be that those countries become signatories to the Refugee Convention (a process that has begun, but appears to have stalled, in Indonesia) and offer full protection mechanisms themselves. In the meantime, the UNHCR will need additional funds to speed up processing of asylum claims, particularly in Indonesia, which has often been excruciatingly slow because the agency’s resources are spread so thinly.

“Indonesia has been waiting a long time for a serious proposal that would put it front-and-centre of a regional solution,” says Tim Lindsey, the director of the Asian Law Centre at Melbourne University. In an interview with Paul Toohey reported in the latest Quarterly Essay, That Sinking Feeling, he describes how the Indonesians see asylum seekers as essentially Australia’s problem, not least because a significant number of them have left two countries – Afghanistan and Iraq – where Australia (but not Indonesia) was part of the invading force that triggered the departures.

Australia needs to engage with Indonesia as equals in the task of creating fairer processes for asylum seekers in the region. We should work to ensure that all countries in the region remove the barriers that prevent asylum seekers getting access to national or UNHCR refugee determination processes, and that asylum seekers are not subject to harassment while they await an outcome. The ultimate goal should be common, orderly processes across the region. These and other measures have been discussed in more detail in the Refugee Council of Australia’s submission to the expert panel in 2012.

The other target for Australian action should be the countries from where asylum seekers are fleeing – or at least those where our efforts are likely to bring about gains in security for minority groups. The obvious starting point is Myanmar, a country Australia can seek to influence through its own diplomacy and with the help of neighbouring countries. Of the 13,000 Rohingya people who fled Myanmar by boat in 2012, for example, almost 500 died at sea, according to the UNHCR. A sustained effort to reduce the persecution that drives out the Rohingya would help demonstrate the sincerity of Australia’s declarations about the need to reduce deaths at sea.

The largest numbers of boat arrivals in recent years have come from five countries, Sri Lanka, Iran, Afghanistan, Pakistan and Iraq. Although Sri Lanka is the closest of these countries, both Labor and the Coalition have compromised Australia’s capacity to influence the behaviour of its government and military. But the fact that Australia has been so out of step with most Western nations in its attitude to Sri Lanka’s human rights record can also be an opportunity: Mahinda Rajapaksa’s government might well be prepared to modify its behaviour if its one uncritical Western friend looked like jumping ship. What’s certain is that turning a blind eye to the behaviour of the government and the military has done nothing to bring about a change in the conditions that prompt people to flee.

Iran, Afghanistan, Pakistan and Iraq pose even more difficult challenges, and it’s likely that people from each of the four will continue to seek asylum in the West. (In Australia’s case, immigration department figures for 2012–13 show that when they were able to lodge onshore asylum claims the four nationalities had, respectively, 85 per cent, 96 per cent, 95 per cent and 84 per cent chance of being accepted.)

Some of these people, rather than heading towards Europe, will get as far as Malaysia or Indonesia, and it’s there that Australia needs to do whatever it can to ensure that they have access to an orderly and expeditious refugee determination process. The more fortunate will continue to be among the asylum seekers who arrive by plane – 8308 in 2012–13 – without facing the prospect of offshore detention.

The results of this strategy – more resettlement places in Australia, better processing and living conditions in the region, pressure on source countries – won’t be immediate. But over time, as the report of the expert panel put it, “a genuinely regional framework will reduce the lure of irregular maritime migration options.”

Are either of the main parties likely to adopt such a plan? In some ways, the Coalition is best placed to act. It has shown its supporters that it can do what it promised – stop the boats – and could plausibly argue that we now need a longer-term plan to take Australia off emergency footing and reduce the vast expenditures on detention and offshore processing. It’s difficult to see this happening under the present leader, but not entirely out of the question if immigration minister Scott Morrison moved to another portfolio.

Labor is still living under the shadow of the 2001 election, which the party believes it lost because John Howard’s harsh treatment of asylum seekers on the Tampa translated into votes for the Coalition. There’s very little evidence to support that view, but it continues to influence Labor’s thinking. And when Kevin Rudd’s fall in popularity in 2010 coincided with a rise in the number of boat arrivals (but also with his mishandling of climate change and the pink batts controversy), that view was reinforced. All the evidence shows that health, education and economic management continud to be the issues that overwhelmingly determine how Australians vote.

The expert panel, appointed by Labor, argued that a genuine regional agreement was the only long-term option for reducing deaths at sea while preserving the right to seek asylum. Julia Gillard and Kevin Rudd favoured the harshest of the panel’s recommendations, but now the party should focus on the panel’s vision of a region that shares the task of protecting asylum seekers fairly. As unease about Labor’s role in creating the current harsh regime intensifies, the party needs to develop a just, defensible and effective alternative. •

Peter Browne is editor of Inside Story and author of The Longest Journey: Resettling Refugees from Africa (UNSW Press).