The chant of East West Link

Why are Victoria’s Liberals stuck on a controversial project twice rejected at the ballot box? 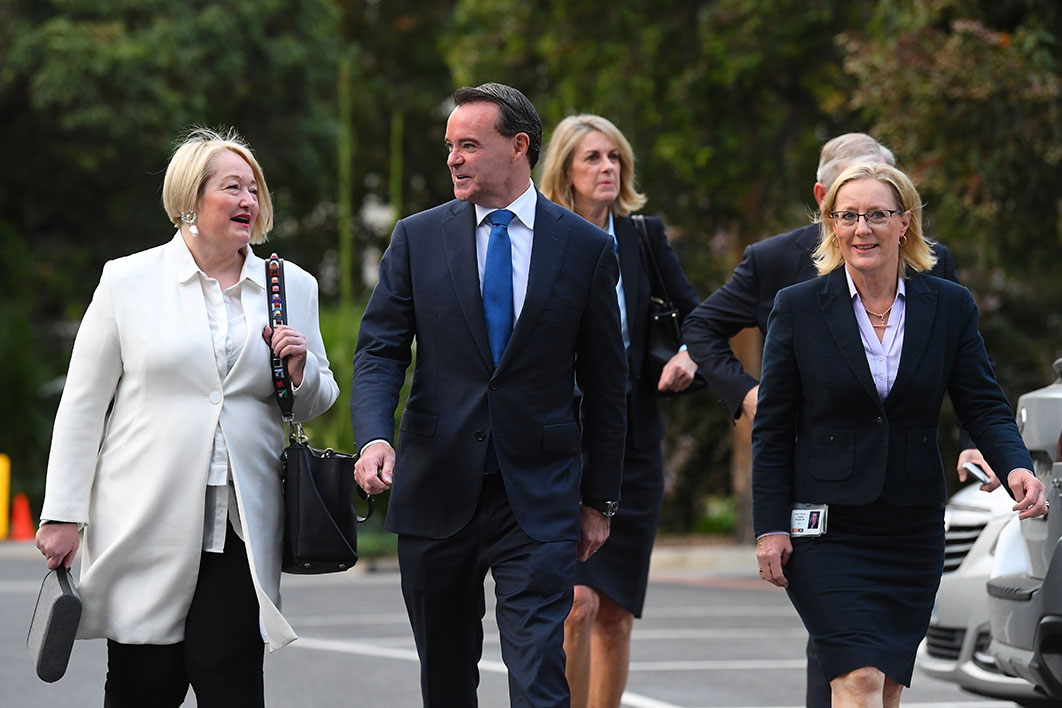 Victorian opposition leader Michael O’Brien (second from left) arrives at Parliament House in March this year to face would proved to be an unsuccessful leadership challenge. James Ross/AAP Image

O’Brien is intimately connected to the project, of course — it was his decision as treasurer to fund the immediate commencement of the project in 2013, despite a pending court challenge and Labor’s commitment to dump it, and his decision to issue a special letter to the contractors promising as much as half a billion dollars in compensation if the courts found the project to be invalid.

But personal vindication is not the only attraction for the Liberals. Shadow roads minister Tim Smith points to the $4 billion in federal dollars still on the table for the project that amounts, he says, to a “free road” for the state, something an O’Brien government could begin building “immediately” if elected. Indeed, he wrote in Melbourne’s Herald Sun, the Andrews government’s obstinance over the freeway “borders on pathological.”

Smith’s claims provoked the predictable responses from the Andrews government, which laughed off the project as a waste of money, and from public transport activists, who asked why, having pledged to build the project in 2014 and 2018 and lost both elections, the Liberals might see some political capital this time around. If anyone had a pathological obsession with East West Link, they implied, it must be Victoria’s Liberals.

Both criticisms are worth examining. Even if we accept the opposition’s optimistic appraisals of the project’s economic worth — and we probably shouldn’t — it’s clear that construction would not be the breeze it imagines. Since coming to power in 2014, the Andrews government has sold back many of the homes compulsorily acquired in the first run at East West Link, removed all the planning overlays and approvals that had been granted, and amended heritage protection for large inner-city parks. Building the road would require totally new approvals and acquisitions. That kind of process usually takes at least a year and a half — hardly an immediate start.

Then, in late 2019, the Andrews government nominated a section of Melbourne’s Eastern Freeway for heritage status. The opposition saw this as East West monkey-wrenching, and with some justification: the section nominated is the bit that would require major surgery to connect to an East West tunnel.

None of this makes the building of (some kind of) East West Link impossible, but the booby traps and uncertainties would undoubtedly drive up the time and cost involved. The contracting market is likely to cost in these problems, as well as the broader political risk of the project’s being overturned again.

Even if the market has not tarred the whole state with a “sovereign risk” label — as O’Brien claimed it would back when he was state treasurer warning voters off Labor and its plans to cancel the project— East-West Link would undoubtedly have one attached to it. Recall that even the first time around, in 2014, O’Brien needed to offer the private sector half a billion free dollars just to get the contractors to sign on — and that was before any governments had invalidated any contracts. A second attempt could come with truly eye-watering costs — blowing out even the most optimistic cost–benefit equations.

With that said, I’m not so sure actually building this project matters deeply to the Victorian Liberals. Having seen the debate on East West Link evolve over many years, I’m not convinced the opposition is promising to build East West simply because it believes passionately in its merits, or that the Liberals are so persuaded of its overwhelming utility that they cannot bring themselves to talk about any other projects.

East West Link is not a normal election boondoggle — it is infused with political venom, with outrage and resentment and suspicion of political enemies. It has become a kind of political totem, a symbol caught up in the culture war. A promise to build East West Link isn’t so much a serious public policy proposal but rather a pledge to hoist clan colours over the rivals’ battlements. It is a rallying call — and I’d suggest it is one pitched primarily at a Liberal Party audience.

Lord knows, the state opposition could use a little rallying. Victoria’s Liberals have been enduring a long and gruelling bout of civil strife — something I have written about on these pages before. It is the kind of thing exacerbated by lousy electoral prospects. Polling is infrequent at the state level, but Ipsos put Daniel Andrews’s approval rating at a net positive nineteen points in October last year, when Melbourne’s intense stage four lockdown was in force. The same poll had Michael O’Brien at minus twenty-four approval, and put Andrews thirty-five points ahead as preferred premier.

A month later, perhaps owing to elation at the restrictions ending, Roy Morgan had Victorian Labor with 58.5 per cent of the state’s two-party-preferred vote — better even than the 2018 “Danslide” election, and an indication that things could get worse yet for the state’s Liberals.

A mortifying example of such a fate was soon offered up by Western Australia: there, the state’s Liberal opposition was all but obliterated by Mark McGowan’s Labor government — leaving it with just two seats and the loss of official opposition status. It is little wonder that, two days after the WA election, a leadership spill was attempted in the Victorian Liberal Party — though one that didn’t quite come off.

Hence the chant of East! West! Link! It helps the state’s Liberals focus on Labor instead of themselves. While many Victorians will hear the pledge and ask if we are not, perhaps, past this issue, the intended audience will see the chant as synonymous with “wanton Labor waste” and the notion that Daniel Andrews is somehow captive to the inner-city “cultural left.” East West Link is a rallying cry, a morale booster; it is a skin to pull tight across a war drum — worn, but still making music for the troops who need to hear it.

Of course, this doesn’t mean the Liberals wouldn’t try to build the thing if they somehow plucked the rabbit out of the hat and returned to government sometime soon. Plenty of massive, expensive, disruptive, ineffective, even idiotic infrastructure projects get built mainly for their symbolic value. Many projects are built not as a means to an end — getting people in and out of the city efficiently; power to homes; clean water to taps; homes connected to fast internet — but rather as political shrines, built for the statements they make, the values they embody, the memories they honour or the causes they glorify.

But I wonder if a freshly elected O’Brien government would be willing to expend so much financial and political capital on such a project, simply to shove it up inner-city lefties, build a shrine to its abhorrence of Daniel Andrews’s alleged recklessness, and rehabilitate the one-term Baillieu–Napthine government that commissioned the thing in the first place. I would not be totally surprised if, notwithstanding the beating of the East West drum, that government discovers other pressing priorities. That, or it will be built as a tomb in which to bury a one-term O’Brien government. •