The choice: Johnson in, Corbyn out, Brexit done

Britain has voted for clarity, but the aftermath will be muddy 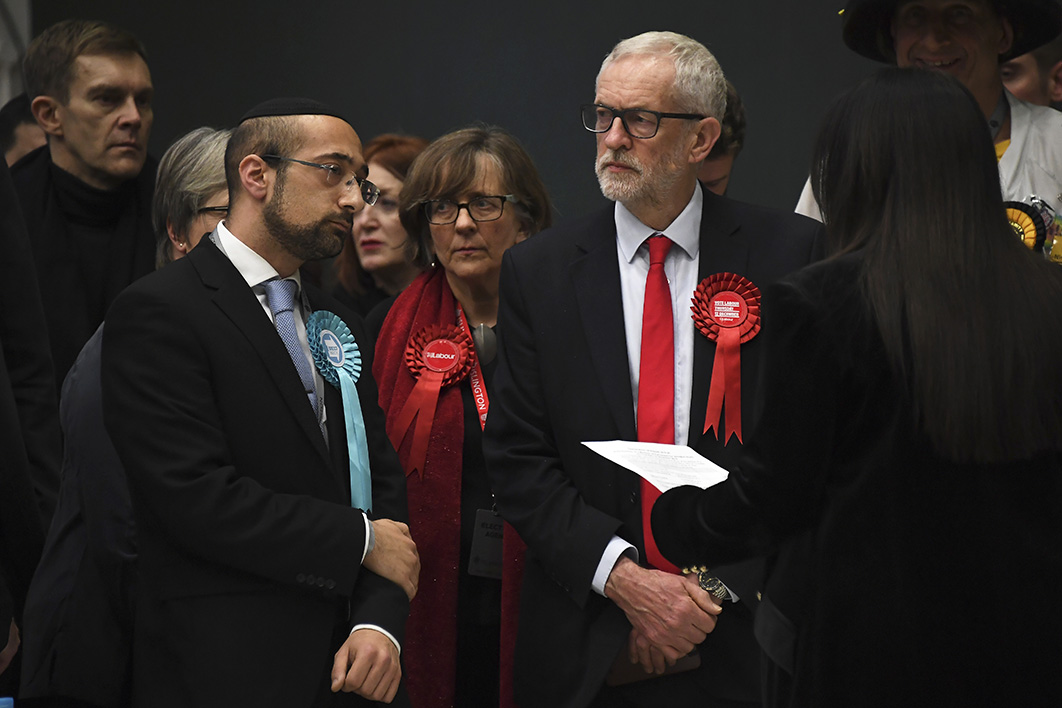 Labour leader Jeremy Corbyn waits with other candidates for the declaration of his seat early on Friday morning. Alberto Pezzali/AP Photo

On election day in a northern English city, the young female shop worker who handed over my subscriber’s Guardian, after a glance at the smiling photo of Jeremy Corbyn on the front page, said with emphatic curtness: “I would never vote Labour. Not a cat in hell’s chance.” After a couple of years of exchanging only everyday pleasantries, I was too startled to offer more than a non-committal mumble in reply.

The unprompted remark, not least its tone, was hard to shake off. Was it just a twist on everyday familiarity, sharing recognition of a big event, or was it an augur? Wild hours of driving rain piled more doubt. Would such weather be a greater deterrent to working-class voters: and now, after the great post-Brexit political switcheroo, was this worse news for the Tories than Labour? What does everything mean, and where is Erving Goffman when you need him?

Parsing life’s daily moments for political signals is a fool’s errand if taken too far. Equally, it’s forgivable on the day votes are being cast, when the rivalrous media cacophony stills and, as in 2017, tightening polls make the result hard to call. The mind, veering between relief at the campaign’s end and longing for the 10 pm exit poll, can’t help seeking cues in every grain.

This time, as in 2015 and 2017, the ritual moment brought a shock: neither a narrow Conservative win nor hung parliament, as most projections had suggested, but a substantial victory for Boris Johnson’s party. The Tories would have 368 seats in the 650-member House of Commons, an increase of fifty, the exit poll said; Labour 191 seats, a loss of seventy-one; the Liberal Democrats thirteen, up by one; and the Scottish National Party fifty-five, boosting their number by twenty. (The figures were revised through the night: with under thirty to be declared at the time of writing, the Tory estimate is 364, Labour 203, SNP 48, and LibDems ten). The Tory vote share is around 44 per cent, 1.1 per cent up from 2017, while Labour’s fell to 32 per cent, 8 per cent down on its great surge that year.

An instant verdict, even assuming less than pinpoint accuracy in the figures, was that Johnson can now take the United Kingdom out of the European Union by 31 January and have a working majority in parliament for a five-year term. The first outcome will cap an astonishing six months, the prime minister having won a Tory leadership race, governed without a majority, faced serial Commons defeats, party defections, legal rulings, revised the Brexit deal with the European Union, been twice denied then ceded the general election he wanted — and after a tough campaign, winning by the clearest margin of any PM since Tony Blair in 2001 and, on the Conservative side, Margaret Thatcher in 1987.

Scotland’s result casts an instant shadow on his achievement, however. The SNP has nearly matched its 2015 hurricane, when it took all but three of the country’s fifty-nine seats and became the third-largest cohort at Westminster. That came a year after the 2014 independence referendum, and Nicola Sturgeon’s party will now be invigorated in their effort to force a repeat. Johnson’s consent is required for such a vote, which would again imperil the UK’s integrity, but a refusal could trigger a Catalan-style showdown. The challenge is unavoidable. And other major policy tests, from the economy and security to health and infrastructure, ae equally pressing.

The early results trickled in as usual from England’s northeast cities, where constituencies are small and counting quick (a reminder that a long-frozen redrawing of boundaries, taking account of population drift, might now actually happen, to Tory benefit). They showed Labour holding its bastions despite a sharply falling vote and smaller Conservative upswings. Then came fractures in the northern “red wall”: Leigh, part of Manchester, Labour since 1922; Wrexham in north Wales, Labour since 1935; Grimsby, fishing port and Brexit icon, Labour since 1945; now fabled Workington, whose only non-Labour MP had served for two years after a mid 1970s by-election.

On it went, but with another huge test on the horizon: can a Tory party that has won Workington now govern as Workington’s party? Johnson’s victory speech to his supporters evinced recognition: “We have to grapple with the consequences of [victory], we have to change our own party, we have to rise to the level of events, we must answer the challenge that the British people have given us.”

For the Liberal Democrats, a likely one-seat advance is dismal when set against the party’s inflated ambition to hold the balance of power. Consoling wins, such as taking the North-East Fife super marginal, were set against the London losses of Luciana Berger and Chuka Umunna, high-profile ex-Labourites, though neophyte leader Jo Swinson’s loss of her own seat in Dunbartonshire East may allow the LibDems’ post-election argument to be less personalised and more strategic.

But everything comes back to Labour and, even more, Corbyn. In this topsy-turvy world, Labour had its own moments in the south: defending Canterbury and Norwich South, toppling Tories and expanding majorities in Putney and Battersea as its London heartland grows. But the big picture is grim. This is the party’s fourth successive defeat, one to compare with Michael Foot’s in 1983 (though his 209 seats exceeds Corbyn’s, whose total is Labour’s lowest since 1935). The party’s culling across England’s north and midlands, both in marginals and its old fastnesses, echoes its collapse in Scotland (where it lost six of its seven seats, already a historic low).

For Charlie Falconer, a Blairite minister who made his peace with Corbyn, the attitude of Labour’s old supporters in these regions was: “You are offering us nothing and don’t connect with us anymore.” He posed the question, “What do we do to start having a conversation with them again?”

Corbyn’s own response, at his Islington North count, had none of this. Graceless, media bashing, lacking any shred of contrition or humility, it was just another stump speech. Here on display was his, and Labour’s, true measure. The tragedy is how few in this degraded party can see it, even now, and indeed how many — including swathes of so-called centrists, trading silence on anti-Semitism and extremist links for the chance of stopping Brexit — are implicated.

In this sense Corbyn’s address, with its lack of imagination or insight even at his moment of political truth, is symptomatic. He has Corbynised Labour, in its soul as well as its power structures, and that contaminates the entire political world. Other toxins are at work, but Corbynism is the worst: and part of that worst, as the speech confirmed, is that it is so certain of its own moral superiority and so trapped inside itself.

Britain has long needed a government, and now has one. It also needs a decent opposition. But above all, what gives hope is that on the big issues at stake, the people got it right. This was another good day for democracy. Now I’m off for a word with my new friend. •