The cliffhanger Senate count: an update 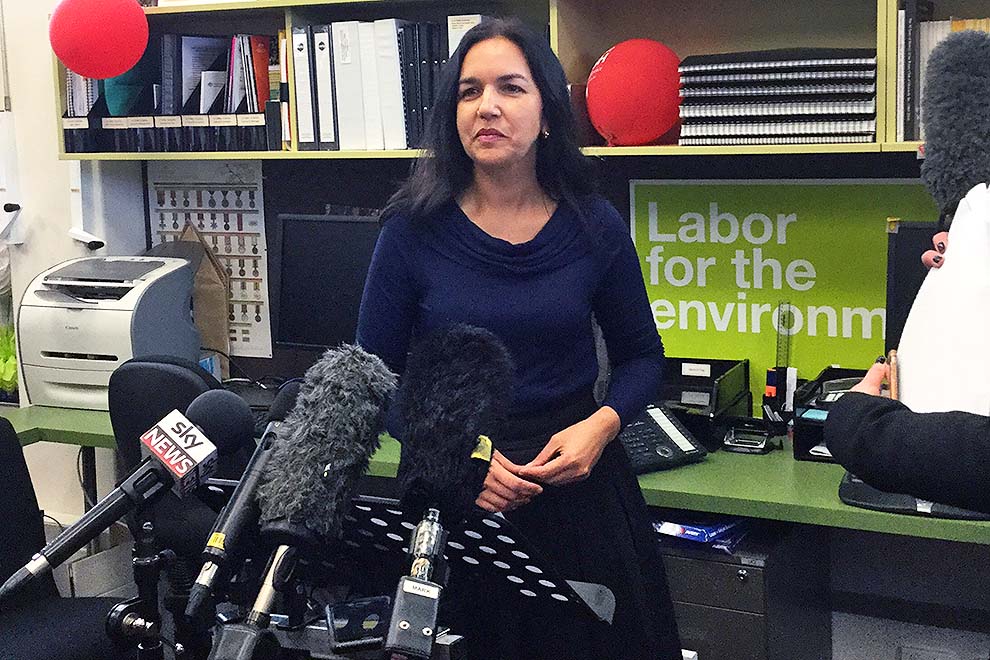 A matter of preference: Labor senator Lisa Singh speaks to the media in Hobart yesterday after it became clear she had won a Senate place from an “unwinnable” position on the ballot paper. Andrew Drummond/AAP Image

The Australian Electoral Commission’s computer sorted out the Tasmanian Senate result on Wednesday. And in doing so, it’s made it a lot clearer who will be in the new Senate – even if there’s now an outside chance that Pauline Hanson’s One Nation might end up with even more senators than we thought.

The preference flows in Tasmania, coupled with trends in recent counting, make it clear that One Nation will have at least three senators – Hanson herself in Queensland, Brian Burston in New South Wales, and Rod Culleton in Western Australia – with a rough outside chance in three other contests.

They will be among at least ten crossbenchers, maybe more, compared with the eight who caused Tony Abbott and Joe Hockey such grief in the old Senate. The double dissolution has cost the Coalition two or three seats in the seventy-six-member chamber. On the most likely outcomes in the five states where counting continues, the government will need the support of at least eight crossbenchers to pass any legislation opposed by Labor and the Greens, and possibly nine.

Tasmania was the first state to complete its Senate count. All the 339,159 votes were digitised and fed into the commission’s computer, which spun them around, distributed their preferences, eliminated a candidate every second or so, and came up with the outcome.

The headline result has been well broadcast. Labor senator Lisa Singh, dumped to the unwinnable sixth position on her party ticket for being too left-wing, asked people to vote for her below the line, won close to a quota, and galloped home. Liberal senator Richard Colbeck, dumped to the dangerous fifth position on his party ticket for not being sufficiently right-wing, won more than half a quota, but that was not enough to protect him when preferences went elsewhere to give Greens senator Nick McKim the final seat.

But other things in the count have attracted less attention. In the end, it was not Colbeck whom McKim had to beat for the final seat – it was One Nation candidate Kate McCulloch. And he beat her by only 141 votes out of 339,159. Had just seventy-one votes changed sides – 0.02 per cent, or one in five thousand – One Nation would have won a seat that even Hanson wrote off when she claimed up to four seats on polling night.

And McCulloch almost got there in the way the new voting system was meant to preclude: on preferences.

One Nation won just over 2.5 per cent of the vote, far short of the 7.7 per cent required for a quota. In the past, that would have been curtains. Even the other micro-parties had snubbed One Nation in preference deals, which would normally have left it irrelevant.

But under the new system, voters decide their own preferences. And thousands of Tasmanians who voted first for other parties gave preferences to One Nation, pushing it up ahead of Colbeck and almost ahead of McKim. Many Senate results have been close, but that was one of the closest wins ever.

Tasmanians are good at Senate voting. They must vote below the line at state elections, so they’re used to it, and 28 per cent voted below the line federally. No other state is so individualistic, and no other state saw any significant rebellion against the party ticket. (Dennis Shanahan noted in the Australian that former army general and conservative hardliner Jim Molan won 8000 votes from seventh place on the Liberals’ NSW ticket. Dennis, that means one in every 200 NSW Liberal supporters voted for him – just one in 200! By contrast, one in eight Tasmanian Liberals voted for Colbeck, and even that was too few.)

The Tasmanian count showed two trends that will transpose to other states. First, preferences made little difference, by and large, to party tallies. Some parties did better than others – the Xenophon team did poorly, as did the Sex Party – but the party positions remained almost unchanged throughout the count, apart from the Shooters overtaking Xenophon.

Second, the parties that did best on preferences were One Nation, the Shooters and Labor. If One Nation and the Shooters do as well in other states, then seats that now look settled might become unsettled. We’ll come back to that.

With that proviso, and with two important exceptions, we now know more or less who will be in the new Senate. By and large, the parties in the lead for the still-unclaimed seats will probably win them. The table below shows what this will mean state by state.

That leaves ten or eleven seats in the hands of the small parties. One Nation is the biggest of them, with 4.3 per cent of the Senate vote, a supersize share of preferences, and at least three seats. The Xenophon team will have three. The Liberal Democrats will probably have two, with Brisbane IT consultant Gabe Buckley joining David Leyonhjelm in the Senate, although neither is yet certain to win.

Add in Derryn Hinch, Jacqui Lambie, and possibly Family First leader Bob Day – one of two candidates who might owe his seat to preferences – and it will be a difficult pack for the government to manage. You need only thirty-eight of the seventy-six senators to block a bill, and Labor and the Greens will have at least thirty-four, possibly as many as thirty-six. If they win either of the two seats still too close to call, then a Labor–Greens–Xenophon alliance would have the numbers to block any bill.

Two seats remain too close to call. In Western Australia, indefatigable Greens senator Rachel Siewert has .36 of the quota she needs for the last seat, while Aboriginal artist Kado Muir – a former Greens candidate who quit to join the Nationals because the Greens wouldn’t give him a winnable seat – has .33 of a quota. An anti-nuclear Aboriginal artist in long dreadlocks would be an interesting addition to the Nationals’ party room.

Preferences will decide that seat, and the last one in South Australia: the only mainland state where one of the major parties will have lots of preferences to distribute. And while party how-to-vote tickets made little difference in Tasmania, in South Australia a lot of Liberals will follow the card, which means their preferences could see Bob Day vault over the top of Labor senator Anne McEwen to claim the state’s final seat.

The other states look pretty clearcut. In effect:

• In New South Wales, the Coalition will lose a Senate place to One Nation, with all other senators being returned.

• In Victoria, the Coalition will claim one back, as crossbench senators Ricky Muir and John Madigan will be replaced by Derryn Hinch and the Liberals’ Jane Hume – another exotic species for the Coalition party room, as she worked until recently for Australian Super, the leading industry fund, whose success seems to embarrass Coalition leaders.

• In Queensland, the Coalition has lost a seat to Pauline Hanson, while Glenn Lazarus’s seat looks likely to go to the Liberal Democrats.

• In Western Australia, Labor has reclaimed a seat from the Palmer United Party, while One Nation will gain one from either the Coalition or the Greens.

• In South Australia, Xenophon will gain seats from the Coalition and the Greens, with Labor possibly gaining one from Family First.

• Tasmania saw no change in party terms. Former senator Colbeck, who was the only Tasmanian in the Turnbull ministry, was dumped in revenge by the state’s party boss, Eric Abetz. Abetz got his emotional satisfaction by putting a former staffer, Jonathon Duniam – who says he is “yet to be convinced that climate change is man-made” – in a safe spot on the Liberal ticket while dropping the minister to the unsafe fifth place. Astonishingly, the federal Liberal party let him do it.

These forecasts have one qualification. The Tasmanian results suggest that One Nation’s fears resonate with far more Australians than those who gave it their first preference – and that the “preference whispering” that has served the Shooters Party so well under the old rules has been muted, rather than abolished, under the new rules.

It’s unlikely to happen, but there is a rough outside chance that one of those two parties could get together enough preferences to edge their way into another Senate seat. When One Nation ended up so close in Tasmania, you can’t rule it out.

It adds up to being a difficult Senate, which will provide stony ground for future economic reforms, social reforms and tough budget decisions. Hanson and Xenophon lead the largest teams among the micro-parties, but there is little common ground between them, and neither has much in common with the third team, the Liberal Democrats.

Difficult as it may seem, this suggests that Turnbull’s best hope for effective government will be to explore every avenue possible to tackle the big issues such as budget repair and future climate change policy together with Labor. On the things that matter, they share an interest in replacing partisan wedging with a durable national consensus. •

THE SENATE: WHO’S IN, WHO’S LIKELY

* Day can expect the bulk of preferences from the 5th Liberal, who has 0.27 of a quota.

Just missed out
1 One Nation (Kate McCulloch) by 0.02 per cent
5th Liberal (Richard Colbeck) by 0.2 per cent