The early demise of social liberalism

The year 1909 saw a seachange in Australian politics, writes Norman Abjorensen on the anniversary of the fusion of the non-Labor parties 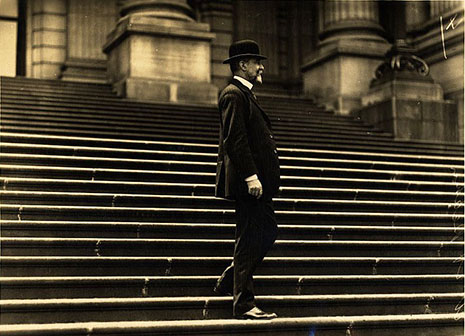 There was a time, hard as it might be to imagine, when the Australian Labor Party struck fear into the hearts of the establishment, and it is this very fear that has shaped the Australian political landscape to this day. This year marks the centenary of one of the truly seminal political events – and one of the least understood – when those sworn enemies, the Protectionists and the Free Traders, finally buried their blooded hatchets to unite in common cause against the feared and rising Labor Party.

To understand the magnitude of that event it is necessary to point out that in the politics of the time it was the equivalent of the Catholic Church and the various Protestant denominations laying aside their centuries of difference, as though they never existed, to unite against a common foe.

For much of the first decade of Australian federation, instability was the political norm; it was, as Alfred Deakin memorably described it, as though three cricket elevens had taken the field at the same time, with one of the three (Labor) “playing sometimes with one side, sometimes with the other, and sometimes for itself.” It was thus little wonder that in the first nine years of the Commonwealth, seven ministries rose and fell along with five prime ministers – Edmund Barton, Deakin, Chris Watson, George Reid and Andrew Fisher.

For much of this period, the Protectionists, Free Traders and Labor attracted roughly equal support, and it was not until 1909 that the Protectionist Deakin, in his third incarnation as prime minister, achieved majority government after having forged a reluctant alliance with Reid’s Free Traders. One of the conditions of the merger imposed by Deakin’s supporters was the departure of Reid, perhaps the most skilled (and certainly the most popular) politician of the day.

Thus the so-called Fusion, soon to be renamed the Liberal Party, came into being. Its genesis was clearly the rise and rise of Labor as a political force, almost entirely at the expense of Deakin’s Protectionists, whom Labor had supported in exchange for concessions. This was the basis for the so-called social liberalism of Deakin, and it marked something of a golden era in terms of social legislation, carried even further by the Fisher Labor government of 1910–13. Under Deakin’s second government, supported by Labor, the first protective federal tariff was passed, and the so-called New Protection sought to link the Commonwealth’s control of the tariff with the states’ power over wages and prices.

Deakin was more in sympathy with Labor than he was with the Free Traders, and he saw a natural alliance with the ALP, although he disdained the party discipline of Labor, especially the “pledge” that all Labor MPs signed committing them to support both the Labor platform and the decisions of caucus, whatever their personal inclinations. (Deakin conveniently overlooked the reason for the pledge: it was designed to stop people on his side of politics offering inducements to Labor members to vote a certain way, as had happened in the colonial parliaments of the 1890s.)

The 1906 election had seen the first anti-Labor scare campaign at the national level, with Reid campaigning as an “anti-socialist” rather than a free trader, and seeking to raise the alarm against the “socialist tiger.” Within Deakin’s own Protectionist ranks there was growing disquiet at the on-again, off-again alliance with Labor, especially among conservatives such as John Forrest and John Quick.

Often overlooked by historians is the fact that the political skids were already under Deakin and his Protectionists, the result of Labor’s growing strength and the end of the fiscal issue as a political hot spot. It was always a loose and fragile alliance, and hostility to the free trade doctrine, as espoused most vociferously in Sydney, was its only real common denominator. It had already started to fray towards the end of 1903 when the popular radical, Charles Kingston, left the government over its handling of an arbitration bill.

The great irony of Deakin’s making common cause with his erstwhile enemies was not lost on the man himself, and the marriage was no means a joyous occasion. In parliament Deakin’s erstwhile ally, William Lyne, angrily denounced Deakin as a “Judas,” prompting Labor’s Billy Hughes to complain that the comparison slandered the disciple. Lyne, along with three other Protectionists, declined to follow Deakin into the new party.

These events marked the beginning of the two-party system (or, with the Country Party/Nationals, a two-and-a-half party system) that has endured for a century. While protectionism, a Deakin legacy, endured until the 1980s, the Fusion was the end of Deakin’s early “third way” experiment of social liberalism. Whatever social ideals Deakin and his ilk retained, they were subordinated to political expediency.

The early Liberal Party, which retained its name until 1917, and its successors – the Nationalists, the United Australia Party and the modern-day Liberal Party – all became essentially conservative parties. Just as the Protectionists were united by opposition to free trade, the conservatives for a century now have been united in opposition to Labor.

The Fusion certainly brought stability; it might also be argued that it also brought sterility, and with it a sharp reduction in the political possibilities for Australia. •

Norman Abjorensen teaches politics at the Australian National University. He is the author of John Howard and the Conservative Tradition.