The human cost of turning back boats is too high, writes Peter Mares. So what are the alternatives? 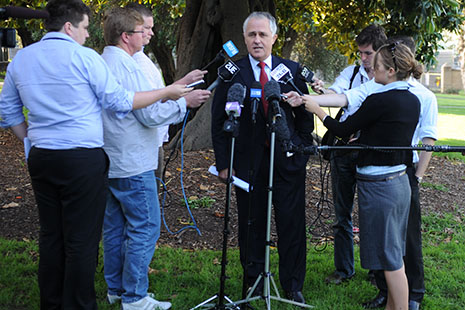 PEOPLE SMUGGLERS have reactivated the maritime route from Indonesia to Australia, and once again we are enduring a panicky, acrimonious media debate while the government attempts to find an appropriate policy response. The complexity of the ethical and practical challenge of this “fifth wave” of unauthorised arrivals is underlined by the terrible events at sea last Thursday.

At the time of writing it is impossible to know exactly what happened. One account, in the Age, suggests that while fuel was deliberately poured on the deck to prime the boat for sabotage, the spark that ignited the explosion was accidental. The report says that some of the asylum seekers aboard the vessel had been turned back from Australia once in the past and were determined not to allow this to happen again. Further investigations should reveal whether this account is accurate and whether a crime has been committed. If it has, the person or people responsible must be prosecuted; in the meantime, we should reject the insinuation that everyone on board is somehow guilty.

If we accept the “accidental sabotage” thesis for now, this raises two questions. First, why would asylum seekers prepare to sabotage their own boat? Second, what are the implications for Australian government policy?

The first question has been answered by the former immigration minister Philip Ruddock. He told the Australian that people smugglers give advice to asylum seekers to disable the vessel they have travelled on to ensure that it cannot be returned to Indonesia. That sabotage of this nature has happened in the past is well documented, not least in relation to the “children overboard” affair. Here is a brief excerpt from the evidence Commander Norman Banks of HMAS Adelaide gave to the Senate Select Committee into a Certain Maritime Incident:

“Efforts to provide assistance, such as water, were not welcomed. Indeed, on occasions, the water that we provided was thrown overboard by the unauthorised arrivals on receipt… With 200-plus irate personnel on board and a boarding team of eighteen, all operating in a small and very unfamiliar vessel, it was not a surprise to me that the vessel was continually being sabotaged. The steering and the engines were disabled at various times. Vandalism and arson had been conducted, and continued.”

It is important to note the context in which these events occurred. Commander Banks had already fired warning shots across the bow of the asylum seekers’ boat, which was known as SIEV 4. (This was the fourth “Suspected Illegal Entry Vessel” to attempt to reach Australian territory since the Howard government had implemented a tough new approach to asylum seekers arriving by sea.) The commander was acting under strict instructions from Canberra to “deter unauthorised boat arrivals… from entering Australian territorial waters” and prevent them “from gaining access to the Australian migration zone.” These orders, imposed in the wake of the Tampa affair, replaced the previous policy of intercepting vessels and transferring those on board to immigration detention on the mainland.

The first level of post-Tampa defence took place on the high seas, where Norman Banks and other navy commanders were hailing boats and ordering them to change course. If unauthorised vessels continued into Australia’s “contiguous zone” (the twenty-four nautical mile limit around an Australian territory like Christmas Island) then “a boarding party was to detain the SIEV, sail it to the outer edge of that contiguous zone and, if safe, release it.”

Commander Banks forced SIEV 4 out of Australia’s contiguous zone as instructed, but remained close by, anticipating – correctly as it turned out – that the damaged boat would ultimately prove unseaworthy and require rescue. When the asylum seekers raised a distress signal he took the boat under tow and proceeded to Christmas Island. The boat broke up on the journey and the asylum seekers on board had to be plucked from the open seas, putting them and the crew of Adelaide at great risk.

When the new measures to force boats out of the contiguous zone failed to deter the SIEV 4 (and SIEVs 1–3 before it), Canberra updated its orders, putting greater stress on the policy of turning boats back. As Rear Admiral Geoffrey Smith told the Senate inquiry, “we received new instructions which were to, where possible, intercept, board and return the vessel to Indonesia” (see pages 26–27 of the Senate committee’s report).

In subsequent weeks, half the boats intercepted by the navy were successfully returned to Indonesia (four boats in total, carrying more than 500 people between them). In my view, the policy of returning boats to Indonesia was ultimately decisive in ending the “fourth wave” of unauthorised arrivals in late 2001.

Of course a range of factors probably contributed to stopping the boats, including the “offshore” processing regime set up under the Pacific solution, the overthrow of the Taliban in Afghanistan, increased cooperation with Indonesia to break smuggling rackets and the deterrent effect of the SIEV X sinking (in which 353 lives were lost). But the Howard government’s success in physically returning vessels trumped all other measures by indicating to asylum seekers waiting in Indonesia that the people smugglers could not deliver on their promises and that money spent on getting to Australia would be wasted.

The discussion about the “softening” of asylum seeker policy under the Rudd government has focused on the decision to end the Pacific solution, create a more humane detention regime and scrap temporary protection visas. But these changes do little to explain why traffic on the maritime smuggling route from Indonesia is once again building. Harsh detention was in place long before the “fourth wave” began in 1999 and did nothing to stop the arrival of boats. (Detention on remote islands in the Pacific was in effect an extension of the existing policy of detention in remote desert locations.) Nor did the introduction of temporary protection visas in 1999 stem the flow of boats. If anything, TPVs probably encouraged the increased movement of women and children because it closed off the possibility of a legal route to family reunion once an asylum seeker had been recognised as a refugee and granted Australian residence.

The “fifth wave” of boat arrivals is the local manifestation of the global increase in asylum applications documented by the UN High Commissioner for Refugees. As such, the phenomenon cannot simply be traced back to a “softening” of Australia’s harsh policies. But the one policy change under Rudd that is directly relevant is the decision to end the post-Tampa practice of turning boats around and forcing them back to Indonesia. As the immigration minister Chris Evans confirmed to me in an interview last year, the Australian navy, is no longer in the business of forced return. “I don’t think that’s been operational policy for some time,” he said. “The reality was, as you know, that the response to that by the people-smugglers was to drill a hole in the bottom of the boat, so the effective tactic of trying to return boats by towing them was thwarted. My understanding is Defence haven’t been applying that policy for some time. If they find people in Australian waters, they take them on board and take them to Christmas Island for processing.”

AND SO to the second question: what are the implications for Australian policy? If the aim is simply to guarantee “no unauthorised boats” (as opposition leader Malcolm Turnbull told Fran Kelly on Radio National Breakfast), then calling out the navy to force boats back to Indonesia could perhaps be effective.

But as Senator Evans pointed out when I spoke to him, the cost of such a policy would be unacceptably high. It would undoubtedly result in further acts of sabotage and loss of life at sea as asylum seekers and smugglers attempted to render their vessels unreturnable. It would tarnish Australia’s international reputation and involve the Royal Australian Navy in a highly politicised task that has nothing to do with military defence. It would force RAN sailors to undertake work that is not only dangerous but deeply distressing, and likely to leave permanent emotional scars. And of course it would do nothing to resolve the very real dilemmas of the asylum seekers themselves.

If turning back the boats is out, then what are the alternatives? The best option appears to be stepping up cooperation with Jakarta and Kuala Lumpur in an effort to intercept asylum seekers before they undertake dangerous sea voyages. Indonesian immigration officials are alarmed by the recent increase in the number of asylum seekers (mostly from Afghanistan, Sri Lanka and Burma) entering their territory via Malaysia. Facilities to house and/or detain foreign asylum seekers are already full, and Jakarta fears being left with a second “Pulau Galang” (the detention island where Vietnamese boat people languished for almost two decades from 1979 to 1996).

As Savitri Taylor describes elsewhere in Inside Story, Australia already has a substantial program of cooperation with Indonesia. But, with traffic increasing, it needs to be improved and enhanced. Two vital ingredients must be added to the policy mix. First, asylum seekers must be assured that their claims for refugee status will be assessed swiftly and fairly. This will require increased resources for the UNHCR. Secondly, asylum seekers must be confident that, if they are found to be refugees, resettlement in a third country will follow soon after. Australia (perhaps with a little help from New Zealand) should guarantee to Indonesia (and Malaysia) that it will find permanent resettlement places for intercepted refugees. This would be a similar policy response to that employed by Malcolm Fraser during the first wave of boat arrivals in the 1970s. In league with other developed nations, Fraser developed the comprehensive plan of action to guarantee resettlement places to refugees sheltering in camps around the region. This reduced the incentive for boat people to travel on to Australia and for Southeast Asian authorities to refuse sanctuary and push boats back out to sea.

Improved cooperation with Indonesia will not stop all boat arrivals and, as Savitri Taylor suggests, the federal government should tell the public why unauthorised entries are likely to continue and provide reassurance that arrivals can be managed in a humane and reasonable manner. But improved cooperation with Indonesia and Malaysia could reduce boat numbers, and even if all of those intercepted were subsequently brought to Australia as refugees, orderly resettlement would help take the political sting out of the issue. Such a policy may even save some lives. •

Peter Mares presents The National Interest on ABC Radio National and is an adjunct fellow at the Institute for Social Research, Swinburne University of Technology. He is the author of Borderline (UNSW Press, 2002), an account of Australia’s policies towards refugees and asylum seekers in the wake of the Tampa.

Essays & Reportage Unpicking the legacy of the Tampa Madeline Gleeson 3 September 2021 Can we use a once-in-a-lifetime pandemic to help us rethink our treatment of refugees? 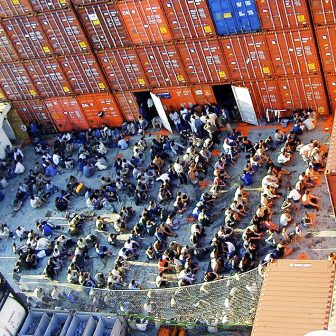