With only lukewarm support from progressives, could Emmanuel Macron lose the French presidential election? 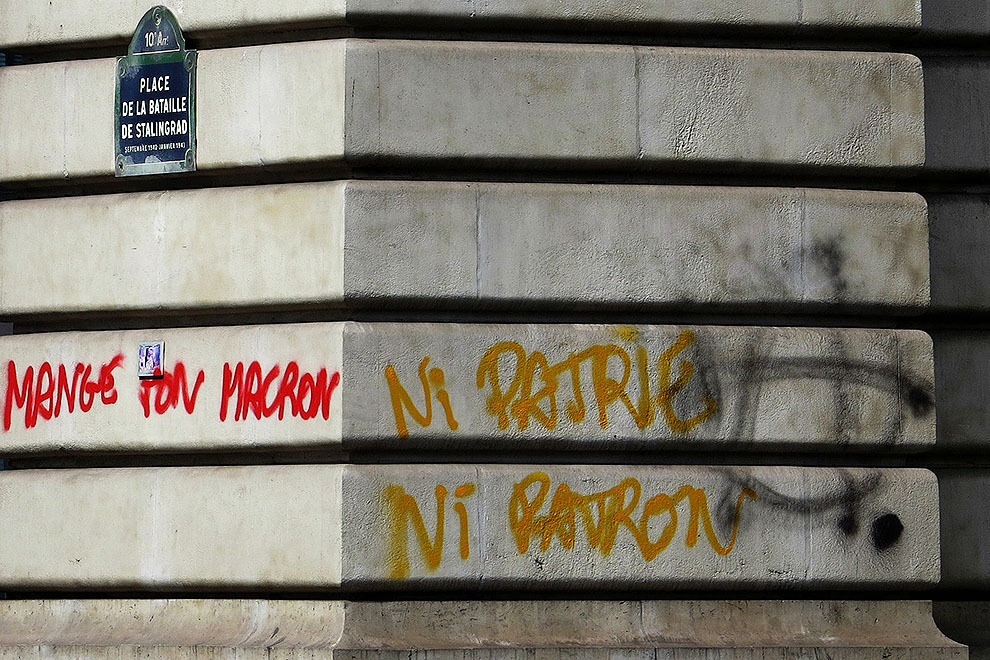 The presidential run-off between Emmanuel Macron and Marine Le Pen in ten days’ time poses a dilemma for many French progressive voters. Macron is seen as one of the main architects of François Hollande’s most unpopular pro-market and antisocial reforms, including the Labour Law that dismantled vital workers’ rights. If elected, he promises a hardened version of the reforms that destroyed the Socialist Party. Le Pen, no less neoliberal than Macron (she has a similar socioeconomic platform to Donald Trump), proposes an authoritarian regime in which the old obsessions of French fascism could thrive.

Between two evils, which one should people on the left choose? The answer seems deceptively straightforward: how could a left-leaning voter choose the Front National? But Emmanuel Macron’s arrogance and incompetence are not helpful. On Tuesday, he went on television to request no less than a “vote of adhesion” (not simply a tactical vote) against Le Pen.

Macron might be the candidate of the political and economic establishment, but the former banker isn’t surfing a wave of popular support. An Opinionway poll carried out after Sunday’s vote shows that 54 per cent of people who voted for him did so tactically. The truth is that the former economy minister has no solid constituency backing him, and no real popularity.

Le Pen has exploited Macron’s awkwardness by pointing out that her opponent is out of touch with ordinary people. Her strategy is clear: she will portray him as the puppet of financial markets, the European Commission and “globalised and cosmopolitan elites.” By contrast, she will present herself as defender of workers, guardian of the national interest, and a true patriot.

Le Pen’s progression to the second round of the presidential election is not a mere re-run of April 2002 when, against all expectations, her father Jean-Marie Le Pen faced Jacques Chirac. Then, the incumbent president trounced the old far-right leader; today, Marine Le Pen has a small but not negligible chance of winning the vote and succeeding Hollande.

Most commentators say this is highly unlikely. They may be right; but it’s possible to look at this issue from a different angle and ask: can Macron lose? The untested candidate could yet make terrible blunders and repel a swathe of left-leaning voters.

On Sunday night, after the first-round vote, Macron and his supporters proceeded to a plush Paris restaurant, giving the impression that they didn’t regard the outcome of the second round to be in any doubt. Le Pen showed up this week at a Whirlpool factory near Amiens that is set to close in 2018, making several hundred workers redundant. She called for “economic patriotism,” and in the coming days she’ll also be stressing the similarities between her social program and that of the eliminated left-wing candidate Jean-Luc Mélenchon (who attracted 19 per cent of the vote) in order to appeal to disenchanted left-wing voters.

Despite the presence of the far-right in the second ballot, the reactions to last Sunday’s results were incredibly muted. Trade unions are more divided than ever and might not march together against the Front National on 1 May. In 2002, a million people took to the streets to protest at the qualification of Jean-Marie Le Pen for the second round. The coming together of a “republican front” (an ad hoc electoral coalition of all democrats against the far-right) was taken for granted and quickly gelled. Today, the emerging anti-Le Pen coalition is more haphazard and less resolute.

Left-wing abstention is the greatest threat of all. In social media, the “Neither Macron nor Le Pen” slogan is gaining momentum; hashtags such as “#SansMoiLe7Mai” (Without me on 7 May) are popular. These are signs of extreme political confusion and evidence of the Front National’s “de-demonisation” in voters’ minds. Some left-wingers claim that “neoliberalism is as bad if not worse than fascism” or that “neoliberalism feeds into fascism.” Others argue that a Macron presidency will guarantee a Le Pen victory in 2022. They forget that abstention might make a Le Pen victory possible as early as 2017.

A poll this week showed that though 50 per cent of Mélenchon’s voters would transfer their vote to Macron, 20 per cent would prefer to vote for Le Pen. This is a major warning to complacent politicians and media. Beating the drum of 1930s-style anti-fascism will not impress young people who don’t relate to that discourse, and further underlines the ideological weakness of the French left.

Most major politicians, parties of the left and trade unions have declared that “not a single vote should go to Le Pen.” This is fine, but it could still encourage abstention. Of all left-wing candidates, only Benoît Hamon clearly endorsed Macron on Sunday evening. Mélenchon has kept quiet until now and might not say what he will do in the second round.

In 2002, when he was a socialist official, Mélenchon emphatically called for a vote against Le Pen. This time he has brushed aside questions, saying his supporters will be consulted on the issue and will give their “non-binding opinion” next Tuesday. If Mélenchon were to keep silent, it would be the most serious act of detoxification of the far-right in French politics.

Between two evils, voters on the left should not hesitate to choose the lesser. First, emphatically defeat the far-right candidate by using the only means at its disposal – a Macron vote. Then start opposing President Macron by gaining a majority in the National Assembly. The left would have a chance to make a political comeback with a neoliberal president in office, but it would be trashed for good if it let the far-right come to power. •

Philippe Marlière is Professor of French and European Politics at University College London.

In the name of the people

Populists across the globe are united by their claim to speak on behalf of “the people.” It’s rarely enough for lasting electoral success

“In the name of the people”: Marine Le Pen addressing supporters at the Grand Palais in Lille last month. Jérémy-Günther-Heinz Jähnick/Wikimedia 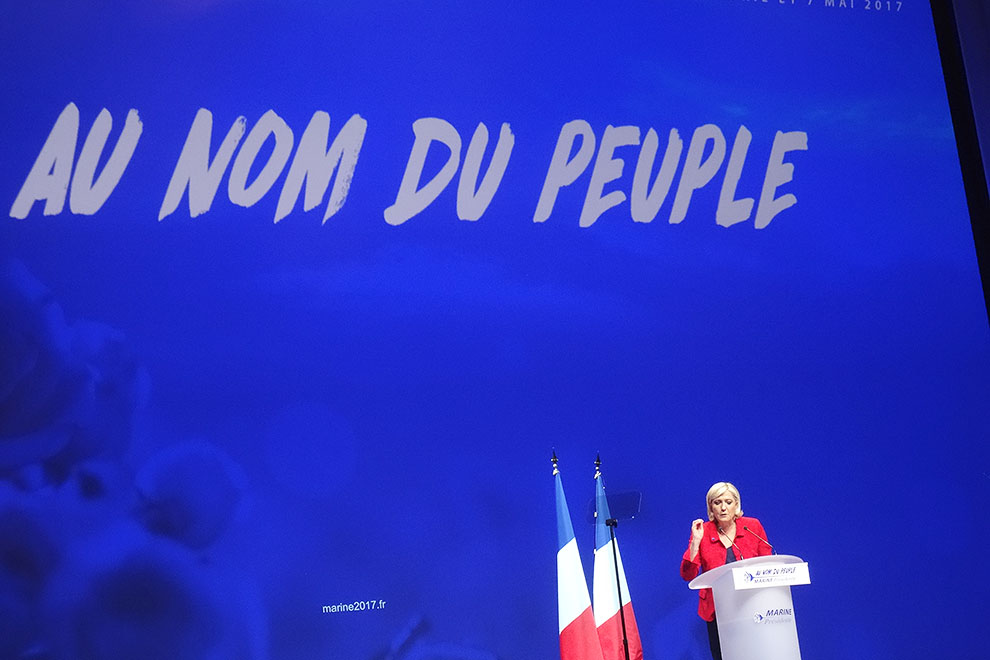 “In the name of the people”: Marine Le Pen addressing supporters at the Grand Palais in Lille last month. Jérémy-Günther-Heinz Jähnick/Wikimedia