A Liberal decision to direct preferences away from the Greens could hit the party hard in the lower house, writes Paul Rodan. But the evidence suggests that not all Liberal voters will cooperate 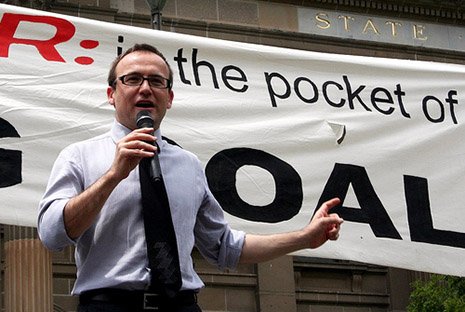 ONE of the most significant points in the November 2010 Victorian election came when the Liberal Party decided to preference Labor ahead of the Greens in the lower house, effectively killing off the latter’s hopes of winning up to four inner-city seats. Liberal preferences had been critical in the Greens’ victory in the seat of Melbourne at the federal election, a point often overlooked in the minor party’s post-election triumphalism.

The preferences decision was seen as a boost for the leadership credentials of opposition leader Ted Baillieu, allowing him to virtually eliminate the possibility of a hung parliament/minority government and hence refocus the election as a straight contest between an ageing unpopular government and the opposition. It had the virtue of ideological consistency in a context where federal and state conservatives were assailing the Greens as anti-growth and anti-development and a threat to mainstream values, even to the Australian way of life. By contrast, the opposition’s main charge against Labor (a familiar one in the now ideology-free zone of state politics) was that it had failed to deliver services and was incompetent.

While some conservatives opposed the change, preferring the strategic advantage of damaging Labor by helping to elect rival progressives, the Liberals’ decision meant they were no longer vulnerable to the charge of assisting a party that, according to some of the more florid conservative rhetoric of the time, was a threat to civilisation. But preferences are ultimately decided by voters, not political parties, even if most people usually do follow the how-to-vote card, especially with “above the line” options in federal and state upper house contests. The Liberals’ decision affords an opportunity to assess the response of party voters in the lower house seats concerned, especially compared with the 2006 state election when the party preferenced the Greens over Labor. Some comparison with preference flow in the federal seat of Melbourne in 2010 is also possible.

The dominance of the two-party system has meant we have little evidence of the preference behaviour of Labor and Coalition voters other than in three-cornered contests where a fairly solid Liberal–National flow each way is the norm. The working assumption has probably been that Labor voters overwhelmingly “prefer” the Greens to the Coalition, although this assumption was questioned by Rob Hoffman and Brian Costar in their analysis of the 2009 Higgins by-election, in which Labor failed to field a candidate.

In the Victorian election, the contest between Labor and the Greens took place in four inner-suburban seats (Melbourne, Brunswick, Northcote and Richmond), with Labor topping the poll in each, Greens second and Liberals third. In all but Northcote, Labor would have lost had the Liberals preferenced the Greens and the preference flows had been similar to those secured in 2006.

In 2006, Liberal preferences in the four seats had favoured the Greens over Labor by a very consistent margin in each seat: 74 per cent in Melbourne, 75 per cent in Brunswick and 76 per cent in Richmond. In Northcote, where Labor secured an outright majority, preference flow to the Greens was estimated at 76 per cent.

It should be noted that these numbers are not “pure” since they include, at point of final distribution, the lower preferences of minor parties and independents who preferred the Liberal Party to Labor or the Greens. (Unfortunately, unlike the Australian Electoral Commission, the Victorian Electoral Commission does not produce a “two-candidate-preferred preference flow.”) But the same point is true of the 2010 figures, allowing for essentially valid comparisons.

Liberal voters in the four seats revealed themselves as less likely to follow the card in 2010 than had been the case in 2006. The percentages observing the party line and putting Labor ahead of the Greens were: 66 per cent in Melbourne; 66 per cent in Brunswick; 71 per cent in Northcote and 64 per cent in Richmond.

A number of explanations suggest themselves. According to the first, the Green-preferencing Liberals took a strategic decision aimed at damaging Labor through the election of candidates to Labor’s left. A second theory would see some Liberal voters in these seats as mild environmentalists not sold on the “Greens as threat to civilisation” thesis. It is also possible, although untestable, that the relevant Green candidates were seen as superior individuals who attracted a personal-based preference.

Thanks to the AEC’s two-candidate-preferred preference flow, a precise figure is available for the percentage of Liberal voters who followed the card and preferenced the Greens over Labor in the seat of Melbourne (which includes much of the territory in the four state seats under discussion) in 2010. At 80 per cent, this was impressive and comparable to the share regularly secured by Labor when it wins seats with Green preferences.

It is instructive to compare this outcome with Hoffman and Costar’s tentative conclusions about that proportion of the (old) Labor vote which, if forced to choose, prefers the Liberals to the Greens. An obvious difference is that such Labor voters, theoretically positioned between Liberals and Greens on a left–right axis, are choosing a proximate option in either case. By contrast, Liberal supporters who prefer the Greens to Labor are leapfrogging the proximate option (Labor) for the ostensibly more radical Greens.

It appears that a proportion of Liberal voters simply regard Labor as the “real enemy” and seek to damage it, unconvinced that the Greens are as threatening as conservative demonology suggests, or perhaps of the view that the end of civilisation is unlikely to be triggered merely by the Greens’ winning a few seats.

All this is of more than passing interest to Greens Melbourne federal MP Adam Bandt, who probably cannot survive without Liberal preferences: loss of Liberal support would see him as a “oncer” – unless Labor polls so badly as to come third. •

Paul Rodan is an Adjunct Professor in the Institute for Social Research at Swinburne University of Technology.

Fewer and cheaper submarines would do the job, writes Brian Toohey

Above: Kevin Rudd, who as prime minister initiated the plan to design and build twelve submarines.
Photo: avlxyz/ Flickr 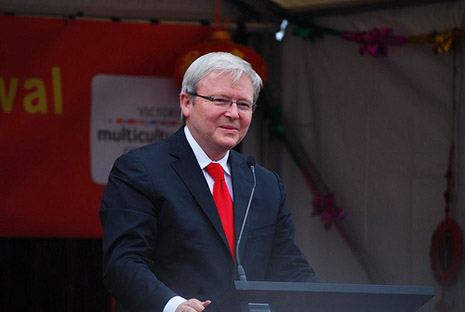 Above: Kevin Rudd, who as prime minister initiated the plan to design and build twelve submarines.
Photo: avlxyz/ Flickr