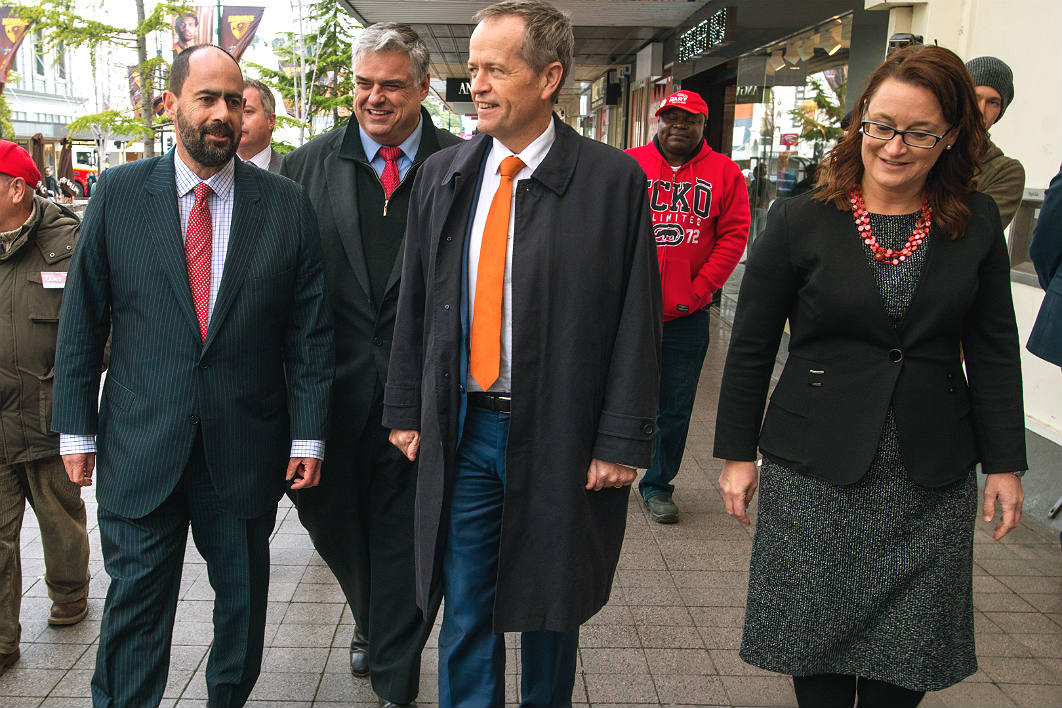 “I’ll deal with that”: Labor member-elect for Braddon, Justine Keay (right), with member-elect for Bass, Ross Hart (left), and Labor leader Bill Shorten in Launceston, on 6 July last year, as the count continued in the federal election. Chris Crerar/AAP Image

It’s been just over a fortnight since the High Court opted for what it admitted was a “harsh” reading of section 44(i) of the Constitution, because the nicer alternatives “would be inimical to the stability of representative government.” Since then, potentially ineligible MPs have emerged at a rate of over one per weekday, and stability is looking further off than ever.

The majority of the new batch are like most of the Citizenship Seven. They say they had no idea they were dual citizens, and acted to rid themselves of their status (more or less) as soon as they could. But a sizeable fraction, mostly from the Labor Party, are the opposite.

Take Tasmanian lower house MP Justine Keay. Labor’s lawyers told her that she might be a Brit in February last year. But the party’s much-vaunted vetting process turns out to be hands-off when it comes to whipping candidates into action. Keay did nothing for three months, acting only when Turnbull called a double dissolution election.

She explains that the delay wasn’t due to incompetence, distraction or laziness, but rather the “serious reflection” the High Court now demands of all candidates for public office. “It’s one of those things with the citizenship I knew I could never get it back. If I don’t get elected I can’t get my citizenship back and, for me, it was a very personal thing. I try not to be upset about it but it was that last tangible connection with my dad.”

Her words go to the true purpose of section 44(i). It is not a test of political candidates’ intelligence, knowledge of their family history, googling skills or respect for the law, but rather of their “allegiance” to a foreign country. As Keay’s (perhaps too honest) account makes clear, her own split loyalties were not to a foreign power, but rather to her own family.

Her explanation notes one of the Constitution’s cruellest details: its requirement that prospective politicians irrevocably rid themselves of disqualifying attributes — foreign citizenship, jobs in the public service, government business ties — not only before the election results are known, but before they even nominate.

Last week, a High Court judge refused to tell a regular ACT senate candidate whether his trick of withdrawing his renunciation of British citizenship every time he loses an election passes constitutional muster. In the end, Keay opted to abandon her British citizenship and managed to win a seat in parliament. The problem is that her hesitation on the former may be fatal to the latter.

Her renunciation of her British citizenship didn’t take effect until two days after she won her seat (and, crucially, a month after she nominated). Indeed, unlike most of the Citizenship Seven, it could be argued that she committed the criminal offence of knowingly making a misleading declaration when she ticked “yes” next to constitutional eligibility on her nomination form. If she were prosecuted and, say, fined for that offence, that would also disqualify her from being an MP.

For now, Keay’s future (and that of several other Labor MPs and a crossbencher) rests on a different argument. Unlike Malcolm Roberts, who remained a Brit on nomination because he fumbled the formalities of renunciation, Keay filled in the right forms, made the right declaration and paid the right fee a month before she nominated.

“What’s frustrating,” she has complained, “is I have done everything possible and I have taken the constitutional requirements that I have very, very seriously.” Citing belated legal advice she received last week, she says, “I would be incredibly confident of getting through that process” of going before the High Court.

She shouldn’t be. Keay and her lawyers seem to be drawing on a widespread misconception that all the Constitution requires of political candidates is “reasonable steps” to comply. Just two weeks ago, though, the High Court adopted Tony Windsor’s argument that “the operation of the constitutional guarantee of single-minded loyalty provided by s 44(i) should not be made to depend upon the diligence which a candidate brings to the observance of the provision.” In other words, there is no try. There is only done or not done.

The sole exception accepted by the High Court is where a foreign country’s processes make it impossible for Australians to rid themselves of foreign citizenship or entitlements. Then, and only then, will reasonable steps suffice. The examples the court gave were about laws that require Australians to travel to an unsafe country or, perhaps, countries with opaque and unhelpful renunciation systems. The British system is the opposite of all that.

To keep their seats, Keay and others like her will have to convince the court that Britain’s (sometimes) two-to-three-month renunciation process is just too slow and unpredictable given the reality of Australia’s nomination process and a candidate’s election chances. That argument might help SA lower house MP Rebekha Sharkie, who lodged her paperwork in mid April, some six weeks before the nomination date (and before the election was even called), but it is unlikely to help Keay.

Indeed, there are sound reasons for the Brits not to rush things, including ensuring that renouncers don’t accidentally render themselves stateless or aren’t the victims or perpetrators of some sort of fraud, matters that are much more serious than Australia’s silly constitutional requirements.

For her part, Keay says that she won’t refer herself to the High Court, citing her legal advice. Her position exposes the unworkability of the tradition of not launching “partisan” referrals, especially when so much about section 44 of the Constitution remains hopelessly unclear. Her legal advice (like the understandable but wrong advice the solicitor-general gave to Malcolm Turnbull months ago) is worthless until it is tested in court.

Keay seems to realise that her position is precarious: “Should the government decide to act in a partisan way and do that, that’s for them to determine. If they want to try to take me out on the way through their crisis, so be it, I’ll deal with that.” Many will say that she has only herself to blame for her predicament. But she is by no means the main culprit. Rather, the blame falls on the Constitution and the High Court’s interpretation of it. The real problem is a rule aimed at weeding out “split allegiances” with other countries that unseats a MP who spent no more than two days in office as a British citizen.

Ex-MP Barnaby Joyce makes a better point about the new rush of potentially disqualified MPs: “Maybe the High Court, if they’d seen them all turn up as a job lot, might have a different perspective on how big this issue is.” I suspect he is right. But that ship has sailed now and can scarcely be turned to save members from just one side of politics. The High Court now demands not only “serious reflection” by all future politicians but irreversible action long before an election is called. Current MPs who understandably hesitated before taking the plunge must now brace for a very rough landing. ●