The man, the moment, the media

History helps explain the Modi government’s historic victory this week. But some parts of the country are still holding out 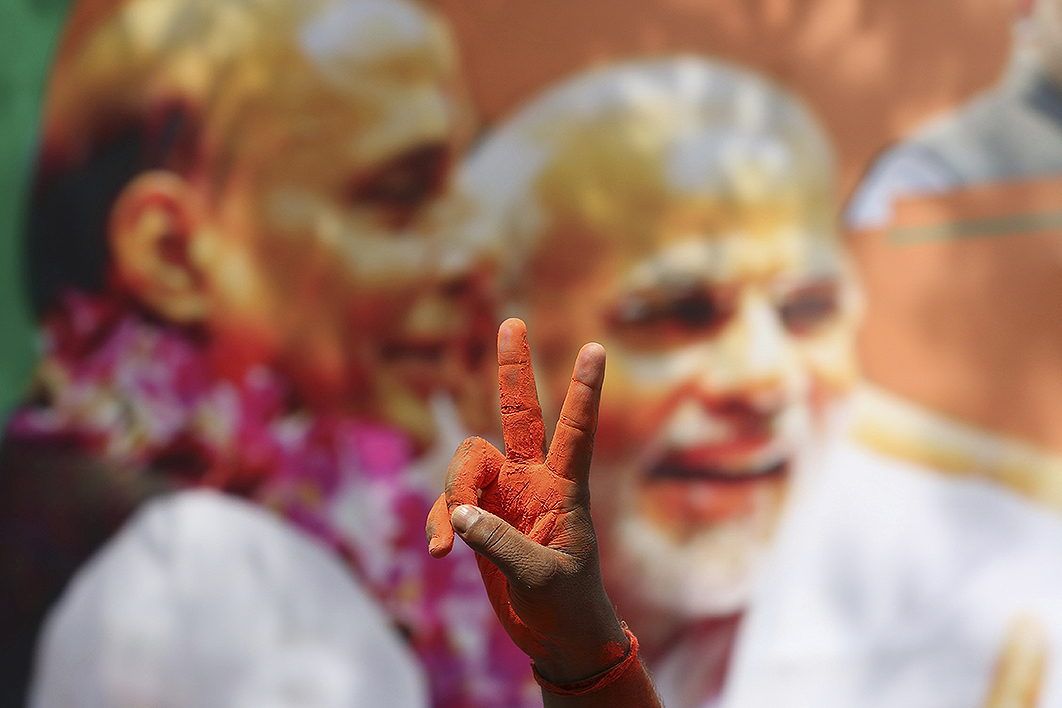 The victory of Narendra Modi and his Bharatiya Janata Party, or BJP, in India’s elections was even more resounding than expected. The medium-term political and social actions are predictable; the long-term consequences are not.

The BJP and its four allies in the National Democratic Alliance look like improving their result in 2014 and winning more than 340 seats in the Lok Sabha and as much as 40 per cent of the vote. They have swept the north and west of the country, captured most of the state of Karnataka in the south, dominated the far-flung northeast and made inroads for the first time into West Bengal, once a communist bastion.

The re-election of a party with a majority in its own right for the first time since 1984 is the result of three interrelated factors: the “Modi story,” an ideologically driven organisation and the media tsunami of the past thirty years.

Let’s begin with the Modi story. The first time the name Narendra Modi appeared in the Times of India, as far as I can discover, was on 23 May 1978 when he was listed as a participant in a discussion about “the youth struggle during the emergency” on a television program called Yuvadarshan (youth vision). Part of the Modi story is that he was a daring young underground organiser during Indira Gandhi’s cooked-up “emergency” and period of authoritarian rule from 1975 to 1977.

That connects the Modi story with the second element in this week’s victory — the Rashtriya Swayamsevak Sangh, or RSS, the Hindu-chauvinist organisation Modi joined as a young man. Modi’s second appearance in the Times of India came on 1 October 1979 when he received a cheque for 500,000 rupees as a contribution to RSS-led relief work after a disastrous flood that killed hundreds of people in the town of Morvi, in his home state of Gujarat. He had established himself as someone who got things done.

Founded in 1925 and modelled on Mussolini-style organisations in Europe, the RSS now has more than a million members. Fifty years ago, when I rode my bicycle on winter mornings to the school in north India where I taught, I used to marvel at the few dozen men in white shirts and khaki shorts who drilled with lathis (staffs, or rods) on a school parade ground before going off to their jobs in shops and offices. They were members of the RSS.

The ideological foundation of the RSS is the belief that India is a “Hindu nation,” suppressed for a thousand years by Muslim and European invaders and enervated today by “secular liberals,” an equivalent of the “rootless cosmopolitans” demonised in twentieth-century Europe. The goal is to establish a strong Hindu nation, enforcing higher-caste beliefs and requiring non-Hindus and other deviationists to conduct themselves as grateful guests.

In the early 1950s, the RSS formed a political party, the Jana Sangh, which reconstituted itself as the BJP in the early 1980s. The relationship between the party and the movement can sometimes be rocky, but they find plenty of common ground at election time. Even as party leader, Modi remains a product of the RSS, and the dedicated RSS cadre has been essential to the rise and rise of the BJP.

Modi’s own rise in the 1980s owed something to the third element in this week’s BJP victory. In 1989, India had a single government television service covering only 50 per cent of the country. There were no more than twenty million TV sets in a population of 800 million, and most programming was ponderous. In 1987, however, a religious serialisation of the epic Ramayana brought the country to a stop on Sunday mornings. Over many weeks, the story of Lord Ram was told, and neighbours, servants and passers-by piled up in front of any available television set. The Ramayana series was followed by the other epic, the Mahabharata. The two series provided a “standard version,” a homogenisation of two great tales that had often been told in distinctive, local ways.

The BJP, far from power in the 1980s and desperate to mobilise support, staged a number of “chariot processions” around the country, echoing how the deities in the TV epics had ridden in chariots. Modi appears to have been a key roadie and organiser for one or two of these popular events.

By 2000, India had seventy million television households receiving dozens of land-based and satellite channels. It was possible and profitable to telecast to all of India and create a single market. This was especially true in the north, where Hindi, spoken by about 40 per cent of all Indians, was the prevalent language.

From the 1990s, benefiting from the expanding possibilities for Indians to see and speak to each other, the BJP’s parliamentary strength grew, and Modi’s prominence with it. He visited the United States in 1994 and 1999, partly to study media practices, and handled the party’s dealings with journalists.

Each of India’s six general elections since 1998 has exploited the latest innovations in media, and the BJP has usually been better at it than their opponents. For a lad who grew up in a world where “media” meant government radio, Bombay movies and a big, bakelite telephone locked in a box in a senior official’s room, Modi has been an eager and astute learner.

Today, no one in India is far from a mobile phone, and smartphone use is into the hundreds of millions. In the current election, the BJP deployed a vast stable of media professionals to out-WhatsApp and out-Instagram its opponents. The BJP had the money to do it well: its coffers overflowed, while the Congress, once the moneybags party, lacked such spending power.

The Congress was unable to stitch together a plausible opposition alliance, and Rahul Gandhi, its languid leader, had little to tell voters that they wanted to hear. Modi, on the other hand, benefited from the bloody scuffle with Pakistan, provoked when a suicide bomber killed more than forty Indian paramilitary police. In retaliation, the Indian air force launched what was portrayed as a brilliant “surgical strike” against “terrorist bases” in Pakistan, and the bold prime minister took some of the credit. A spoonful of patriotic fervour helped the electoral medicine go down.

What happens now? If it is more of the same, that means the continued transformation of state institutions into clients of the ruling party — in education, law, regulation and defence. It means the continued favouring of particular capitalists and entrepreneurs, Gautam Adani among them.

It also means more name changes: “Muslim” places on the map replaced by “Hindu” names. It means more nudge-nudge, wink-wink opportunities to put “liberals” and non-Hindus — Muslims, but also Christians — in their place. “Teach them a lesson” is a phrase you sometimes hear. Modi, of course, was chief minister of Gujarat during such a teaching session in 2002, when hundreds of Muslims were murdered around the state in retaliation for the murders in a small-town railway station of a carriage full of Hindus, apparently by a Muslim mob.

The hollowing out of India’s shaky institutions will continue. Already, the Election Commission of India, one of the country’s most respected institutions, is under scrutiny because its three commissioners are at odds. One of them asserts that his colleagues let the prime minister and BJP get away with flagrant breaches of the campaign code of conduct.

Looking at the electoral map of India, one sees that the north and west, stretching from Karnataka in the southwest to Bihar in the east, have overwhelmingly returned the BJP. But the rest of the south and portions of the east coast, including Odisha and West Bengal, have voted for local political parties.

India’s federation offers a resilient flexibility, but the BJP and the RSS often proclaim that they want to dominate the whole subcontinent. They now have the opportunity to focus on the states that have spurned them so far.

The party will soon also control the upper house of parliament, the Rajya Sabha, whose members are elected by the members of state legislatures. It takes a two-thirds majority of both houses to amend the constitution, something the BJP is likely to want to do to introduce “Hindu principles” and eliminate aspects of “secular liberalism.” In this sense, India seems part of a global pattern of states welcoming “strongmen” who emphasise “national values,” as defined by them.

The BJP and RSS are way ahead of this trend. The Jana Sangh, forerunner of the BJP, laid down in its manifesto long ago that “Bharatiya [Hindu] culture is thus one and indivisible. Any talk of composite culture, therefore, is unrealistic, illogical and dangerous.”

Yet India, with its twenty-two official languages, twenty-nine states, hundreds of castes and millions of Christians, Muslims, Sikhs and Buddhists, constitutes a rich biriyani full of herbs and spices, cashews and sultanas. Trying to make a biriyani into a smoothie may not produce particularly digestible results. •

Next up, a budget ambush?

The Coalition won the political battle, but will it fall into the same trap that blighted previous governments? 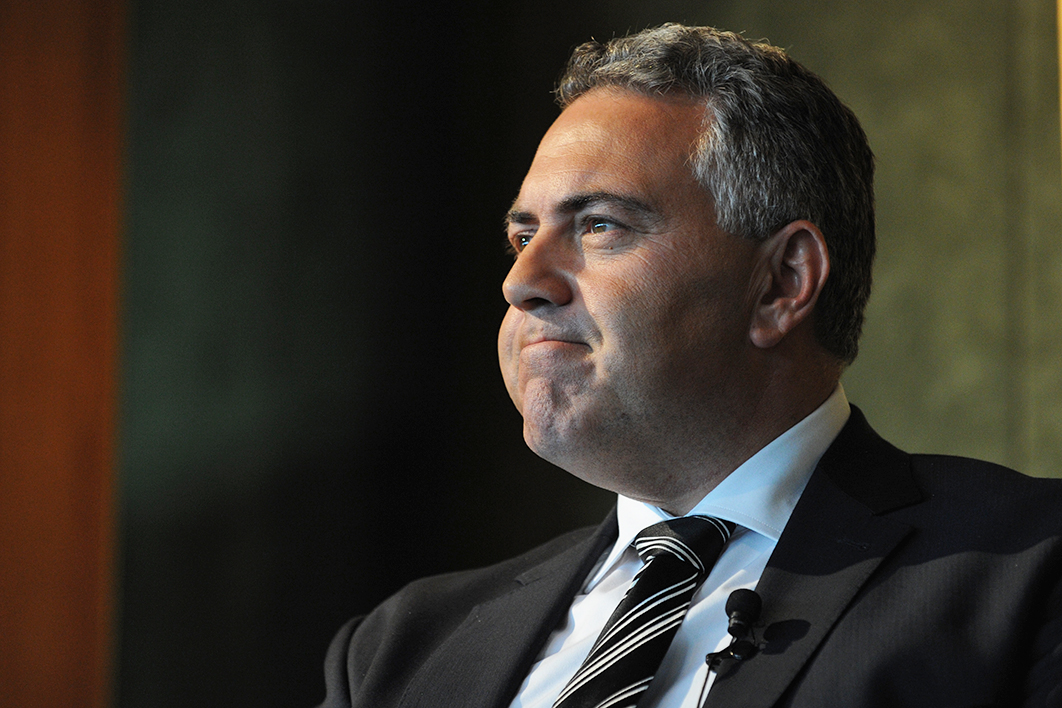