The masked shoe-shiners of La Paz

Poverty and pride combine in the streets of the Bolivian capital, reports Antonio Castillo 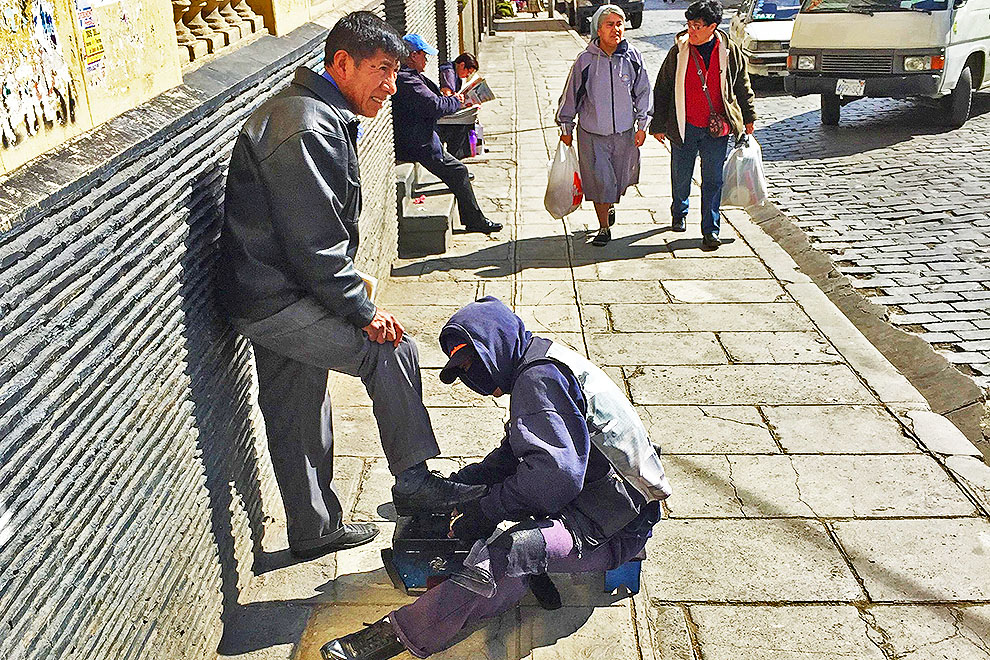 The professional: a masked shoe-shiner at work in La Paz. Antonio Castillo

On a harsh, grey summer’s day, outside La Paz’s central bus terminal, a hoodie-clad young man in a black balaclava spots a drowsy backpacker stepping out of a provincial bus. As she looks around, trying to get a sense of where she is and where she should go, he walks briskly towards her. When he points his stained index finger at her scuffed Timberland boots she begins to panic, gripping her belongings and looking around for help.

“Miss, it is three bolivianos,” he tells her in broken English, muffled by the black balaclava. Trying to undo the misunderstanding, he pointed to his tools of trade – shoe brushes, shoe cream and a piece of yellowish cloth, which he was offering to use on her boots for the equivalent of sixty Australian cents.

“They need a bit of a clean,” he goes on, in Spanish. The shaken backpacker doesn’t answer, and clumsily jumps into the first taxi that pulls over. “I scared her,” the shoe-shiner says, and continues on his way, scouting for less jumpy customers.

He had told me his name is Erwin. It isn’t, of course; after all, the point of wearing a balaclava is that you want to hide your identity, isn’t it? Erwin is one of around a thousand young men – and, recently, young women too – who hide their faces while they perform their daily work of shining shoes in La Paz. It’s a humiliating job, and they have long been socially derided.

I first met Erwin outside La Paz’s white, colonial-era municipal building. It was mid morning on a warm summer day. Erwin – a slender twenty-something young man with vigilant hazelnut eyes – had started his working day at the city’s main bus station and had slowly made his way through the city until he had reached this prime spot.

“You have to fight for it,” he said. A spot like this brings clients, clients bring money, and if knuckles have to be used to dissuade potential rivals then Erwin doesn’t hesitate to use them.

Among the building’s shoe-conscious public servants, Erwin has his loyal clients. “He is the best; fast and funny,” said Emilia, a secretary in the department of social services. “He is honest too,” she added – which is the kind of description rarely given to La Paz’s masked shoe-shiners, who are mainly branded as thieves and drug users.

Erwin didn’t say a word at the beginning. He merely pointed and nodded towards my suede boots. I obediently placed my right foot on top of his blue wooden shoe-shine stand while he dug out a plastic bottle filled with a yellowish milky liquid. (“For suede,” he told me.) The work was done in less than five minutes.

When he charged me four bolivianos, I protested. “Amigo, you charged the previous client only three,” I said. “I gave your shoes the special treatment,” he replied, very seriously. Then he asked me to move on; another customer was waiting in line.

In the gritty but enthralling streets of La Paz, Erwin is one of the people who lubricate the informal economy of this city of more than 700,000. That they are young – between six and twenty-four – isn’t surprising. One of the few studies of the city’s informal economy, released in 2008, showed that nearly 65 per cent of informal workers, from shoe-shiners to street sellers, are children under fourteen. This percentage no doubt climbed after 2014, when Bolivia became the first country in the world to legalise work for children as young as ten (previously, the minimum age had been fourteen).

The first young masked shoe-shiners appeared in La Paz in the 1980s, at the peak of the disastrous neoliberal economic experiment that brought Bolivia – and a large part of Latin America – to its knees. They were the children of the massive indigenous migration from the impoverished countryside to the capital. For the young people with no formal education, unskilled and poor, shoe-shining was a last resort. According to a 2014 census of homeless people, 31.6 per cent of those living in the streets are nineteen or younger, and balaclava-wearing shoe-shiners make up a significant number of them.

At work, Erwin never takes his mask off. “When it’s hot it annoys me,” he concedes, but it also creates a new identity that enables him, and the hundreds of others, to endure daily stigmatisation and harassment.

The mask has powerful symbolic and political force in Latin America. The man known as Subcomandante Marcos – the academic turned leader of Mexico’s Zapatistas guerilla movement – wore a mask, and so did his followers. “We covered our face to be seen,” Marcos declared in one of his lyrical revolutionary writings. In the streets of La Paz, the army of masked shoe-shiners have managed to pull off the same trick; they have become visible.

Erwin certainly looks the part. The grey mask covers his face and the blue hoodie keeps him warm in the sunny mid-morning chill. The fake black Adidas track pants and the worn-out Nike runners are, he jokes, his “work uniform.”

From his shoulder hangs his shoe-shine stand. It carries his tools of trade – the brown, black and neutral brushes, the shoe creams, the creamy yellowish liquid for “special treatments,” and a piece of well-used cloth to add the final shine. The stand is also where the earnings of the day are kept. On a good day, he takes home thirty bolivianos.

Erwin’s home is in El Alto, where the city’s poor and very poor live. Once a suburb of La Paz, it is now a sprawling city in its own right, home to more than a million people. Around 80 per cent of them, according to estimates, are Quechua and Aymara indigenous people in search of a better life in the city. At an elevation of about 4000 – hence its name, El Alto (the Heights) – and nestling against the snowed peak of the magnificent Illimani mountain, El Alto stares down at the busy capital.

Erwin comes down from El Alto to La Paz at 6am each day on board the shiny red Mi Teleférico, the cable car system that socialist Evo Morales, the first Latin American indigenous president, launched in 2014. This vertical umbilical cord makes life a bit more bearable for the thousands of inhabitants of El Alto. “Before the teleférico it took me an hour – if lucky – to get down to La Paz,” says Erwin as he queues at the spotless red-line station for his twenty-minute trip on one of three lines now in full operation.

Bolivia has one of the strongest traditions of social collectivism and unionism in Latin America. It is a communal reaction to the country’s dreadful social and economic fortunes, which have often seemed to hang by a squeaky thread of Alpaca wool. Collective action is evident all over the country, from the association of boat operators on the shore of the magnificent Lake Titicaca to the association of bread sellers in Santa Cruz.

Shoe-shiners are no exception. The first collective initiative goes back to 1996, when the Pérez Velasco Shoe-shiners’ Association was created to give a single voice to La Paz’s shoe-shiners. A decade later, in 2007, the Federation of La Paz Shoe-shiners was set up with an estimated membership of 3000. Unionised shoe-shiners wear a vest to show they belong to one of the shoe-shiners’ collectives, which have given them a collective voice.

The voice of the masked shoe-shiners of La Paz is also heard in the pages of Hormigón Armado, a newspaper founded by Jaime Villalobos in 2005. Roughly translating as “reinforced concrete” and inspired by the Big Issue, the newspaper is published every two months and sold for four bolivianos. Seventy-five per cent of net income stays with the sellers. “The other 25 per cent is saved for medical emergencies,” Villalobos tells me. “The income is also used to run weekly workshops on personal and work development.”

The majority of young shoe-shiners are school dropouts, so the magazine also runs literacy and schooling courses. Over the past few years, under Villalobos’s leadership, the media project has launched another collective financial operation – guided walks for tourists led by shoe-shiners. “They know the city better than anybody else,” says Villalobos. It is an alternative tourist experience; they are able to reach places not mentioned by the major tourist guides.

Erwin has been thinking of getting involved in some of these activities. But I suspect he won’t. His body language says, “It’s not my scene.” “I like to work solo,” he tells me. “If you join an organisation you have to pay registration and I can’t do that. I prefer to keep my money.”

Late in the day, Erwin winds up and heads back to El Alto. “Nobody cleans their shoes at the end of the day, so not much point in staying late,” he says, packing up his shoe-shine stand at around 7pm.

In 2015, almost two decades after the first balaclava-clad shoe-shiners sprang up on the streets of La Paz, the current mayor of the city, Luis “Lucho” Revilla, issued a decree formalising shoe-shining as a professional activity. Nothing has changed in practical terms, and perhaps nothing will; but Edwin’s eyes sparkle when I tell him about it. “A professional shoe-shiner. Sounds cool,” he whispers, giving me a dark-stained thumbs up. • 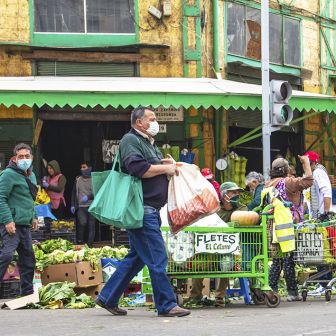 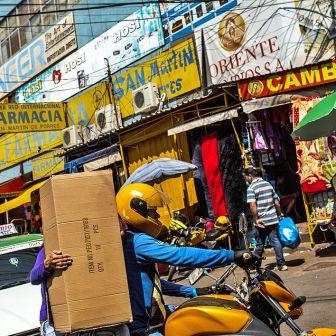