The power of the ballot box

Has the pro-democracy movement gained the upper hand by the most peaceful means possible? 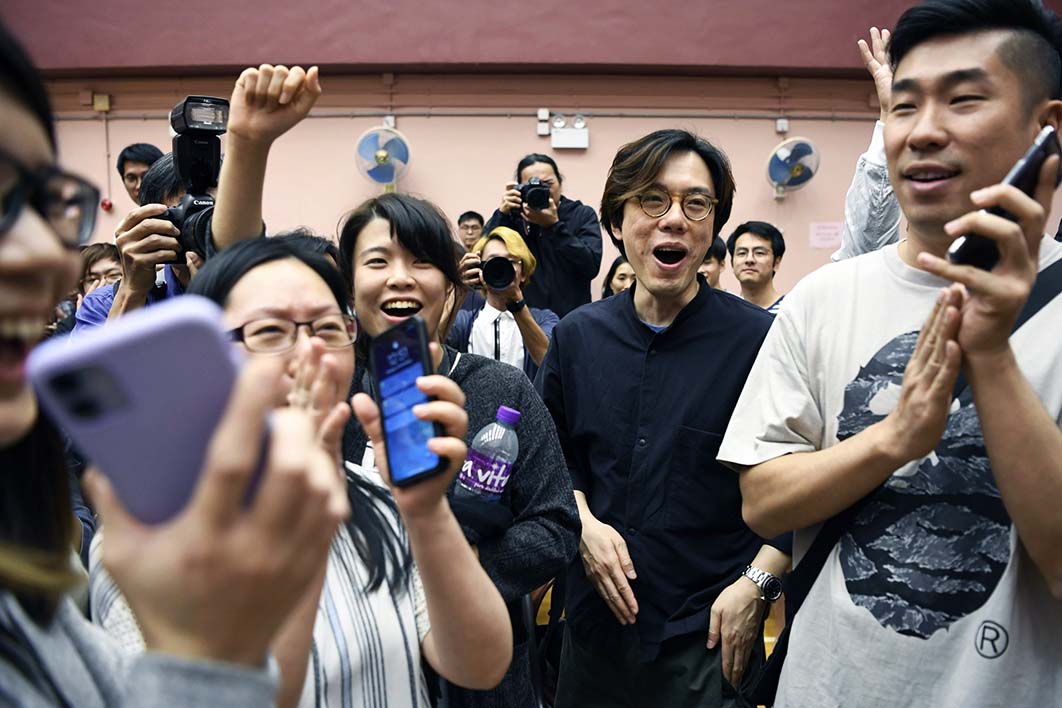 Pro-democracy supporters react to the results in the district council elections on Sunday night. Kyodo via AP Images

The people of Hong Kong keep confounding the stereotypes. With the weekend’s astonishing local election results, they’ve done it again.

In 2014 the city’s students turned the humble umbrella into a symbol of political dissent; this year, the broader population participated in the biggest protest anywhere in the world so far this millennium, when about two million people turned out to oppose the government’s extradition plan.

In recent weeks, some protesters have turned to forms of violence that have repelled many onlookers — but most Hong Kongers clearly see the repressive measures unleashed by the authorities as mostly to blame for the escalation. We know this because of the weekend’s election results, which are a body blow to career public servant Carrie Lam and a clear signal to the party leadership in Beijing.

Of the territory’s 4.1 million registered voters — about a tenth of them newly registered — 71 per cent turned out to vote, the highest proportion in Hong Kong’s history and well up on 47 per cent in 2015. Of the 452 district council seats, pro-democracy politicians won 385, up from little more than one hundred in 2015. The establishment — some say pro-Beijing — grouping was left with just fifty-eight seats, a loss of 243.

The pro-democracy grouping thus seized control of all but one of the eighteen district councils, and will thereby gain about 117 seats on the committee of 1200 that chooses the next chief executive of Hong Kong. The grouping already controls about 325 seats on the committee, so its reach will now stretch to more than a third of that total.

The district councils, ranging from eleven to thirty-seven members elected for four-year terms, undertake similar functions to local governments in Australia. But the wider impact of this vote should not be underestimated. It generates a massive challenge to Lam, and behind her to the general secretary of China’s ruling Communist Party, Xi Jinping, who began challenging Hong Kong’s democratic aspirations early in his first term in the leadership.

It was Xi’s white paper on Hong Kong that helped trigger the Umbrella Movement that brought hundreds of thousands of students on to the streets. The paper stressed that “the central government has comprehensive jurisdiction over local administrative regions,” and contended that its judges should be perceived as administrators whose priorities included exhibiting “patriotic loyalty.”

The outcome of the weekend’s election in Hong Kong will also strengthen the resolve of Taiwan’s centre-left Democratic Progressive Party, or DPP, which is seeking to hold on to power at national elections there on 11 January. China persists in holding out the “one country, two systems” formula as its primary option for Taiwan. But the formula has consistently been rejected by a high proportion of Taiwanese — including the centre-right Kuomintang candidate for the presidency, Han Kuo-yu, who has said since the Hong Kong protests began that the formula would only be introduced in his country “over my dead body.”

DPP leader Tsai Ing-wen, Taiwan’s first female president, appears likely to be returned. The simultaneous election for the Legislative Yuan, or parliament, had appeared to be on a knife-edge, but the Hong Kong crisis continues to tip likely support the DPP’s way, to Beijing’s chagrin.

The weekend’s result in Hong Kong follows swiftly on last week’s ruling by the territory’s High Court that the government’s ban on face masks is unconstitutional. A spokesman for the National People’s Congress in Beijing, which retains ultimate oversight of Hong Kong, responded that the court lacked the jurisdiction to make such judgements. Yet it was given exactly this role by the Basic Law, the constitution agreed between the PRC and Britain before the handover in 1997. The National People’s Congress has the power to overturn the court’s ruling, but only if the Hong Kong government initiates a formal appeal.

The streets of Hong Kong were calmer as voting proceeded, and the result may help cement a sense that the pro-democracy forces have gained the upper hand — as unlikely as that seems, given the disproportionate power involved — and thus reduce the violence in the streets and on the campuses.

The election makes Lam’s grip on power seem even more tenuous, and makes more likely a form of temporary accommodation that focuses, perhaps, on issues of economic and social inequality and opportunity. Lam says she respects the results, but she is in no position to say anything else.

The response from the official Chinese media has been measured. China Daily editorialised that the election “will hopefully have served as an opportunity to return the city to normal,” and the highly nationalist Global Times also focused on the election taking place in “a largely safe and orderly environment.” Pro-establishment groups “will not be discouraged,” says the paper, and Hong Kongers “who love the country” won’t be disheartened. “As long as elections are held, there will be swings,” it added in very democratic style. But it concluded that the “development and progress” of China — of the party, in other words — “are unstoppable.”

Like the publication last week of the leaked Xinjiang cables, the election underlines persistent questions about the viability of the party’s ambitious project to transform what was a pluralist, diverse empire into a unitary, ethnocentric nation-state. •