The Queen is dead! Long live the president? 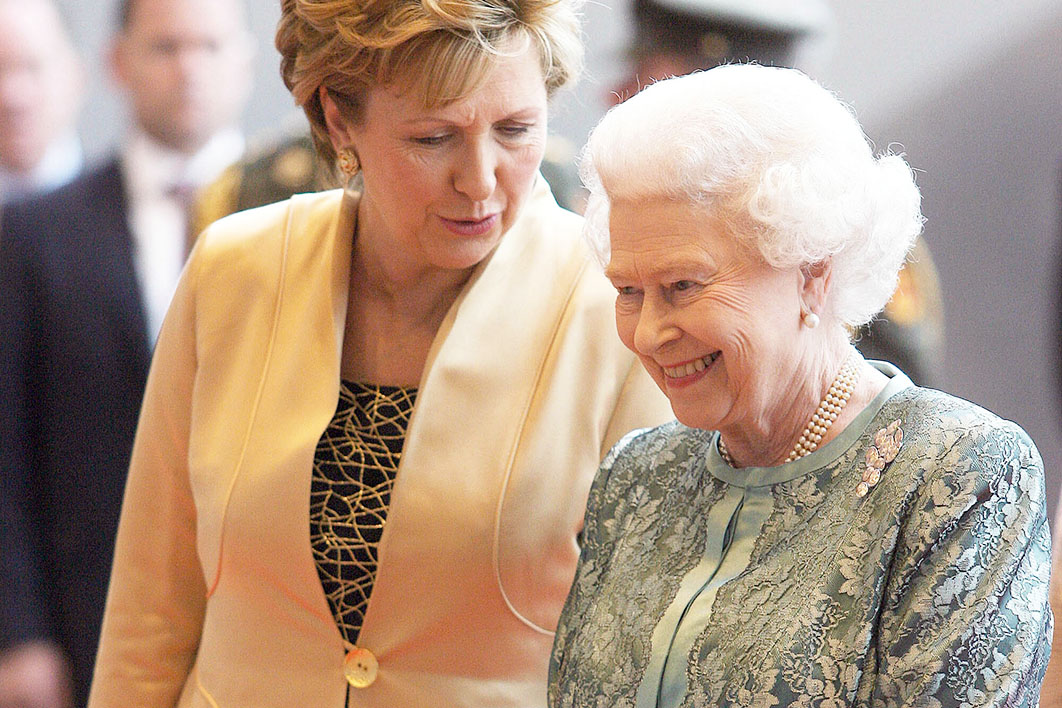 Popularity stakes: Ireland’s then president Mary McAleese with Queen Elizabeth in Dublin in May 2011. AP Photo

It’s no surprise that the death of Queen Elizabeth has renewed the debate about the future of Australia’s constitutional monarchy. Looking at the question from here in Ireland, I’d argue that the key question is not whether to move to a republic but rather: if a republic, what kind of president?

Of course, talk of presidents naturally brings to mind the United States’ powerful chief executive. But that’s a false comparison: a dramatic shift from a parliamentary to a presidential model of government is not on the cards for Australia. Better to look at parliamentary systems that already have presidential systems. What they have in common is that their presidents tend to be symbolic figureheads more akin to a constitutional monarch than an American-style president.

Proponents of the republican cause in Australia might therefore like to look more closely at the Irish experience of presidentialism. Ireland was once part of the British Commonwealth, as Australia still is, but it adopted a directly elected presidency eleven years before formally leaving the Commonwealth in 1949. Like Australia, it has a parliamentary system of government with a strong prime minister, but it has managed to weave a president into its political fabric without too many hiccups.

What could Australia hope to learn from the Irish presidency? The first is that the president, by necessity, is more a symbolic than a political figure. When the presidency was created in 1937, some people feared it was part of a ploy by the then prime minister, Éamon de Valera, to create an elected dictatorship, but that anxiety primarily reflected the tense political atmosphere of late 1930s Europe.

Any concerns were quickly allayed by the election of the non-partisan Douglas Hyde, a retired professor of modern Irish and a leading cultural revivalist, as the office’s first occupant. Hyde was supported by all political parties and sought to stay out of the limelight for the duration of his seven-year term, adopting a minimalist interpretation of his role. Had a more political figure sought and won the office, and gone on to challenge the government’s authority, a different type of presidency might have evolved. The message for Australia is that, regardless of how the institution is designed, the tone is very much set by early incumbents.

For this reason, some thought needs to be given to the electoral rules for a president, beginning with candidate eligibility. Would anyone be allowed to run for a hypothetical presidency, or would eligibility be restricted, for example, to citizens aged thirty-five or older (as is the case in Ireland and the United States)?

To run for the Irish presidency requires either the signatures of twenty of parliament’s 220 members or the support of four local councils, all of which are party-controlled. The one exception is that current or former presidents can nominate themselves. That clause hasn’t caused problems to date but could easily do so if a disgruntled former president (inspired by a recent counterpart across the Atlantic, perhaps) wanted to disrupt the process. The nomination process is specified in the constitution and can only be altered by referendum.

Ireland’s major parties have kept a firm grip on the process, especially up to the 1990s, even colluding on a number of occasions to ensure no election was necessary when they agreed on a candidate. The level of parliamentary support required for a nomination means that only Fianna Fáil or Fine Gael, historically the two largest parties, could field candidates. No Fine Gael candidate has ever been elected to the presidency, so when the party decided not to oppose Fianna Fáil, there was no contest.

That’s why presidential elections were the exception rather than the norm. Ireland’s directly elected model looks quite different from processes in other European countries, where parliaments rather than the people select the president, but has always been closer to that model in practice.

In recent decades, though, Ireland’s political parties have relinquished some control over the process by allowing their own local councillors to nominate independent candidates. The consequence of a more open system has been greater competition, with as many as eight independents securing nominations at the past two presidential elections and winning a combined total of almost 40 per cent support on both occasions.

The only attempt to change the nomination process more fundamentally was a referendum to extend candidate eligibility to citizens aged twenty-one and over. It was held on the same day as a marriage-equality referendum in 2015, but the overwhelming level of support to end relationship discrimination didn’t carry over to the presidential question, which was easily defeated by a three-to-one majority.

Aspirant presidential candidates in countries such as Bulgaria, Finland, Iceland and Poland can circumvent parties by securing a particular number of voters’ signatures to run for the presidency, but that option isn’t available in Ireland. Political parties have an open and stated fear of celebrities or media personalities using this avenue to get on the ballot, potentially undermining the presidency if elected — or worse, putting it into direct conflict with the government.

That’s not to say that the president has many powers to challenge the government. But some, including the power to send a parliamentary bill to the Supreme Court to test its constitutionality, create a potential clashing point. That particular power has been exercised on fifteen occasions by different presidents, and the Supreme Court has struck down the proposed legislation seven times. One of those referrals drew criticism from a government minister, and the then president, Cearbhall Ó Dálaigh, ultimately resigned in 1976 when the minister was not rebuked.

With all bills requiring the consent of the president to become law, it’s no mystery why the parties are unlikely to open up the nomination process anytime soon.

What about the election itself? This process should be a bit more familiar to Australians, since Ireland is one of the few countries that uses preferential voting to elect its president. While most European countries use a two-round ballot, the Irish system — like Australia’s — is what is known as the single transferable vote. On only one occasion, when Mary Robinson beat Fianna Fáil’s Brian Lenihan in 1990, has a candidate with the largest number of first-preference votes been beaten.

Such an outcome might lead to the reasonable conclusion that parties in government usually get their candidate elected, but this has not proven to be the case in recent years. Voters have treated the presidential contest as a classic second-order, midterm election — in other words, as a means of expressing their opinion on the government of the day rather than the candidates running for office. This can give presidential elections an additional political dimension that opposition parties can exploit as a means of attacking the government.

In terms of who gets to vote in presidential elections, the franchise in Ireland is restricted to Irish citizens resident in the country. Unusually, Irish citizens living overseas are not allowed to vote in elections. Given the size of the Irish diaspora — estimated at several multiples of the resident population — successive governments have been reluctant to embrace overseas voting.

Earlier this year, however, it was announced that the government will hold a referendum before 2024 on allowing Irish-born people living abroad the right to vote at presidential elections. If this significant change were passed, the devil would be in the detail. Would all votes be counted equally, for example, or would overseas citizens have their votes weighted? If the former, then it could be possible for a president to be elected without majority support among the resident population.

These issues and more demonstrate that Australia faces complex questions if it decides to go down the republican route and adopt a presidency. Despite the controversy and confusion when it was introduced, Ireland’s presidency has endured, with recent incumbents among the more popular politicians in the country. Such popularity would be especially important for the first incumbents of a hypothetical Australian presidency. As the Irish experience shows, careful consideration needs to be given to the design of such an institution lest it tarnish the republican cause. •