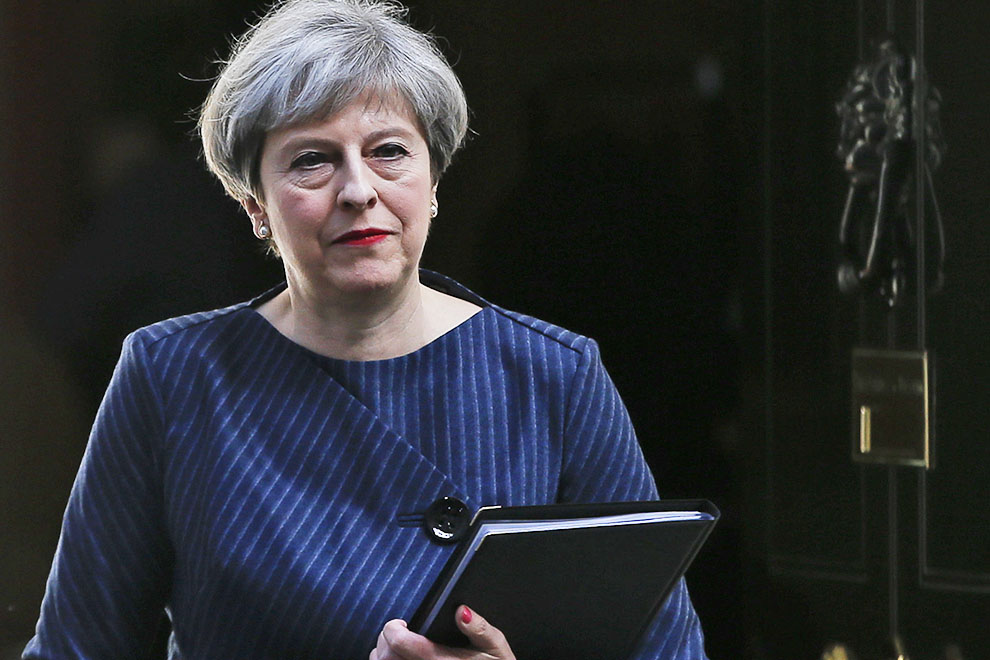 Theresa May caught everyone by surprise, including her own cabinet – and perhaps even herself. Nine months after the United Kingdom’s post-Brexit tailspin saw her elevated to the premiership, expectations of an “early election” had greatly diminished. Indeed, the fact that these had acquired little traction was largely due to May’s own stern rebuffs. Yet here she was, on the morning after the Easter weekend, undoing her consistent view as she declared a general election for 8 June. The embossed lectern in the middle of Downing Street allowed a clear view of the door of Number 10, the assembled media pack, and the grave pieties of a coiffed prime minister.

The pretext? “Division in Westminster,” with its potential to “risk our ability to make a success of Brexit” and cause “damaging uncertainty and instability to the country,” was the odd phrasing. What, after all, can be more intrinsic to politics than division, or bringer of more uncertainty than an election? Decoded, the meaning is plainer. May’s working majority of seventeen in the House of Commons inhibits her government’s freedom of manoeuvre vis-à-vis the European Union in the tough Brexit negotiations to come. It leaves her parliamentary adversaries (including in the House of Lords, where non-Conservatives are in the majority) with ample room to delay the process and give succour to nefarious continentals. And, more coded still, it hands inordinate influence to a hard core of Tory Europhobes in their efforts to block or derail unavoidable compromises.

In these terms, the hunger for a pliant Commons makes political sense. Yet May’s blindside also carries risks: above all, she will be fighting a campaign on a priority that voters refuse to share. A shivery precedent for Conservatives is May’s predecessor Edward Heath, who in the fuel-deprived winter of 1974 asked the people to confirm his authority only to find that soaring prices mattered more than striking coal miners. May wants a strengthen-my-hand-on-Brexit election. What if the answer, at a time of squeezed budgets and concern over inequality, is a “fairer Britain” one?

Heath, a convinced Europhile – these days a near-extinct breed in the party – was replaced a year later by Margaret Thatcher, the first of three Tory prime ministers who found the tigers of “Europe” and “sovereignty” a perilous joint ride. Burgeoning anti-Europeanism in the party and a raucous press eventually won a stunning triumph in the referendum of June 2016, giving Brexit an inviolable popular mandate but offering no certainty over its terms or timing. In the vacuum, the enigmatic May – having cultivated a quiet aura of firmness and clarity in six years as home secretary, a “remainer” who now embraced the “leave” cause with a certain relish – offered herself as a trustworthy navigator towards the nebulous “global Britain” of her overheated rhetoric.

In the bewildering post-referendum months, she came by default to personify the mature centre of an otherwise directionless polity, whose leading ministries were occupied by febrile Brexiteers she had appointed. Yet her own language on Brexit and its implications could suggest a convert’s zeal, as when she told the Tory conference in October that “if you believe you’re a citizen of the world, you’re a citizen of nowhere.” Her twelve-point plan in January, with its rejection of the EU’s single market and preference for “no deal” over a “bad deal,” was notably sharp. And her historic letter to the European Commission in March, which began the formal procedure for the UK’s departure from the EU, might have been more emollient in tone but angered leading Europeans by implying a link between a future agreement on trade and cooperation on security.

Throughout, May’s standing in the opinion polls remained high and her party’s lead over the Labour opposition substantial. Strategically, her government looked at best uncertain, at worst needlessly hostile towards its negotiating partners-to-be; politically, it had no pressing reason to worry (or even, as several sources attested, to think much about what Jeremy Corbyn’s Labour was up to). But then, in February, Nicola Sturgeon’s Scottish National Party launched its campaign for a second independence referendum, and in the following month elections to Northern Ireland’s assembly brought gains for Sinn Féin and renewed focus on the dangers of a post-Brexit “hard border” between the island’s two states. Only then did it seem to dawn that the government’s European stance might have profound consequences for parts of the UK which, unlike England and Wales, had voted to stay in the EU.

Scotland’s political cycle is especially significant. The SNP’s sweeping victory in the Edinburgh parliament’s elections in 2016 – a month before the Brexit vote – gave the pro-independence party its justification to press for a new referendum, which requires London’s approval. Its preferred date is 2018–19, well before the next Scottish elections in 2021, which could overlap with the putative climax of the UK–EU talks. (Allocated a two-year span by the famous Article 50 of the relevant EU treaty, these should conclude by 29 March 2019.) The current political stand-off between May and Sturgeon is as rancorous, and as high-stakes, as it gets in the democratic world.

Thus the pace of events has accelerated since the turn of the year. Against this backdrop, significant Conservative figures pressed May to go to the country. William Hague, former leader and foreign secretary, wrote in March that the prime minister and cabinet “would be in a stronger position” to meet key challenges – here citing the Trump administration as well as Brexit and Scotland – “if they had a large and decisive majority in the Commons and a new full term ahead of them.”

That fragile majority, when by-elections and backbench revolts are taken into account, was frequently cited by others making the case. So was May’s reputed need for a personal mandate. Here, Gordon Brown’s experience in 2007 is instructive; after he inherited the premiership from Tony Blair, his Tory shadow George Osborne took cruelly intelligent advantage of his indecisiveness over an early election. Brown never recovered.

If May were prepared for another change of mind, she faced a new obstacle: the Fixed-Term Parliaments Act, passed in 2011 by the Conservative–Liberal Democrat coalition of 2010–15. This specified a five-year term between Westminster elections, excepting a no-confidence or a two-thirds-majority vote in the Commons. A “constitutional reform by political fix,” it was typified by Osborne’s cursory replacement of “four” years by “five” in the draft.

In the event, at its first test the act has proved a paper tiger. Now that May has “recently and reluctantly come to [the] conclusion” that an election is needed, too few MPs are ready to keep the voters waiting. A decision made over Easter while walking with her husband, and informal adviser, Philip in north Wales, and announced on Tuesday, is set to be confirmed by the Commons on Wednesday, with parliament dissolved two weeks later. A day after that, council elections across Britain and those for eight new city mayors in England will be held, signature events now also rendered a prelude. By June, there will have been six Scotland-wide votes in six years: for Scottish, European, and two UK parliaments, councils, plus the referendum.

That detail alone casts a shadow on Theresa May’s undisturbed sheen of command outside Downing Street on the beautiful London morning of 18 April. It is less than three years since David Cameron greeted Scotland’s referendum result as a time “to “build [a] brighter future for our entire United Kingdom”; under two since he pledged to govern “as a party of one nation, one United Kingdom”; ten months since he conceded that Brexit “is an instruction that must be delivered”; and nine since May promised to “make Britain a country that works for everyone.”

The glad confident moments and the sad chastened ones accumulate, but Westminster’s hold over a disjointed realm grows ever less sure. A prime minister has now called an election in the manner of throwing a gauntlet. Whatever the outcome, this is an unhappy day in an uneasy country. •

How should authorities deal with a fast-growing electoral roll that hasn’t translated into a comparable lift in voting? 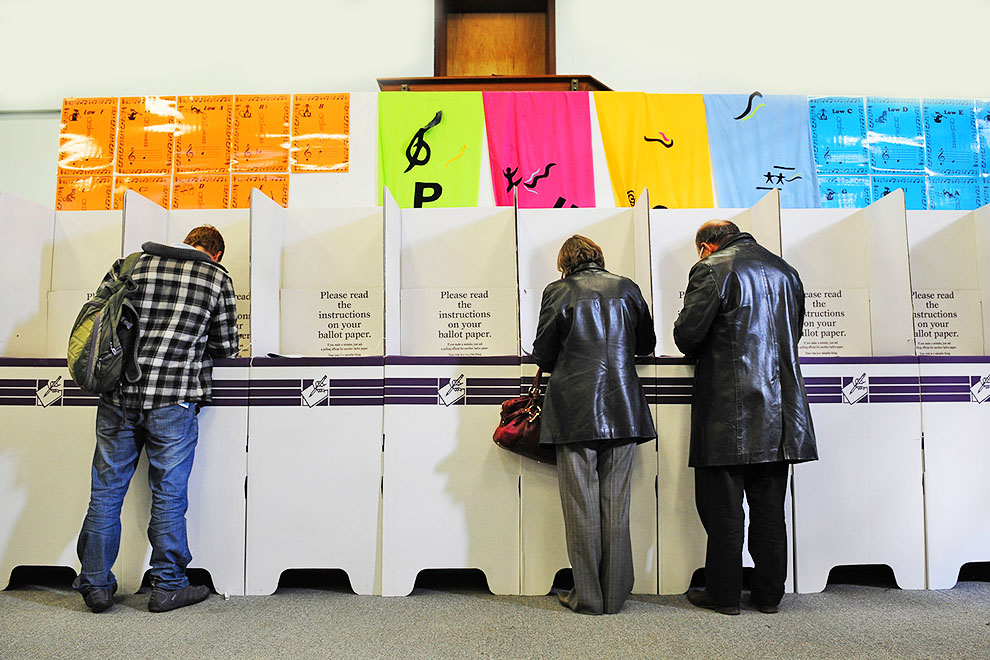