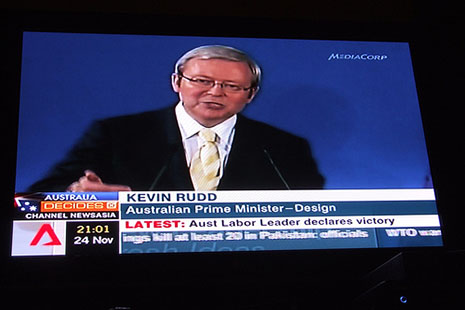 FOUR YEARS AGO, in mid 2006, prime minister John Howard performed a feat so impressive, so unexpected, that it left political observers searching for superlatives. Tony Wright in the Bulletin found it “spectacular”; for the Canberra Times it revealed the prime minister “at his pragmatic best.” And Alan Ramsey in the Sydney Morning Herald, while assuring readers that Howard was still “a toad and an international lickspittle,” waxed that, “as a politician, in every insinuating nuance of the word, the others aren’t up to wiping his boots.”

Which act of political derring-do earned him such accolades? Was it, perhaps, negotiating an important package through the Senate? Or maybe emerging from a grinding COAG gathering with an unlikely but triumphant agreement?

No, the prime minister had announced a policy backflip. On the privatisation of the Snowy Mountains Scheme, a reform he had been urging for months with the support of the federal opposition and the governments of the two states involved, New South Wales and Victoria. Much time and energy had gone into the process, but it had become crippling unpopular in New South Wales, so Howard ditched it.

At the height of Howard-mania, when his every action was interpreted as genius, it did him little harm with commentators. Rather, he had masterfully applied the “wedge” to Labor. The “conviction politician” tag buttressed him through this and many other backdowns.

Many have compared Kevin Rudd unfavourably with his predecessor when it comes to political courage, but when pushed for evidence they generally have to reach back – way, way back – to 1998, the GST election.

The Hawke–Keating years are also remembered as a golden age of conviction, but there’s much rosy hindsight there, too. Bob Hawke was, after all, nicknamed “Jellyback” by at least two of his senior ministers. And comparing first terms, 1983–84 was just as disappointing as 2008–09 to party loyalists who had memories of the previous Labor government; they saw in the current one a pale imitation of the Liberals. The 1983 dollar float is seen today as an important reform, but it was announced suddenly and only noticed by market people and political and policy types. It hardly got middle Australia out on the street. True, the assets test on pensions – opposed by the Coalition – was not the sort of thing we can imagine Rudd considering. But the best word to describe Hawke’s approach to re-election in late 1984 is “cautious.”

This provides some context for today’s accusations of prime ministerial spinelessness. The stories told about the thirteen years of Labor, and eleven and a half of Coalition, don’t always reflect what was happening at the time. At different times these governments stood for different things, and both Howard and Hawke sometimes appeared not to know why they were there.

Still, it must be said that Rudd is an extremely uncourageous prime minister. It is not just that he obsessively avoids doing anything contentious, and retreats at the whiff of grapeshot. At a fundamental level he lacks the confidence to explain the government’s position on anything. When pressed, he offers generalities or shifts into meta-drive, boasting about how courageous he is.

The line that voters want Kevin07 back has it wrong. The problem is that he is still Kevin07. Like most successful opposition leaders, he ran a small target strategy, but unlike the others he kept to it in office. The almost total conflation of policy and politics is opposition terrain; in government it is dysfunctional.

Rudd doesn’t grasp that being prime minister brings certain attributes and certainties. And people don’t expect incessant grovelling from someone in a position of great authority. It doesn’t sit right; in fact, they expect on occasion to be told what is good for them. Yet, from the latest tabloid/pop “controversy” to high economic policy, Rudd’s instinct is the same: parrot what he perceives as the “average Australian” view. On the two potential headaches – the emissions trading and government debt – the government’s communication has been woeful. One has been junked; the other is not going away.

But is this the end for Rudd? Two opinion polls this week – first Tuesday’s Newspoll, then yesterday’s Morgan – showed party support that, if repeated at an election, would probably see a change of government. The government’s behaviour shows they believe they are in trouble. Rudd’s dumping of his emissions-trading scheme after years of extravagant language has seen the “gutless” tag achieve general currency. He knows this, so proclaims his bravery ever louder. Can he get out of this strange place?

The mining industry's “go back to Russia” hyperbole on the super-profits tax possibly indicates it sees the PM as a soft touch. And having been so timid in the past, there is a risk that when he finally feels he can’t back down this time, it will be something that really should be junked.

But while this does not make for good government, it is not likely to lead to a loss in 2010. People’s respect for the prime minister has dived, but this doesn’t mean they are going to throw him out. Cowards do usually live to fight another day.

If the 2010 election campaign becomes a referendum about the prime minister and his spin and emptiness, and if Rudd obliges by descending further and further into self-parody, and if the opposition somehow manages to wrap it all together with government debt and stay out of the spotlight itself, then perhaps Abbott can win.

But this is unlikely. Most federal elections are decided by two questions: have the voters had enough of this incumbent and, if they have, are they comfortable with the prospect of the alternative? Even if Rudd’s behaviour creates the conditions for the first, the second is very difficult.

It was Abbott’s elevation to the Liberal leadership that brought some contest to federal politics. But on election day Abbott will be a difficult opposition leader to vote for, much more difficult than his Liberal predecessors. Those Mark Latham comparisons are apt.

And if Rudd does win this election, and handsomely, then “everything,” to quote the environment minister, “will change.” We will all realise he always knew what he was doing: he called the opposition’s bluff on the emissions trading scheme, took on the miners and carefully, brick by brick, rebuilt his electoral stocks. He wedged the opposition, and he will, like all re-elected leaders, be seen as a “scrapper,” someone who is “best with their back against the wall”.

Peter Brent is Visiting Fellow at the ANU and publisher of Mumble.

“We have jumped forward and gone backward in the space of my adult lifetime,” says one Vietnamese woman. Norman Abjorensen reports from Hanoi 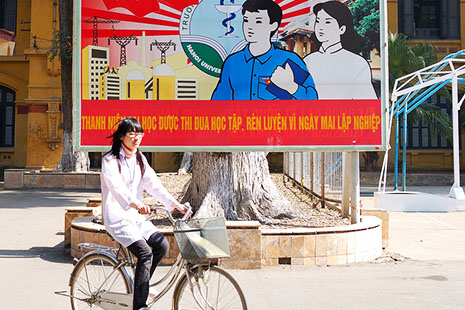