A new collection of letters traces the life of the “outrageously gifted” composer of West Side Story, writes Andrew Ford 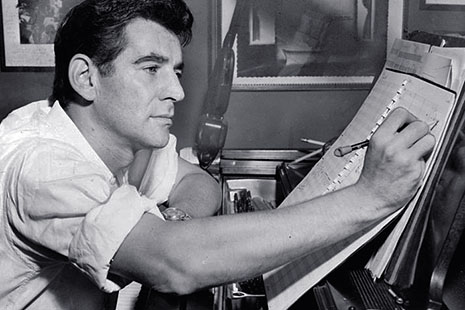 ALL artists – the good ones, anyway – are a mix of ego and insecurity. Without ego, their art would lack passion; without insecurity, self-criticism. Generally artists have more of one than the other, and in Leonard Bernstein’s case, the ego certainly won: his insecurities were of the self-dramatising kind, and so also, to a large degree, egotistical. It’s pop psychology, I know, but there is a lot in The Leonard Bernstein Letters to bear it out.

Bernstein (1918–90) was an outrageously gifted musician. He might have become a concert pianist, a composer for the concert hall, a composer of musicals, an educator, a popular TV personality or a conductor: instead, he was all of these things. Given that he only possessed the time and energy allotted to a single human being, he was unable to apply his talents equally. The world remembers him as a charismatic conductor – perhaps the most famous conductor who ever lived – and as the composer of West Side Story, and the world is probably right.

Nigel Simeone’s nicely edited and well-annotated selection of letters – to Bernstein, as well as from him – allows us to see the man across his career. The young artist wheedles and ingratiates, as young artists will, demonstrating little self-doubt. It helps his prospects that, from the outset, he is a hugely attractive personality – brilliant, outgoing, handsome. One of Bernstein’s early mentors, the conductor Dimitri Mitropoulos, requests a photo of the nineteen-year-old to take on a European tour, and Bernstein obliges (“Your picture is so good, I like it, God bless you!” Mitropoulos replies), but later another father figure puts him in his place. Invited by the great Serge Koussevitzky to guest conduct his Boston Symphony Orchestra, the twenty-eight-year-old proposes a piece of his own. Koussevitzky, clearly shocked, asks Bernstein if he really considers his music to be “on the same level as Beethoven, Schubert, Brahms, Stravinsky, Prokofieff [sic], Bartók or Copland?” Mortified, though standing his ground, Bernstein replies that his work is “not on a level with Beethoven and Bartók, naturally” but that he believes in it “in its own smaller terms.”

It is interesting that Bernstein doesn’t mention Copland in his reply. Aaron Copland was Bernstein’s lifelong friend and colleague, and the book contains more letters to and from the older composer than anyone else. But for all the outpourings of affection from Bernstein to his friend (“Aaron darling,” “Dearest Aaron,” “Dear Aaron Copland, Earth-Scorcher, Location-Adorner”), one senses a hint, now and then, of jealousy, and Bernstein the conductor is not above making edits and improvements to Copland’s works, sometimes only telling him later – but always telling him.

There are letters in this collection from celebrities such as Bette Davis, Farley Granger (a “two-night stand,” we’re led to believe), Louis Armstrong (“Dear Daddy Bernstein… You’re My Man and that’s for sure”) and Jackie Kennedy, the last touchingly articulate about Bernstein’s conducting of the Adagietto from Mahler’s fifth symphony at the Requiem Mass for her brother-in-law Bobby.

There are letters from composers – lots of (mostly minor) American composers, but also Stravinsky, Poulenc, Britten, Messiaen, Berio and Stockhausen. Stockhausen, in a very strange letter from 1959, tells Bernstein, “There is a secret relationship between your soul and Mozart’s soul, perhaps you know it.”

The undergraduate John Adams writes to reprimand Bernstein the composer for not being modern enough (“What about Boulez?”), to which Bernstein counters, reasonably enough, “I cannot conceive music (my own music) divorced from tonality. Whether this is good or bad is… irrelevant. The only meaningful thing is the truth of the creative act.” John Cage writes to request that Bernstein reconsider his plan to have the New York Philharmonic improvise alongside performances of music by Morton Feldman, Earle Brown and himself, explaining that their music is nothing to do with improvisation (Bernstein’s reply suggests he doesn’t understand). Elliott Carter writes a long, detailed letter about his Concerto for Orchestra, commissioned for the Philharmonic’s 125th anniversary in 1969, in which he carefully explains the metrical modulations in the piece. (Reviewing this volume in the Guardian, Philip Hensher wrote that Bernstein’s recording of this piece was “uncomprehending gibberish.” I don’t know where he got that from. Certainly not Carter, who told me in 1991 that, together with Boulez, Bernstein was the only one to have conducted his music well in the United States, and he singled out the Concerto for Orchestra.)

We can follow the progress of a number of Bernstein’s own compositions, among them On the Town, West Side Story and (in a rather parochial exchange of letters with Walter Hussey, Dean of Chichester) Chichester Psalms. As the book goes on, though, we sense Bernstein’s frustration. It’s mostly a lack of time, but it’s hard not to sense some dissatisfaction, perhaps even disappointment, with his own music: there are places in these letters where, I feel, the confidence hardens into bravado. And then his health keeps failing.

The personalities of artists often make those closest to them suffer, and when the personality is as big as Bernstein’s, there are bound to be casualties. Bernstein’s wife Felicia Montealegre tops the list. They loved each other, but Bernstein’s bisexuality was pursued as energetically as everything else and Felicia was stoical: “[I]t’s unbearably lonely around here without you. Kisses from the three of us and very special love from me.” When she dies in 1978, there is terrible guilt on Bernstein’s part.

Felicia’s letters form a kind of spine to this book. Even after her death, she remains a presence. Others whose letters recur include Bernstein’s childhood friend Sid Ramin, his piano teacher and later secretary Helen Coates, and his mother Jennie. There aren’t very many letters from Jennie, and it comes as something of a shock to discover, on the final page, that she is still there. She survived her son by two years, and the book’s penultimate letter, written after the announcement of Bernstein’s retirement from conducting, is from her.