Trouble at the OECD 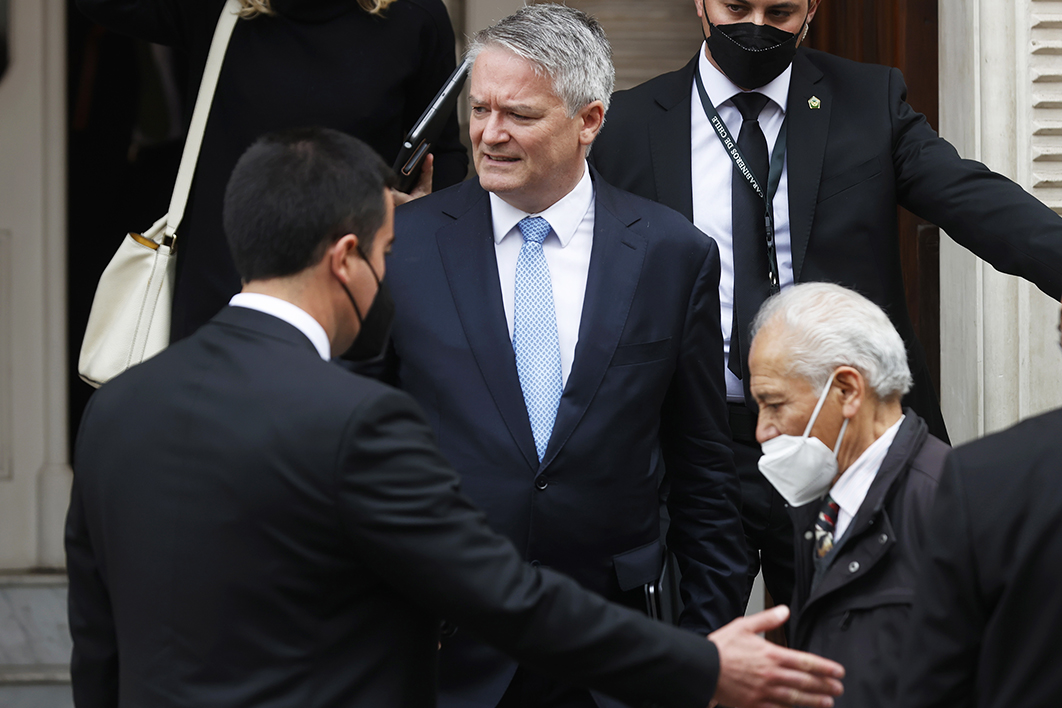 A few eyebrows were raised when Mathias Cormann was elected secretary-general of the Organisation for Economic Co-operation and Development early last year. Was it really appropriate, many asked, for the official economic think tank of developed countries — slogan: “Better policies for better lives” — to be headed by an ideological free marketeer and climate policy sceptic?

In the leadership election, held among the OECD’s thirty-seven member states, Cormann beat the Swedish former EU trade commissioner Cecilia Malmström, a centrist liberal. Campaigning for the job, Australia’s longest-serving finance minister made a point of toning down his economic opinions and record, particularly on climate change. Challenged by environmental organisations, he insisted that he was in favour of “an inclusive and future-focused recovery, including a green recovery” and “accelerating the transition to a lower emissions future.” Commentators assumed that in his new position, accountable to the wide range of economic policy views held by the OECD’s member governments, he would operate with a more plural and open economic outlook.

But recent events suggest that Cormann’s free-market instincts remain intact. Among his early reforms is a move to effectively shut down one of the OECD’s most innovative programs, the New Approaches to Economic Challenges, or NAEC, initiative.

NAEC was established in 2012 by the previous secretary-general, former foreign and finance minister of Mexico Angel Gurria, as a way of bringing new thinking into the institution after the global financial crisis. Gurria’s view, shared by many leading economists, was that orthodox economic thinking had helped precipitate the 2008 crash, and new economic ideas were required to get the world out of it. NAEC was to help the OECD lead that process.

The OECD has never been a source of what you might call radical economic thinking. Throughout its sixty-year history it has more or less dutifully followed the consensus of mainstream economics and economic policy. Originally broadly Keynesian, in line with the approach adopted by almost all developed economies in the 1960s and early 70s, it took the same free-market turn as they did in the late 1970s and 80s.

Often described as “neoliberalism” or the “Washington consensus,” the policy approach originally championed by Margaret Thatcher and Ronald Reagan — and then copied around the world — was based on the economic theories of Friedrich Hayek and Milton Friedman. They saw “free” (relatively unregulated) markets as not just the best means of generating economic prosperity but also the guarantor of political liberty.

Neoliberals wanted a smaller state, with lower taxes, privatisation of nationalised industries and public services, less government regulation and greater freedom for enterprise, unencumbered by trade unions. The OECD joined its fellow international economic institutions, the International Monetary Fund and the World Bank, in proffering such policy advice to governments throughout the 1980s and 90s.

For its critics, neoliberalism achieved its apotheosis in 2008, when the “efficient markets theory” — the idea that well-informed financial markets would always generate optimal outcomes — took something of a beating. Alan Greenspan, former chairman of the US Federal Reserve and neoliberal high priest, famously admitted to Congress that the theory had a “flaw.”

Yet neoliberal policy prescriptions had not yet been exhausted. Reacting to the global economic slump and the huge increase in government borrowing to which bank bailouts had led, many governments opted for “austerity,” slashing public expenditure and raising taxes in order to balance the books and reduce public debt. With interest rates reduced to near zero, central banks flooded the financial sector with printed money under a program of “quantitative easing.”

It was what the neoliberals had prescribed; but it merely succeeded — as the Keynesians predicted — in slowing economic recoveries and exacerbating wealth inequality, as asset values inflated far above wages.

In 2010–12 the OECD took the neoliberal position, praising Greece’s austerity program, which almost brought the country to its knees, and prioritising deficit reduction and public spending cuts in its advice to governments. As the decade developed, along with mainstream economists everywhere, the OECD puzzled over stagnant productivity, and why economic growth remained so weak for so long. It began to worry about rising inequality but struggled to relate this to quantitative easing and over-flexible labour markets. It did advocate taxing carbon to tackle climate change, but such taxes were never high enough to make a significant dent in emissions.

It was in this intellectual and policy context that Gurria launched NAEC. He was not sure precisely what those “new approaches” should be, but he knew that something better was required. The OECD’s member states agreed, providing the new program with a small but significant budget and encouraging its outreach to some of the world’s leading economists.

The result has been a decade of fruitful research, analysis and events, seeking to bring new economic thinking not just to the OECD’s own policy departments but also to the wider international community. Economists contributing to NAEC’s seminars, conferences and publications have included Nobel Prize winners Joseph Stiglitz, Esther Duflo, James Heckman, Angus Deaton and Robert Shiller, along with other world-leading figures such as Mariana Mazzucato, Thomas Piketty and Adam Tooze.

NAEC has focused on some of the key problems facing the world in the post-crash period, including reform of the financial sector, climate change and economic resilience after Covid. It has brought the relatively new field of complexity economics — which sees the economy as a complex, adaptive system rather than a self-balancing mechanism — to mainstream policymakers, and explored whether policymakers should now be seeking to go “beyond economic growth” to achieve environmental sustainability, reduced inequality and greater wellbeing.

NAEC has not fundamentally changed the OECD’s economic approach. The Paris-based institution employs hundreds of economists whose views were not going to change overnight, and most of its member governments wish to continue following largely orthodox economic prescriptions. But as Gurria wanted, it has provided a space for new thinking to be developed and debated, and some of this has been taken up both within the OECD and beyond it.

Cormann, it appears, is not impressed. He has reduced NAEC to a series of internal seminars for country delegates, ending its association with external economists and policymakers. In May he ordered a NAEC seminar on globalisation featuring a senior US senator and government official to be cancelled at the last minute. As a result of these changes, donors to the program have threatened to withdraw their support.

Now a group of twenty-six economists who have spoken at NAEC events have written an open letter to Cormann expressing their alarm at its demise. Including Stiglitz, Mazzucato and Tooze, the group originally wrote privately to Cormann in January praising NAEC’s work and asking him to maintain it. Cormann didn’t reply, and so the group has gone public with its concern.

In their letter the group notes that new forms of economic analysis and policy are needed more than ever, given the multiple crises currently facing the world. Many OECD countries are now heading for a period of “stagflation” — simultaneous inflation and recession — while many low-income ones are about to run into another debt crisis. What the economists call the “existential” challenge of climate change needs to be confronted urgently. In these circumstances, they say, it is important that an organisation providing advice to governments, like the OECD, “is at the forefront, not just of the present orthodoxy, but of competing views, theoretical frameworks and policy approaches.”

Throughout the history of economics and economic policy, the economists note, orthodox economic frameworks and policies have often been superseded as the empirical evidence changes and rival theories come to be more convincing. “This to and fro between received economic ideas and new ones is an important part of how intellectual and practical progress is made,” they argue. So it is not just the OECD, they conclude, but the wider international economic policy community that would benefit from NAEC continuing. They end their letter by offering to help Cormann and his staff in developing a new work program for NAEC.

No response has been received so far from Cormann or the OECD. •

Former senior OECD official Kumiharu Shigehara responds to Michael Jacobs’s observations about the OECD orthodoxy in the 1980s and 90s:

It is not true to say that the OECD’s advice followed that of the International Monetary Fund and the World Bank throughout the 1990s, at least when I was OECD chief economist from May 1992 to May 1997 and a deputy secretary-general from May 1997 to the autumn of 1999. I strengthened the OECD Economics Department’s work on inequality and, unlike the IMF and the World Bank, I spoke against too hasty liberalisation of international capital movements in emerging market economies, at an IMF seminar chaired by Michel Camdessus, then IMF managing director, and more openly at a number of other international gatherings and conferences.

My recollection is supported by an article, “Don’t Blame the Victims of Asia’s Crisis,” by Anthony Rowley, a reporter for the Business Times in Singapore, who wrote: “It is instructive that a Japanese national [Mr Shigehara] writing from Paris [the OECD offices in Europe] should be able to analyse the situation with such clarity. It seems that the ideological miasma in which Washington-based institutions such as the IMF and the World Bank have become entrapped, by virtue of their proximity, to the US administration and Congress, render such clear thinking impossible on their part. They dare not blame the system of unthinking trade, investment and capital market liberalisation to which they have co-opted, so they blame its victims.”

Michael Jacobs, Inside Story’s global climate correspondent, is Professor of Political Economy at the University of Sheffield. He is a co-signatory to the economists’ open letter.