Just weeks before his meeting with Kim Jong-un, Donald Trump has pulled the United States out of the Iran nuclear agreement. What is likely to happen next? 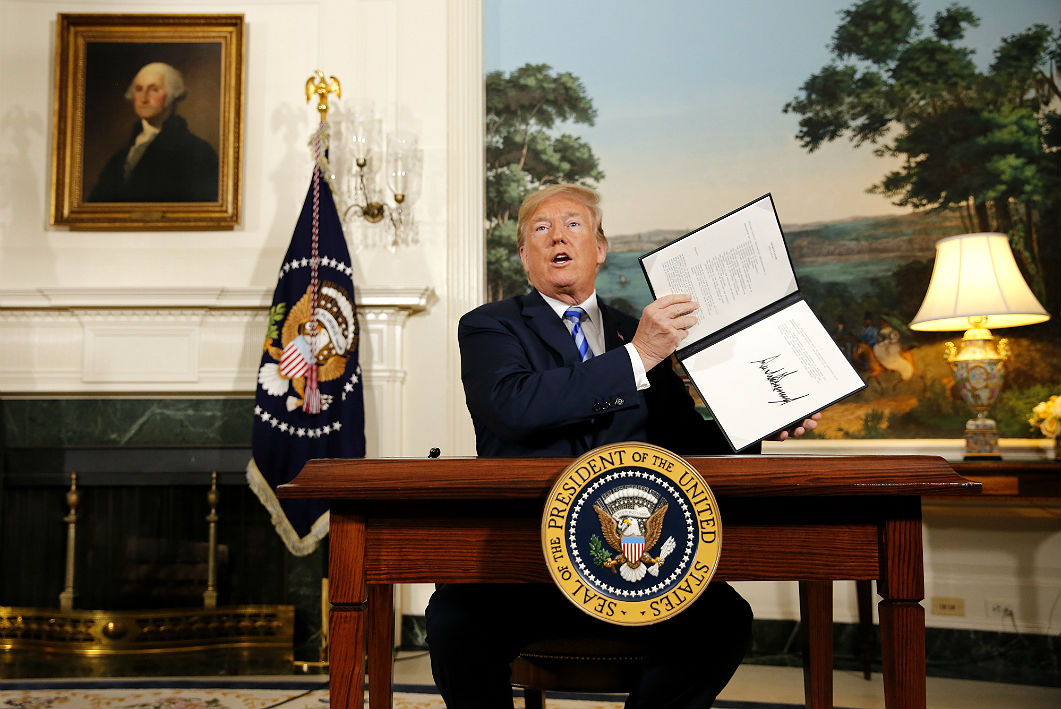 The United States is juggling two hugely important nuclear proliferation crises simultaneously. While Donald Trump angles for a deal with North Korea’s leader Kim Jong-un, he has fulfilled a campaign promise to “terminate” an agreement for containing Iran’s nuclear ambitions. Both flashpoints create enormous challenges, and the price of failure is high.

Australia rarely diverges from Washington on sensitive strategic issues, but in this case we firmly sided with those calling on the US president to stick with the Iran deal. Foreign minister Julie Bishop is reported to have told the US administration that its attempt to stop North Korea’s nuclear program would lose credibility if it overturned the UN Security Council–backed Iran deal. “The United States no longer makes empty threats,” President Trump responded in his 8 May statement:

When I make promises, I keep them. In fact, at this very moment, Secretary Pompeo is on his way to North Korea in preparation for my upcoming meeting with Kim Jong-un. Plans are being made. Relationships are building. Hopefully, a deal will happen and, with the help of China, South Korea, and Japan, a future of great prosperity and security can be achieved for everyone.

The message to North Korea is that Washington will stand by its undertakings, regardless of the decision on Iran. But that offers no assurance that Trump’s successor will stick to any deal he concludes — just as happened, it could be argued, to previous US deals with Pyongyang.

According to President Trump, the deal to curb Iran’s nuclear program was “one of the worst and most one-sided transactions the United States has ever entered into,” so this week’s announcement shouldn’t have come as a surprise. The White House statement said that the agreement had “failed to protect America’s national security interests” and that, accordingly, the United States would be withdrawing and reimposing sanctions.

The president can argue that he is simply implementing a campaign commitment. But this administration has been very selective about which pledges it has followed through with, and mainstream US political and expert opinion seemed to favour honouring the Obama-era deal. Some of the president’s closest foreign allies also appealed to him not to abandon the deal, most recently and publicly the French president during a state visit to Washington early this month. Just days later came a last-minute appeal by Britain’s foreign secretary, Boris Johnson, who argued that it was “right to see the flaws in the deal” but that they could be fixed.

In the Asia-Pacific region, too, US allies Japan and South Korea urged the United States to stay the course. Like Australia, they argued that the credibility of American commitments was at stake and expressed concern about the lessons that North Korea would draw.

The 2015 deal, formally known as the Joint Comprehensive Plan of Action, or JCPOA, was designed to ensure that Iran’s nuclear program would be exclusively peaceful. It was brokered by the Obama administration but involves all five permanent members of the Security Council — China, France, Russia, Britain and the United States — as well as Germany and the European Union. Negotiated over several years, it exchanged limitations on Iran’s nuclear program for an easing of sanctions.

The provisions of the deal are complex. It permits Iran to continue specified nuclear activities but bans or limits others. Adherence has been guaranteed by the most intrusive international verification regime implemented anywhere in the world. During 2017, the UN nuclear watchdog, the International Atomic Energy Agency, invested 3000 days of inspection in Iran and declared the country to be essentially compliant.

The Trump administration says that it doubts the verification measures will contain Iran’s nuclear program in the longer term. More fundamentally, it has condemned the agreement for failing to deal with Iran’s other “malign” behaviours. Developing long-range ballistic missiles, supporting terrorism and suppressing its own people are just a few items from the lengthy list offered in the White House statement.

The key question now is whether the JCPOA is viable without the United States. The other parties have had time to reflect on this and clearly want to try to salvage the deal. Much will depend on how far the United States will press its sanctions: if Boeing sales to Iran are banned, for instance, will Europe be able to sell Airbus aircraft with US components? The scope for new trade tensions and further stresses on the transatlantic alliance is clear.

The immediate response from Iran also appears to be one of hope that the deal can survive. But much will depend on Iran’s friends, Russia and China. Russia, in particular, will no doubt see a great opportunity to gain from the US decision.

No country has an interest in allowing a restart of the Iranian nuclear weapons program or the regional proliferation cascade it would undoubtedly generate. But, as Boris Johnson remarked, “Plan B does not seem, to me, to be particularly well developed at this stage.” What we do know from Trump’s statement is that the reapplication of sanctions is designed to apply maximum pressure on Iran to return to the table and negotiate a better deal. “As we exit the Iran deal,” it reads, “we will be working with our allies to find a real, comprehensive, and lasting solution to the Iranian nuclear threat.”

The statement was notably free of military threats. But Trump’s crediting of Israel with providing the “definitive proof” of Iran’s nuclear weapons ambitions will only aggravate tensions in the region, increase the risk of an Iranian breakout, and ultimately raise the prospect of the use of force.

More broadly, the decision can only be harmful to global non-proliferation efforts. A UN Security Council–blessed “success story” is severely jeopardised. The International Atomic Energy Agency, in finding no material fault with Iran’s adherence to the JCPOA, will suffer reputational damage from a seeming vote of no confidence from the United States. This potentially weakens the Agency’s hand in dealing with its existing global suite of verification demands, as well as in taking up its potentially huge role in any Korean Peninsula verification arrangement.

For Australia and the region, it needs be underlined that Iran is not North Korea. North Korea already has nuclear weapons and the means of their delivery, and that poses an immediate and direct threat to mainland United States. More generally, the domestic US pressures will be very different. The JCPOA was always strongly opposed in some quarters in Washington, fanned by the intense opposition of Israel. Americans are likely to be less divided on a North Korean deal, though the acute sensitivities in South Korea and Japan mean that the Trump administration will face major alliance management issues.

Given the fate of previous agreements on the Korean Peninsula, and given what has happened to the JCPOA, we can assume that Pyongyang will be looking for much greater assurance than that offered under previous arrangements — matching the very high standards the United States will necessarily demand of North Korea.

While the JCPOA introduced groundbreaking advances in intrusive verification, we can expect any Korean settlement to enter significantly more tracts of uncharted territory, with high costs. And if there is a simple moral to the Iran story it is that the United States will not accept a resolution of the North Korean nuclear issue without addressing missiles, proliferation activity, human rights and even social development.

This could be a massive grand bargain with a big price tag — and regional allies and others will assuredly be called on to contribute generously. Australia would do well to decide what it would like to offer, and most benefit from, rather than waiting — as we usually do — until we receive a request that suits the interests of others. •

John Tilemann is a former Australian diplomat and international civil servant. He is currently a member and Research Director of the Asia-Pacific Leadership Network for Nuclear Non-Proliferation and Disarmament, based at the Australian National University.

A high-stakes budget with a perplexing message

Why has the government chosen to fight the next election on weak ground? 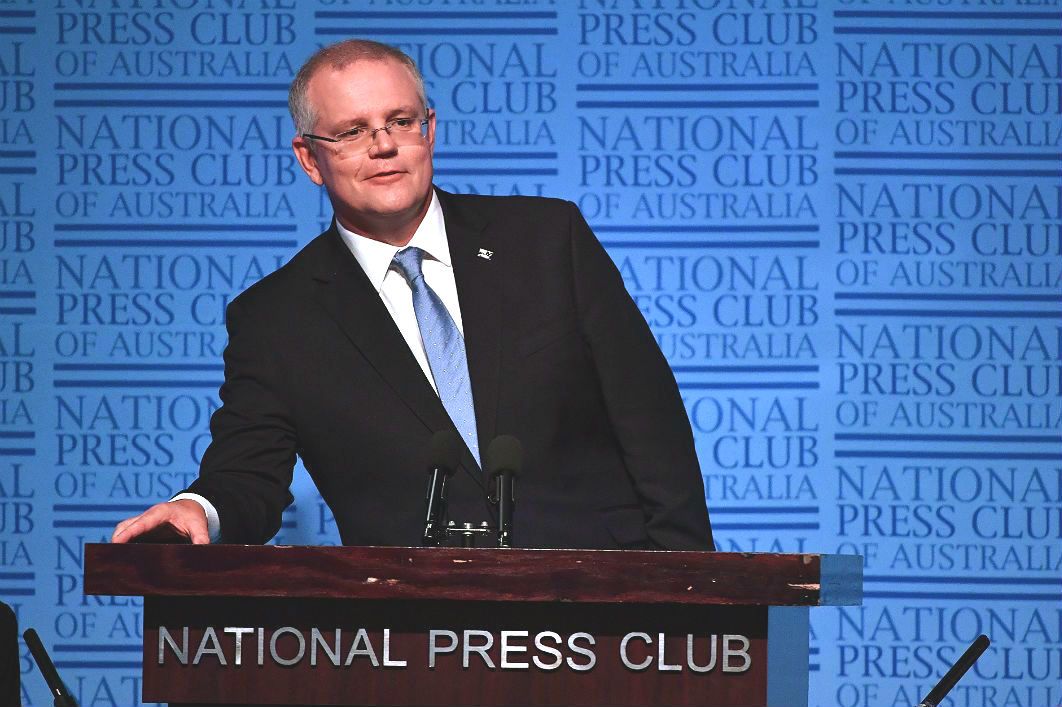