Red America and Blue America have become much more than clichés The two Americas. It’s a cliché — right and left, red states and blue states — but at times even clichés ring true. As they did on Saturday morning in Philadelphia, when the two Americas were on full display. In the city centre, news that the election had been called for Joe Biden sent people racing into the streets, where a spontaneous dance party erupted, replete with bright orange hockey mascots, boomboxes and omnipresent face masks. (The pandemic still rages, indifferent to the city’s mood.) YG and Nipsey Hussle’s song “FDT” (“F* Donald Trump”) became the day’s unofficial anthem as the celebrations spooled out into the unseasonably warm November evening.

Across town, the other America was taking its stand at Four Seasons Total Landscaping, a lawn centre alongside Fantasy Island Book Store, a purveyor of sex toys and erotica, and opposite the Delaware Valley Cremation Center. The industrial park served as the backdrop for a press conference held by Donald Trump’s personal lawyer, Rudy Giuliani, who had brought along a stack of specious claims about voter fraud. In the middle of the event someone interrupted to tell him that the election had been called for Biden. Giuliani waved the news away. “Don’t be ridiculous. Networks don’t get to decide elections. Courts do.”

It was an alarming claim — courts don’t decide elections in the United States, with one notable exception — but by the end of the weekend it had become an article of faith on the right. The president has refused to concede, and conservative media outlets and Republican politicians have, with few exceptions, lined up behind him. On talk radio, hosts like Rush Limbaugh insist that Trump won the election and Democrats have stolen it. His callers agree.

And here’s where the two Americas stop being a cliché and start to become an existential crisis. With loyalty to Trump superseding loyalty to democracy, the right is turning the country’s last scrap of common ground into a fatal fault line.

Few Americans are surprised that Donald Trump has refused to acknowledge he lost the election. After all, back in the 2016 campaign he said Americans would have to wait and see whether he would concede, a waiting game delayed four years by his unexpected victory. It’s easy to dismiss this as Trumpian bluster, a spray of lies and conspiracies to conceal that he has no recourse for a lost election.

It’s also easy to dismiss the calls for lawsuits and recounts as just another grift. The Trump campaign flooded supporters’ inboxes with fundraising calls for the “Official Election Defense Fund,” ostensibly created to raise money for whatever legal battles ensue. But squint at the fine print and you’ll see that 60 per cent of the money goes not to a legal fund but to paying off the Trump campaign’s debt. One more con as he walks out the door.

But don’t write this off as an ego trip or a shell game. This is a coup attempt. As Ezra Klein wrote in Vox, while Trump’s efforts seem laughably ineffective, they have serious consequences. “What Trump is trying to form is something akin to an autocracy-in-exile, an alternative America in which he is the rightful leader, and he — and the public he claims to represent — has been robbed of power by corrupt elites.”

That is precisely the argument that you’ll hear in the prime-time hours on Fox News and in the wall-to-wall right-wing radio broadcasts that blanket the United States. “We all believe that Donald Trump won this election. We all believe that he won it handily,” Rush Limbaugh told his audience on Monday. “In Democrat cities, they purposely were holding back counting the early voting and mail-in votes in order to know how many they would need to find in order to win. There’s no other explanation for this.” (There is an alternative explanation, one rooted in evidence: Republicans blocked the counting of early votes in certain states like Pennsylvania, resulting in the delayed counting that followed.)

But this conspiracy is not being contained to just right-wing media and the Trump team. As they have throughout the Trump presidency, Republican leaders have, by and large, fallen in line. House minority leader Kevin McCarthy went on Fox News on Thursday and declared, “President Trump has won this election.” Senator Lindsey Graham, who habitually follows wherever Trump leads, told Fox News, “If Republicans don’t challenge and change the US election system, there will never be another Republican president elected again” — a dark intimation of fraud and conspiracy.

The myth of a stolen election is already beginning to crystallise into a new article of faith for the American right. And it is already being teed up to justify all sorts of anti-democratic behaviour, including a new round of voter suppression aimed at preventing methods like mail-in voting that allowed a record number of Americans to participate in this year’s election despite the pandemic. Even as he was warning of a permanent Democratic hold on the presidency, Graham also pointed to a solution: “From a Republican point of view, mail-in balloting is a nightmare for us.” End mail-in voting to suppress the Democratic vote and the Republicans — who have lost the popular vote in seven of the last eight presidential elections — may be able to eke out a few more wins in the electoral college.

That’s the path the right is headed down — indeed, the path they’ve been on for at least a decade now. The arrival of Donald Trump accelerated and metastasised the anti-democratic trends in the Republican Party, but they’ll continue long after he’s gone.

In some ways, the United States had a lucky near miss. Trump turned out to be a lazy autocrat. The next few months will likely follow a predictable script. “No one seriously thinks the results will change,” a Republican official told the Washington Post, downplaying Trump’s refusal to concede. “He went golfing this weekend. It’s not like he’s plotting how to prevent Joe Biden from taking power on January 20. He’s tweeting about filing some lawsuits, those lawsuits will fail, then he’ll tweet some more about how the election was stolen, and then he’ll leave.” Yet even a lazy autocrat can inflict serious damage on democratic systems — especially when he has one of the two Americas solidly behind him. •

What needs to happen during Joe Biden and Kamala Harris’s journey from win to White House? 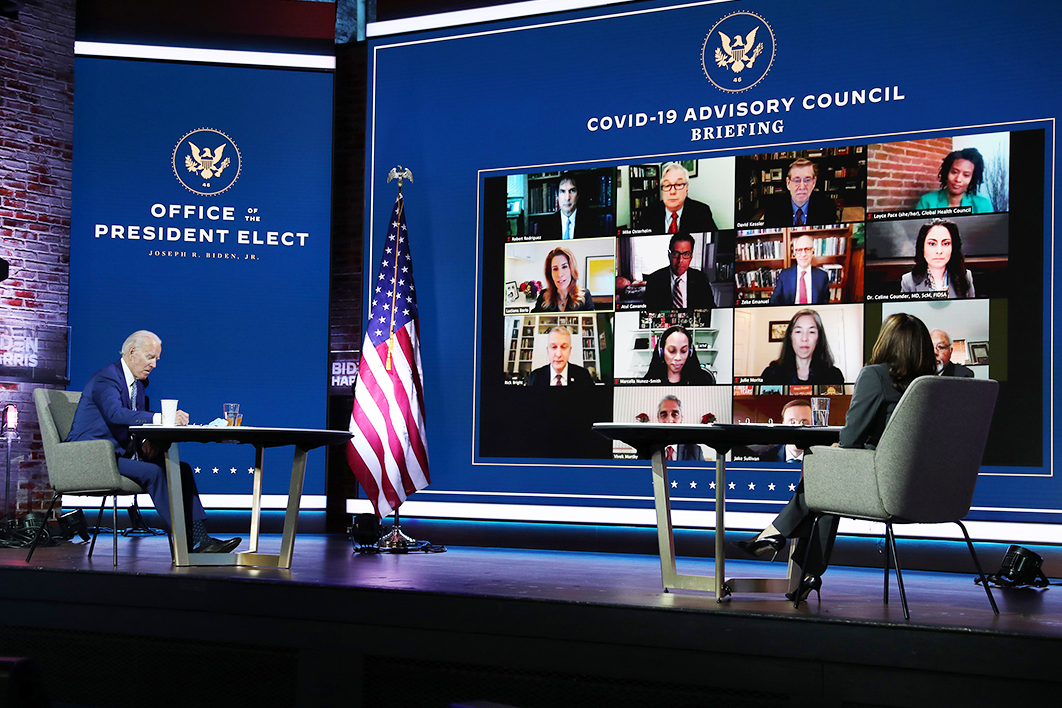