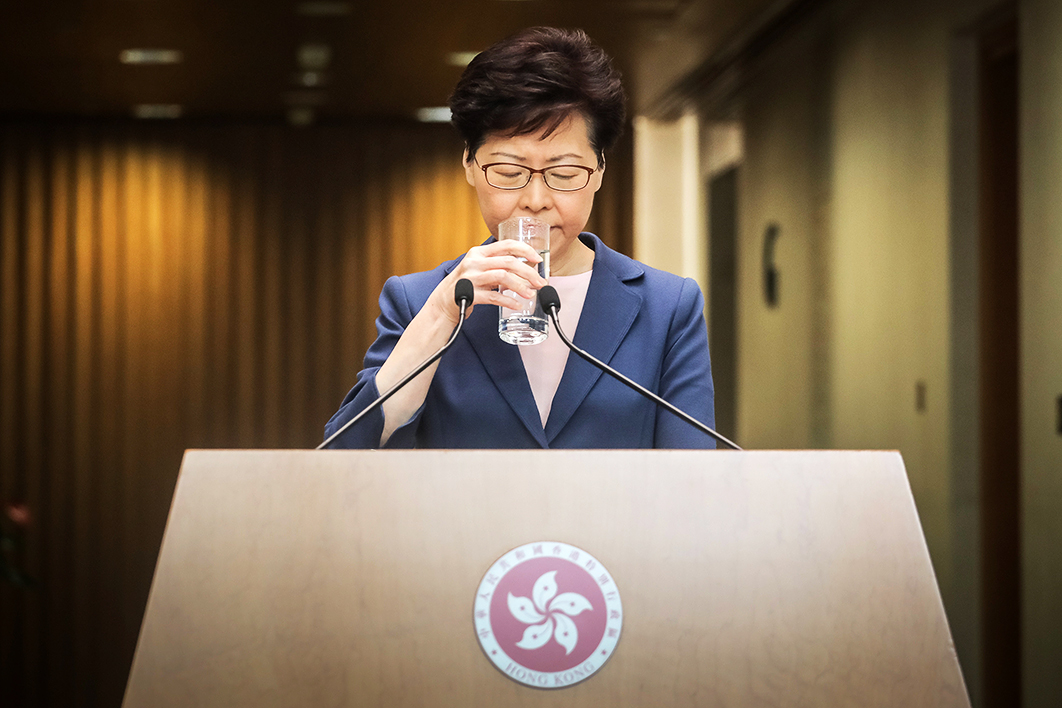 Like the rest of the world, Chinese Australians have watched this month’s protests in Hong Kong with admiration tinged by pessimism about how it will all end. “Friends in business have been seeing this coming for a long time,” says Jocelyn Chey, who was Australia’s consul-general in Hong Kong just before British handover to China in 1997 and is now a visiting professor at the University of Sydney. “They are gloomy, writing it off, seeing it becoming like Shanghai.”

This week’s backdown by the territory’s Beijing-approved chief executive, Carrie Lam, has at least alleviated fears that Hong Kong was heading for a Tiananmen-style crackdown by the People’s Liberation Army forces, which have been stationed in the former British garrison for external defence purposes since the handover.

As massive demonstrations continued, involving up to two million of Hong Kong’s 7.5 million people at any one time, and with young protesters breaking into the Legislative Council to daub slogans on its walls and wave the British flag, the PLA held well-publicised exercises on dealing with civil unrest. Beijing had a taskforce of officials closely monitoring events from just across the border in Shenzhen.

Lam says the contentious bill to allow extradition to mainland China is now “dead” and concedes that the Hong Kong government’s handling of the issue has been a “complete failure.” But she has repeatedly refused to formally withdraw the bill, and has rejected calls for her proposed inquiry into the protests, and the police response, to be held by an independent commission. She also refuses to withdraw official descriptions of protests as “riots” or give amnesty to those arrested.

Nor does Lam show any signs of acceding to demands for her own resignation, just two years into her five-year term. No doubt she hopes that protests will steadily dissipate. But her fate is not entirely up to her. She has failed to deliver for Beijing, which sees Hong Kong as a haven for fugitives and critics, and she has also lost whatever confidence she had among the Hong Kong public. Installed in 2017 by a 1194-person panel vetted for “patriotic spirit” by Beijing, she is essentially there at the Chinese leadership’s pleasure.

More broadly, the question of how Beijing will react to this popular challenge, and how far Hong Kong’s activists can push it, is still unanswered. How the tensions play out will have deep strategic consequences for countries including Australia.

Just twenty-two years into the half-century “one country, two systems” agreement, Hong Kong’s autonomy is under severe strain. Not coincidentally, the erosion of the territory’s independence has quickened since the ascension of Xi Jinping to supreme power in China in early 2013.

A key proviso of the Sino-British transfer — that serious consideration be given to using a universal franchise to elect the chief executive from 2017 — was pushed aside. Chinese police have covertly snatched a critical publisher and a fugitive businessman from the territory. Transport links to the mainland have been expanded, including via a long sea bridge and a high-speed rail line to a terminal in Kowloon, where mainland immigration officials have an extraterritorial enclave.

Hong Kong is now grouped in a “Greater Bay Area” with nearby mainland industrial zones like Shenzhen and Zhuhai and the former Portuguese territory Macau. Authorities in Guangdong province say that the controversial “social credit” system, which uses facial-recognition technology to penalise citizens for infractions like late payment of bills and jaywalking, will be introduced in Hong Kong within three years.

All this is adding to perceptions that Hong Kong is at a turning point. Reports say inquiries about emigration have jumped. A tipping point might well arrive, with residents liquidating their assets while property prices are sky-high and moving their money, and themselves, offshore.

What is striking about the protest movements — ranging from the “umbrella” movement five years back to the latest anti-extradition demonstrations — is the utter alienation of Hong Kong’s young people from the present system, and their willingness to confront the official narratives of autonomy and consultation. This was vividly illustrated on Monday when Hong Kong pop star and democracy activist Denise Ho turned up at the UN Human Rights Council in Geneva to urge it to expel China.

The remedy proposed by activist groups and pro-democracy members of the Legislative Council is to move to a universal franchise for elections for both the chief executive and the legislature. Only half of the members of the latter are elected by popular vote, with the rest selected by various lobbies approved by the government.

Such a plan is unlikely to appeal to Xi Jinping, who has displayed deeply authoritarian instincts through his mass surveillance systems, enforced ideological orthodoxy, and attempted deculturation of the entire Uighur population of Xinjiang. Yet he, and any comrades brave enough to broach the subject, might consider how far the extradition exercise in Hong Kong has got Beijing.

Not only is the US Congress discussing targeted sanctions against Chinese and Hong Kong officials involved in weakening the territory’s autonomy, but Taiwan is even less likely to be brought into the Chinese fold through a similar one country, two systems deal. In fact, Taiwan is playing up the Hong Kong crisis for all it’s worth. “These two outposts of democracy share the same values, and our paths and destinies are closely linked,” its foreign minister Joseph Wu told a forum in Denmark last month. “We both stand on the front line against the expansion of authoritarianism.”

Hong Kong has boosted the prospects of Taiwanese president Tsai Ing-wen, a member of the independence-leaning Democratic Progressive Party, in her re-election run next January, while causing her likely rival, Han Kuo-yu, the populist mayor of Kaohsiung from the Kuomintang (Chinese Nationalist Party) to tone down his commitment to closer links with the mainland. The one country, two systems model would be applied to Taiwan “over my dead body,” he now says.

Support for Taiwan has correspondingly increased in conservative circles in the United States, Japan and Australia. The Trump administration has just approved a US$2.2 billion sale of tanks and missiles to the republic, and an even bigger sale of sixty-six advanced-model F-16 fighters is mooted. Taiwan’s armed forces chief has had a rare meeting with his US counterparts, and Tsai has been allowed to stop off in the United States on the way to visit four Caribbean states that still recognise Taiwan.

In Australia, the assumptions behind Canberra’s embrace of “one China” are weakening. The mainland and the island are not converging. The People’s Republic is growing even more totalitarian under Xi. Taiwan, once a military dictatorship, is a democracy heading for its seventh directly contested presidential elections and is now the most socially liberal place in the Chinese world, exemplified by its recent legalisation of same-sex marriage.

Visiting Honiara just after the Australian election, prime minister Scott Morrison was studiously neutral on the question of whether the Solomons government should shift its recognition from Taipei to Beijing. He did not go as far as Trump administration figures reportedly have in urging the Solomons to stick with Taipei, but his neutrality was a shift. “Time was when we advised the Pacific Islands countries to go with Beijing,” says a former high-ranking Australian diplomat.

Opposition to joining the United States in armed defence of Taiwan has been a touchstone among Australian critics of the US alliance. But how happy would these critics be to abandon Taiwan’s twenty-four million people — a population the same size as Australia’s — to a communist takeover, with all the detentions, re-education, trials and executions likely to follow?

The Hong Kong crisis has been closely followed by Australia’s 1.2 million people of Chinese descent, and has been too big to be ignored or played down by the local Chinese-language media, which are normally kept in line by Beijing propagandists through direct ownership or advertising flows.

According to the 2016 census, about 281,000 people — roughly a third of the Chinese-Australian community — speak Cantonese, the language of the region that takes in Hong Kong. The newspaper that most appeals to them, the local edition of the Sing Tao Daily — which uses the traditional characters taught in Hong Kong, Taiwan and Singapore rather than the simplified ones adopted by the People’s Republic — has been giving full and generally balanced reports on the protests.

While certain security hawks have questioned the loyalty of Chinese Australians in recent years and raised fears of a fifth column, a remarkable aspect of our latest election was the contest in Chisholm between a Hong Kong–born Liberal, Gladys Liu, and a Taiwan-born Labor candidate, Jennifer Yang. Relations with China figured not at all, with most attention going to issues like negative gearing, tax rates and franking credits.

Liu emerged the winner. In a statement on Facebook this month she implicitly contradicted the Beijing depiction of the protests as riots. “I am one of the many people who have been moved by the recent protest action in Hong Kong,” she said. “The significant number of people who have taken to the streets to voice their concerns demonstrates to the world the kind of passion and commitment that the people of Hong Kong have for the future of their city.” Might members of the Chinese diaspora prove to be more of a problem for the communists on the mainland than for their host countries? •