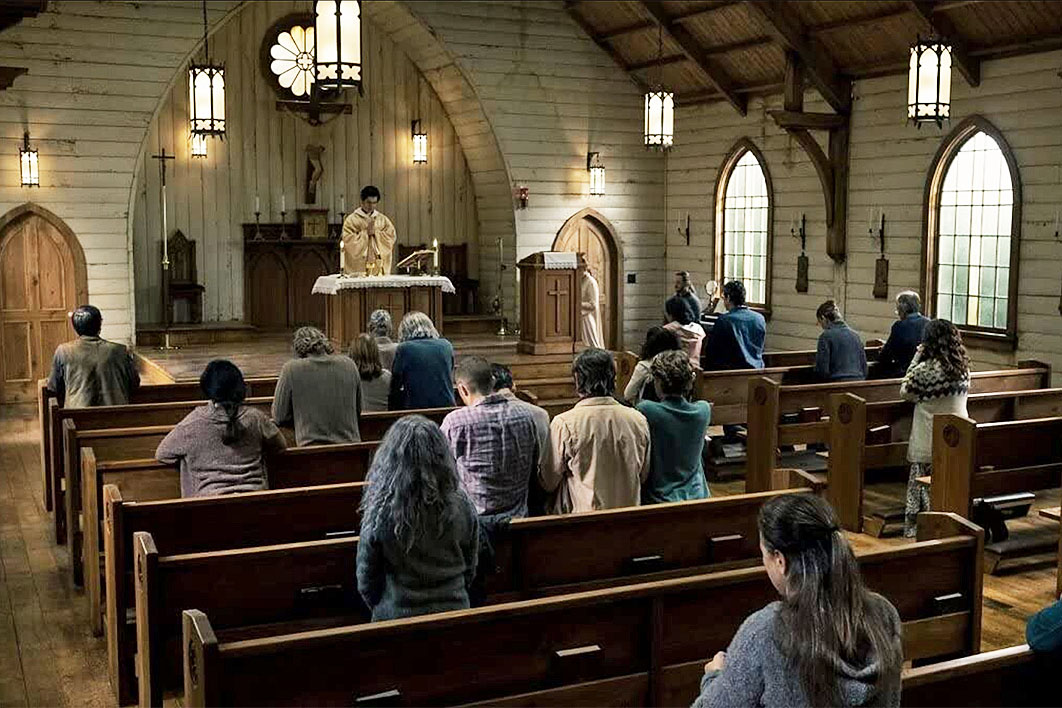 The newcomer: Hamish Linklater, as Father Paul, addresses his congregation in Midnight Mass.

Halloween is surely the strangest festival of the year, harking back to the ancient Gaelic feast of Samhain, when the boundary between the living and the dead was supposed to become permeable and ghosts returned to haunt the earth. After the festival was appropriated, adapted and renamed All Hallows’ Eve by the Church of Rome, followed by All Saints’ and All Souls’ Days, pagan ghouls and witches blended with saints and angels in the iconography.

The new six-part Netflix series Midnight Mass is set in the extended Christian festival of Lent and Easter, but plays on the duality of pagan and sacred in ways that resonate particularly well with the Halloween tradition. I usually click past series promising blood, gore, violence and horror themes in my routine trawls through Netflix. But this one kept popping up at the front of the menu, so I decided to give it a ten-minute trial. Less than a minute into its opening scene, it was clear this was far from generic.

An accident on a city bridge at night: the camera travels over a car — its side window smashed, steam rising from the engine — while paramedics perform CPR on a casualty lying on the road. A few metres away, the young driver sits on a wall, his face illuminated by the flashing lights of emergency vehicles. It’s as if this is all happening in slow motion, and for a while in silence, as a Neil Diamond ballad swells on the sound track.

At once realistically horrible and lyrically other-worldly, the atmosphere is reminiscent of David Lynch. Larger forces of destiny are converging on Riley Flynn (Zach Gilford), the young man responsible for the tragedy, as he sits mouthing the words of the Lord’s Prayer.

A few years later, a chastened Riley is released from prison and returns to his home on Crockett Island, where a remote, close-knit community is bound together by the church and its ageing priest, Monsignor Pruitt. Pruitt was scheduled to return on the same ferry after a trip to the Holy Land, but a much younger priest, Father Paul Hill (Hamish Linklater), unexpectedly steps ashore in his place.

Director and showrunner Mike Flanagan, who grew up in a small-island Catholic community and served as a chorister and altar boy, draws on a deep familiarity with the liturgy and with the feasts and symbolic rituals that dramatise the passage of time in a place where nothing much happens. With its plush costumes, stirring music, atmospheric lighting and mesmerising rhetorical display, the church itself is a form of theatre.

Flanagan has assembled some outstanding talent. Composers Andy Grush and Taylor Newton Stewart (the Newton Brothers) arrange traditional hymns, some sung in full as mass is celebrated, with Grush himself playing the role of the organist. Production designer Steve Arnold, whose credits include Mindhunter and House of Cards, has a way of creating spaces that never quite contain what goes on in them.

Hamish Linklater delivers the sermons with poetic virtuosity, building to crescendo in unnervingly syncopated rhythms. The son of legendary voice trainer Kristin Linklater, he made his reputation in Central Park Shakespeare productions, and brings a repertoire of technical strategies to his intensely demanding role. If you’re going to deliver fire and brimstone, it’s best to start quiet, and Linklater’s performance is bedded in a low-key, self-deprecating manner.

Father Paul, newcomer though he is, gets about the village with an uncanny instinct for getting to know people, and especially those who don’t want to be known — like Riley, who tries to avoid the traditional greeting at the church door and refuses communion, insisting that he is not in a state of grace.

Most people here bear scars. The mayor’s daughter, Leeza Scarborough, is paraplegic following a shooting accident. Local doctor Sarah Gunning grew up as an only child who never knew her father, and now cares for a mother suffering from rapidly advancing dementia. Erin Greene, the schoolteacher, has returned to her home on the island pregnant after a failed marriage. Sheriff Hassan, a devout Muslim, has retreated from life in the New York police department, where he suffered prejudice and punitive demotion.

Over seven hour-long episodes, the series takes time to explore these lives and the bonds that have grown between families and across the community as people try to help each other through their struggles. In this place of strong loyalties, moral principles are more than mere doctrinal notions.

Flanagan loves to indulge in prolonged takes, tracking characters as they walk the length of the village at dusk, engaged in quiet conversation, or gather on the beach at dawn to assess the damage wrought by a terrifying storm. As you would expect in a horror series, much of the drama happens at night. But here there is a fascination with shades of darkness, literal and metaphorical. The horror takes its time brewing, and when it does burst through it must contend with a bedrock of human solidarity.

Once the full blood-and-gore cracks open in episodes four and five, though, some of the effects are grossly out of keeping with the realism built up in previous episodes. It’s really not a spoiler to let on that, yes, we do get vampires, and reflective contact lenses to signal that someone has gone over to the dark side.

If you are tempted to give up at this point, don’t. Flanagan proceeds to redeem himself by ambitiously orchestrating the whole village in an enactment of the Good Friday Midnight Mass. As the candle-lit procession completes its tour of the village and fills the church, Father Paul enters in a gold chasuble.

From a scriptwriter’s point of view, it takes some nerve to set up a scene like this. What is the priest going to say? A great deal, actually, and it’s potent stuff, as holy and unholy as anything anyone ever heard in church. Don’t miss it. •

Books & Arts Too much, too soon Jane Goodall 4 October 2021 Do the makers of ABC TV’s Fires have enough critical distance from their subject?
Close

What exactly is up for negotiation at next week’s COP26 conference?

Can the gaps be bridged? Preparations for the COP26 conference continue in Glasgow. Iain Masterton/Alamy 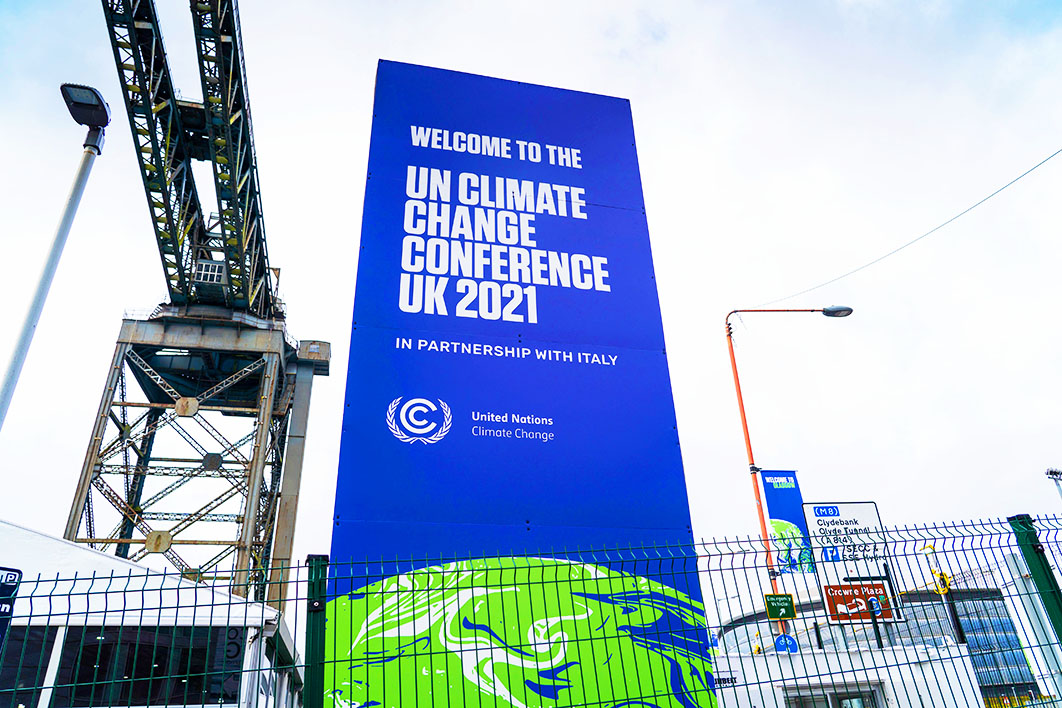 Can the gaps be bridged? Preparations for the COP26 conference continue in Glasgow. Iain Masterton/Alamy