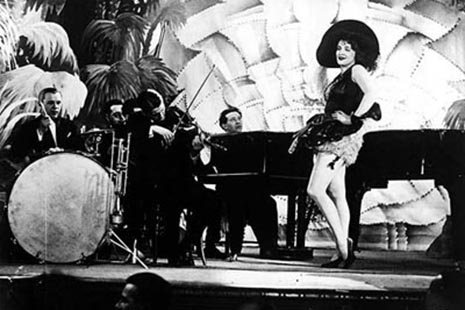 IT HAD been five and a half years since the German Jewish musician Stefan Weintraub and his jazz band, the Weintraub Syncopators, had fled Germany. So successful was the band that it had accompanied Marlene Dietrich in the sensational 1930 film The Blue Angel. At the end of its final performance in Berlin in February 1935 the band members left five empty chairs behind on stage to demonstrate that they had been silenced by the Nazis and were departing.

Now, in September 1940, Weintraub was pleading with Australian authorities to release him from internment, where he and other refugees were being held alongside committed Nazis as “enemy aliens.” In despair, having suffered accusations that he was a German spy, he asked: “What have I done that I must endure all this and that I find no place in the world where I am welcome?”

Weintraub would spend another year in internment before a military hearing concluded that there were no grounds for holding him. His musical career, though, was finished. The Musicians’ Union of Australia, which had played a role in having him interned, made sure that this foreign competitor could not revive his band. (At the time, non-unionists were prevented from performing and non-citizens were refused union membership.) Weintraub abandoned hopes of playing on. From 1942 until his death in Sydney in 1981 music was just a hobby and he earned his living as a mechanic. His band sank into obscurity.

The Syncopators’ story is recounted by Albrecht Dümling in his new book, Die Verschwundenen Musiker, published in Germany in November last year and to be translated into English. This impressive work of musical archaeology brings to the surface the lives of ninety-six “vanished musicians” who fled Nazism and settled in Australia. A few were famous artists who toured Australia and stayed, most notably the piano virtuoso Jascha Spivakowsky; others were lesser known or part-time musicians forced to leave Germany or Austria because they were Jewish, had anti-Nazi connections or played blacklisted music such as jazz. Many downplayed their musical talent when they applied to enter Australia, aware that Australian officials insisted on more practical skills. Only a minority of them were ever able to work as professional musicians in Australia.

Dümling has meticulously researched the hidden musical talents of this remarkable group. He follows their lives in great detail, assembling the facts from a vast range of primary sources, including interviews with the refugees and their descendants, personal files, shipping lists, correspondence, travel documents and applications for visas, employment and citizenship.

Many of the refugees were interned during the war, either from within Australia, like Stefan Weintraub, or among large groups sent to Australia from other parts of the British Empire. Some had been on the Andorra Star, bound for Canada, when it was sunk by a German torpedo on 2 July 1940 with 800 casualties; the survivors were promptly transferred to another ship with internees aboard, the Dunera, which sailed for Australia on 10 July 1940.

Nearly two thousand refugees were dispatched to Australia on the Dunera and initially sent to a complex of camps in Hay in rural New South Wales. Within two months, internees had established a theatre with stage lights contrived from empty jam and petrol tins. They performed musical comedies written on arrival in the camp: Hay Fever in camp 7 and Hay Days are Happy Days, to which 120 internees contributed in one way or another, in camp 8. The musicians’ improvisation skills were put to good use in a mock jazz band with internees mimicking instruments with their mouths. Ray Martin (the new name chosen by Kurt Kohn), who later became known in England and America for popular and film music, wrote ironic lyrics about internment in the outback heat: “Make your Hay Days your gay days / Yours is all the fun / Yours is all the sun.”

Later, the songs composed in Hay were worked into a show Snow White Joins Up, first performed at Christmas 1941 and revived at the University of Melbourne in March and April 1943. By 1943 most of the refugees had been released from internment to serve in the Labour Corps of the Australian Army because the British government had belatedly recognised their ill-treatment and the Australian government had mobilised all available manpower to shore up the war effort following the fall of Singapore in February 1942.

The revived Snow White show was updated so that Snow White and the Seven Dwarves also joined the Labour Corps. Another addition was the inclusion of a song first performed on the London stage in May 1940 by the refugee actor, Agnes Bernelle (born Bernauer), who settled in England and worked for British intelligence. The refugee musicians brought appreciation of the song to Australia. It evoked how a girl’s childhood dream of travel turned into the nightmare of being driven across the world in search of a home. Called “Die Zwanzigjährige” (“The Twenty Year Old”) it translates in part as: “I dreamed of travel as a child / Of adventures on the oceans wild / Now it is a house for which I long / And a city which I can call home.”

AFTER the war some of the refugee musicians did manage to achieve prominence in the Australian musical scene. Musica Viva Australia was established in 1945 by two of the refugee musicians: Richard Goldner, a virtuosic viola player who fled to Australia from Vienna in 1939 and Walter Dullo, who came to Australia from Berlin with his Jewish wife in 1937. Goldner was prevented from pursuing his musical career by obstruction from the Musicians’ Union of Australia and turned to trade in jewellery and leatherwear. It was through trade connections that he met Dullo, but their shared passion was music. The organisation they created is still running sixty-six years later.

Another of the Dümling’s subjects, George Dreyfus, broke new ground in Australian music. Dreyfus, who came to Australia in 1939 after escaping Berlin with other children, became Australia’s first successful freelance composer. He composed the popular theme music to the ABC television series Rush and innovative new music including his Sextet for Didgeridoo and Wind Quintet. He also penned “‘Larino’ Safe Haven,” named after the children’s home in Balwyn where he lived in Australia until his parents arrived.

And then there is the intriguing story of Hermann Schildberger, who came to Australia with the help of Dr Hermann Sänger, himself a Jewish refugee from Berlin. In 1936 Sänger had become the rabbi at the new Temple Beth Israel in Melbourne and in 1939 he sponsored Schildberger to become the Temple’s musical director. Schildberger had been a successful businessman and musical director of the Jewish reformist congregation in Berlin, where he modernised synagogue music. Between 1928 and 1932 he made more than a hundred records, using a pipe organ and choral singing to depart from the orthodox liturgy.

With its humble Hammond organ, Temple Beth Israel in Melbourne was a world away in terms of musical resources. Starting from scratch, Schildberger became a major contributor to the Australian musical scene over the next thirty-five years. He founded the New Melbourne String Orchestra in 1940, established philharmonic societies in Brighton (1943) and Camberwell (1944) and directed the Brighton Methodist Church Choir. He invited members of the Methodist choir to bolster the choral singing at the Temple Beth Israel. Ultimately he led the National Theatre Opera School. Schildberger died in 1974, but not before he had received a MBE for services to music and the Temple Beth Israel finally acquired a small pipe organ to replace the old Hammond.

ALBRECHT Dümling is probably best known as the curator of Degenerate Music, an important exhibition about Nazi propaganda in music. In The Vanished Musicians his approach is like that of a curator who brings neglected historical exhibits to light. He assembles an enormous corpus of facts to ensure that these lives are never again forgotten or ignored. The details – those empty chairs left by the Weintraub Syncopators or Hermann Schildberger’s creaky Hammond organ – are often tellling but the book also includes less illuminating details, including lists of ports at which refugee ships docked on the way to Australia. At times it reads more like a lexicon or reference work than a narrative history.

Dümling writes that the “history of the musicians who fled to Australia consists of many individual memories which have never been connected, pieces of a mosaic which have never been put together.” What does the complete picture give us over and above the array of retrieved biographies? Dümling is sceptical about any narrative building to a climax; the final section is not called a “conclusion” and ironically is titled as a fairy tale ending, “Happily ever after.” Nonetheless an overall storyline does emerge through the points of similarity and contrast between the various biographies.

Without Dümling’s research we wouldn’t know that there were nearly a hundred gifted musicians among the refugees from Nazism who came to Australia. Overwhelmingly they didn’t come by choice. They came to Australia because their preferred destination of America had been ruled out; by compulsion, as on the Dunera; or because, by chance, they had a contact, sponsor or even distant cousin in this country. Those who came on their own initiative faced imposing barriers, including strictly rationed landing permits and the requirement to have hundreds of pounds of landing money. Only a few of those who came became successful musicians in Australia, but many of them contributed in important, unobtrusive ways to the musical scene in Australia – in voluntary societies, through private tutoring and mentoring and in suburban and regional musical activities from Tasmania to Calgoolie. As Dümling writes, they made “hidden contributions to cultural diversity.”

Migration history is often written in terms of “waves,” within which everyone is assumed to share a broadly similar experience. The Vanished Musicians gives us a very different picture. There is an enormous variety among the ninety-six individuals’ experiences and the turning points in their lives were often accidental or surprising. Musica Viva was established in 1945 because Richard Goldner had funds from an unexpected government contract, happened on news of the murder of his musical mentor, Simon Pullmann, in Treblinka, and fortuitously met Walter Dullo. Herman Schildberger came to Australia because Hermann Sänger knew of him and was aware that he sought a place of refuge.

These refugee musicians were forced to compose their lives anew in Australia. For those used to making up music it must have seemed that this time they were improvising their very lives. Many changed their names. Some made reputations for themselves in music in Australia, others found new livelihoods. By showing us the challenges and the twists and turns they all experienced, Dümling makes “the vanished musicians” a compelling presence in the history of forced migration and the movement of refugees. •

Glenn Nicholls is the author of Deported: A History of Forced Departures from Australia (UNSW Press).