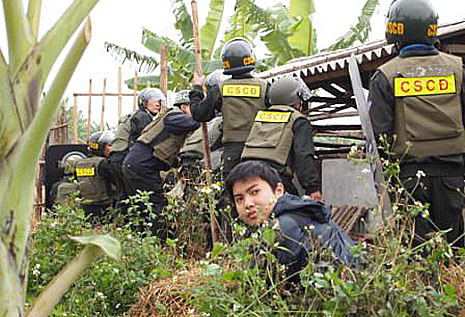 Near Haiphong city in early January this year, police attempting to evict a fish farmer named Doan Van Vuon were repulsed by pot shots from a bird rifle. The authorities brought in more than a hundred police and soldiers with tear gas and stun grenades to seize the property and flatten Vuon’s two-storey house with a bulldozer. They also demolished the home of Vuon’s brother, who was not listed for eviction, and unknown parties destroyed Vuon’s ponds and made away with the fish. Six police were injured and – despite the lack of any fatal violence – Vuon and three relatives were charged with murder.

What makes this confrontation unique is the national media coverage that almost unanimously supported Vuon and his family against the authorities. Vietnamese TV screened the chaotic, Keystone Cop–style behaviour of police. More than a dozen newspapers published eye-witness accounts, and bloggers began to dig into Vuon’s extended attempt to be heard in the courts. A Haiphong official was ridiculed for claiming that “the people vented their anger by demolishing Mr Vuon’s house.” Relentless interviewing and investigation by reporters exposed a host of other official lies and obfuscations.

Government censors seemed too stunned to block publication. The Communist Party remained silent. On 10 February, Prime Minister Nguyen Tan Dung finally instructed subordinates to report on who was responsible for mistakes in confiscation of Vuon’s land, who ordered the armed assault and according to what law, and who issued orders to destroy homes and ponds.

Doan Van Vuon’s clash with police has its origins in 1993, when he received a lease for 21 hectares of coastal wetland from the Tien Lang District People’s Committee and set about building the dykes, sluices and ponds necessary to raise fish and prawns. In 1997, Vuon obtained a further 19.3 hectares, and other pioneers followed his example. From 2005, however, farmers began to receive warnings that their land would be repossessed at the end of their 20-year leases, with no compensation for improvements. In 2009, four years prior to expiration of his lease, Vuon was ordered to surrender half of his land.

Vuon decided to contest the order in court, an unusual move in Vietnam. By this time fish farmers had formed an association to try to protect their interests, but no one else dared to take on the authorities legally. Vuon’s case was rejected by the Tien Lang district court, then the Haiphong city court. But a magistrate offered Vuon a deal whereby he would drop further court action in exchange for the Tien Lang committee extending his lease. Vuon took the offer, but late last year the committee ordered him to vacate the land forthwith. Local thugs threatened Vuon’s family and sabotaged several fish ponds.

Following the early January confrontation and public splash, reporters and bloggers uncovered considerable evidence of official malfeasance, extending at least as high as Haiphong city level. It was clear that some officials were trying to take advantage of property improvements to benefit themselves, for example by receiving “commissions” from new landholders. Meanwhile, journalists reported Vuon’s unsuccessful attempts to obtain a defense counsel of his choice. The wives of the accused proved very effective in defending their spouses in the press.

Newspaper editorials ask why the dispute in Tien Lang was allowed to fester for years without central government action. This slippage is a growing problem in Vietnam, with district and province officials often managing with impunity to evade or selectively interpret Hanoi’s laws and decrees. Previously the Communist Party hierarchy monitored compliance, but now local cadres have their own agendas as well. The National Assembly tends to respond to what is presented to it by the executive, rather than mounting its own investigations and solutions. The judiciary has always been the weakest link in Vietnam’s political system.

By early this month Vietnam’s mass media had moved on to other topics, occasionally publishing a story about bigger land disputes in neighbouring China as warning of what might happen at home. Prime Minister Dung complimented journalists on their role in the Tien Lang affair, but he also requested the Information Ministry and Party Propaganda Bureau to strengthen management of the press in order to “protect the Fatherland.” Bloggers continue to follow the fate of Doan Van Vuon and to mock the government’s preference for rapping the knuckles of guilty officials rather than turning them over to the courts for prosecution.

The issue won’t go away, however. Next year, a host of 20-year leases granted in 1993 come due nationwide. A junior member of the Resources and Environment Ministry told reporters that 1993 leases will be extended for another twenty years, but top party and state officials remain silent. Up until now district committees have called the shots, and they will resist any change. Mass lease extensions will offend those Party members who insist that state ownership of all land in the name of the people is vital to the future of socialism in Vietnam. Even non-party observers worry that routine lease extensions will increase concentration of wealth and power for big landholders at the expense of small farmers.

Later this year Vietnam’s National Assembly is scheduled to debate a new land law, perhaps to include a move from 20 years to 30 or 40 years for agricultural leases. Next year Vietnam is scheduled to engage in nationwide debate on revising the 1992 Constitution, with property clauses certain to attract attention. The blogosphere is already alive with constitutional analysis and proposed amendments. The Tien Lang affair has given the media and the public a new taste for uncensored coverage of sensitive issues. It will be hard for the party-state to put the genie back in the bottle. •

David G. Marr is an Emeritus Professor in the School of Culture, History & Language at the Australian National University. 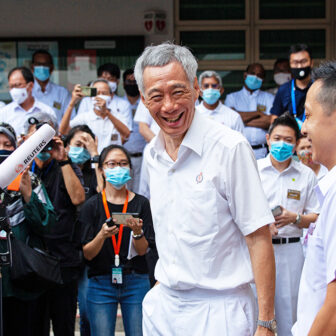