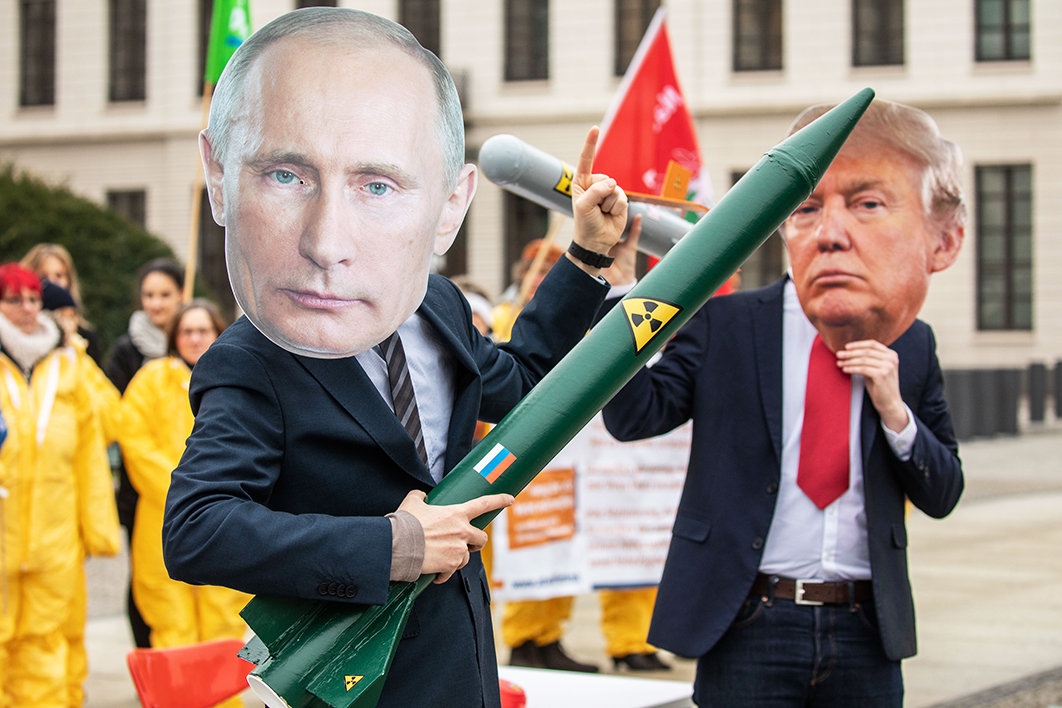 In the middle: German activists protesting in Berlin last Friday against the likely termination of the Intermediate-Range Nuclear Forces Treaty. Omer Messinger/PA

The 1987 Intermediate-Range Nuclear Forces, or INF, treaty was a triumph of good sense that made the world a safer place. It banned US and Soviet land-based missiles with ranges of between 500 and 5500 kilometres — a small fraction of the bloated arsenals of the period, but hugely important in symbolic terms. But now, just when the institutions of global order are most needed to mitigate a rise in the strategic temperature, Washington has announced its intention to abandon the agreement, and Russia has retaliated in kind.

The INF treaty’s symbolic importance dates back to the cold war manoeuvring of the postwar period. NATO had been established in 1949, tying together the United States and Western Europe to deter a Soviet invasion, and American troops had been based on the West German front line. They were followed by thousands of short-range “battlefield” nuclear weapons, designed to reassure Europeans that Washington could counter Moscow’s advantage in conventional forces. Not surprisingly, the weapons were controversial: they seemed likely to be used almost automatically against any fast-approaching Russian tank armies, and would devastate precisely the countries (like West Germany) they were supposed to protect.

The dilemma became stark in the late 1970s. NATO’s short-range nuclear forces were to be modernised with the “enhanced radiation warhead” — in other words, the neutron bomb. Outrage followed the media’s reporting of the plan. Moscow amped up its anti-NATO propaganda campaign, and in the West the peace movement mushroomed. “The shorter the range, the deader the Germans,” became a rallying cry. The Western alliance buckled under political pressure and abandoned the new warhead. NATO had shot itself in the foot; the Russians were delighted.

NATO revisited the issue in the early 1980s, aiming to repair the damage done to its credibility. This time the new weapons would be longer-range, capable of hitting Russia. They would provide a more powerful deterrent and be seen, it was hoped, as less dangerous to allied populations. NATO also fine-tuned the rationale, saying it needed to counter a new generation of Soviet weapons, especially the SS-20, a nuclear ballistic missile capable of reaching any location in Europe. More than 400 SS-20s were built, each carrying three warheads with the explosive equivalent of ten Hiroshima bombs. They seemed designed to intimidate Europe. The counter was the US nuclear-armed, Ground-Launched Cruise Missile, or GLCM, and the Pershing II missile, which were both deployed to Europe.

Again, there was an uproar, and a good deal of anxiety. This was an arms race many feared would end in a third world war. While the new missiles were packaged as symbols of NATO solidarity, they were formidable weapons integrated into serious plans for operations. Combined with their Soviet equivalents, they could easily kill a hundred million Europeans and lay waste to the continent from Portugal to the Ural Mountains.

Then, quite quickly, everything changed.

President Ronald Reagan proposed a “zero option”: why couldn’t NATO and Moscow simply agree to get rid of this class of weapon? Deterrence would remain in place, but the dangerous momentum would be reversed.

Reagan was widely ridiculed. The peace movement was convinced he was a warmonger and refused to take his idea at face value. Some conservatives believed he was strategically illiterate. The Soviet old guard refused to budge; the idea of giving up their newest and best weapons struck them as ludicrous.

The circuit-breaker was a new Soviet leader. Mikhail Gorbachev viewed the cold war as ruinously expensive, politically silly and reckless. He accepted Reagan’s offer, giving us the INF treaty. All the SS-20s, GLCMs and Pershing IIs were scrapped. It was a big step towards ending the cold war.

So why is the treaty being torn up? First and foremost, Vladimir Putin is no Gorbachev. He is resentful of NATO expansion, is prone to playing the nationalist card, and pushes his luck. He allowed (perhaps encouraged) the Russian military–industrial complex to proceed with a new missile that violates the treaty. Add to that a lack of transparency in Russia’s large arsenal of shorter-range nuclear weapons, and Putin’s provocations in Ukraine, and it’s hard to take him at his word.

In addition, Donald Trump seems uninterested in the implications of either abandoning the treaty or working to repair it. Playing tough, sidelining the concerns of allies and liberals, keeping issues simple and regurgitating slogans have become a program. He apparently views politics as a game of poker: convince the other side you can push harder, for longer, and can keep raising the stakes, and all will be well. Sometimes it’s difficult to tell whether his blustering is a considered strategy or simply a character fault.

Another factor is the passage of time. The treaty reflected a moment in history. It was bilateral — restricted to Washington and Moscow — with each side showing good faith. Today’s world isn’t so simple. Compared with 1987, trust is in short supply. And China is now more significant in Russian and American strategic thinking.

Lastly, there’s John Bolton. Trump’s national security advisor is considered smart but dogmatic. He’s been a pugnacious objector to arms control for decades. Many global security experts view him as the Prince of Darkness and suggest his opposition is almost pathological. He probably sees himself more like Dirty Harry: clear-eyed, making the tough but necessary calls that spineless, naive idealists run away from. For Bolton, there’s no merit in negotiation with dubious governments.

To a degree, he has a point. Bad arms control that discredits the brand and favours cheaters is worse than no arms control. But he takes the point to extremes. Bolton seems to relish ripping up diplomatic deals rather than fixing them.

The implications of the treaty’s end look grim. Three suggest themselves.

First, the scene has been set to abandon the 2010 New Strategic Arms Reduction Treaty, or New START, for intercontinental-range missiles. Unlike the INF deal, this doesn’t have to be melodramatically ditched; it can simply be allowed to lapse in 2021.

Second, the door has been opened to a new round of proliferation. Russia has reportedly said it will respond to US withdrawal with new missiles. Trump’s stance means the Russians have been given a legal way to build new intermediate-range missiles while blaming Washington for the treaty failure. The United States had already begun a nuclear modernisation program costed at US$490 billion over ten years; scrapping the INF treaty could see this ramped up. But there’s also the awkward fact that few, if any, countries will want to host the American missiles. (Imagine the reaction to a request to base such weaponry in Australia, targeting China.)

This overlaps with the third point. NATO might be put under more strain. If the United States leans on its European allies to support a new generation of intermediate-range missiles, there will likely be political pandemonium. On the other hand, the Europeans won’t want to face an unconstrained Russia without American backing. Being caught between Trump’s trash-talking of the Western alliance and Putin’s imperious tendencies would be very unpleasant.

Now that notice has been given, the treaty is due to terminate in six months. Perhaps Trump and Putin will be persuaded to see reason and change their minds, but don’t hold your breath. •