What comes after the housing boom?

It’s not so much the banks’ balance sheets we should be worried about, it’s the economy-wide impact of much larger household debts 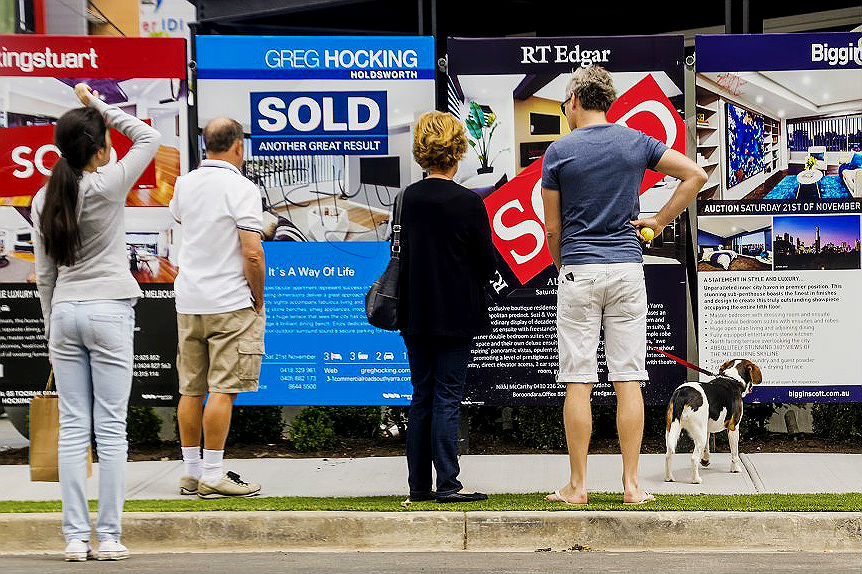 House prices have risen to dizzying heights and Australians have got themselves into more debt than ever. But the latest housing boom might soon be over, so it’s time to consider what happens if house prices fall. Although many commentators have focused on the risks of a fall for Australia’s banks, there’s a bigger question: what are the risks to the national economy?

After surging for five years, the growth in house prices is slowing in Melbourne and Sydney, the two epicentres of the boom. New lending volumes are down following a clampdown on interest-only loans. And there are signs that oversupply could hit apartment prices in parts of Brisbane and Melbourne.

Talk of a “bubble” threatening to pop misses an important point, though. Yes, house prices have risen rapidly – by more than 40 per cent nationally and 70 per cent in Sydney over the past five years. But there are good reasons why housing is so expensive today.

Australia’s population has surged by about 350,000 a year over the past decade, up from the 220,000 a year during the previous ten years. Record low interest rates have made it possible to service much larger mortgages. And most of the increase in house prices reflects restrictions on the effective supply of residential land – both limits on rezoning for urban infill and limits on developing land on the urban fringe. Dwelling construction has simply not kept pace. Several years of housing construction – probably at even faster rates than currently – will be needed to erode the large backlog that accumulated between 2006 and 2014, estimated at about 200,000 dwellings. Investors are also part of the story. Emboldened by recent price rises and armed with cheap credit, they have chased further house price gains. Investors now account for 40 per cent of all new mortgage credit. Negatively geared property remains a popular investment strategy. And with gross rental yields below 3 per cent in Melbourne and Sydney, such investments only make sense if investors are banking on future capital gains or a large rise in rents.

Of course, no one can predict with certainty what will happen to houses prices from here. But history provides some pointers. Past Australian housing booms have tended to end with prices falling modestly, or flat-lining for an extended period, rather than crashing down. Sharper falls are certainly possible – as the US and European experience during the global financial crisis shows – but they are unlikely in Australia while our regulators keep a tight rein on bank lending practices, unless we are hit by an economic downturn unrelated to housing. But what might happen to the banks, and the economy, if house prices do start to fall or if households struggle to make good on their debts?

Since the subprime mortgage crisis hit the United States, commentators have tended to focus on the risks that property market booms and busts pose to the banking sector. Higher levels of debt increase the risks of borrower default and thus the risks of banks getting into trouble, with all the economic chaos that would create. And household debt in Australia is now a record 190 per cent of household after-tax income, up from about 170 per cent between 2007 and 2015. In 2002, 20 per cent of households had debts of more than twice their income; today it’s 30 per cent.

But the risks of Australian banking instability are low because relatively few households have high loans-to-total-assets ratios and our banks are highly profitable and well capitalised by international standards. As Reserve Bank governor Philip Lowe noted in a recent speech, it’s the riskiest borrower who gets into trouble first in a downturn. And most of those taking on larger debts in Australia appear to be from wealthier households well placed to service those debts. But there is always a risk that banks will drop their lending standards as they compete for business. One-third of borrowers have either no accrued buffer or a buffer of less than one month’s repayments. This is not historically high – indeed, more households have a buffer on their loan today than at any time since the Household, Income and Labour Dynamics in Australia Survey began in 2002. But those with minimal buffers tend to have newer mortgages, or to be lower-income or lower-wealth households.

That’s why Australia’s banking regulator, the Australian Prudential Regulation Authority, or APRA, is limiting banks’ new interest-only lending to 30 per cent of total new residential mortgage lending. This followed its move in late 2014 to limit growth in each bank’s total lending to property investors to no more than 10 per cent each year. And APRA may soon require banks to hold more capital against their loans, in line with recommendations from the 2014 Financial System Inquiry to make our banks’ capital ratios “unquestionably strong.”

We should be more concerned about the risk that much higher debts could prompt a rapid fall in household spending in the event of a downturn. Household consumption accounts for well over half of GDP. Recent Reserve Bank of Australia research shows that households with higher debts are more likely to reduce spending if their incomes fall. A rise in unemployment, perhaps prompted by a slowdown in China or a stuttering US recovery, would force many people to save more – and consume less.

Even a relatively small rise in the interest rates paid by households would crimp their spending. Our research at the Grattan Institute shows that if interest rates rise by just two percentage points, mortgage payments on a new home will take up more of a household’s income than at any time in the past two decades. While the RBA would only lift interest rates cautiously, another disruption to international financial markets like the 2008 shock could sharply increase banks’ funding costs, raising mortgage rates.

Falling house prices may also result in reduced consumption if home owners feel poorer. But estimates of the size of this effect vary widely. One recent RBA paper estimated that each dollar of housing wealth lost reduced household consumption by about a quarter of one cent, implying a 0.1 per cent fall in GDP for each 10 per cent fall in house prices. Another paper suggested that such a “wealth effect” could be ten times as large. So how should policy-makers respond to these risks? First, the RBA needs to be especially careful when it feels the need to raise interest rates. Higher debt levels mean household spending is likely to fall more when interest rates rise than it did in the past. Perhaps the RBA should make smaller shifts in the cash rate – such as ten basis points, or a tenth of a per cent – to cushion the impact of future rate rises.

Second, Australia’s financial regulators – APRA and the Australian Securities and Investments Commission – need to be ready to clamp down on banks making risky loans if there are signs that lending practices are deteriorating. But that doesn’t mean lending should be restricted simply in order to bring down house prices.

Third, the federal government needs to get its fiscal house in order. Australia urgently needs a better budget position so we have more room to manoeuvre in difficult times. The Australian economy is particularly exposed: with interest rates at historical lows, there are limits to what the RBA can do to stimulate growth, so fiscal stimulus will be an important part of the response to any future economic shock. •

John Daley is Chief Executive Officer, Brendan Coates is Australian Perspectives Fellow, and Trent Wiltshire is an Associate at the Grattan Institute.