What is it about Queensland?

Now that the federal election result is clear, one state stands out, says Peter Brent 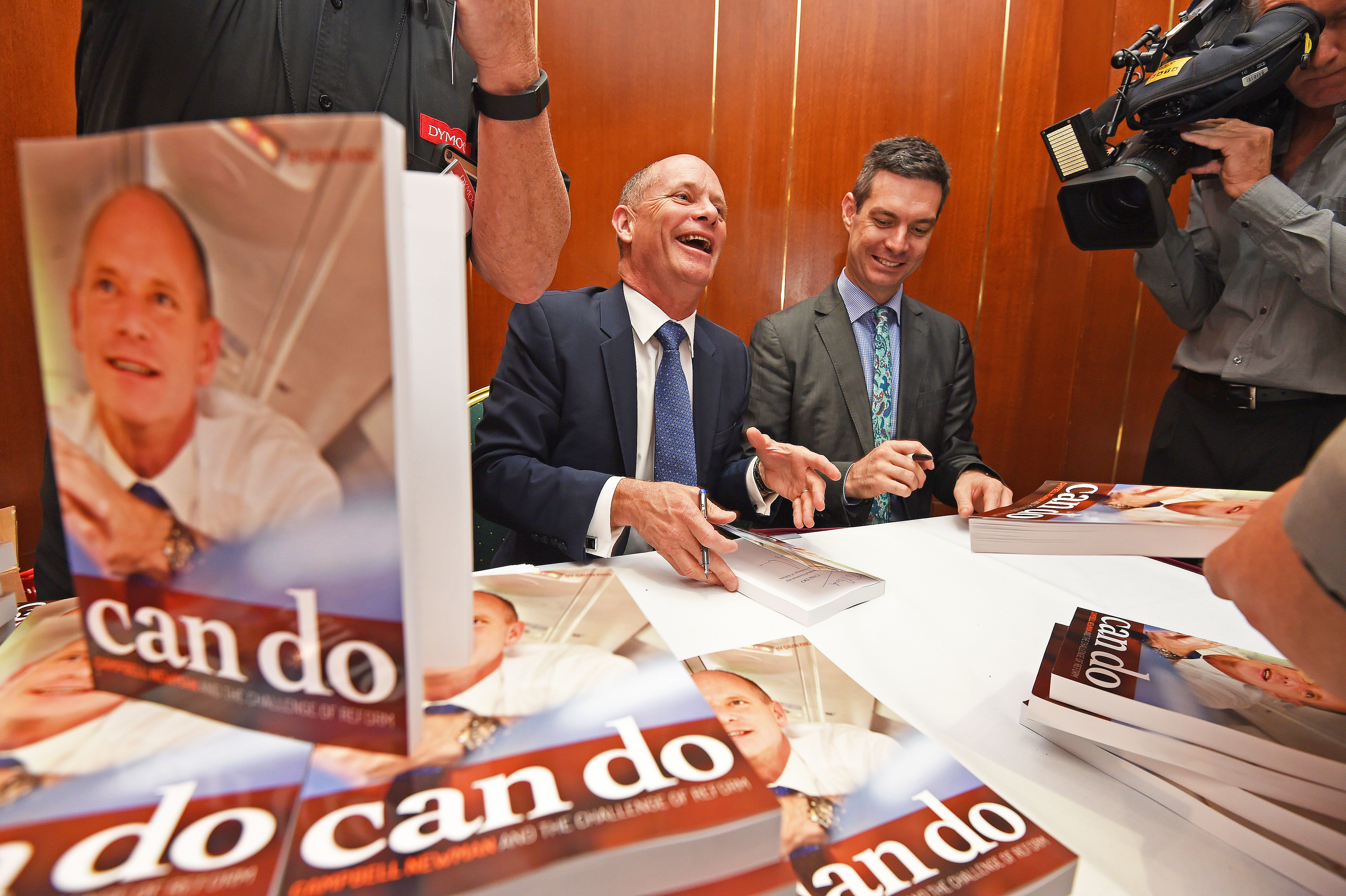 The gift that went on giving: former Queensland premier Campbell Newman at the launch of his biography last October. With him is its author, former Liberal National Party MP Gavin King. Dan Peled/AAP Image

As Malcolm Turnbull attempts to replenish his depleted party-room authority, the person he can thank most for his re-election is not in federal parliament, nor on his campaign team, nor in his inner or even outer circles.

It’s Campbell Newman, whose action-packed tenure as thirty-eighth premier of Queensland lasted from 2012 to 2015.

The federal Coalition appears to have scraped together seventy-seven MPs, give or take, in the 150-seat House of Representatives, a working majority of four. When the two-party-preferred vote count is complete, it will aggregate to around 50.6 per cent for the Coalition and 49.4 per cent for Labor.

That might seem like a close vote, but since the introduction of preferential voting in 1918, eight federal governments have survived with less national support, and six of those with under 50 per cent.

The 3 per cent or so national swing to Labor was made up of these estimated state components (all to Labor): Tasmania 6.0 per cent, South Australia 4.5, New South Wales 3.8, Western Australia 2.7, Queensland 2.6 and Victoria 1.6.

Can you spot a pattern?

Between the 2013 and 2016 federal election, voters in three states changed their governments. A detested Tasmanian Labor outfit was thrashed out of office in 2015; that state sits at number one on the list above. Governments shifted the other way, from conservative to Labor, in Queensland and Victoria, and those two bring up the rear in this swing list.

All else being equal, state governments, particularly disliked ones, tend to suppress support for their federal counterpart party. It works the other way round, too; polled support for every state conservative party took a hit after the 2013 election of the Abbott government.

New South Wales was Labor’s unexpected treat on 2 July. The most populous state went off like a bunger, producing four new seats for the opposition (from the notional post-redistribution position), including those two hitherto-legendary bellwethers, Lindsay and Eden-Monaro. Labor now has the barest of seat majorities in that state, albeit with a slight vote minority.

Western Australia’s swing was lower than anticipated, but the two-seat haul met general projections. Victoria, off Labor’s highest base, saw the only Coalition gain, but Labor still holds a slight majority of Victorian electorates. The opposition holds six of South Australia’s eleven seats, and the Liberals now hold none whatsoever in Tasmania.

But Queensland, from Bill Shorten’s point of view, really let the side down. Assuming Herbert (where counting continues) remains in the Coalition pile, Labor managed to scoop up just one extra seat there, increasing its tally from six to a still-feeble seven out of thirty. Even the most pessimistic expectation of Labor’s national performance contained a better Queensland component than that.

How is it that the state Labor campaign team, which performed so brilliantly seventeen months ago, generating a 14 per cent vote swing against the Liberal National Party and increasing Labor’s seat haul by a touch under 400 per cent, put in such a fizzer this time?

The overriding reason is that campaigners are never as brilliant or as woeful as they are made out to be. Newman was an erratic, combative and politically inept premier. While everyone expected him to lose his seat of Ashgrove last year, most, including the Queensland Labor Party itself, were surprised when he handed them a narrow, minority-government victory.

That result set off February’s federal Liberal leadership spill. The motion failed, but its very occurrence mortally wounded prime minister Tony Abbott. (Abbott’s dire standing in the electorate, capped off by his knighting of Prince Philip days before the Queensland poll, had itself contributed to the LNP’s loss.)

But most importantly for the Coalition, Palaszczuk’s victory depressed Labor support in Queensland this month. This is less about what her government has done in office and more about the mere fact of its existence.

If you reckon that’s a bold assertion, consider the untravelled road of a still-unloved Queensland LNP administration, halfway into its second term when Malcolm Turnbull went to the polls this month.

Another four seats for Labor in Queensland would have seen a hung parliament. (Then the Liberals would be kicking themselves for rescuing, via their how-to-vote cards, Labor in Batman and Wills. But that’s another story.)

The 2016 election was characterised by a big resurgence in Coalition support during the post–election day count. This was overwhelmingly due to the record high postal vote, around 9 per cent of turnout, and the fact that it favoured the Coalition even more than usual.

On current numbers, election-day votes swung to Labor by 3.3 per cent but postals by only 1.6 per cent.

The Liberals apparently ran a highly energetic postal vote campaign, but it is unclear if that simply resulted in Coalition supporters opting for this form of voting rather than turning out on polling day.

Had the election-night count erred in the other direction, the hysterical bout of score-settling inside the Liberal Party would not have eventuated, at least to the degree we have seen. Turnbull’s standing wouldn’t have taken such a battering, with things said by Liberal MPs and the wider movement that can’t be unsaid, and all because of what appeared, on election night, to be a hung parliament.

The role played by the postal vote campaign might be something for the Liberal Party to consider in future elections.

The Coalition’s national primary vote currently sits at 42.2 per cent and Labor’s 34.9 per cent, which is a larger gap than David Cameron’s 6.5 per cent win against his Labour opponents at last year’s British election.

The Brits, of course, elect their House of Commons under first-past-the-post, while we use preferences for our national lower chamber, and full, compulsory preferences at that.

The halfway house of optional preferential voting would have produced a more comfortable Coalition win this year, and would have given Abbott the prime ministership in 2010 as well. Thanks to this year’s Electoral Act changes, we now have optional preferential voting in the Senate, and self-interest would suggest that the Coalition should consider introducing it to the lower house as well (as self-interest drove Queensland Labor to move the other way this year).

Regardless of which side would benefit, optional preferential voting in the House of Representatives would be a desirable reform, in my opinion.

And so would counting the majority of postal votes on election night. •