Who is Santo Santoro? 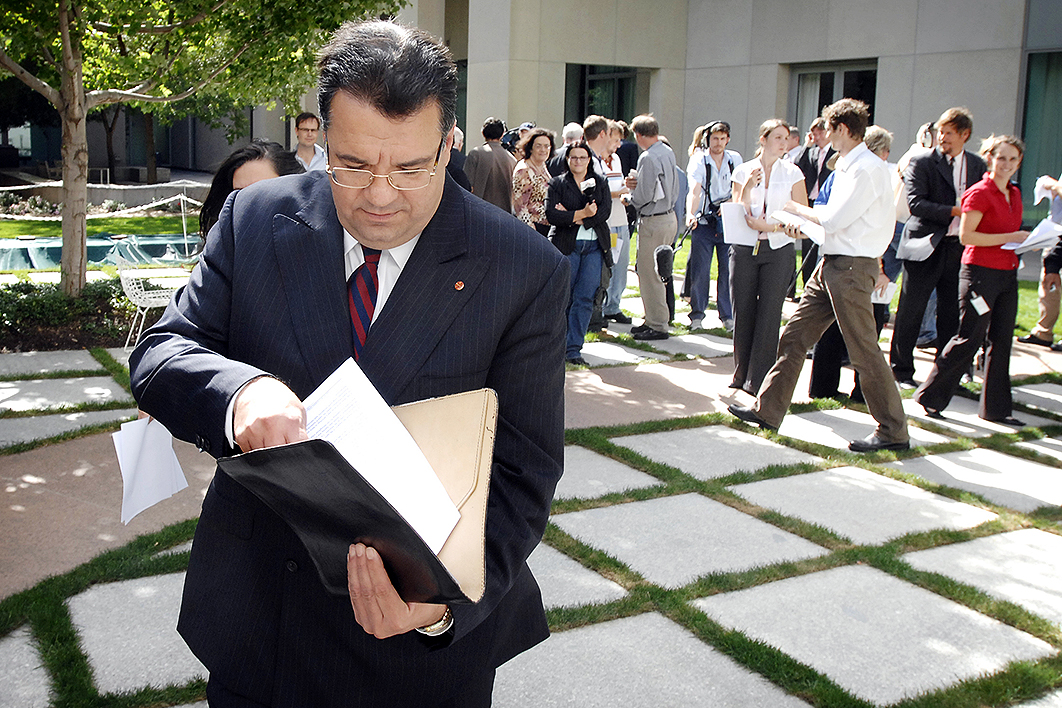 The assertion that Queensland Liberals are — or rather were — unique in Australian politics is perhaps as overused as it is true. As the only branch of the party to be a junior partner to the Nationals in a Coalition government or opposition, they have long suffered for their modest size and inchoate identity.

It’s not hard to see how this came about. Queensland’s regional industries have historically produced farmers, miners and labourers more inclined to vote for the Country Party (and later the Nationals) or Labor. Despite their modest numbers, though, the Liberals were long plagued by factionalism, and tensions between progressive Liberals and conservatives loyal to Nationals premier Joh Bjelke-Petersen were at the heart of the state Coalition’s disintegration in 1983.

The Liberal Party ceased to exist in Queensland in 2008, of course, when it merged with the National Party to form the Liberal National Party, or LNP. Yet the factionalism lives on, more than a decade later, between and within the two tribes. And the mere mention of Queensland Liberal factionalism still evokes one name above all: Santo Santoro.

Having joined the Queensland Young Liberals in 1977 at the age of twenty-one, the Italian-born Santoro studied arts and economics at the University of Queensland before joining the party’s federal executive in the 1980s. Following stints working for the Queensland Confederation of Industry and, later, Queensland Liberal senator Warwick Parer, he won the safe state seat of Merthyr (later Clayfield) from the Nationals (who had recently been disgraced by the Fitzgerald Inquiry) in 1989.

He went on to hold ministerial and shadow ministerial roles in employment, industrial relations, police and ethnic affairs, and to serve as deputy state party leader between 1992 and 1995. Over time, though, the once-reliable voters of Clayfield turned against him, and he was defeated by Labor’s Liddy Clark in 2001.

If not quite a meteoric rise, the advancement of the uncompromisingly conservative Santoro, something of an ideological “outsider” from Brisbane’s inner north, had been remarkable in a party long dominated by small ‘l’ liberal blue bloods from the leafy western suburbs. The fact that he possessed a canny ability to cultivate support and organise the numbers was clear. As a result, the 1990s had seen the ranks of a certain variety of conservative MP — members of the “Santoro faction” — begin to swell considerably, and numbers further increased in the new century.

After the 2012 landslide victory of LNP leader Campbell Newman — who was aligned with Santoro and recruited from local government by Santoro powerbrokers — the faction came to control the LNP. By this time, Santoro was both a lobbyist and one of four federal Liberal Party vice-presidents — a combined role allowed by federal Liberal rules but not by the Queensland LNP. Despite his reputation as a stellar party fundraiser state LNP figures were angered by Santoro’s internal party ambitions, fearing not only a potential conflict of interest but also a return to 1990s-style factionalism. The fact that Newman’s successor as leader, Tim Nicholls (who had inherited Clayfield), was also a Santoro protégé again underscores the chieftain’s influence despite years away from the public spotlight.

It is, of course, his spectacular exit from the spotlight that explains why Santoro is remembered outside Queensland. Representing the state as a Liberal senator between 2002 and 2007 (having never faced a federal election), he became embroiled in a potential conflict of interest — a failure to disclose shares in a company related to his ministerial portfolio — just as the stumbling Howard government was losing electoral traction. As University of Queensland researcher Chris Salisbury says, “Santoro simply fell foul of Howard’s ministerial standards.” He had to go.

He soon carved out a lucrative niche as a consultant and lobbyist, reportedly charging tens of thousands of dollars for his services. Clients undoubtedly saw value for money in Santoro’s experience and credentials. Indeed, his business website boasts that his “familiarity with leading players in both the public and private sectors, and his broad network of international corporate and government contacts enable him to frame optimal strategic responses to policy and business challenges and opportunities.”

Even away from politics, he has never been far from controversy. In late 2012, for example, LNP figures referred him to police over allegations he controlled a private trust that “traded in shares and was being used as a ‘clearing house’ for political donations.” Police decided against taking action over what Santoro declared to be a “stitch-up.” Then, in 2014, he was forced to resign as federal Liberal Party vice-president under new rules that excluded lobbyists from party positions.

Santoro’s fiercest critics within and beyond the LNP might therefore be unsurprised to hear the powerbroker’s name mixed up in allegations that Chinese billionaire and party donor Huang Xiangmo paid to gain access to the then immigration minister (and fellow Queensland conservative) Peter Dutton to press his case for Australian citizenship. His application was later denied.

The question of how much genuine influence Santoro still wields in Queensland conservative circles is therefore an obvious one, and not easily answered in an opaque world of backroom machinations.

But Chris Salisbury, a close observer of Queensland politics, has a clearer view than most. “Everyone expected Santo’s influence to wane after leaving parliament, but it doesn’t seem to have waned that much,” he says. “The latest imbroglio won’t end Santoro’s influence, either. Santo doesn’t take setbacks lightly. He is still a player and, for someone who’s been out of parliament for so long, it speaks volumes that we’re still talking about him.”

But Salisbury concedes appearances can be deceptive. “Santoro has long floated around the party’s fringes, looking more like an influencer than a key player,” he says. “Making claims of influence over — and access to — current ministers therefore suggests a desperate grab for relevance that might not reflect reality. In fact, I’m surprised by claims of a closeness between Santoro and Dutton.”

Queensland’s political aquarium is small compared with New South Wales and Victoria. LNP or Labor fish don’t have to swim too far, or be very large, to be noticed, courted or feared by party guppies. In that sense, it’s likely Santoro will swim right around this week’s allegations, just as he’s swum around other controversies, and yet again emerge unscathed. Then, in the insular tank of Queensland conservative politics, he will continue to make a splash. •

Paul Williams is Senior Lecturer in Politics at Griffith University.