Why don’t we design better suburbs? 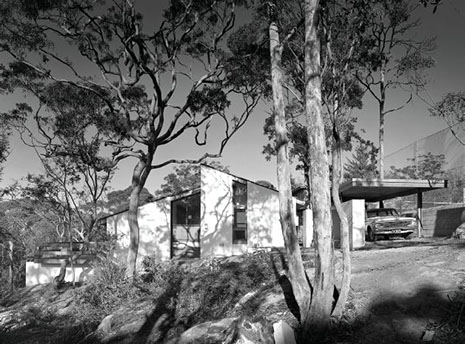 DESPITE the growing popularity of what we used to call “home units,” over three quarters of the population still lives in detached houses in the suburbs. Town planners, architects, engineers, state governments and most local governments keep telling us that we should consume less land and live in denser neighbourhoods, but this book is another reminder that a lot of us still want homes with gardens. Large apartments with water views or inner city locations might have proved attractive to double-income households and some wealthy retirees, but many flat dwellers are there out of necessity rather than choice.

Designer Suburbs makes an ambitious attempt to span two quite different kinds of detached housing: modernist, architecturally designed houses built on spectacular sites, and the mass-produced houses, usually built according to a formula with limited architectural input. The book opens with a bevy of tempting images, juxtaposing the conservative designs celebrated by the Australian Town Planning Conference at the end of the first world war with the Walter Burley Griffin’s low, flat-roofed houses built from concrete and local stone in a Castlecrag landscape where most trees have been felled by nearby residents for firewood. There follows a luxurious colour double-spread of Le Corbusier’s Villa Savoye (completed in 1929) in the Paris hinterland, along with Phillip Johnson’s almost transparent Glass House in Connecticut (1949). Echoes of both can be seen in the Rose Seidler house at Turramurra (1950), designed by her son, Harry, who had migrated to Australia soon after graduating in architecture from Harvard. The house, now owned by the Historic Houses Trust, is celebrated in Sydney with an annual 1950s fair.

The text, befitting a fruitful collaboration between an architect and a social historian, doesn’t shy away from the less dramatic housing options for the plebs, including plans developed by manufacturers Wunderlich and James Hardie using the new wonder material, asbestos, because it is “economical to build and delightful to live in.” As they observe, some of these houses were very small – a sixty-square-metre fibro cottage among them – but this was a time when tens of thousands of owner builders lived in makeshift garages while they built their “proper” house with the help of neighbours and the odd carpenter.

With rapidly growing car ownership meaning that many families could have a sticky beak on the weekend, home shows and model display villages loom large in this account. “Futurama” opened in the Melbourne suburb of Mount Waverley in 1959, offering fifteen fully furnished homes in an American-style display village. Building companies, furniture retailers and building-material manufacturers sponsored the village, which boasted a children’s playground to give mum and dad time to put a £65 deposit on a furnished home on their own land. Increasingly, new companies offered house-and-land packages so that purchasers simply needed to get a single loan from the bank. Second world war veterans were offered low-interest loans over repayment periods of up to forty years. It was the heyday of egalitarian housing in Australia.

For a nation still besotted with home ownership, we have remarkably few books that focus on the dwellings we live in. Without doubt, the classic study remains Robyn Boyd’s Australia’s Home, a superb historical, architectural and sociological account, drawing on his own design sensibilities and a long family tradition of artistic and literary achievement. O’Callaghan and Pickett acknowledge the importance of Boyd’s book, and follow him in paying a little too much attention to “name” architects rather to than the work of the usually anonymous architects employed by banks, housing commissions and even state electricity commissions. These back office architects are still the workhorses of a profession that thrives on the front-office names amply acknowledged in state and national architectural awards.

The authors of this book aren’t really much interested in affordability, other than in the size of houses and types of building materials and the economies possible from larger-scale building and development operations. We don’t learn much about how houses are financed, or how banks and building societies, in the era before the big suburban developers, went about deciding what sort of new housing would qualify for a mortgage. Likewise, the owner-builders of the 1950s and 1960s get scant attention, other than in the mention of their reliance on free plans published in periodicals such as Home Beautiful and the hundreds of house-plan books published in the 1950s and 1960s.

O’Callaghan and Pickett praise the ambitions and the products of two firms in particular, Melbourne’s Merchant Builders (headed by John Ridge, Graeme Gunn and David Yencken) and Sydney’s Pettit and Sevitt. Both companies abhorred front fences and took the natural terrain into account in siting their houses. Exposed beams were popular and cul de sac developments were often used to separate through-traffic from residential streets, a central aim of the town planning profession for many decades past. The Pettit and Sevitt houses, advertised with witty, intellectual ads in the Sydney Morning Herald, had the advantage of spectacular Sydney settings, often abutting the bushland of the “Green Belt,” which was under challenge from rapacious developers and young professionals keen to house their families in a natural setting. With the benefit of hindsight it is easy to point out that the steep sites meant that the houses often had two or even three levels, with stairways unsuitable both for young children and adults over sixty, let alone anyone else with mobility issues.

CAN suburbs really be designed? What this book shows is that many of our architects have tried to produce innovative, attractive and affordable designs for individual houses. Beyond the individual block, though, the architectural institutes were originally very wary of the large-scale ambitions of project home developers, even when they had architects working for them. Very few architects have had the vision, the developer backing, the sizeable parcels of land or perhaps even the gumption to design whole suburbs. The outstanding exceptions are the Griffins at Castlecrag, building for a middle-class market that could afford cars and didn’t mind the lousy public transport.

With its explicit concentration on Sydney and Melbourne, this book doesn’t include Australia’s most impressive and affordable “designer suburbs,” built in Canberra in the 1950s. The authors overlook the hard work of the almost anonymous architects and town planners who created the capital’s inner suburbs in the 1930s and the 1950s. There were, of course, special reasons why these were such affordable homes. Canberra’s leasehold system meant that land values were not an overwhelming obstacle for people on low incomes who wanted to rent or buy property. The suburbs that resulted – from swanky Manuka and Red Hill to the then relatively modest Griffith and the positively downmarket Narrabundah – had notable design features that most new suburbs still lack. Each had its own shopping centre, and most residents were within fifteen minutes’ walk of both the shops and local schools.

Even more impressively, a network of footpaths in each of the suburbs enabled children and the elderly to move about without continually confronting main roads. One of the great failings of the architecture and town planning professions in Australia over the last twenty years is their loss of interest in how people move around suburbs. The wealthier architects, let alone the developers, drive expensive cars and hardly ever use public transport, while the town planners have become so besotted with higher densities and so-called “transport-oriented developments” that they have lost sight of pedestrian movement in the suburbs. Even socially aware architects show more interest in movement within the houses they design than in movement beyond them.

I’m not suggesting that architects, developers, builders or town planners can avoid or ignore market demands. As a town planner once remarked to me, many Australian men would park their car in the living room if they had the chance. In the final chapter of this book, “Suburbia on steroids: a land of giants,” the authors delight in poking fun at grand suburban mansions with facades dominated by the double garage. A friend in Canberra used to refer to the McMansions that spouted in the Canberra suburb of O’Malley as “giraffe houses” because the pretentious porticos were so high that they could easily accommodate a visiting giraffe.

Why can’t we design better suburbs? There are five main reasons. Prospective homeowners give more thought to choosing a home and a locality than they do to how the suburb functions in a day-to-day sense. Architects, even when they do pay attention to the client, focus on external appearance, site location and internal layout. Investors focus on likely rents, rates of return and hoped-for capital gains. Developers have no interest in the environment beyond their cul de sac or model estate, other than for marketing purposes. And local council planners have such modest powers that they have to sweet talk developers and transport planners into trying to create a pleasant street environment where people can safely walk to shop, school or public transport.

Designer Suburbs is an elegantly produced book that will occasion comment on many a coffee table, even in the “ex-govie” houses to be found across the nation. It is well written, finely illustrated, and lends itself to urbane conversation. And if your Meriton, Central Equity or Australand apartment is getting you down, especially the ones that look out over noisy freeways, you can dream of the Australia of the 1950s, when Walter Bunning’s Homes in the Sun summed up the aspirations of the postwar generation. Most people who grew up in the 1950s and 1960s did so in pleasant and often well-designed houses, including the products of the NSW Housing Commission in Wollongong and the State Electricity Commission of Victoria’s town of Yallourn.

We now have at least two generations of Australians who have been forced to live in crowded and often noisy apartment blocks. The blocks have been built by developers to be sold to investors for the rental market. Designer suburbs are but a distant dream from a past era. Pedestrian networks separate from the road system are now frowned on: they cost the developer a little more, and we have become a society paranoid about robbery. The response, the pseudo-gated estates that have sprung up from Melton in Melbourne to Northlakes in Brisbane, are so dependent on the car that walking anywhere is an affront to capacious house driveways. Children are delivered to school in oversized SUVs and parents clog the so-called freeways to get to work. Individual houses may often still be well-designed, but with a handful of exceptions, the new suburbs are not. •

Peter Spearritt grew up on a former John Wren racecourse subdivision, at Aspendale in Melbourne, surrounded by owner builders. He has since lived in Sydney, Canberra, Melbourne and Brisbane.

Fletch, Muscles and the Rocket

Rod Laver says Ken Rosewall (above) is the “least appreciated great player in the history of tennis.” AAP Image/Presse Sports 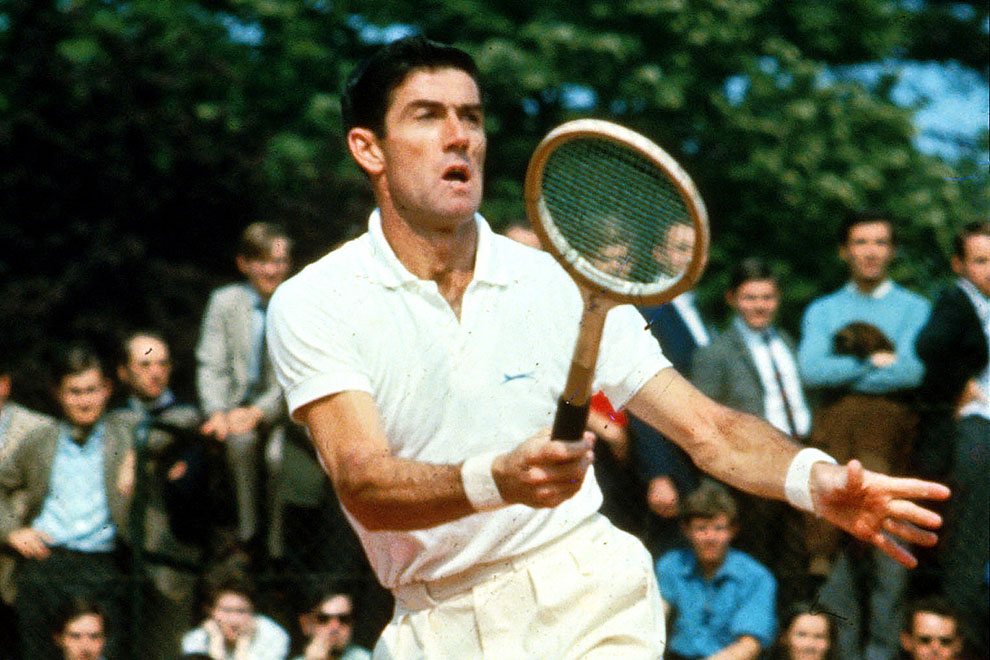 Rod Laver says Ken Rosewall (above) is the “least appreciated great player in the history of tennis.” AAP Image/Presse Sports