Why not New Zealand?

The Turnbull government says it won’t allow refugees to be resettled in New Zealand because it’s the “back door” to Australia. Its argument rests on a series of misconceptions, writes Peter Mares 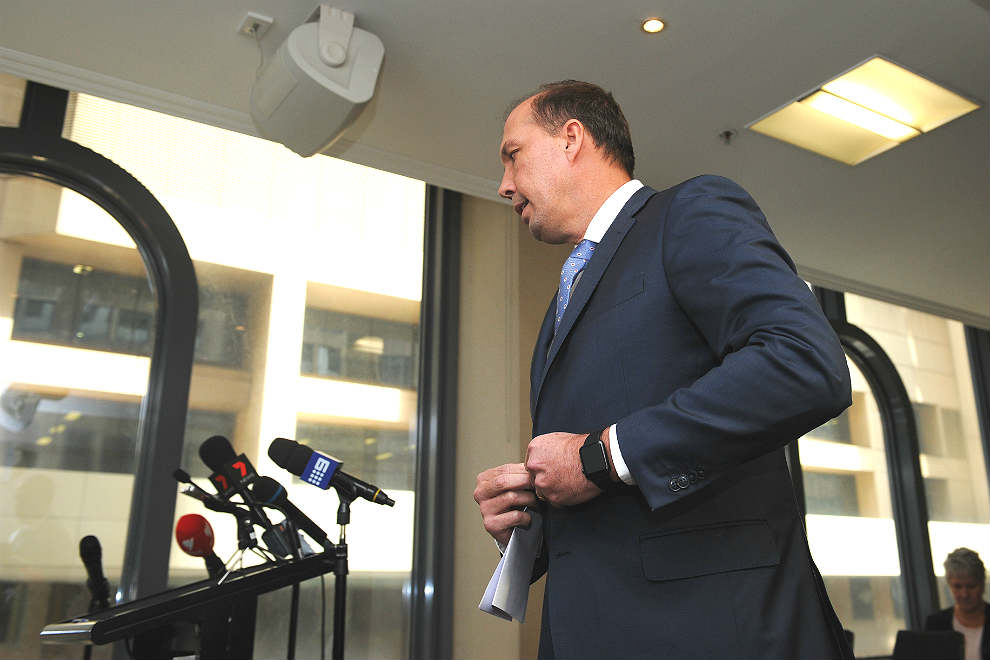 Malcolm Turnbull sounded decidedly uncomfortable when Fran Kelly switched the topic to offshore detention at the end of his post-budget interview on Radio National Breakfast. The previously unruffled PM struggled to get his words out and was suddenly afflicted by a cough. He was no doubt relieved when the eight o’clock news saved him from further questioning.

To his credit, Turnbull at least expressed sympathy for the misery and mental anguish of refugees and asylum seekers in Manus and Nauru. Unlike his immigration minister, Peter Dutton, he has not stooped to blaming “advocates and others” for encouraging self-harm as a way of pressuring the government to change its policy. But Turnbull held fast to the line that these refugees can never be allowed to settle in Australia. When Kelly posed the obvious question in response – “So what will we do with them?” – the prime minister floundered.

The memorandum of understanding signed between Australia and Nauru in August 2012 holds out the possibility that an “agreed number” of refugees will be settled in Nauru, but if any such number exists it seems not to have been made public. For now, the refugees are on temporary visas, and another clause in the memorandum requires Australia to “make all efforts to ensure that all transferees depart the Republic of Nauru within as short a time as is reasonably necessary…”

In Papua New Guinea, meanwhile, prime minister Peter O’Neill says that the Manus processing facility must close following the Supreme Court ruling that the detention of asylum seekers is illegal. Refugees who want to settle in Papua New Guinea are welcome to do so, but – recognising that most don’t want to – he asked Australia to make “alternative arrangements” for everyone else.

In other words, Australia needs to find somewhere else for both groups of refugees to settle. But the only third-country resettlement option tried so far – Cambodia – has proved an expensive failure.

This explains why Turnbull’s initial response to Kelly’s question remained unfinished. The government can’t say what it will do with the refugees in Manus and Nauru because it doesn’t know. Yet it steadfastly continues to rule out the only available, practical and safe option of New Zealand.

In 2013, as Inside Story reported late last year, NZ prime minister John Key offered to help out Australia by resettling up to 150 refugees each year over two years. In the wake of the decision to close the Manus detention centre last month, the office of New Zealand’s immigration minister confirmed that this offer is still on the table. While places for this year and the previous year have been allocated to humanitarian migrants from Syria and Iraq, New Zealand could make another 150 places available to Australia in the new financial year – that is, as soon as July.

Turnbull says Australia will not take up the offer because settlement “in a country like New Zealand would be used by the people smugglers as a marketing opportunity.” Dutton ran a similar line, describing New Zealand as “a back-door way to get into Australia.”

The idea that migrants can use New Zealand as a back door to Australia has a long and ignominious history. As an argument, it doesn’t stand much scrutiny. It’s certainly true that New Zealand citizens can enter Australia and live and work here as long as they want under what is known as the “special category visa” issued on arrival, and it’s true that they can also qualify for Medicare under reciprocal arrangements between the two countries. But to describe this as back-door migration is absurd. It suggests that refugees will simply step onto the tarmac at Auckland airport, do a quick turn through the transit lounge, and end up in Sydney or Melbourne.

The first thing to remember is that a refugee resettled in New Zealand can only move to Australia after becoming an NZ citizen, a process that takes a minimum of five years. It is quite a stretch to call this process, as Dutton does, a “green light” to people smugglers.

On top of that, it’s highly unlikely that a refugee-turned-NZ-citizen would decide to come to Australia after five years. Apart from healthcare, they would have almost no access to government services and payments. Under changes introduced by the Howard government in 2001, New Zealanders who move to Australia really are in a “special category” – the category of long-term migrants on temporary visas. They can’t get access to unemployment benefits, youth allowance, sickness benefits, sole parent payments, carer payments or special benefits. They are generally excluded from public or community housing under state and territory rules, and they must pay full up-front fees to study at university (unless they arrived in Australia before the age of eighteen and have been living here for at least ten years). Regardless of how long they live in Australia, New Zealanders can’t vote and have only restricted options for becoming permanent residents and taking out Australian citizenship.

It seems highly unlikely that refugees, having settled in New Zealand and gained access to its social safety net, would choose to bolt across the ditch the moment their Kiwi passport arrived in the mail. If they did end up coming here, it would be because, like other New Zealanders in Australia, they are in demand from Australian employers to fill gaps in the local labour market.

Since 1973, Australia and New Zealand have agreed to unrestricted trans-Tasman travel to promote the closer integration of the two countries’ economies. In this sense, it is a front door, not a back door, and both countries have decided that it is in their interests to keep that door propped open. If the Australian government thinks that the benefits of unrestricted trans-Tasman travel are outweighed by letting in tiny numbers of refugees who once tried to come here by boat, then it can kick the door closed again any time it wants.

If refugees in Manus and Nauru have aspirations to be resettled in New Zealand rather than Cambodia or Papua New Guinea, that is because it offers them a safe and secure future where they might rebuild their lives, not because it offers a circuitous route to Australia.

So if the government claims that we cannot allow refugees to be resettled in New Zealand because this encourages people smuggling, then the same argument must apply to settling these refugees in any other third country that could offer an enduring and dignified solution to their plight. This logic leaves us with only two options: either we keep these refugees in misery and mental anguish in Nauru and Manus indefinitely, or we send them to another country that offers them an equally uncertain and precarious future. Any other solution would be a green light to the people smugglers. •

Peter Mares is contributing editor of Inside Story and an Adjunct Fellow at the Swinburne Institute for Social Research.