Why we would gain from a regional approach to refugee protection

What would a sustainable regional approach look like? Anne McNevin outlines the main features – and benefits – of an alternative to the Labor–Coalition deterrence consensus 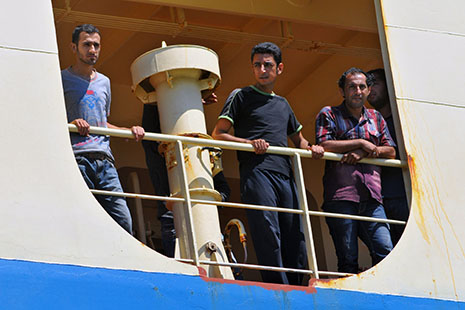 Iraqi asylum seekers look out from a cargo ship that rescued them after their boat sank off Java island en route to Australia on 27 July.
Photo: Idhad Zakaria/ AP

LAST week in Inside Story I argued that both sides of politics are having the wrong conversation about asylum seekers, focusing on how to stop the boats coming rather than looking at why they come. Overwhelmingly (in over 90 per cent of cases, according to the government’s own statistics), they come because of the need for protection as refugees. As long as we persist with a policy framework based on blocking lawful transit to places where protection can be accessed, we perpetuate a market in irregular transit. Far from breaking the “people smuggler’s business model,” our current policy framework gives life to it.

If the answer lies in making protection available to refugees, what would a sustainable regional approach look like?

Protection for refugees has two dimensions: (1) immediate physical safety, free of persecution, and (2) the ability to generate a livelihood, reunite with and provide for one’s family, and educate one’s children – the basics for living a dignified life. These two dimensions account for why asylum seekers move from countries of first asylum (transit countries) to others and why some countries are unacceptable as long-term resettlement options. (1) may well be achieved by moving from a source country like Afghanistan to a transit country like Indonesia. But (2) is currently not possible in many regional transit countries, either because the legal infrastructure does not recognise refugee rights and leaves refugees vulnerable to arrest and unable to work lawfully (Malaysia, Indonesia), or because levels of development and the specifics of social arrangements do not currently permit for local integration (Papua New Guinea). Without (2), refugees are left in a virtual state of social and economic limbo, if not destitution, even if (1) is satisfied.

There are several reasons why Australia should develop a regional approach that delivers both (1) and (2). The reasons most often cited rest on our obligations under international law and the broader moral case to engage with refugees as fellow humans in need. There are other more self-interested but also compelling cases to be made. We currently divert enormous human and financial resources to “border protection.” Yet none of Australia’s policies focuses in a significant way on either the root causes of forced migration or the drivers of onward journeys from transit countries. Our current policy settings tackle symptoms rather than causes – an expensive approach that doesn’t ultimately offer the “order” that it promises.

Deterring boats moving from Indonesia to Australia – even if successful – backs up the problem in Indonesia. This places a strain on bilateral relations and becomes “our” problem again. It also leaves asylum seekers in Indonesia without access to protection (1)+(2). The market for transit to protection somewhere else remains. People smugglers will exploit that market and the circular effect from deterrence will continue.

A regional approach to protection would prevent perilous boat journeys by removing the need to take them. For asylum seekers, the decision to get on a boat is driven by the availability (or not) of protection (incorporating (1) and (2) above). The aim is to provide that protection – or a pathway to it – where people are and when they need it. A regional approach needs to provide fair and efficient processing of protection claims in transit countries with a commitment to a resolution of those claims (resettlement for designated refugees) within a reasonable time frame. If a realistic end-point to the processing phase is in sight, I suspect asylum seekers will wait for it, even if it means that some aspects of the second dimension of protection (2) are delayed (family reunion, for instance). The problem comes when we do not offer people any realistic prospect of achieving (2) or we make the delay so long as to harm mental and physical health.

Timely processing requires a collaborative effort either by building the legal and administrative capacity of regional states to conduct processing, or by resourcing the UNHCR to provide an administratively (but not geographically) centralised processing service. In a recent article in the Conversation, Andrew Jakubowicz has provided some good ideas about how visa arrangements might work at this stage of the process.

After processing, resettlement could take place anywhere in the region that was resourced and supported, with some consideration to the particular needs of refugees (proximity to family, cultural preferences and so on). The costs of processing and resettlement would need to be shared across the region according to capacity, rather than being borne by the host country alone. Currently Australia and New Zealand are the only two countries adequately resourced for resettlement. But there is nothing to prevent other countries in the region from being equipped. For instance, development funding could be linked to resettlement projects. This would be a sensible use of foreign aid budgets and a way of attracting international and donor agency development funds. The prospect of such funds might also act as an incentive to the prior necessity of acceding to the Refugee Convention.

Consider this in-principle idea. Town or village X commits to resettling a certain number of refugees. That commitment is matched by development funding to generate investment, and to expand income-generation activities and health and education facilities, such that both locals and refugees benefit. Resettling refugees becomes associated with economic development rather than being seen as a drain on already limited resources. The boost from productive investment helps to alleviate social tensions around new arrivals.

Clearly, this approach requires fleshing out by local communities and businesses and those with expertise in development. It won’t be appropriate everywhere, and in the short term it will work in some places better than others. Clearly there are more and less effective ways of tying development to resettlement and we risk unintended consequences from ill-considered and opportunistic schemes. But the idea gets us focused on the conversation we need to be having: how to provide sustainable options for people to live dignified lives free of persecution (refugees) and how those in the region who are not refugees can learn to live productively with the ongoing reality of people who need to be on the move.

A regional approach must be negotiated with, rather than dictated to, regional governments. It can only work if all parties have genuine incentives to participate and stand to make long-term gains. There are several ways to benefit and benefits will differ from country to country. Some may gain from development spin-offs (from investment or labour or both). Some may benefit from a more even distribution of costs. All are likely to benefit from the greater regional stability that the effective provision of protection, linked to development, would create.

This kind of approach will be expensive. But so is the alternative. The costs of our current policies are running into the billions and are only set to increase. Yet deterrence does not come with the long-term pay-offs that a protection framework provides – for Australia, for the region and for refugees. •

Anne McNevin is a Lecturer in Politics and International Relations at Monash University.